The trees are the main reason why you and I are still alive. It’s the only reason why humanity is at a point where it is right now. This article pays a tribute to several trees which have managed to survive and prosper over thousands of years. Here are selected some of the most impressive and interesting separate trees of the the world. These splendid trees are believed to be the world’s largest trees by volume. 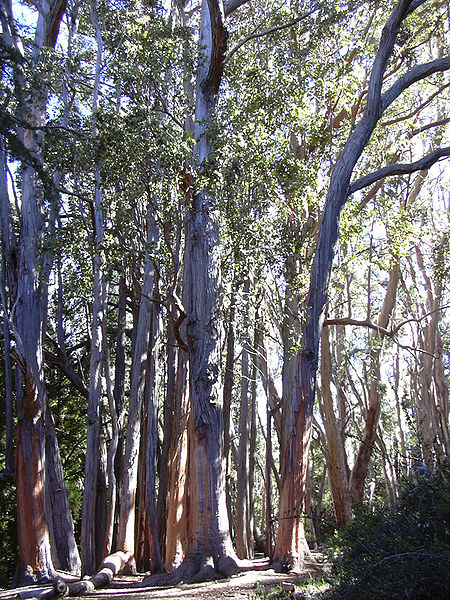 The largest Australian oak (Eucalyptus obliqua). It grows as a tree up to 90 metres tall, with a trunk up to three metres in diameter. It has thick, rough, stringy bark, and glossy green leaves from six to 22 centimetres long, and 1½ to 7 centimetres wide. It’s the 10th largest tree in the world by volume. It’s about 337 m³ (11,920 cu ft). 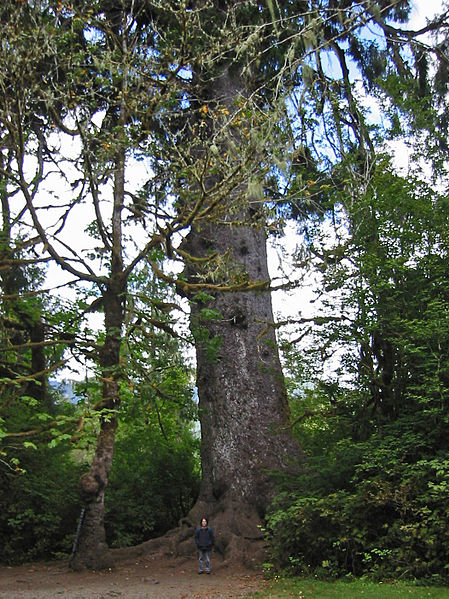 Queets Spruce is the largest Sitka spruce (Picea sitchensis ((Bongard) Carr.) in the world. It’s volume 337 m³ (11,920 cu ft) and height is 75.6 m. It is by far the largest species of spruce; and the fifth largest conifer in the world (behind giant sequoia, coast redwood, kauri and western redcedar); and the third tallest conifer species (after coast redwood and coast Douglas-fir). 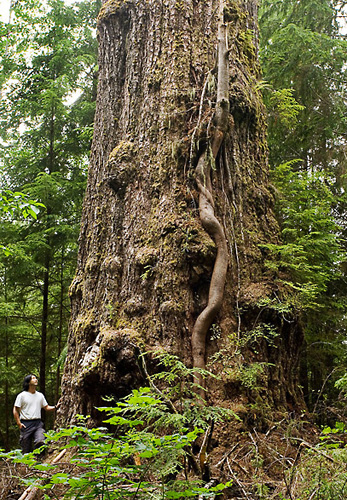 It is an evergreen conifer native to western North America from west-central British Columbia, Canada southward to central California, United States. It’s the 8th largest tree on earth by volume, about 349 m³ (12,320 cu ft), and maximum heights of 100–120 metres (330–390 ft). 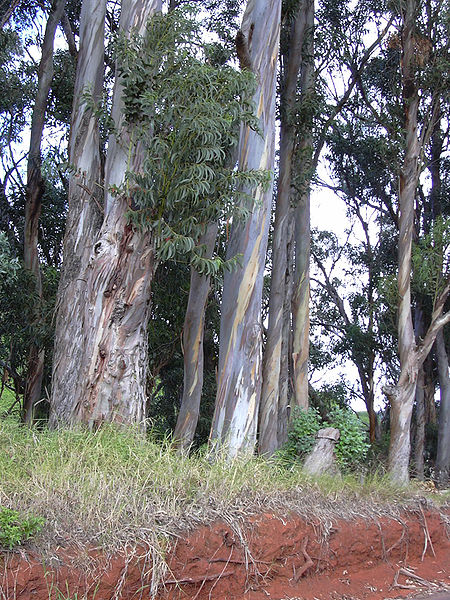 The largest eucalypt and largest Tasmanian blue gum in the world. Rullah Longatyle is an evergreen tree, one of the most widely cultivated trees native to Australia. The tree is about 368 m³ (13,000 cu ft) in volume and 90.7 m tall (297 ft) in height. 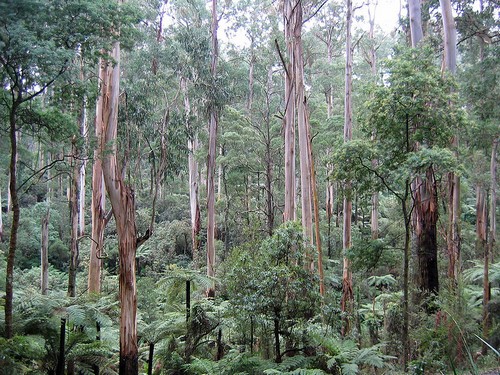 An evergreen tree, Eucalyptus regnans, commonly known by the names giant ash, mountain ash, or Victorian ash, is a species of Eucalyptus native to southeastern Australia, in Tasmania and Victoria. Historically, it has been known to attain heights over 114 metres (374 ft) making it one of the tallest tree species in the world and the tallest flowering plant. With 391 m³ (13,808 cu ft) in volume, it’s 6th largest tree on earth. 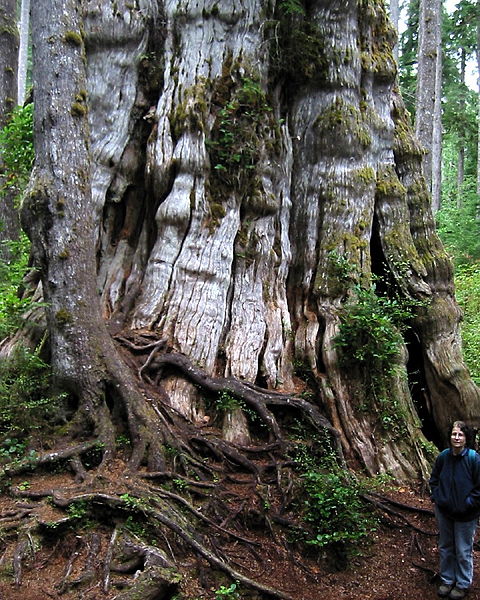 The “Quinault Lake Redcedar” is the largest known western redcedar in the world with a wood volume of 500 cubic metres (18,000 cu ft). Located near the northwest shore of Lake Quinault north of Aberdeen, Washington, about 34 kilometres from the Pacific Ocean, it is one-third the volume of the largest known tree, “General Sherman”. The Quinalt Lake Redcedar is 55 metres (180 ft) tall with a diameter of 6.04 metres. 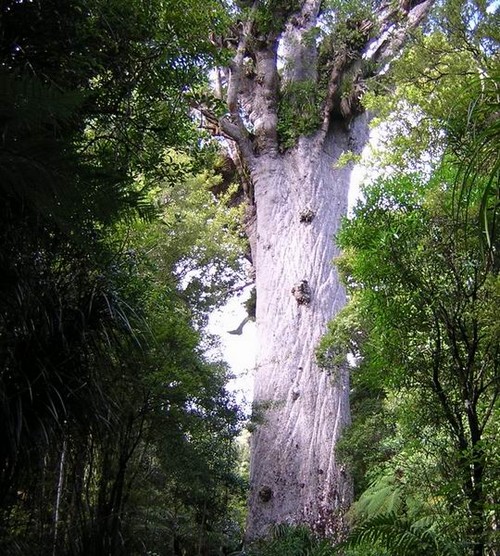 With 516 cubic meters in volume, Tane Mahuta is the world’s fourth largest tree by volume. Tāne Mahuta is a giant kauri tree (Agathis australis) in the Waipoua Forest of Northland Region, New Zealand. Its age is estimated to be between 1,250 and 2,500 years. It is the largest kauri known to stand today. Its Māori name means “Lord of the Forest” from the name of a god in the Māori pantheon.

El Árbol del Tule (Spanish for The Tree of Tule) is a cypress tree located in the town center of Santa María del Tule in the Mexican state of Oaxaca. The town was actually named after this tree. At approximately 1,400 years old, this tree is believed to have the widest tree trunk in the world, with a diameter of 11.62 m (38.1 ft). The third of largest tress is about 25,000 cubic feet (750 cubic meters) in volume. 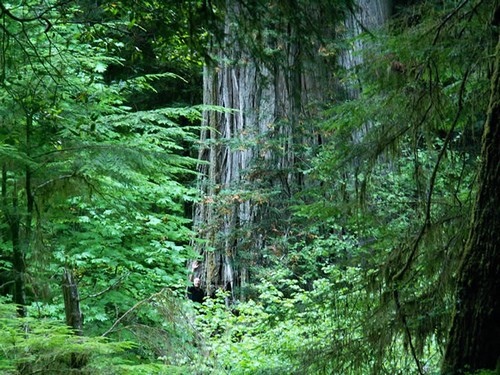 Lost Monarch is the Coast Redwood (Sequoia sempervirens) tree in Northern California that is 26 feet (7.9 m) in diameter at breast height, and 320 feet (98 m) in height. It is the world’s largest coast redwood in terms of wood volume. The tree is about 42,500 cubic feet (1,203 cubic meters) in volume. 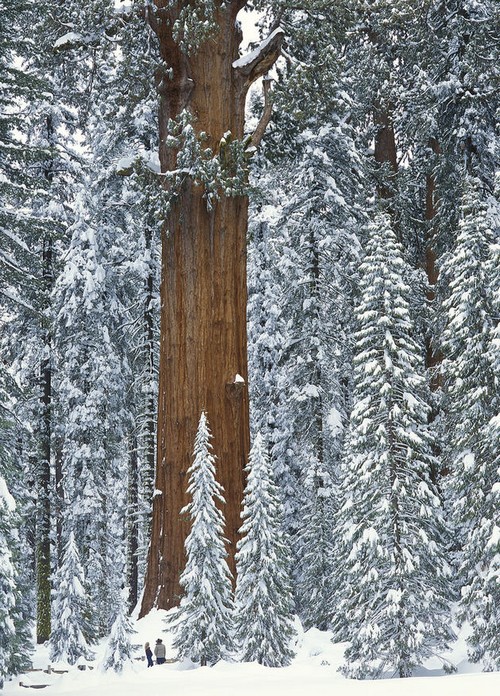 The General Sherman is a giant sequoia tree is found in California’s Giant Forest of Sequoia National Park. It is believed to be the world’s largest known living single stem tree by volume. The tree is about 52,500 cubic feet (1,487 cubic meters) in volume. The estimated age of this tree is around 2,300-2,700 years old. It has survived multiple fires, climate change and – thankfully – the modern-day man.

Please note! This list is far from final truth as there might be numerous other tree species with volume above 300 m³.