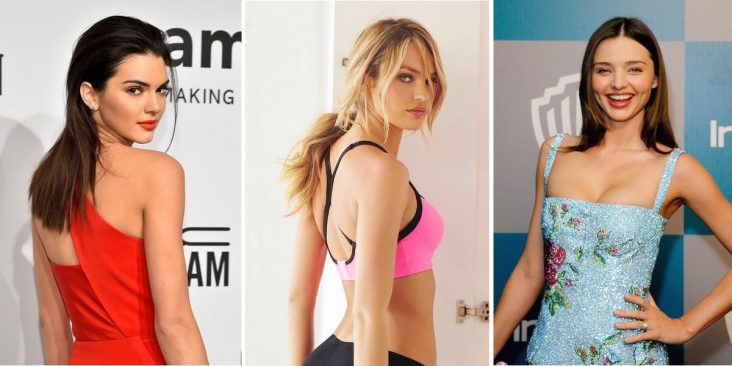 Modelling is a tough industry that keeps the people involved on their toes. But it can be highly rewarding too. If one is able to grab enough exposure and a few great deals, the industry will make you super rich. There are even rags to riches stories in this industry. Here, take a look at the 10 highest paid models in the world 2020.

World’s top 10 Highest Paid Models of 2020 are listed below:

At number 10 of the highest paid models of 2020 is Doutzen Kroes – A Dutch model and actress. When she was young Kroes aspired to be a professional speed skater. When a little older, she went to work for Paparazzi Model Management in the Netherlands who sent her to New York City. From then on she has never looked back. Kroes currently works with L’Oréal and has featured on the covers of Time, Seventeen, Marie Claire, Glamour, Vogue, Harper’s Bazaar, W, Elle, Dazed & Confused, Avantgarde, and Numéro. Kroes is also a former Victoria’s Secret Angel. She actively supports international initiative Dance4life.

The youngest member of the list of highest paid models. The 22-year-old Hadid is the face of Dior beauty, Bulgari and Tag Heuer. Ads are still standard fare—but increasingly, posts to her 21.7 million Instagram followers are what brands now find more valuable.

A runway expert, the Puerto Rican star walks in more shows than her fellow list members, and still finds time to shoot campaigns for Estee Lauder, Moschino fragrances and more.

At the tender age of 22, Gigi has became one of the highest paid models with an estimated earning of $9 million. Her ascendance on the list is partly owing to deals with Maybelline, Tommy Hilfiger, BMW, and Topshop. Ranked amongst Top 50 Models at Models.com. In addition, she was named International Model of the Year 2016 by the British Fashion Council.

Perhaps something of a surprise. At number 6 of the 10 highest paid models of 2020 is Cara Jocelyn Delevingne. She’s currently focusing on her film work, but, still immensely popular in modeling industry. With a dedicated Instagram following of 34 million, making her one of the most popular, if not the biggest earner this year.

Delevingne is a fashion supermodel, actress and singer. She made her modelling debut at age ten then in 2009, after leaving school, Delevingne signed with Storm Model Management. Delevingne won the “Model of the Year” twice in 2012 and 2014 at the British Fashion Awards. Cara has appeared in shows for houses like Dolce & Gabbana, Burberry, Mulberry and Jason Wu. She has acted in films like Anna Karenina (2012), Paper Towns (2015) and Suicide Squad (2016). Among AskMen’s ‘Most Desirable Women’, Delevingne ranked 13th.

Although retired, Gisele Bundchen once again reigns top amongst the highest paid models. All hail the reigning Queen of wealthy supermodels. For over ten years Gisele has presided over the top of the list.

Gisele Caroline Bündchen is a model, actress, and producer from Brazil. Bündchen began her rise as a model in the 90s. By 1999, she is credited with ending the “heroin chic” era of modelling. Sometimes called the only remaining true supermodel today, Bündchen pioneered the “horse walk” and was part of Victoria’s Secret Angels from 2000 to mid-2007. As an actor she has played a supporting role in Taxi (2004) another supporting role in The Devil Wears Prada (2006). Bündchen has for long been associated with many charities like Doctors without Borders and Save the Children, Red Cross.

Thanks to her giant social media presence, the former Sports Illustrated cover star has branched out beyond modeling into a line of cookware, a second cookbook and hosting television show Lip Sync Battle.

One of the most beautiful girls in the world right now. Kendall comes at number 1 amongst the world’s highest paid models. Her ‘ ballet skills ‘ may have recently come under fire but hey, Kendall has netted herself $10 million during last year. We doubt she’s bothered about the haters. She’s one of the most followed girl on Instagram. Check her @kendalljenner.

The longest-running angel in Victoria Secret history, Brazilian super model comes second amongst highest paid models in the world as of 2018. Since 2000, Lima has been a spokes model for Maybelline cosmetics and of Super Bowl and Kia Motors commercials from 2003 to 2009. She is best known as Victoria’s Secret Angel. Lima began thinking about modelling when she won a beauty pageant in elementary school. Then at the age of 15, she participated in the Ford’s “Supermodel of Brazil” competition. Following which she came second at the Ford “Supermodel of the World” competition. Next she moved to New York City and signed with Elite Model Management from where her career just took off.

She was spotted by a model scout at 15. She has appeared in numerous covers of Elle, GQ, Harper’s Bazaar, i-D, Lush etc. Swanepoel has appeared in advertisements for Jason Wu, Prabal Gurung, Jean Paul Gaultier, Christian Dior among other. Today she is best known for modelling for a Victoria’s Secret Angel since 2010. Swanepoel actively supports the charity Mother2Mother that works towards eradicating HIV from the lives of mothers and children in Africa. She’s ranked one of the most beautiful women of the year.

The Chinese fashion model, Liu Wen has the face and the body; Her steady contracts with Estee Lauder and high end clothing brand La Perla make her one of the world’s highest paid models. She is the first model of East Asian descent to walk the Victoria’s Secret Fashion Show. Catch her on Instagram here.liuwenlw

Australian super model retains high paying contracts with Wonderba and Escada fragrance. The 34-years-old also has a cosmatic line, Kora Organics, and a series of china and glassware with Royal Albert.

Miranda was the first Australian to participate in the Victoria’s Secret campaign in 2007. Kerr began modelling when she was 13. In 1997 she got her big break when Kerr won the nationwide model search by Dolly magazine and Impulse fragrances. Her winning stirred controversies about the effect of modelling and fashion on young girls who were the age of Miranda Kerr. Kerr is the author of a self-help book, represents an Australian department store chain called David Jones and had her own brand of organic skincare products called KORA Organics. She’s also ranked one of the most desirable women list.

Alessandra Corine Ambrósio is a Brazilian model and actress. Ambrpsio had started taking modelling class at the age of 12. When she was 14, Ambrosio gained recognition after 1996 Elite Model Look national competition. Ambrosio is currently one of the Victoria’s Secret Angels and was the company’s first spokesmodel for the “PINK” line. In the past, Ambrosio is also known to have modelled for Ralph Lauren, Armani Exchange, Next, Christian Dior etc. She has appeared in numerous international magazine covers and in advertisements for eminent brands. Currently Ambrosio serves as an ambassador for the National Multiple Sclerosis Society.