When new android devices and CPUs are released, benchmarking apps get a lot of attention, just as they also get the attention when a new phone is bought by users. Some are better than others, and numerical scores on a universal scale represent the real world performance one should expect from their device. Benchmarking apps are the best tools to compare the performance of Android devices for testing the overclocks or kernel changes on a device or testing the graphics rendering, to decide upon which product to purchase. These apps can test network performance, boot speed, gaming, processor, I/O, web browsing and graphics appeal for a multitude of devices and configurations. So, here is the list of Top 10 Apps to Evaluate Android Phones . 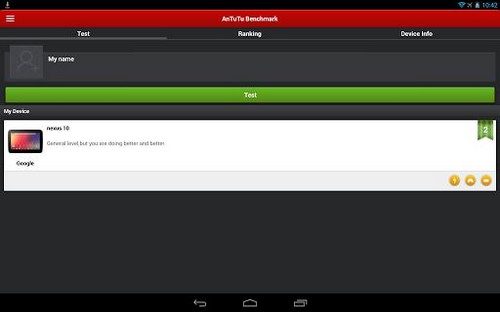 AnTuTu Benchmark is one the most popular benchmarking apps in the android world, used as an industry standard by leading technology companies and hardware review sites. This benchmarking app has already been used by more than 100,000,000 users and also during Google I/O 2014. With this Click and Go test suite, Antutu tests all aspects of an android device which are mainly focused on the performance of UX, GPU, RAM, CPU, and Input/Output. User Experience or UX calculates the overall device performance while in the CPU Tests Measures the power of the CPU. RAM and GPU test measures the performance of RAM and graphic processing respectively. But the score may vary slightly every time as Antutu can be influenced by the device temperature, running apps and more. 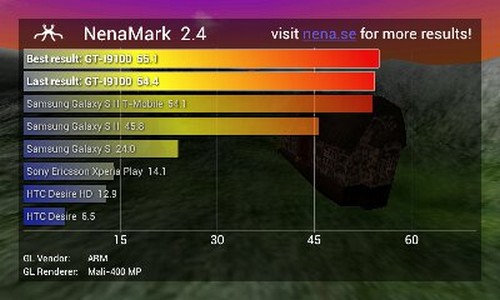 NenaMark2 is an OpenGL benchmarking app for high-end mobile devices with higher resolution graphics and advanced graphical effects. NenaMark measures performance using realistic scenes, and provides the performance score in frames per second, which can be used for realistic comparisons between different devices. It tests with the effects of Skeletal Animation for matrix animation, Morph Target Animation for blend vertex sets, Water for reflections and Fresnel effect, the Cloud and Smoke System for advanced particle system and Dynamic lighting for diffuse lighting per vertex. It also uses Map Reflections without dynamic cube map generation for checking the performance of rendering. 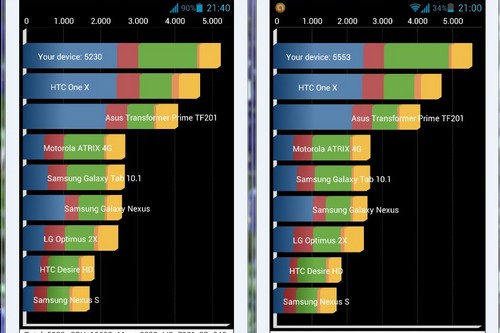 The Quadrant is a CPU and graphics benchmark which requires an Internet connection to compute benchmark results, and it is supported by ads. Quadrant tests the performance of CPU and its arithmetic operations, XML parsing and multimedia decoding while the I/O performance test rely on file system access and database operations. Performance of 2D graphics and 3D graphics can also be calculated with OpenGL single-pass and multi-pass rendering with stencil buffers. This application does not work on devices without a GPU like Spica, Tattoo, etc. The makers already declared that this benchmarking application may not be used for commercial purposes. 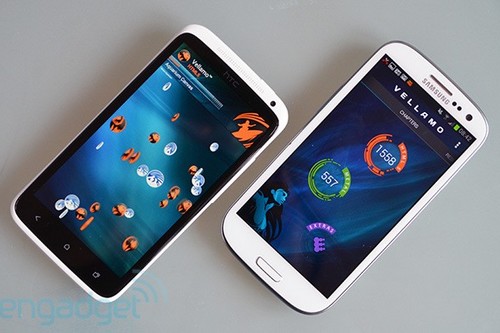 Vellamo is an easy-to-use suite designed of system-level benchmarks for devices based on Android 4.0 or higher. This app includes three primary chapters. The HTML5 Browser Chapter evaluates the performance of mobile web browser; the Multicore chapter measures the synergy of multiple CPU cores, and the Metal Chapter measures the CPU subsystem performance of mobile processors. It is designed to test the performance of UX, 3D graphics, memory read/write and peak bandwidth performance. The HTML5 Chapter is a set of system-level web browsing tests including graphics rendering and JavaScript to pixel blending and network stack performance. The Metal Chapter is a set of discrete lower-level benchmarks around the CPU, which includes CPU performance on integer and floating point operations. 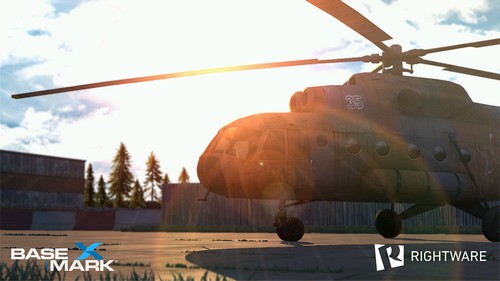 Basemark X by Rightware is a benchmarking app for objective cross-platform comparisons between Android, iOS and Windows Phone 8 devices for hardcore gaming. It features heavy graphics content which pushes tested devices to the limit. It built on top of a real-world game engine Unity 4.2.2 which reflects the real-world graphics performance of smartphones and tablets when rendering future 3D games. Options are there to choose either medium or high quality to run the benchmark according to the specification of the device. In the end of the tests, Basemark X produces a high quality and objective score which can be compared against the scores of other devices on Rightware’s official database called Power Board. 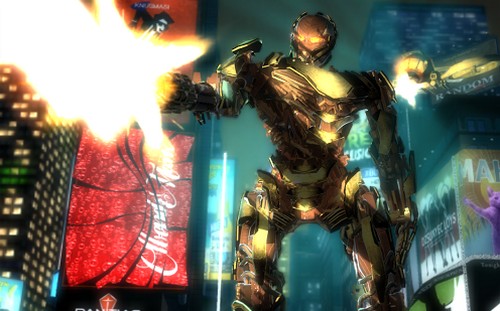 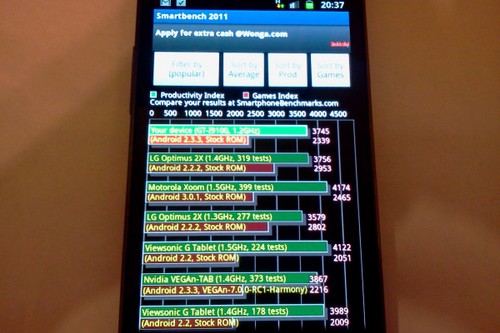 Smartbench is a multi-core friendly benchmark application that measures the overall performance of android devices. It reports both Productivity and Gaming Index to suit both productive users and 3D gaming users. This app puts heavier load on each test to accurately evaluate the performance of the device, as it is all prepared for the quad-core smartphone world, and unfortunately, it runs slower on older devices. The new version also comes with high polygon objects count and 3D rendering test. It also detects high-resolution screens, and uses them appropriately for the purpose of evaluating. For new and existing Smartbench Donate users, it gives some additional features like no ads, entire results history, and also features result chart without running the test first. 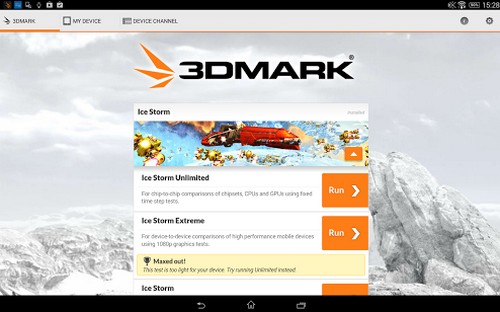 3DMark 1.3 is a cross-platform benchmarking apps which compares the performance of the android device with phones and tablets running iOS, Windows or Windows RT. It comes absolutely free with no in-app purchase or restriction option. 3dMark is built on Ice Storm, an OpenGL ES 2.0 benchmark that evaluates using fixed off-screen rendering at 720p then scales the output to fit the native display resolution of android. Ice Storm platform includes two graphics tests, designed to stress the GPU performance and a physics test to stress CPU performance. Ice Storm Extreme raises the off-screen rendering resolution to 1080p and uses higher quality textures and post-processing effects in the graphics tests to create a more demanding load for the latest smartphones and tablets. 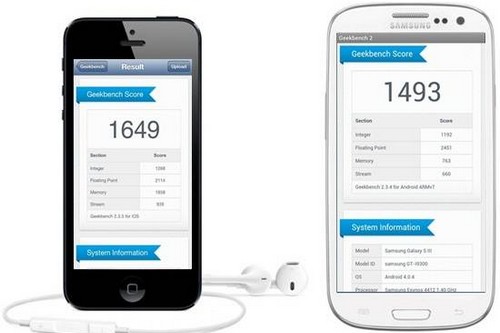 GeekBench 3.1 is a popular cross-platform benchmarking app which includes several new tests designed to simulate real-world scenarios to measure android mobile processor performance quickly and accurately. Every test in Geekbench 3 is multi-core aware which allows Geekbench 3 to measure the full potential of device’s processor and also reports performance as separate single-core and multi-core scores that figure out how the device will handle apps. It is very easy to use app mainly to evaluate machine’s processor and memory stacks up. Its web-based Result Browser makes it easy to keep and access benchmark results from anywhere. But the Result Browser can get a bit clogged after intensive use. 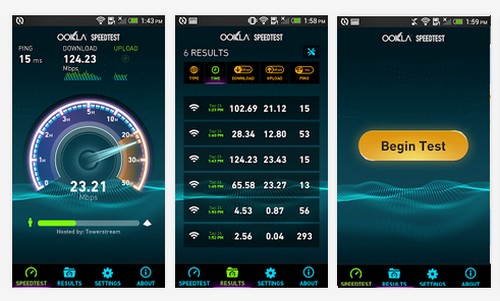 This benchmarking app designed by Ookla is attached with Speedtest.net, a widely known and one of the most used networking test engine for desktop and laptops of millions of user. It is a very easy to use app for evaluating the hardcore network performance of android devices. It provides accurate one-tap connection testing in less than 30 seconds because of its global network. Also, it evaluates and gives accurate result of Download, Upload and Ping on the device. This app also comes with Real-time graphs which show the connection consistency of the device, as it also troubleshoot and verify the promised network speed. Tracking past tests with detailed reporting and sharing the results are two of the best feature of this app.

Many other apps are also there in the market for evaluating accurate performance of the device. As we know, most of the flagship phones from different brands are judged by the result provided by benchmarking apps. Whether for the purpose of gaming quality, or to evaluate CPU and memory performance, these apps are handy and a must use for any android device user. Here are some other great lists, you may also like; 10 most expensive mobile phone, and 10 best iPhone Apps for students.

Top 10 Most Expensive Apps in the World

10 Most Weird Looking Phones Ever Made

10 Most Unique Smartphones in The World