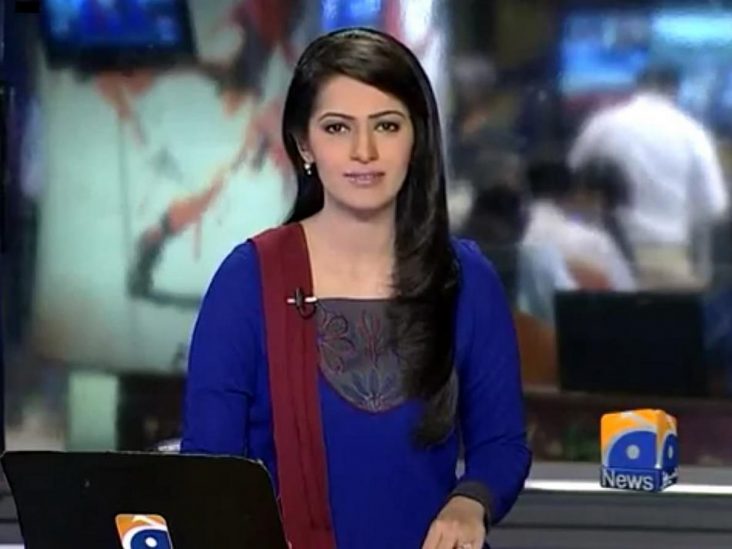 Immense hard work, naturally equipped skills and a real beauty, that is how we define the famous news anchor Quratulain Hassan. She is more than that and we are pretty sure about it. Hassan has a successful career in her favorite field which is every person’s dream. She is summed as one of the best news anchors of Pakistan. She has gathered a great deal of admirers now and will still continue to do so. This gorgeous lady belongs to Karachi, the city of lights. Hassan mesmerizes the whole audience with her soft but strong voice.

Farah Qadri has been associated with the broadcasting industry since 2007 and has worked for reputable news-networks of Pakistan. She has been associated with print-media and has worked with a renowned English News paper of Pakistan. Farah is currently working for CNBC Pakistan. She has well rounded experience of the news media industry, from the bottom up, and has reported on a diverse range of stories from all around the country during one of the most turbulent periods in its history. This experience has provided her with invaluable insight into the lives of ordinary people and the myriad problems faced by Pakistan.

Sara Alfred is from Karachi, Sindh. She is an honored and a remarkable newscaster and a host. Sara has worked for one of the best news channels of Pakistan, namely Geo TV etc. She has a never-ending fan base because of her beautiful looks and her cute way of presenting the news. She is always there during the important bulletins with a sweet smile. Sara has worked for Geo TV, Dunya TV and Aaj TV. It all started from Geo TV. That’s where she started her career. She firstly worked as a news anchor. She becomes a favourite among the news viewers there. This led to an offer by Dunya News and she joined them.

Iqra Shahzad is one of the renowned names in Dunya News. She is a well-known news anchor of Dunya News before joining it she host many programs of PTV including Sunday Hobbies, HEALTHY Morning, HOBBIES, MAST Muzic and many Talk shows.

Samina Ramzan is a news anchor and a producer. She is one of the few female newscasters and anchors who are flourishing in this field even after they have tied their knot and have married. She has worked for one of the best news channels of Pakistan. Namely, they are Waqt News channel, Geo News, Samaa TV and Dunya News. She is from Lahore, Punjab. She is a humble and an upright person.

Sadaf Abdul Jabbar is a famous newscaster and a host of Pakistan. She is one of the young female news anchors of Pakistan which are leading this profession with a strong fist. Sadaf has a relatively a large fan base for her fresh and new style of presenting the news. She is one of the few news anchors who are committed to only one news channel. Sadaf is from Karachi, Sindh. She is currently hosting ARY’s show “Ab Tak”.

Gharida Farooqi was a newscaster and anchor person on Geo news. She has joined Samaa TV as newscaster and program host. Farooqi left Geo after getting attractive package and program offer from Samaa. She is currently hosting a political debate show”60 Minutes” on Samaa TV. Gharida is an outstanding and bold anchor person. She has hosted multiple shows in which she performed very well.

Maria Memon is a newscaster and anchor person in Geo tv. She is talented confident and beautiful girl in media.Maria has been working for geo tv since 2008 and now she is top of the anchors. She is graduated in software engineering but she wanted to be a doctor. After graduation she started to work as an HR consultant and joined Geo tv b as a program coordinator for Geo English but the project she assigned got cancelled.

Later the bureau chief of Geo tv sent her to the news room from where she started her journey. Christiane Amanpour (CNN anchorperson) is her favorite anchor person she is someone to whom she look up to. She do follow her work and some day she wish to do glorious job like her. Initially Maria hosted the program ” Mere Mutabiq” actually that program gave her confidence to prove her skills in media.

Ayesha Bakhsh is one of the renowned anchors of one of the top-notch and leading private news channel of Pakistan “Geo News”. Bukhsh was born on 4 July 1981, in District Lahore, Punjab, Pakistan. She is the daughter of Mian Mohammad Bakhsh and Rubina Bakhsh. She studied at Fatima Jinnah Women University, Rawalpindi and was granted masters degree in Communication Sciences. Before working for Geo news she worked as an anchor on Ary news.

Later on in January 2007 Ayesha joined Geo Television and is currently Pakistan’s Geo TV’s Senior Newscaster. Her first appearance on television as an anchor was on Geo’s programme, “Nazim Hazir Ho.”. She also hosted “Crisis Cell”, “Aaj Kamran Khan Kay Saath” and “Laakin” in absence of their permanent hosts. In 2012, She won the Best News Caster Female at 3rd Pakistan Media Awards.

Sana Mirza is a renowned anchor of a Geo News Pakistan. She is herself a working journalist and news gatherer along with a contributor in compiling the script to be delivered in a news bulletin. She Started part time job from a FM radio in 2003-2004 then she worked a different channels as an anchor an as a producer as well. Professionally Sana Mirza is an MBBS doctor.

She is among one of the preeminent news casters currently working in Pakistan. She is famous for her powerful voice, nice appearance, the way she reads news (face, eyes and hand movements), graciousness, self-confidence (the way of talking with journalists, politicians and other personalities) and stunning smiles. Mirza is a combination of confidence and success and is now an eminent face of television. Initially she started her carrier as a radio jockey for FM 100 and came out with great achievement. Afterward she worked for different TV channels before lastly settling with GEO News.

The information of these Pakistani female news anchors is taken from pakistanmediaupdates.com and urduwire.com.

See also; Most beautiful news anchors in the world.