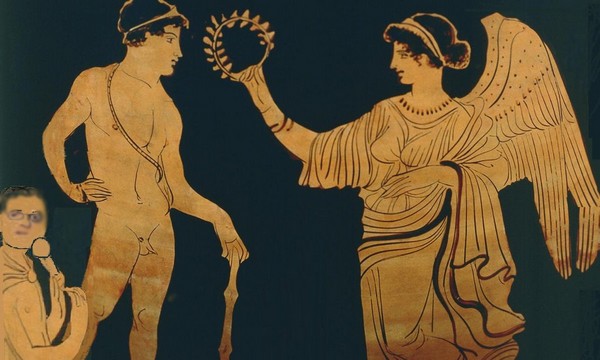 Most Celebrated Sportspersons of The Ancient Olympics
Advertisement

Every athlete dreams of participating in the Olympic Games. It is undoubtedly the most prestigious event in the field of sports across the globe with a history of 12 long centuries. The first event is traditionally dated to 776 BC and was held in Olympia, Greece.

The Ancient Olympics differed from our Modern Day Olympics in several ways. They were given a mythological origin by the Greeks. Besides an athletic event, it was also an important religious celebration held in the honor of the Greek God Zeus. There were fewer events and the prizes for the victors were olive leaf wreaths or crowns.

The achievements of a few legendary athletes in antiquity are so extraordinary that they are remembered even today, hundreds of years after their deaths. Listed below are Top 10 Celebrated Champions of the Ancient Olympics along with some fascinating stories, records and facts.

Onomastos was the first ever Olympic victor in boxing. The sport was introduced at the 23rd Olympiad in 688 BC. According to historians, he was also the one who wrote the rules of the Ancient Greek boxing. With four victories to his name, Onomastos holds an unbroken record of “the boxer with the most Olympic boxing titles” till date.

Orsippus was a famous Greek runner from Megara. He rose to fame as “the first to run the footrace naked at the Olympics” and also “the first of all Olympic victors to be crowned naked”. He won the stadion race of the 15th Ancient Olympic Games held in 720 BC. That was when the Greek tradition of athletic nudity (gymnos) was introduced and adopted as well.

Euryleonis was a celebrated woman charioteer. She won the two-horse chariot race of the Ancient Olympics in 368 BC. She was a wealthy princess and a passionate horse breeder.

Euryleonis was the second female crown-bearer in the Olympic history. Her predecessor, the Spartan Princess Kynisca, had won the four-horse race 24 years earlier.

A statue of Euryleonis was erected at Sparta. It is one of few bronze statues that survives anywhere in the Greek world.

The Greek Princess Kyniska is the first woman in history to win at the Ancient Olympic Games. Her chariot won in the four-horse chariot race in the 96th and 97th Olympiads (396 BC and 392 BC respectively).

Kyniska was born around 440 BC to the King of Sparta, Archidamos. Kyniska is said to have been a tomboy, an expert equestrian and very wealthy- the perfect qualifications for a successful trainer. She was exceedingly ambitious to succeed at the Olympic Games.

Traditionally, women were not allowed to take part in the Olympic Games. However, they could enter the equestrian events by owning and training the horses. Her brother, Agesilaus, the later king of Sparta encouraged her to participate. She employed men and entered her team at the Olympics.

Kynisca was honored by having a bronze statue of a chariot and horses, a charioteer and a statue of herself in the Temple of Zeus in Olympia. It had an inscription written declaring that she was the only female to win the wreath in the chariot events at the Olympic Games.

Even until today, Kyniska is seen as a symbolic figure of the social rise of woman. Her success was the beginning of the movement to give them equal rights and opportunities.

His oldest son, Damagetos, won the pankration in 452 and 448 BC. Akousílaos, the second son, won the boxing in 448 BC. The two celebrated their victory by carrying their father on their shoulders around the stadium which was filled with cheering spectators. That time, one of the spectators shouted, “Die, Diagoras; you will not ascend to Olympus besides” meaning he has reached the highest honor possible for a man. Diagoras died on the spot, and has since been considered the happiest mortal that ever lived.

Diagoras’s daughter, Kallipáteira was the first lay woman to enter the Olympic stadium. Since women were banned from watching the Olympics, except the priestess of Demeter, she entered the stadium disguised as a man. When it was discovered, a law was passed that all future trainers should strip before entering the arena.

Melankomas was crowned Olympic boxing champion in 49th BC, and also was a winner in many other events. He was reputed to fight for two days holding his arms out without ever lowering them. Also, He attained his excellent competitive form through continuous and strenuous exercise.

He was admired for his unique boxing style. His movements were light, simple and fascinating. Melankomas remained undefeated throughout his career—yet he never once hit, or was hit by, an opponent. He would only defend himself from the blows of his opponents. Invariably, the opponent would grow frustrated and lose his composure. In this manner, he won the Olympic boxing tournament at the 207th Olympic Games.

Astylos was victorious in three successive Olympic Games from 488 to 480 BC, in the running events of stade and diaulos. He also won the hoplitodromos event- a running race with full armored suits. He won a total of six victory olive wreaths in three Olympiads.

In the 488 BC Olympics, he ran for his hometown Croton, whereas in the next two Olympiads, he chose to participate as a citizen of Syracuse in honor of the tyrant Hieron. His compatriots honoured and glorified him for his first victory. Despite a successful career, he had to face dishonor and defamation when his decision to play for Syracuse enraged the citizens of Croton. They expelled him and demolished his statue in their city. His family renounced him and his house was turned into a prison as a sign of disrespect. It is also said that Astylos was bribed by officials in Syracuse to compete under their name.

Theagenes was a successful boxer, pankratiast, and runner. Owing to his extraordinary strength and swiftness, he was believed to be the son of Heracles-a divine hero in Greek Mythology. He won the Boxing tournament in the 75th Olympiad (480 BC), and a title for pankration in the next. Altogether, he was said to have won over 1300 crowns for different contests at all of the Panhellenic Games.

A curious story is told by Pausanias, a Greek historian, about a statue of Theagenes made by Glaucias of Aegina. It was scourged by a man who had a grudge against Theagenes. One night, the statue fell upon this man, killing him. The statue was put on trial for murder and exiled by being thrown into the sea. It was later restored as the Delphic oracle had declared that the country would remain in a period of barrenness otherwise.

Leonidas of Rhodes was one of the most famous runners of antiquity. For four consecutive Olympiads (164-152 BC), he won all the three races, – the stadion, the diaulos and the hoplitodromos.

He was a versatile runner. The stadion and the diaulos were best suited to sprinters while the hoplitodromos required more muscular strength and endurance. As a victor in all three of them, he earned the title “Triastes” (tripler).

His lifetime record of twelve individual Olympic victory wreaths was finally surpassed in 2016 when Michael Phelps won his 13th medal for the 200-meter race in the 31st Modern Olympiad. Leonidas’s record lasted for 2,168 long years!

Milon is known to be one of the greatest wrestlers of all times. He was a six times Olympic wrestling champion. He first won in 540 BC, in the youth wrestling event, and then each time in men’s wrestling in the next five Olympics. Also, he won seven times in the Pythian Games, nine times in the Nemean Games, ten times in the Isthmian Games and innumerable times in other competitions. He boasted a physique and power so terrific that he was believed to be the son of Zeus.

Several anecdotes about Milon’s superhuman strength and lifestyle abound. He was said to eat more than eight kilograms of meat every day. Legends say, he carried his own bronze statue to its place at Olympia. He once carried a bull on his shoulders to the stadium where he slaughtered, roasted, and devoured it the same day. One report says, the wrestler was able to hold a pomegranate without damaging it while challengers tried to pry his fingers from it. He could also maintain his footing on an oiled discus while others tried to push him from it.

He was a student of the great mathematician and philosopher, Pythagoras. It was said that Milon had saved Pythagoras’s life when a pillar collapsed in a banquet hall and he supported the roof until Pythagoras could reach safety.

In contrast to his outstanding accomplishments, Milon died a sudden ignoble death. Reportedly, he was once walking alone through the forests. In an attempt to tear a tree apart his hands became trapped in a crevice in its trunk. He could not free himself and was devoured by a pack of wolves.

Milon’s legendary strength and death became popular subjects of art and literature. Milon was also a musician and a poet.

Author’s blurb: Apurva Dhage is a freelance writer. She is a passionate knowledge seeker and enjoys reading and craftwork during leisure. Feel free to contact. Email: apurvadhagewrites@gmail.com.