If you want to rule the world you need to have either big money or big brains. America has both; China is catching up with both. This disturbs the political situation and standing on the US which is “actually” on the verge of bankruptcy. 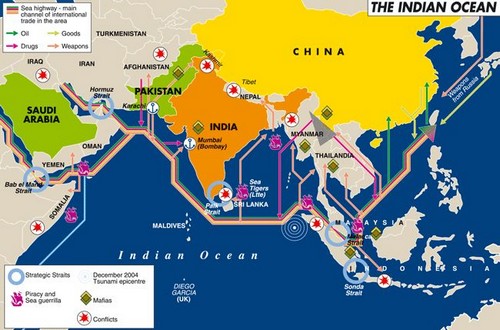 The Asian states are made up of mainland region of the peninsula and a network of archipelagos stretching from Indonesia to Philippines. These states are tied together by ASEAN (but quite loosely) as a single regional bloc. The major role in this bloc is played by China as it has both the bigger brains and the bigger economy that is required to rule.

9. The co-operation between the states

Regional disparity and differences in economy have limited the blocs power and made it more liable to cooperate with “outside powers” than become a unified powerful bloc in itself. This is where the U.S comes in with its ever green and timeless approach of “sympathy”, “reinstatement of sovereignty” and “creating a balance” within a region.

China has claimed a certain area of the South-China Sea on basis of its historical importance for their country (then a region of kings) through a nine-dotted area that they have drawn in the sea. It has played a slightly provoking role by claiming and taking Philippine islands and as of now it effectively controls Quirino Atoll besides the Scarborough Shoal that it claimed in 2012.

This instigates the U.S because the Philippines and the U.S signed a pact in 1952, under which the security of the islands is the responsibility of the U.S.

7. Importance of the South-China Sea

The Chinese economy is flourishing but it does so on an export based economy. Many experts have stated the peak to be temporary where the same kind of expansion was seen in Japan and now in Germany. China moves its goods all over the world through the South China Sea. Amongst the ASEAN countries, it aims to “divide and rule” by keeping the states at sufficient distance to prevent banding with each other and sufficient closeness to prevent outside intervention especially from the West. China hopes that the regional countries will accept its dominance in the region as inevitable if it provides enough incentives.

Though this disturbs the U.S, China is probably aware of the U.S reluctance to have a direct conflict with China in the sea. The former therefore takes full advantage of this and continues to expand within the sea, securing its trade route. Yes, it’s all about the bucks!

5. Involvement of the U.S Technological Giants

The technology giants like Google, Apple and IBM are “proven” to have been spying for the U.S through their indigenous technology. Chinese have therefore asked rather demanded a technological shift within the companies which has in turn made the companies turn their backs on the U.S government to a certain extent. Major contributors in the economy, these companies have enough bargaining power to express their concerns on U.S policy regarding Chinese.

The U.S has over 80 military establishments in seas worldwide. This is both a sign of power and a symbol of stubborn interference and paranoia. Yet, we believe when you are a superpower, there is a little that can be done against this. Chinese trade depends on seas primarily controlled by the U.S. Here comes the CPEC- The China-Pakistan Economic Corridor.

Chinese trade is vulnerable in the sea therefore Beijing sought to expand its trading through inland producers and trading partners over the land. Building an economic corridor through Pakistan is an example of this strategy. A century ago, Chinese were not seen as an emerging superpower but the South Asian states are changing and with them, the political and economical situation also changes as the states become more aware of the security challenges that they face.

2. The visits by Philippines and Malaysia

Chinese claims on the South China Sea are not just for the “trading route”. The claims take in areas that are rich is sea life and oil and gas reserves. The President of Philippines visited China recently and earned investment worth billions of Dollars for the Philippines by scorning U.S and praising China. He even refused joint military drills with the U.S and stated that the Chinese maritime presence is no longer harassing the fishermen.

The Malaysian President is bound to visit the PRC soon and in his Facebook status he mentions resolving differences on international disputes amicably. He also signed more than 10 agreements involving economics and defense during his visit.

According to the Chinese, its “claims are indisputable” and it vows to continue development by exercising its sovereign rights through the claims it makes. The situation is bound to change as time passes in the form of newer developments leading to betterment or in the shape of confrontations.