Carnivorous plants are among the fascinating members of the plant kingdom. They do not ‘eat’ living organisms literally, but trap preys, produce digestive enzymes and take nutrients after dissolving the prey. There are more than 600 recognized species of carnivorous plants, distributed across all the continents but Antarctica. They employ various kinds of traps, to capture preys including insects and small vertebrates. They include pitfall traps, fly paper traps and snap traps. Here is a list of 10 amazing carnivorous plants in the world. 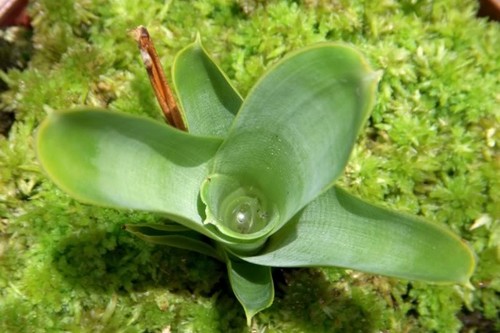 Native to South America, Brocchinia reducta is a carnivorous bromeliad. It can adapt to any environmental conditions. The plant captures prey with its leaves that overlap to form a water-storing cup. The leaves are coated with loose, waxy scales which reflect ultraviolet light. The water stored in the cup also produces a sweet odor, which along with the UV rays, attract ants and other insects. The insect once inside, gets slipped into the water and eventually drowns. The plant then begins digestion with the help of enzymes and bacteria. 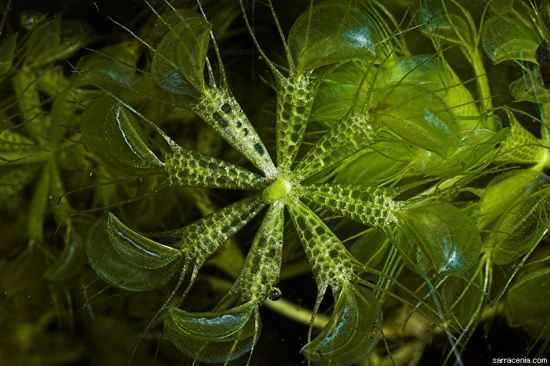 Popularly called Waterwheel plant, Aldrovanda vesiculosa, is the only existing species of genus Aldrovanda. It is one of the most widely distributed carnivorous plants, having presence in Europe, Asia, Africa, and Australia. The plant feeds on small aquatic invertebrates, and use traps similar to those of the Venus Flytrap to capture the prey. The trap consist of two lobes which are folded together underwater. There is a coating of sensitive hairs inside, which triggers the trap when coming to contact with the prey. The trap closes within 20 milliseconds, and the digestion begins. 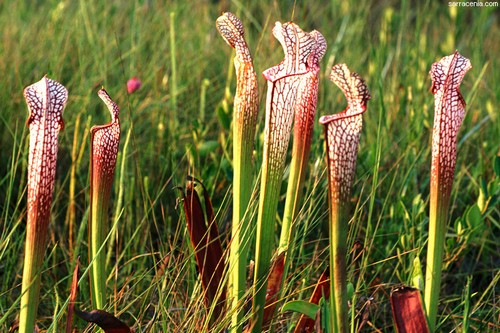 The genus of Sarracenia contains about 10 species of carnivorous plants, which are also known as North American pitcher plants or Trumpet pitchers. The plants are all native to North America. The plant use smell, nectar and colour to attract the prey into the pitcher. Once the insect is trapped, it finds it impossible to escape due to the slippery surface and the fine hairs in the tube. The pitcher contains fluid with digestive enzymes which drowns the insect and start digestion. A number of species have hoods above the pitchers to keep out rainwater. 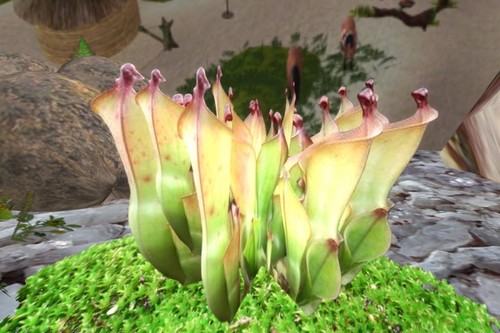 Commonly known as Sun pitcher plants, Heliamphora is a genus that consists of about 23 species of carnivorous plants, native to South America. The plants use pitfall traps to attract and kill the prey but need help of symbiotic bacteria for digestion. Their leaves are in the shape of tubes that contains water. When the prey falls and drowns in the water, the plant digests it with the help of bacteria. Most of the plants of this genus feed on ants. One species, Heliamphora tatei, stands apart as it produces its own enzymes for digestion and can trap flying insects. 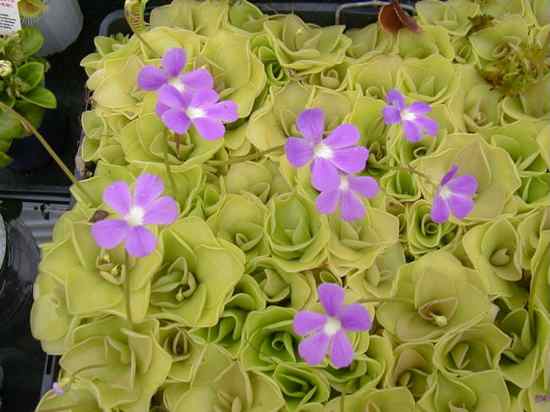 Populary known as Butterworts, Pinguicula is a genus of carnivorous plants consisting of around 80 species. They are mainly found in America, Europe and Asia. The trapping mechanism in Pinguicula is aided by two glands found on the leaves. The first one, named Peduncular gland, secrete a mucilaginous substance with digestive enzymes which forms droplets on the leaf surface. These droplets attract an insect and when it lands, the gland produces more mucilage which covers the insect. The digestion triggers the second type of glands, sessile glands, which produce enzymes that further break down the components of the insect. 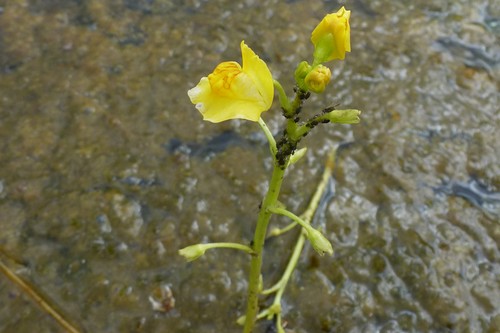 Most commonly called Bladderworts, Utricularia is a genus consisting of more than two hundred species of carnivorous plants. They have presence in every continent except Antarctica, in both terrestrial and aquatic types. Utricularia employs bladder-like traps to capture preys that include protozoa, mosquito larvae and fish fry. The trapdoors are connected to sensitive hairs. When they are triggered by the prey, the bladder, which is in negative pressure when compared to its surroundings, sucks the prey into itself. The whole activity takes place in a very small amount of time. 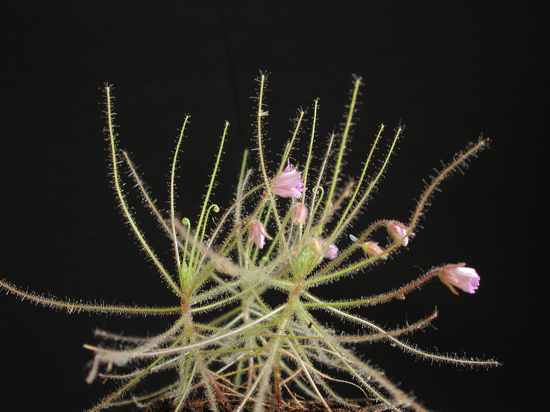 Native to Australia, Byblis is a genus of small carnivorous plants. Also known as Rainbow plants, they are small plants with a passive trapping mechanism. There are eight recognized species of Byblis. The leaves of the plant are covered with small glandular hairs which produce a kind of mucilaginous substance. This sticky fluid attracts flying insects, and when they land on the leaves, they get stuck to the leaf. Unless they are able to escape, the insects starve to death. The digestion is aided by the juices produced by sessile glands on the leaves. 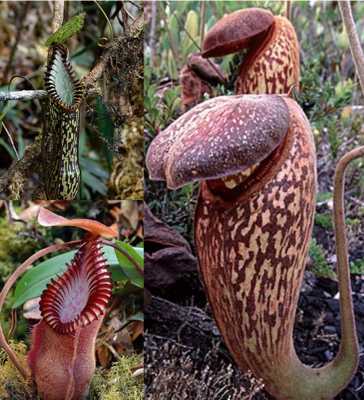 Also known as Monkey Cups or Tropical Pitcher plants, Nepenthes is a genus that contains around 150 different species. These plans are found in South East Asia, China, India, Madagascar, Seychelles and Australia. The name Monkey Cups comes from the fact that monkeys often drink water from the pitchers of the plant. The trap includes a pitcher formed at the tip of tendrils on the leaves. It contains a fluid, which is slippery, that drowns the prey. The down portion of the trap contains glands which absorb nutrients from the prey. The plants mainly consume insects, although the largest species are found to trap even rats and small birds. 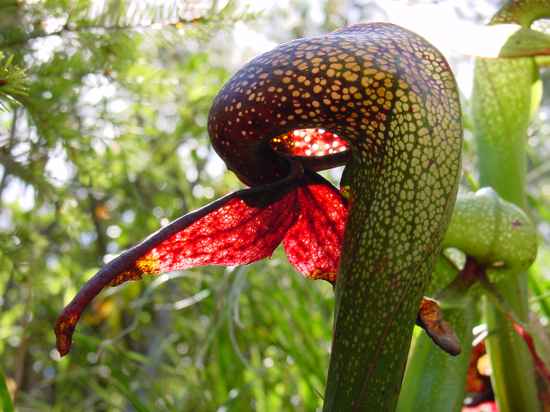 Also known in the names California pitcher plant, Cobra lily and Cobra plant, Darlingtonia californica is the lone species of genus Darlingtonia. This carnivorous plant, mainly found in Northern California, uses pitcher traps to capture prey. However, unlike other pitcher plants, the plant does not store rainwater but pump the water from its roots. In addition to the common parts of a pitcher trap, the plant has also many false exit points aimed to exhaust the prey. This technique makes Darlingtonia californica one of the most efficient carnivorous plants. 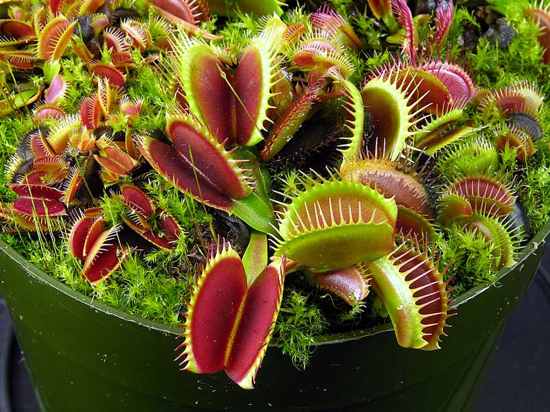 The Venus Flytrap, known as Dionaea muscipula in the scientific world, is perhaps the most famous of all carnivorous plants. The plant, native to Eastern coasts of United States, feeds on small insects. The trapping mechanism is triggered when the sensitive hairs on the leaves are stimulated. The leaves snap shut immediately. Once the prey is trapped inside, the plant digests and absorbs it. It takes the Venus Flytrap about 10 days to consume the prey completely. Very small preys can escape the trap, and it will reopen in 12 hours.