The universe is full of strangest of things. There are hypervelocity stars – which aren’t shooting stars, by the way – and dust cloud that tastes like raspberry and smells like rum. There’s much more that sounds absolutely out of the world (pun intended). And then there are planets that are outside the solar system, which are mysterious. These strange and mysterious planets outside the solar system have been discovered in the past decade or so, after Dr. Alexander Wolszczan discovered the first three in 1994. Let us take a look at 10 Strange and Mysterious Planets outside the Solar System.

The 10 Strange and Mysterious Planets in The Known Universe. 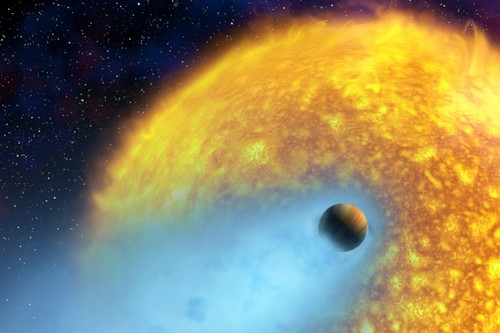 HD 209458 b, located 150 light years away from planet Earth, in the Pegasus constellation, and is the first exoplanet to be discovered in transit of its orbiting star. It is 30% larger than Jupiter, while its orbit is 1/8th of Mercury distance from Sun. Naturally, its temperature is extremely high: about 1832°F. This gas planet, under the extreme heat, and immense pressure, has faced evaporation of different atmospheric gases that stream escape its gravitational field, including hydrogen, carbon and oxygen. Surprised scientists classify it in a whole new planet classification called chthonian.

9. The Rock Showers of Planet 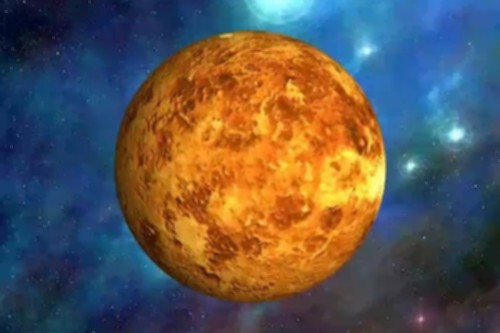 The CoRoT-7b is a strange and mysterious planet outside the solar system, and the first rocky planet discovered orbiting a star other than the Sun. It is believed to have been a giant gas planet initially, like Neptune or Saturn, but due to its proximity to its host, it gradually lost its gas and atmosphere layers. Since it is tidally locked, it always faces its star on one side where temperature is can be 4000°F, while the temperature on the side facing away is as about 350°F. The conditions lead to rock rain: vaporized rocks that fall as liquid rock rain, and solidify on the surface of the planet. 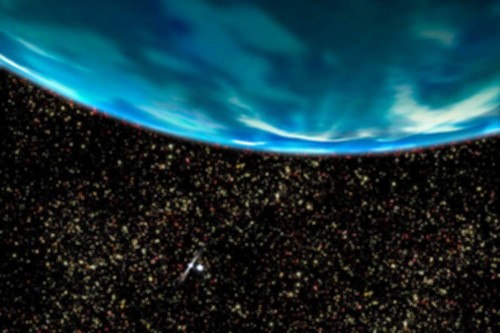 PSR 1620-26 b is probably the oldest planet of the universe, old enough to defy the traditional astrophysical models. It is triple the age of Earth, and is thought to be just a billion years younger than the universe itself, when traditionally, it is believed that planets cannot be as old as the universe, because, 13.8 billion years ago, at the time of the big bang, the materials required for a planet to form were not there in the universe, then. Methuselah orbits a binary star comprising a white dwarf star and a pulsar, amongst the globular cluster of stars in the Scorpius constellation.

7. The Planet from Hell 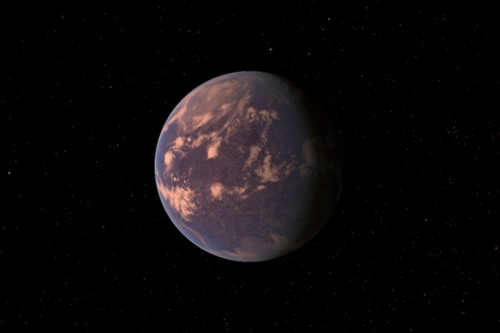 Gliese 581c is theoretically the most likely to support colonization, except it is one hell of a planet. It is tidally locked to always face the Red Dwarf star which it revolves around, on one side, and is at a distance such that standing on the star-side of the planet will melt you, while stepping on the dark-side will freeze you immediately. In the narrow habitable belt between the two extremes, there are other challenges. The sky is hellishly red since the planet is at the lower frequency end of our visual spectrum, while photosynthesizing plants are subjected to infrared radiation, thus blackening them. 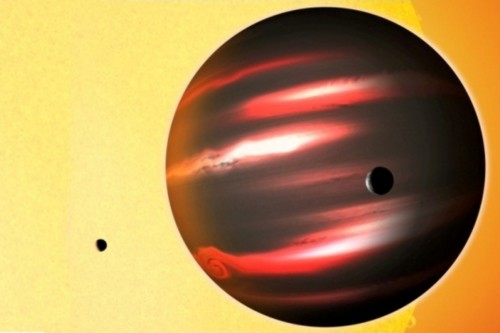 TrES-2b is a lot like Jupiter: they are both nearly the same size, and it orbits a star that is similar to the sun – except, it is some 750 light years away. This Jupiter-class gas giant reflects less than 1 percent of the light which strikes. In other words, it absorbs huge amount of light, so much so that it is considered the darkest planet. It is darker that black acrylic paint or even coal. It is speculated that the atmosphere of the planet has chemicals, or mix of compounds. Interestingly, at 1800°F, it turns hot enough to emit a dull, reddish glow, which is visible probably because of all the absorbed light. 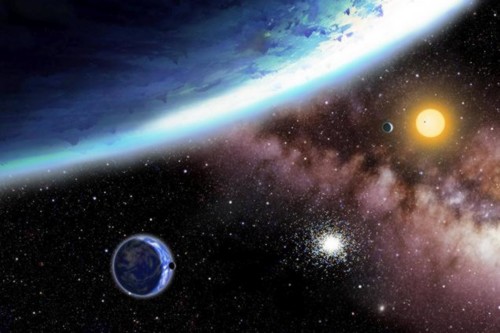 HD 106906 b is the “forever-alone guy” of planets as it hangs out, all by itself, in the Cruz constellation, revolving around its host star at a distance 60,000,000,000 miles, over 20 times the space between Neptune and the Sun. Located nearly 300 light years away from the Earth, the “Super-Jupiter” class planet which is above 11 times larger than the Jupiter, is thus too far away from the host to gather raw material needed for its formation. Astrophysicists hypothecate that it is a failed star, thus challenging the binary star theory, since it is too small for binary formations.

4. The Swelled Up Gas Planet 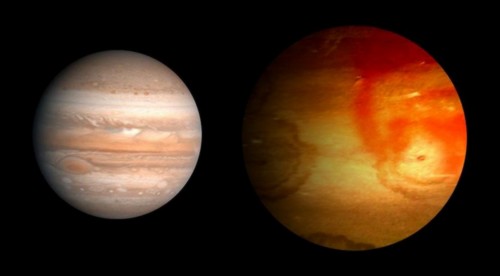 HAT-P-1 is a strange and mysterious planet outside the solar system, located 450 light years away, and has recently been discovered by the Harvard-Smithsonian Center for Astrophysics. Is a giant gas planet with a size about half of Jupiter, but the stunning fact about the planet is that, despite its size, it weighs about the same as only a cork ball. It is classified as a “hot Jupiter” planet, it is almost 25% bigger than models estimate, which confuses the astrophysicists, who are trying to find out why it is swelled up. Scientists suspect that it can float in water, and are curious to test how well it can do so.

3. The Planet with Enormous Planetary Rings 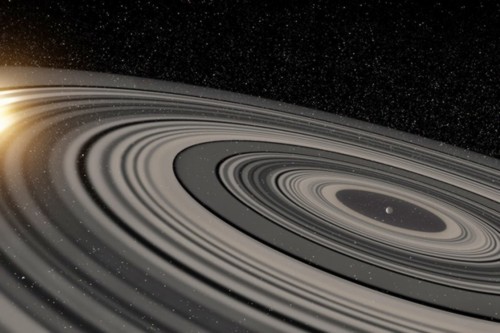 J1407 b has been discovered in 2012, and its data have been compiled and submitted for publication only recently. It is located 400 light years away from Earth. What is astounding about this planet is that it has a system of planetary rings, just like Saturn, and these rings are 200 times larger than the ones around Saturn. The rings are so big that if they belonged to Saturn, it would almost dominate the Earth’s sky, appearing larger than the Moon, and scientists also observed a 56-day eclipse of its host star. The gaps between the rings are believed to represent exomoons orbiting this exoplanet.

2. The Planet of Burning Ice 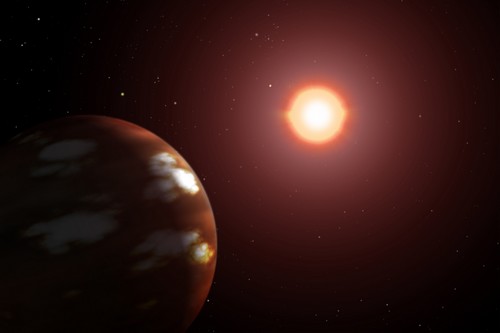 Gliese 436 b is another murderous planet under the Gliese catalogue. It about 20 times bigger that Earth, and is roughly the size of Neptune. The planet is 4.3 million miles away from its host star, in comparison to Earth which is 93 million miles from Sun. The temperature on the planet is 822°F, and its surface is covered with burning ice. The immense gravitational force of the planet keeps the water molecules too densely packed to evaporate, and thus, prevents them from escaping the planet. The burning ice is called ice-ten, with reference to ice-ten from Kurt Vonnegut’s Cat’s Cradle. 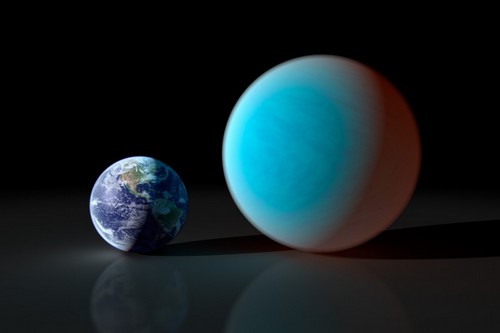 Discovered in 2004, 55 Cancri e, at twice the Earth’s size and eight times its mass, is called “Super Earth”. Aside from graphite and other silicates, its main component is diamond. It is made of crystallized diamond, with 1/3rd of its mass being pure diamond. Once a star in a binary system, its partner started eat at it, leaving only the gem core. Its temperature is 3900°F. Its Earth value is $26.9 nonillion, 384 quintillion times Earth’s GDP of $74 trillion. Mining only 0.182% of it would pay off the total debt of $50 trillion of all the governments in the world. They just have to travel 40 light years.

There are almost 2000 exoplanets in the universe that have so far been discovered. The remarkable features of many of these strange and mysterious planets outside the solar system often leave the world of science absolutely confounded, when fact about the universe and it hidden planets sound stranger than fiction.