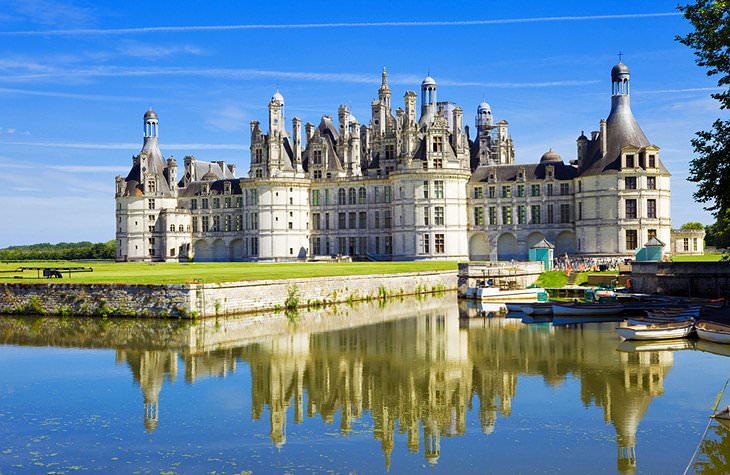 France has the most beautiful castles throughout the Europe. Here we listed our favorite, so romantic and dreamy, 10 best French castles to visit. You’ll definitely want to hit up one of these awesome castles during your trip to France. Have a look and enjoy!

This overly fortified castle of Foix is an important tourist site and known as a center of the Cathars. It was constructed during the Middle Ages and is known from 987. During the 1034, the castle became capital of the County of Foix and played a decisive role in mediaeval military history. During ensuing centuries towers were continually added in order to create a strong keep. The two square towers served as a political and civil prison for four centuries until 1862, were built before the 11th century. The most recent is the round tower, built in the 15th century. The castle has been listed since 1840 as a monument historique by the French Ministry of Culture.

Situated on the banks of the Rhone River, The Castle of Tarascon, by its remarkable state of preservation, the monument is one of the finest medieval castles in France and Europe built in the 15 th century by the Dukes of Anjou. The castle is amazingly compact architecturally, it completely surrounded by the River of Rhone. The Chateau is quite a apprehension sight, with unarticulated walls barely pierced to let the light in. The wall and towers, surrounded by a lush landscape and water, are the same height adding further to the solid appearance.

Truly a magnificent sight, Chateau de Vincennes, a massive 14th and 17th century French royal castle in the town of Vincennes, to the east of Paris, now a suburb of the metropolis. Like many other famous castles it had its origins in a hunting lodge, constructed for Louis VII about 1150 in the forest of Vincennes. It has amazingly spacious structure that consists of a strong keep adorned with corners made with rounded towers and surrounded by the thickest of perimeters.

Truly one of the most scenic structures in all over the Europe. The Mont-Saint-Michel is like its own city. Constructed during the 8th century, it is located on a rocky island off the north coast of France in Normandy. Its unique position of being an island only 600 meters from land made it readily accessible on low tide to the many pilgrims to its abbey. Equally, this position made it readily defensible as an incoming tide stranded, or drowned, would-be assailants.

Mont Saint-Michel (an island commune) is one of France’s most recognizable landmarks, and is a part of the UNESCO list of World Heritage Sites and more than 3 million people visit it each year.

This beautiful castle spot 6th amongst the 10 best french castles to visit. Chateau d’Usse, located at the edge of the Chinon forest overlooking the Indre Valley was first fortified in the eleventh century by the Norman seigneur of Ussé, Gueldin de Saumur, who surrounded the fort with a palisade on a high terrace. Because of the dreamy Flamboyant Gothic/Renaissance look of the castle, it is commonly referred to as the Sleeping Beauty castle.

Situated in the Centre Val de Loire valley in the town of Amboise. The castle was built in the late 9th century on a spur above the River Loire. During the reigns of Kings Charles VIII and François I (late 15th century), this medieval castle of Amboise was replaced by a royal residence. The chateau fell into decline from the second half of the 16th century and the majority of the interior buildings were later demolished, but some survived and have been restored, along with the outer defensive circuit of towers and walls.

The historic chateau, Château de Chantilly, located in the town of Chantilly, Paris. This beautiful chateau is made up of two attached buildings: the Petit Château built around 1560 for Anne de Montmorency, and the Grand Château, which was destroyed during the French Revolution and rebuilt in the 1870s.

The Chateau was originally built in 1528–1531 for the Constable Anne de Montmorency by Pierre Chambiges. There are many interesting pieces of history of 17th century are associated with the chateau. Every two years a spectacular fireworks competition, the Nuits de Feu, is held in the chateau gardens. This popular event brings many visitors in from the local area, from Paris, and from around the world.

One of the most famous and spectacular castles in the Loire valley. The chateau bears a proof to the enlightened way of life through its original design, its furnishings and its decoration, the wealth of its collections, but also when considering its fate, as it was loved, run and protected by exceptional women who made a mark on history.

The Chateau was built during the 11th century on the River Cher. It was passed through many hands before it was given to the Diane de Poitiers (mistress of King Henry II). Diane de Poitier saved the château from destruction during the French Revolution, preserving it from being destroyed by the Revolutionary Guard because it was essential to travel and commerce, being the only bridge across the river for many miles.

Château de Chambord is one of most fascinating chateau and the largest château in the Loire Valley. Situated at the heart of Europe’s largest enclosed wooded park, Chambord, it’s a marvel of the Renaissance period. It was built for King Francis I to serve as a hunting lodge and so that he could be closer to his mistress. It is one of the world’s most recognizable châteaux, because of its very distinctive French Renaissance architecture which blends traditional French medieval forms with classical Renaissance structures.

The Palace of Versailles is some 20 kms southwest of the French capital Paris. When the château was built in 1624, Versailles was a small village. Today, however, this area is a wealthy suburb of Paris. The palace was built as a small hunting lodge for Louis XIII, in 1624. Eight years later, he expanded it to chateau, and this structure became the core of the new palace. Later, his successor also had expanded it, that cause it to become one of the largest palaces of the world. This helped him fulfill his desire of establishing a new center for the royal court. Versailles is therefore famous not only as a building, but as a symbol of the system of absolute monarchy of the Ancien Régime.