Caves have appeared in works of fiction, time and again, capturing our fancy, with the secrets and treasures hidden in them and their mysterious locations and entrances. While Alibaba found his fortune with the magic cave that opened to the chanting, ‘Open Sesame!’, Harry Potter was faced with life-threatening objects and beings in the Crystal Cave. In the real world, there are many enthralling and amazing caves, too, and human beings have left their lasting footprints in such caves. Let’s read about some of the most fascinating Asian caves that define human history. 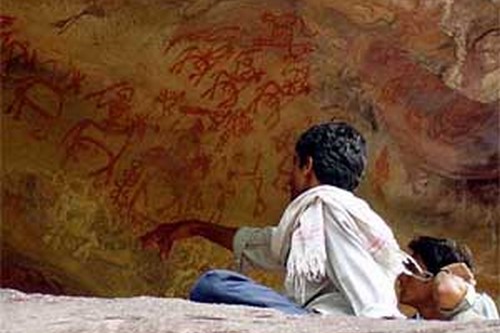 The Bhimbetka rock shelters, located in the state of Madhya Pradesh in India, are an archaeological site with traces of the earliest human life in India. Some of the rocks of the South Asian Stone Age have rock paintings about 30,000 years old. Covered in thick foliage and natural resources, walls of the caves and shelters bear paintings made with vegetable colours. The cave art displays figures of animals, humans, hunting scenes, weapons, communal dances, musical instruments, mothers and children, agricultural communities, religious symbols and deities, etc. The caves are similar to the famous Lascaux Cave of France, Altamira Cave in Spain, etc. 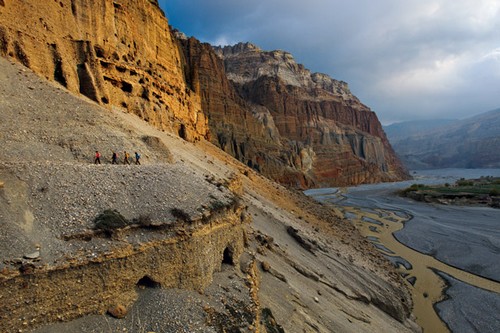 The Sky Caves in Nepal are called so for a reason: they are carved in the cliff in a gigantic Himalayan gorge, 155 feet from the ground. These caves are either dug into the cliffside or tunnelled from above. The number of caves is bizarre: there are 10,000 of these human-made caves, ensconced in the fragile, sand-coloured cliffs, and they look like a giant sand-castle, standing in the middle of a neighbourhood in the sky. Found in Central Nepal in the former Kingdom of Mustang, these caves are assumed to have been built thousands of years ago, but, who built them and for what purpose are still archaeological mysteries. Some of the caves have eroded murals on the walls. 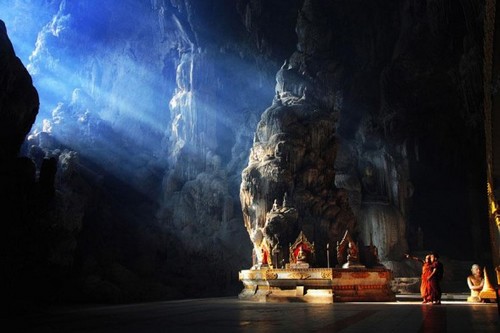 This quiet, mysterious cave in Myanmar has a Buddhist temple fitted inside. During the 13th century, the Kyaut Sae Cave was primarily used as a hiding spot by the locals from the Mongols of that period. But, now, the cave serves a different purpose. On the side of a cliff is the temple which is the entrance to the cave. It is used by the monks for the purpose of meditation. Time stands still in this beautifully peaceful cave. Although tourists are welcome here, very few actually choose to do so. Perhaps, it is for the best. The sanctity of a place so chaste should remain undisturbed. Very little is known about this beautiful cave. 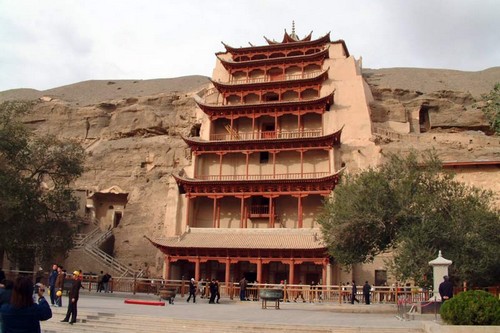 The Mogao Grottoes or Mogao Caves, also called the Caves of the Thousand Buddhas and Dunhuang Caves, are the most valuable repository of Buddhist art in the world. Its excavations have led to the discovery of more than a thousand temples, the first of which were built in 366 AD. There are 492 surviving caves that are now well-preserved for the frescoes and murals. These coloured sculptured figures ranging to more than 2000 in number, and five wooden eaves overhang the caves. It is an archive of about 50,000 scriptures, documents, textiles and other historical and religious relics. 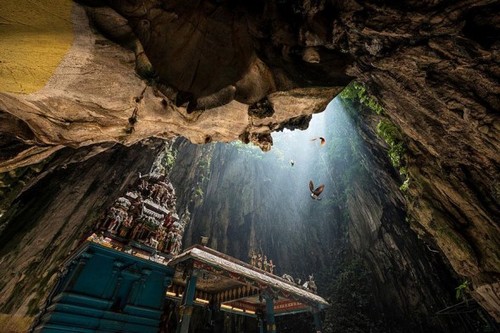 In the limestone hills of Kuala Lumpur lies ensconced a series of caves and cave temples called the Batu Caves, one of the most famous Hindu shrines located outside India. It is dedicated to Lord Murugan and is the main site for the Thaipusam celebration. The Temple Cave contains several Hindu shrines under a high-vaulted ceiling, with 272 concrete steps leading to this cave, and a gigantic murti of Murugan Swami. The three main caves and the other smaller caves, all filled inside out with religious sculptures and paintings depicting Hinduism, offers a humbling experience. 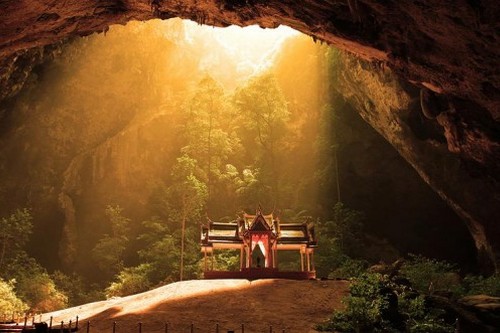 The Phraya Nakhon Cave in the Khao Sam Roi Yot National Park is an incredible cave, formed in the limestone hill of the region. The top of the structure has a natural skylight, due to the collapsed ceiling. Sunlight filters through this opening, illuminating the royal cave with two caverns. It was frequented by the kings for its exotic beauty. The Kuha Karuhas pavilion was built in the year, 1890, inside this cave for the visit of King Chulalongkorn. Many other kings have also visited this majestic cave since its construction, and have left their signatures on the walls of the cave. The air inside the cave seems to bear a sense of magnificence and grandeur. 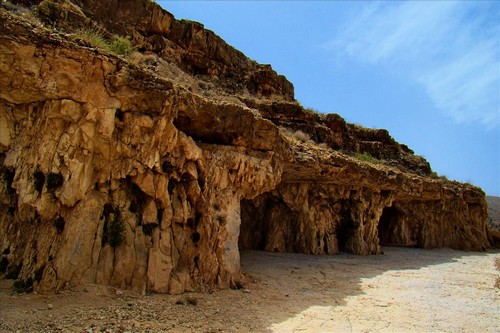 The Sangeshkan or Sang Shekanan Cave is located in the south of the city of Jahrom in Iran, near the Alborz Mountain. The cave was carved in the middle of the mountain by stone-cutters. But, they did not cut through mountains stronger than themselves with the intention for the caves to bear aesthetic values or for their own recreational purposes. They did so to be able to sell the rocks and stones. But, inadvertently, they gave birth to the largest handmade cave in the world, which can beat the City of Caves in Nottingham. This cave is one of the rarest and greatest feats of man in the history of ancient Iran. 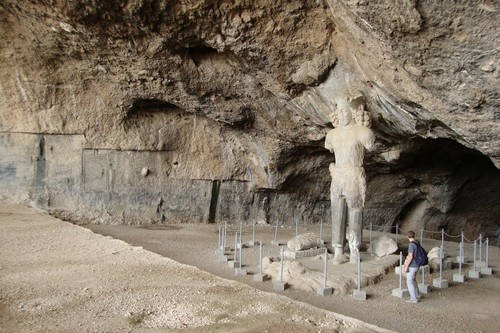 The Shapur cave is nestled in the Zagros Mountains in the south of Iran, a few kilometres away from the city of Bishapur. The cave with five terraces is home to the colossal statue of King Shapur I (AD 240 – 272) who was the second ruler of the Sassanid Empire. The 7m high statue was carved out of a single stalagmite, and it stood proudly until it was vandalized, about 1400 years ago, after the Arabs invaded Iran. For fourteen centuries, it lay on the ground, broken and collapsing, until, in 1957, Shah Mohammad Reza Pahlavi ordered the military men to raise it and mend its broken leg and arm. Within six months, the statue was brought back to its former glory that adorns the cave once again. 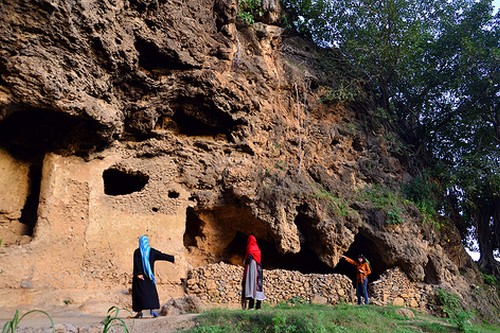 At the foothills of the Margalla Hills on the southwest of Islamabad lie, silently, the caves with Buddhist relics in the centuries-old Shah Allah Ditta village. Located next to the shrine and tomb of Shah Allah Ditta, these caves date back to the 8th century and contain murals of Buddha on the walls, about 2,400 years old. Burnt diyas or lamps, along with trees with amulets tied to them. The caves and the platform-like structures around them are believed to have been once used by the Buddhist monks for meditation, and were later used by the Hindu Sadhus. It is a precious site, not only for the historical value, but, also as a mark of heritage near the fast modernizing city of Islamabad. 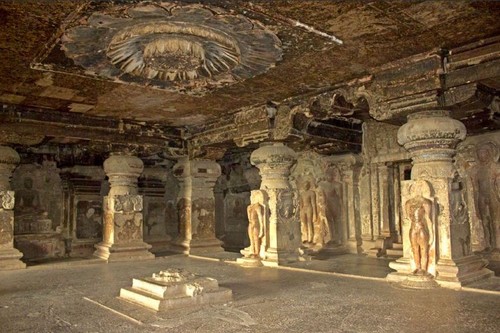 The Ajanta and Ellora caves in Maharashtra are the most famous Asian caves in India. The Ajanta Caves, dating back to 2nd century BCE, and consisting of thirty Buddhist monuments carved in stone, contain the finest surviving examples of traditional Indian painting and sculpture, revolving around religious art. The thirty-four monumental caves of Ellora have rock-cut temples, viharas and mathas of Hindus, Buddhists and Jains, representing religious harmony during 5th – 10th centuries. The paintings, frescoes and sculptures bear great detailing, and show the skills of the early artists.

Chen Ching Chuan, a retired man, residing in Taiwan, took from 1969 to 1979 to cut into the side of Mt. Wandou, and created a complex network of chambers with tiny chambers, shortcuts and dead-end turnings. Now, known as the Xian Feng Ling Sun Moon Cave of China, it stands as a testament of the determination and imagination. The footprints of man with similar ideas have been left behind in an innumerable number of caves around Asia as the people developed from using sign languages to writing religious scriptures. It is our duty to protect the treasures of the continent.