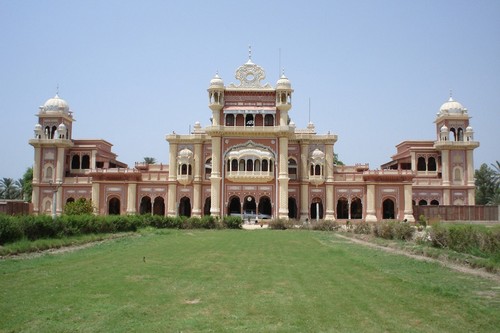 Castle is a large building, typically of the medieval period, fortified against attack with thick walls, battlements, towers, and often a moat. Castles are usually considered to be the private fortified residence of a lord or noble. They are historical hot spots, where we can connect with the real-life people who led nations, produced famous art, fought battles, and inspired legends. There are so many castles in the world, you can see “10 Gorgeous Castles Around The World“, but here, this article features ten most famous castles of Pakistan.

Pakistan is a land of natural beauty. It has a number of natural places to visit and many beautiful historical places built by mankind of different era. Which are famous for their architectural beauty and attraction and catch the visitor’s attention from all over the world. We have try to make a list of top 10 most famous castles of Pakistan. Every famous castle or fort from Pakistan has been included in the list. 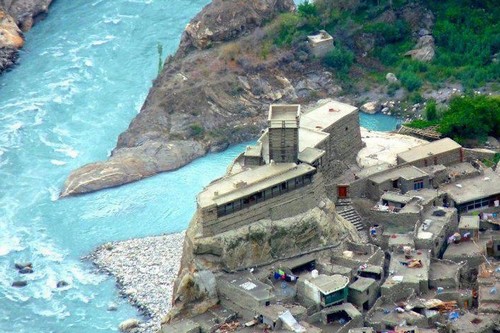 Located in Karimabad in the Hunza valley in Gilgit Baltistan, Altit Fort was originally home to the hereditary rulers of the Hunza state who carried the title Mir. It’s believed that, the fort is around 900 years old, which makes it the oldest monument in the Gilgit–Baltistan. The Altit is a Tibetan word which means this side down. Altit’s first name was Hunukushal, meaning the village of Huns. The Huns came from the Huang-Ho valley in China. The name later changed to Broshal, means a village of Bruchiski speakers. The Altit Fort was in great disrepair, but has been restored by the Aga Khan Trust, with the help of Government of Norway and Japan. It has been open to the public since 2007. 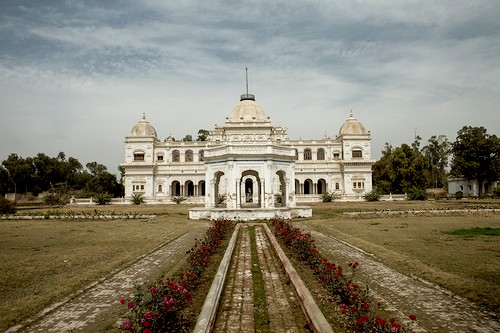 One of the most famous place in Pakistan by its elegance and glory – The Sadiq Garh Palace – situated in Dera Nawab Sahib, Bahawalpur District in Punjab province. The palace was established in 1882 by the King of Bahawalpur, Nawab Sadiq Muhammad Khan (IV). It took ten years to complete with a cost of fifteen lac, under the supervision of expert engineers.The palace is surrounded by a huge wall and having lush green lawns inside it. There are bastion in every corner and a beautiful dome in the center of building. 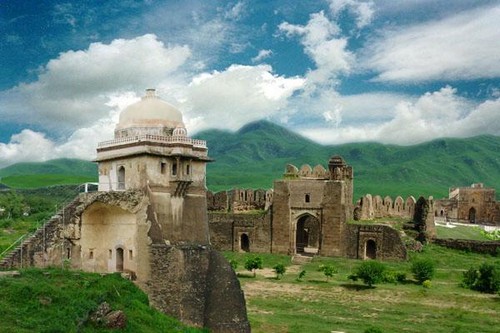 Rohtas Fort, the one of the most impressive historical monuments in Pakistan, built by king Sher Shah Suri, between 1540 and 1547 AD. It is located in Dina town, near the city of Jhelum. The fort was built to crush the local tribes of Potohar called Gakhars. Actually Sher Shah Suri was scared from Gakhars and made the fort to save his throne. Within the huge terraced rampart walls with robust bastions and twelve gates, It took 8 years to complete with a force of up to 30,000 men. The fort is irregular in shape, 5.2 km in circumference, follows the contours of the hill it was constructed on. Most of its parts was built with ashlar stones.It was later used by Mughal emperor Akbar and Sikhs. 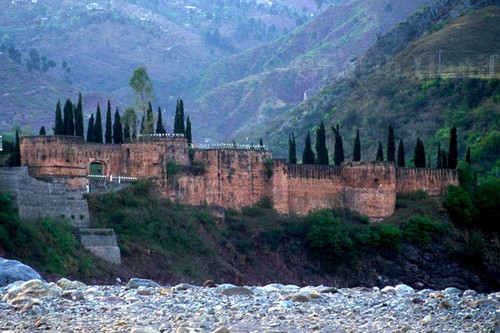 Red fort also known as Muzaffarabad fort is situated alongside Neelum river, in Muzaffarabad district, Kashmir. It is said that construction of the Fort was initially taken up by the Chuk rulers, however it was completed by Sultan Muzaffar Khan the founder of Muzaffarabad city during 1646. The fort lost its importance during the Mughal rule in Kashmir, because they were more interested in Kabul, Bokhara and Badakshan. The fort again came into limelight and recovered its importance during the Durrani’s rule of this area. later, the Dogra rulers, Maharaja Gulab Singh and Rambir Singh reconstructed and extended the fort for their political and military operations. This fort is surrounded on three sides by the Neelum River. Its architecture shows that great experts in design and structure participated in its construction. 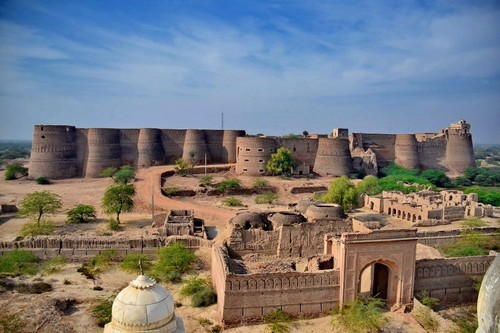 Derawar Fort is located 48 Km from Dera Nawab Sahib, Bahawalpur. It is one of the largest square fortress in Pakistan. It is still in very good condition. The fort has forty bastions, which are visible for many miles in Cholistan Desert. The walls stand up to thirty metres high, have a circumference of 1500 metres. It was built by Hindu Rajput, Rai Jajja Bhati of Jaisalmer. It remained in the residence of the royal family of Jaisalmer until captured by the Nawabs of Bahawalpur in 1733. The tombs of the Nawabs of Bahawalpur and their families are located in this fort.

The Faiz Mahal is one of the glorious architectural assets of Pakistan, situated in Khairpur District in the Sindh province. This beautiful palace has a history of more than two hundred years. It was built by the imperial family of Kahirpur, the Talpur Mirs in 1798. As Khairpur was the city of Mirs (wealthy & rich people), they built number of monumental buildings there. Faiz Mahal is one of those splendid buildings. The palace, also known as “Aram Garr” (place of rest) consists of many beautiful buildings and gardens. It is a classic piece of Mughal construction style, and artwork. 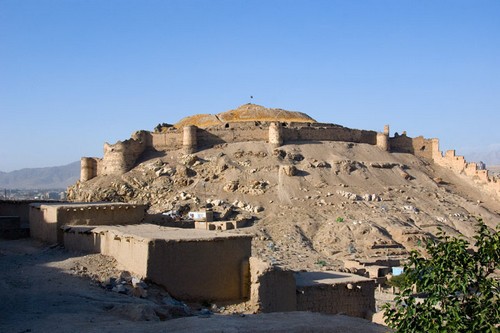 Bala Hissar fort is one of the most historic places of Peshawar, KPK. In the early nineteenth century Bala Hissar was the residence of Afghan kings. The name Bala Hissar (meaning: elevated or high fort) was given by the Pashtun King Timur Shah Durrani, who used the fort as the winter capital of the Afghan Durrani Empire. The Sikh empire who conquered Peshawar in the Battle of Nowshera in early 1823, named it Samir Garh but the name did not become popular. The fort has seen its construction and destruction by conquerors, warriors, invaders and kings on several occasions. The last destruction was mad by Afghan King Sher Shah Suri, and was reconstructed by Mughal King Hamyun. He himself supervised the rebuilding of the fort, because he wanted to use the it for his conquest of India. 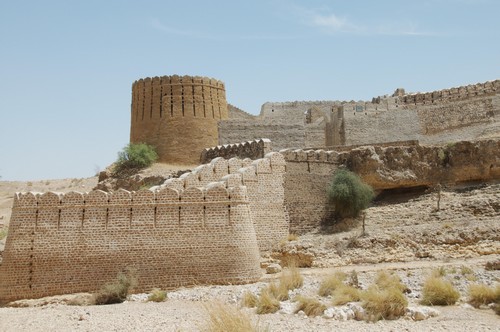 Ranikot Fort, also known as the great wall of Sindh, is situated in Lakki Mountains of the Kirthar Range in Jamshoro District, Sindh. It is the largest fort in the world with a circumference of approximately 26 kilometres. It’s believed the most talismanic wonder of Pakistan. It’s believed that the fort is possibly built by a Persian noble Imran Bin Musa Barmaki who was the Governor of Sindh in 836, under the Abbasids. There is no evidance about the original purpose and architects of the Fort. But the current structure was reconstructed by Mir Karam Ali Khan Talpur and his brother Mir Murad Ali in 1812. 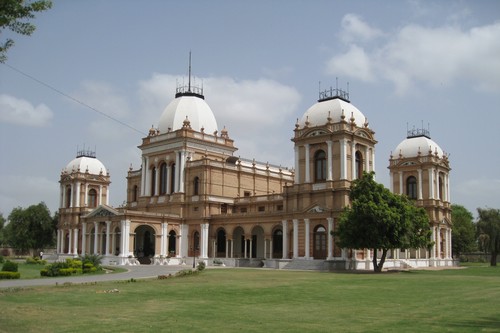 The Noor Mahal in Bahawalpur belonged to the Nawab of Bahawalpur princely state, during British Raj. It was built in 1872 like an Italian chateau on neoclassical lines, at a time when modernism had set in. The construction of Noor Palace was undertaken by Nawab Subah Sadiq IV. He made this palace for his wife. However, she spent only one night there, when she see the adjoining graveyard from her balcony, she refused to spend another night there, and so it remained unused during his reign. Noor Mehal is one of the hidden gems of Bahawalpur. Now it is open to public and currently is the property of the Pakistan Army and is used as a state guest house. 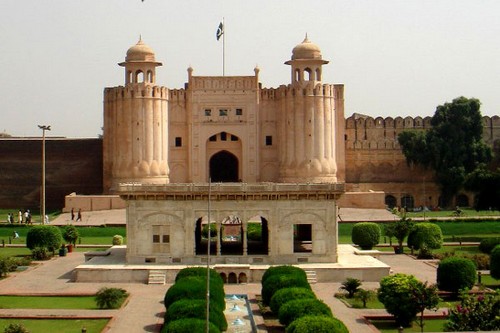 The Lahore Fort, known as Shahi Qila located in the northwestern corner of the Walled City of Lahore or Old Lahore. The origins of the fort are obscure, however the existing structure is said to have been built by the Mughal emperor Akbar. It spreads over 20 hectares and was regularly upgraded by Mughal, Sikh and British rulers. The fort has two gates; Alamgiri Gate build by Emperor Aurangzeb which opens towards Badshahi Mosque, and Maseeti or Masjidi Gate built by Emperor Akbar which opens towards Masti Gate Area of Walled City.