When it comes to survival, you have to grow beyond yourself, to prevent certain death. Mining accidents, falls from heights, shipwrecks and day-long odysseys through the desert – these are all disasters that often involved the lives of those to an end in a most rapid manner.

Some have survived by chance or by a fortunate twist of fate, Others fed on raw human flesh and even drank their own urine. When people fall into an extreme emergency situation, then they suddenly do things that they would have thought are possible never in normal life and so they finally secure their existence. Here are ten incredible stories of survival in extreme situations. Have a look! 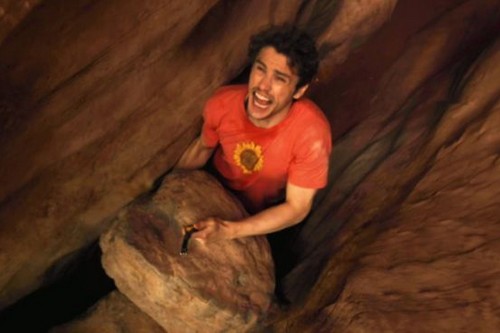 Born in 1975, Aron Ralston Lee is an American mountaineer, who got his arm jammed into a boulder in April 2003 during a hike in the Blue John Canyon in Utah. The next whole day the young man was busy trying to free his hand from the rock.

But ultimately everything remained in vain with a homemade pulley. After five days Ralston was hypothermic, exhausted and almost dried up. In his distress he broke his radius and ulna of the affected arm himself as the body part was turned in a certain direction for a very long time. He then took out his pocket knife and ripped off the blood vessels and soft tissues.

About ten months after his macabre self-liberation Aron Ralston remounted a special prosthetic arm. The jammed arm in the rock hand was later  burnt  to ashes. 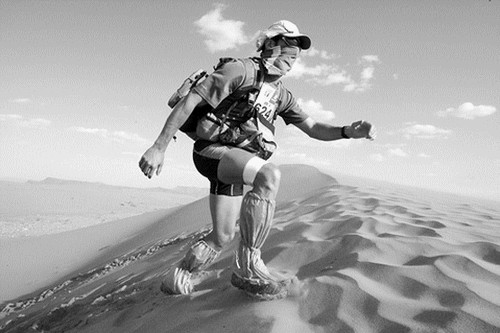 1994, during the legendary Marathon des Sables i.e (The toughest footrace on earth( , the Italian-born athlete Mauro Prosperi got strayed. The course led to a 230 km long route through the Moroccan Sahara . During a prior storm Prosperi was running in the wrong direction.

Prosperi said he had to occasionally drank his own urine, so as to avoid being drying out completely . The sportsman became so desperate that he wanted to kill himself in order to find a less cruel death than dying of thirst. But when he cut his wrists, the cuts were healed up by the thick blood by itself.

Nine days after Prosperi came off the course, he was about 200 kilometers from the marathon route and  was found by Algerian nomads . He lost about 15 kilograms during this time period.

3. The only survivor of a plane crash – Vesna Vulovic

Vesna Vulovic worked as a stewardess in a Yugoslavian aircraft when on January 26, 1972  it crashed over the former Czechoslovakia .According to the Secret Service, the reason for the crash was a bomb explosion. Vulovic survived the disaster as only one of a total of 29 people.

Vulovic was enclosed in a piece of wreckage, as it bounced with her in a wooded area on the ground. She was severely injured after their landing and was four and a half hours clinically dead before she could be revived. Then she went into a coma for four weeks. She had broken her arms, legs, spine and the skull.

It is rumored that the aircraft did not explode, but was accidentally shot down by the Czechoslovak Air Force.

4. The mining accident in San José – Stucked in a mine

The incident occurred in the gold and copper mine in San José,Chile on the fifth August 2010, due to a mountain shock. The mine suffered  a serious collapse. 33 miners were trapped at a depth of about 700 meters.

It took more than two weeks for the rescue team to untap the holes to supply food, The miners in the mountain  were supplied oxygen through cracks and old workings.

Thanks to existing machines, rescuers were able to drill for water. In a period of 48 hours each miner received half a biscuit, half a cup of milk and a spoon fish. With a rescue capsule finally all the miners were transported back to the surface after spending 69 days underground . 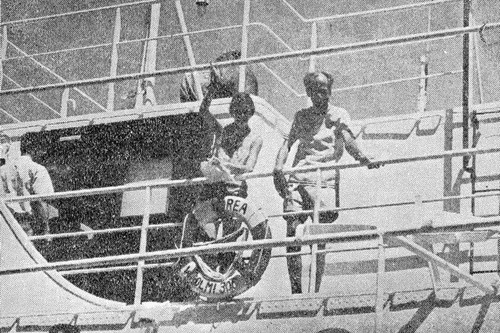 On the fourth in March 1973, a British couple had to face this incident. The couple was heading to New zealand.Located in the Pacific, their yacht (31ft long) was rammed by a whale, which tore a 30 x 45 centimeter hole in the ship. It took less than an hour and the sailing ship went down.

The two sailors escaped on a life raft. But after a few days they  were exhausted. They began eating raw fish . In addition, they also slaughtered a turtle .During their odyssey at sea, they were repeatedly attacked by sharks. After about three months the raft got cracks, so they had to constantly built new a one. It was not until 118 days after the sinking of the yacht, the couple was discovered by the crew of a fishing boat coming from Korea who brought them on board. 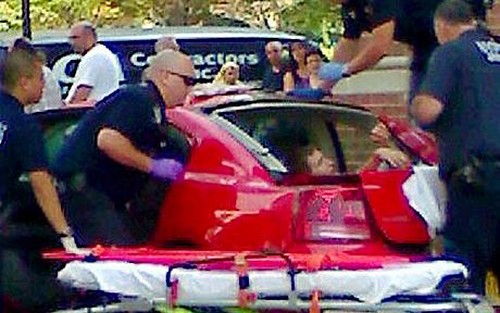 Thomas Magill, a window cleaner who had incredible luck in case of a fall from the 39th floor of a New York skyscraper. The then 22-year-old man fell while working about 120 meters in depth.

Thomas Magill owes his life to a parked car, as he bounced against its back window. The young man flew with his feet directly to the vehicle first. Magill only suffered  multiple bone fractures and was hospitalized. Other than that, the young man remained unscathed.

A few years earlier were also two men who worked as window cleaners in New York fell from a high-rise building. In the fall from the 47th floor of one of the men died instantly, while the other had survived with serious injuries. 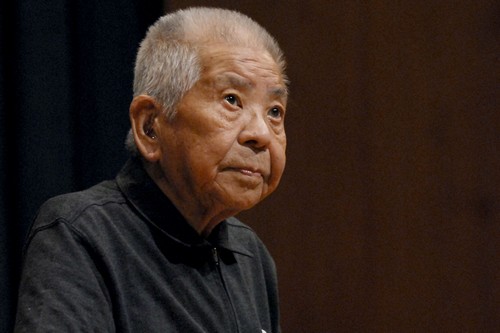 Born in Japan Tsutomu Yamaguchi survived in 1916 as one of 165 people from the two atomic bombings of Americans during the Second World War. He was officially recognized as one of the nine known survivors.

He was near the ground zero point. Yamaguchi was just getting off the tram when the bomb ignited in 580 meters at the sixth August 1945 on Hiroshima. He was approximately about three kilometers from the hypocenter at that time and suffered severe burns to the upper body.

As luck would have it, Yamaguchi was about three kilometers away from the hypocenter at the time of explosion of the atomic bomb on Nagasaki. This time he was sitting in the office when he was again injured. Tsutomu Yamaguchi died on the fourth of January 2010 , at the age of almost 94 years, from stomach cancer. 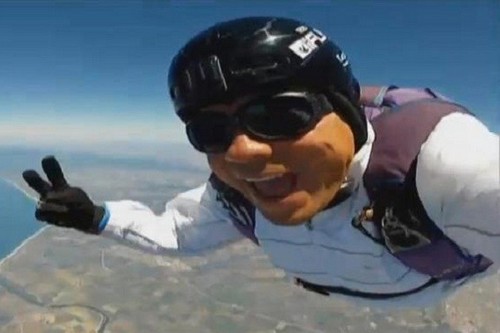 When the American parachutist Joan Murray jumped off the plane with an altitude of 4,350 meters, she had no idea that this adventure would end in the airy realms of North Carolina with a disaster. The parachute did not open and the reserve parachute got tangled up as well.

With a speed of about 130 kilometers per hour, Joan Murray hit the ground, so that the right leg shattered and pelvis was broken. The 47-year-old woman was seriously injured and doomed to death . As luck would have it, Murray had landed just in an ant’s nest.

Ants are known and feared for their venomous bites, but in fact they ultimately saved her life. Presumably, her heart was animated again and again by lethal injections by ant bites and enabled the heart to continue beating.

Murray was ” in a coma for two weeks  after her “adventure and was treated medically thereafter several weeks before she could leave the hospital as a healthy woman. 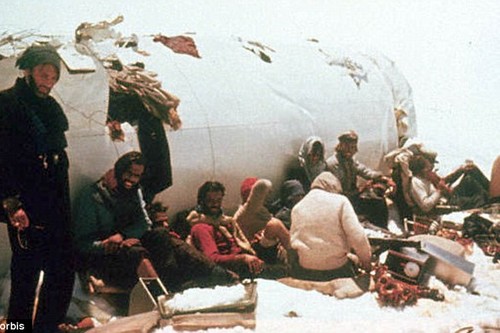 On October 13, 1972, a plane of the Uruguayan Air Force crashed during a flight from Mendoza, Argentina to Santiago, Chile at an altitude of about 4,000 meters on a mountain slope. The passengers were the members of a rugby team who were flying for a game to Chile.

During the flight there was heavy snowfall and gale-force winds. Due to a navigational error, the pilot steered in the descent. The aircraft touched a mountain peak and crashed . Twelve people died instantly and five in the following night.

The temperatures were -30 to -40 degrees Celsius. The few supplies were depleted very quickly. Far and wide there was neither huntable animals, nor any significant vegetation . Over the next few days more people died. Those who remained had held steady by eating their dead comrades alive.

Two of the survivors eventually went on a march across the Andes to seek help. After ten days, the two men were found by a Chilean shepherd. On 22 and December 23 finally 14 more survivors were rescued.

10. A horse is the only survivor – Comanche 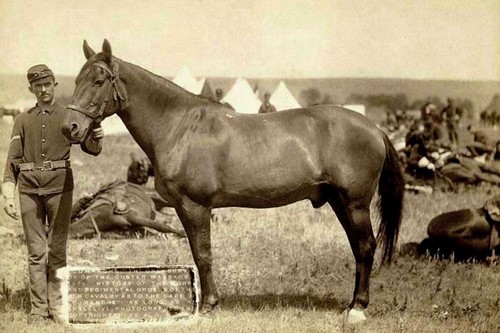 Comanche was believed to have been captured as a wild horse and was trained in St. Louis. Comanche was a mixed breed horse who survived General George Armstrong Custer’s detachment of the United States 7th Cavalry. The incident took place at the Battle of the Little Bighorn.

Captain Myles Keogh of the 7th Cavalry bought him for his personal mount, to be ridden only in battle In 1868, while the army was fighting the Comanche in Kansas, the horse was wounded by an arrow, but continued to carry the Captain in the fight.

He named the horse “Comanche” to honor his bravery. Comanche was wounded many more times, but always exhibited the same toughness. Comanche was found again after the Battle and was the only survivor, and was not captured by the Indians.

Hope you liked the above list of 10 Incredible Stories of Survival. Here is another list ‘10 people who amazingly survived their execution‘ you may also like this.