The Time Keeper has had its own impact throughout the history. Starting from Stonehenge, the famous pre-historic solar calendar, till the Strela, branded as Poljot, Sekonda, first took a spacewalk when an astronaut wore it to space in 1965. The history applauded when Elizabeth I of England received a wristwatch from Robert Dudley in 1571. Now technology dominates everything.

We are living in a world where pager is transferred into the phablet within a very short time, and walking a mile is historical due to modern day transports. Watches are no exception. They started their journey from a beautiful pocket piece, and nowadays, technologically superior watches are within our budget. So without creating any more curiosity, here is the list of top 10 Technologically Advanced Wrist Watches. This is the followup list to the 10 most expensive watches. 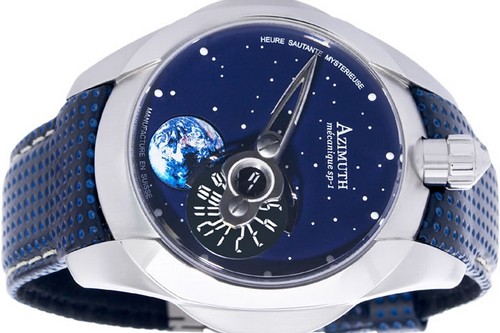 SP-1 Mechanique nicknamed the Spaceship Watch. One of the most advanced watch by Azimuth. This masterpiece is the blend of futuristic styling and progressive technical flaunts. It has a rendition of Earth as seen from space which rotates every sixty seconds. It has a jumping hour display and also a rotating disc which is at the base of a minute hand powered by a Unitas 6497 movement in Cotes de Geneve finishing. This wristwatch is made of 316L stainless steel with domed sapphire crystal screen. It incorporates 3-dimensional minute hand and perforated leather strap with blue stitching. It is also 3 Bars water resistant. Outer space blue tone dial with Super-Luminova markers and stardust give this watch its superior look. 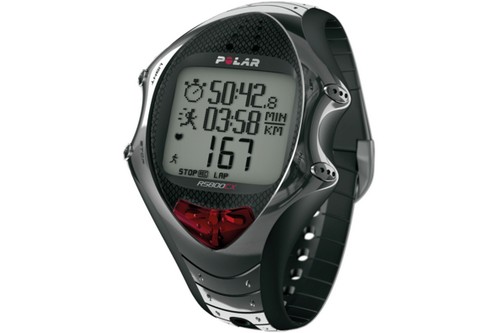 The RS600CX, designed by Polar, is a smart-watch specifically geared towards multi-sport. It has 80 features in it. Which include; The measuring of ambient temperature, GPS, heart rate monitor, cadence, incline, speed, even average running stride length monitor. Settings can be applied across three different shoe specifications. It can also act as bicycle-mounted cyclometer that. In addition to the above features, measure efficiency, left/right balance and power output. All of the recorded data on the device can be easily transferred to PC via infrared transmitter. This smart-watch also has a full array of speed and distance functions along with a barometric altimeter, which display altitude and gradient. 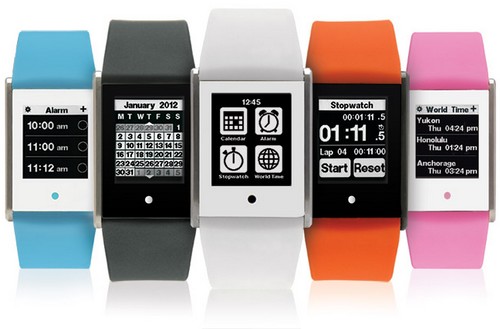 E-INK Curved Leather Band Watch is a technological wonder created by Phosphor. The digital display of this watch utilizes the revolutionary E Ink electronic paper display featuring its paper-like, high contrast screen. The display comes in two modes, a standard numeric digital display and a graphic hour clock display. The ability to switch between white-on-black and black-on-white time display gives this digital watch its unique styling. The width of the case is 38mm while the edge thickness is just 8mm. This timepiece is based upon Micro-Magnetic Mechanical Digital Technology and comes with a screen having wide viewing angle with 180° viewing cone. This wristwatch is also 5 ATM – 50m Water resistant. 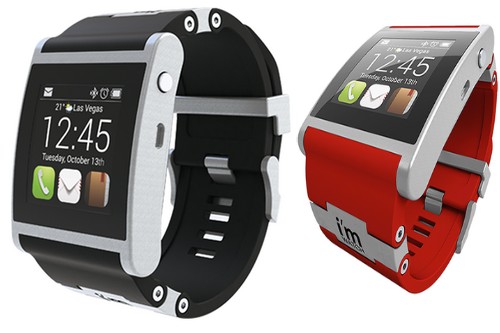 I’m Watch is a high-tech smartwatch created by I’m SpA. It comes with 1.54-inch 220 pixels per inch touchscreen display with a resolution of 240×240. This device runs on cross-platform Android and can connect with its Bluetooth with Blackberry 10+ iOS 4+, as well. As far as the specification of this smart-watch is concerned, it is loaded with 64 MB RAM and 4 GB ROM to store data within it. It is powered by a non-removable 600mAh battery which can provide 2 hours back-up and 48 hours back-up in stand-by mode, respectively. It can display information about missed calls, messages and social updates of the connected smartphone. This smart-watch is very user-friendly, with preloaded apps for social networking and playing music. 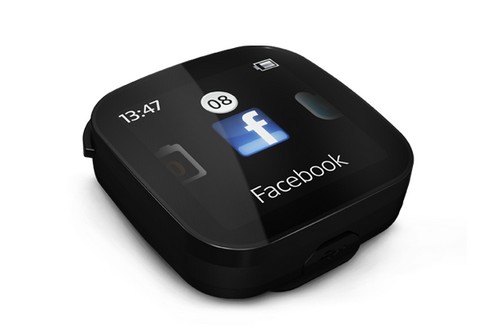 LiveView, The flagship smart-watch from Sony Ericsson, can connect with phones via Bluetooth and is able to display information like missed calls, texts and Facebook or Twitter updates. It comes with a 128×128 pixels, 1.3-inch OLED touchscreen display and easily connects only with Android 2.0+ smartphones which is a little disappointing for iOS users. It even includes a music player and Android app support. Also, It is splash proof as it supported by IP54. This smart-watch can be used as a viewfinder to take photos via the connected smartphone. Company’s software developers have been working to create around 400 SmartWatch-compatible apps for this masterpiece. The interchangeable wristband gives this watch a versatile styling. The quick-touch screen and responsive controls have also been improved from previous concept designs. 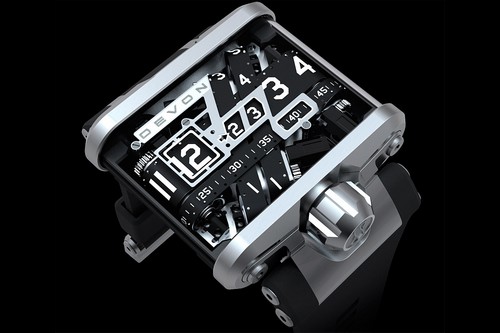 Tread 1, created by Devon, is a reinvention of the humble watch with a patented system called Interwoven Time Belts. Operating out of California, DEVON is the only American watch company using its own proprietary movement. The Interwoven Time belts are based upon compact microstep motors which also provide the accuracy. The watch is powered by a lithium polymer battery, and as it claimed by the creator, one charge will last couple of weeks. The five-piece case design is made from 316L, surgical-grade stainless steel, the hardest and most durable steel available in the world through advanced computer numerical control machining. The Tread 1 was nominated for the Gran Prix d’Horlogerie de Genéve in the category of Design and Concept Watch in 2010. 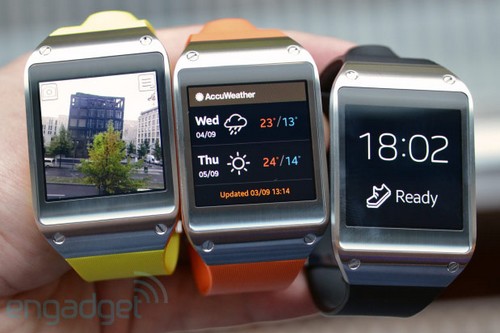 It is the flagship attempt at a smart-watch from a big brand. It comes with 1.6-inch Super AMOLED 320 x 320 pixel touchscreen and 1.9MP primary camera on the wrist-strap. The Galaxy Gear pairs with other Samsung devices via NFC and Bluetooth, and automatically switches on when the arm is raised while wearing it. The integration of third-party apps comes very handy with this masterpiece. It also consists of voice memos and the ability to recognize voice commands for adding meeting schedules in calendar. With a state-of-the-art firmware, the gear can send email notifications, display Facebook and Twitter updates, Google Hangout messages and Messenger pings. There’s no Wi-Fi or GPS on the wristwatch, but it requires charging through USB connector. 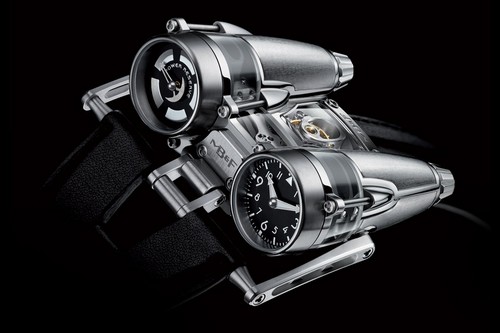 This piece of technology is made by MB&F, watchmakers reputed for their unique design. The 311 component aviation-inspired watch is based around the complex HM4 engine and has dual dials. One displays time and the other one shows how much power is left in the timepiece. While it is made out of Grade 5 Titanium and sapphire body, every line and curve is a poetic harmony. The three-dimensional Horological Engine used in this piece art is a marvelous creation by MB&F. It comes with a manual winding, with two mainspring barrels in parallel which reserves the power for 72 hours. The balance frequency of this watch is 21,600bph/3Hz. Not only that, this high-tech watch also consists of 50 jewels inside. 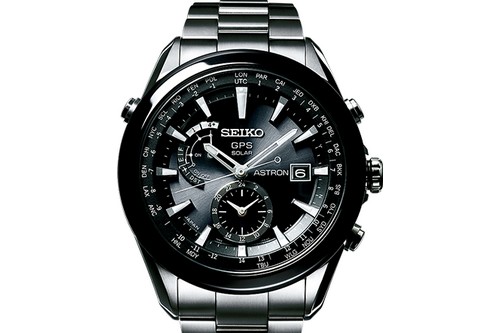 This timepiece comes from one of the world’s most reputable brands, Seiko. This solar-powered watch is made of stainless steel. It has some cool technology under its classy styling. This 7X52 Caliber watch is World’s first GPS Solar Watch. The Astron features GPS controlled time zone adjustment, world time functions that recognize 39 time zones via satellite, and a perpetual calendar. Automatic Atomic Time Synchronization from GPS Satellites is one of the best features of this device which have an ultra-Low Power GPS Receiver. This watch is accurate to ±15 Seconds / Month when not automatically synchronizing with the satellites. The Airplane mode is also present to disable automatic synchronization while flying, for frequent flyers. 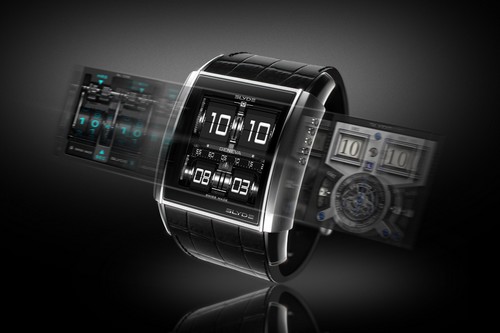 This technology-wonder is designed by Jorg Hysek Jr, son of famed French watchmaker, Jorg Hysek Sr. It has a 232×240 pixel, 28 x 29mm active zone LED screen with a sapphire crystal to cover the curves of the wrist. Without having any physical buttons, the watch has three battery indicator lights on the side and a light sensor to automatically adapt the brightness of the touchscreen dial. It is made of black PVD steel and rose gold while the mechanism entirely depends upon CLT electronic movement. This wrist gadget is powered by 3.8V lithium polymer with a capacity of 250 mAh. The dial is a domed sapphire touchscreen, and the watch also has a USB socket connector for charging the battery or communicating with PCs.

Many researches are conducting these days as Google, Apple, Sony, and Samsung are trying their best to develop wearable technology that could be used to monitor and even track personal health and diagnose disease. Starting from renowned Swiss watchmakers to big brands like Apple, all are participating in the race to build the world’s smartest and technologically advanced wrist watches.