Everyone’s favourite yellow family, The Simpsons, have been cracking us up for decades. But sometimes fact can be funnier than fiction. Here are top 10 things that The Simpsons predicted strangely. Have a look! 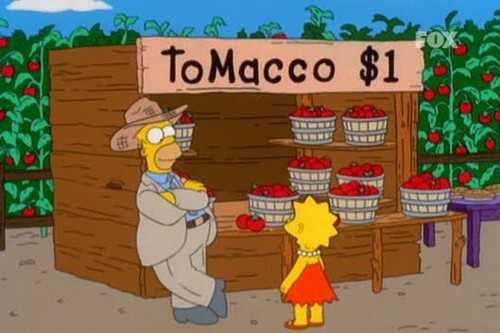 In this classic episode, Homer decides to turn his yellow fingers green and plant a mix of crops on the land while hiding out in Grampa’s old farmhouse.

But, deciding that fertilizer is for amateurs, Homer uses plutonium instead and ends up with a hybrid crop that he names tomacco, a mix of tomato and tobacco. Despite tasting disgusting, the juicy fruits are highly addictive, making the produce extremely popular.

In 2003 operations analyst Rob Baur became inspired by the episode and decided to grow his own tomacco plant by grafting together a tobacco root and a tomato stem. Forensic scientists even confirmed that the plant’s leaves contained nicotine. Bauer’s ingenuity gained him some attention and he was invited to meet the writer of the Simpsons episode, Ian Maxtone-Graham. He even fed him a real life tomacco. 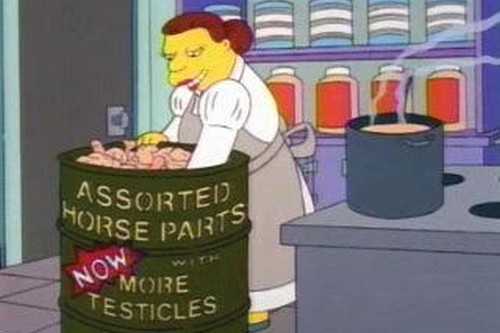 Yum. Lunch Lady Doris is frequently seen putting questionable ingredients into the school children’s lunch meals, including horse testicles and even a gym mat. And unfortunately it’s not just the poor kids at Springfield Elementary who are forced to eat that crap. In 2013 European countries were rocked with the news that supermarket food labeled as containing beef secretly contained horse meat – in some cases as much as 100%. Meanwhile, on the other side of the pond in 2011 food bloggers reported that a Simpsons joke had come true when it was discovered that the McRib burger shared an ingredient otherwise found in yoga mats. The ingredient in question was Azodicarbonamide, which is found in foam products and also acts as a flour-bleaching agent. This means that the yoga mat ingredient is in every single bun in McDonald’s and most fast food joints. However, it has been banned in Europe for potentially contributing to asthma. 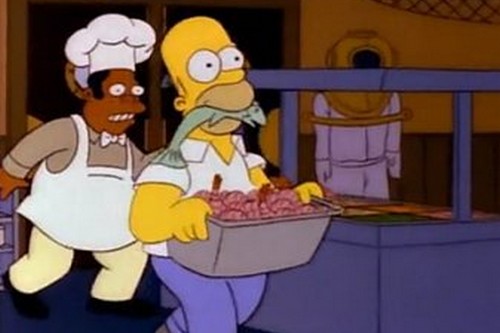 We all know Homer loves his food, and this is no more evident than in the episode New Kid on the Block, when he takes ‘all you can eat’ a bit too literally. After hours of gorging food at the seafood buffet in The Frying Dutchman, Homer is eventually thrown out. But, feeling like he’s suffered a huge injustice by not eating the Sea Captain out of business, Homer takes the restaurant to court, suing them for failing to live up to the promise of ‘all you can eat’.

Now from Springfield to Wisconsin, where Homer’s predicament became a real-life problem for Bill Wisth, who visited Chuck’s Place in the hope of taking advantage of their all you can eat promotion. After he’d eaten 12 whole fish, the restaurant complained that they were running out of food. They gave Wisth another 8 fish and agreed that the meal was on the house if he promised to leave the site. Not satisfied with their offer, Wisth called the police and picketed outside the restaurant, accusing them of false advertising. Ironically Wisth himself ended up getting arrested, as his outraged picketing fell under the category of disorderly conduct. 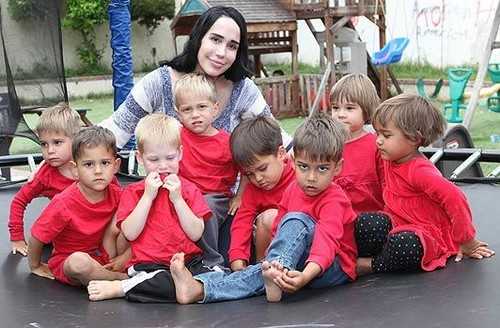 When the Simpsons family decide to meddle in Apu and Manjula’s life by spiking them with fertility drugs, Manjula ends up giving birth to octuplets. However, as he doesn’t have enough funds to raise a family of 10, Apu agrees to let his kids be raised by the sleazy owner of the Springfield Zoo, Larry Kidkill. And soon he becomes horrified to learn that the deal includes his babies being exploited as a star attraction at the zoo. When the episode was released it received mixed reviews from critics, including journalist Nancy Basile from about.com who claimed that the plot was ‘outlandish’. Little could Basile have imagined that in 2009, America would have its very own octomom. 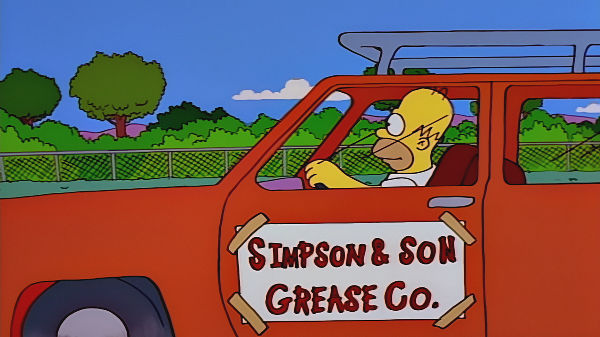 Homer’s never-ending money making schemes take a hilarious turn in the 1998 episode Lard of the Dance, when he realizes he can make money by stealing and reselling grease. He even pulls Bart out of school to help with his new business venture. This episode is one of the best, not just because we get to see Willy’s buff body, but also because the idea of stealing grease just sounds so ridiculous.

That was until 2011, when the St. Louis Post-Dispatch reported that gangs of thieves were greasing their pockets – pun intended – by stealing and re-selling used oil from restaurants. Although it is unknown exactly how much the stolen grease is sold for, it is thought to be a multi-million dollar business. 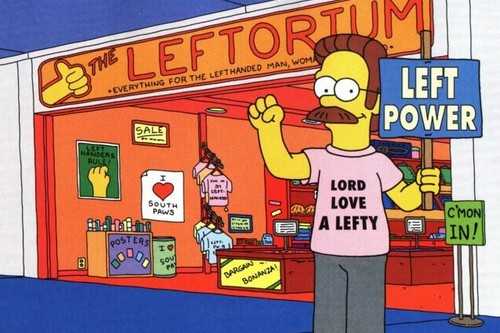 An episode focusing on left-handedness shouldn’t be this funny. But in the episode ‘When Flanders Failed’, viewers have no option but to laugh at Homer’s eagerness to see his neighbor Ned fail in his left handed shop venture. During the episode, Homer witnesses various characters bemoaning the lack of products made for their left-handed predicament. But, rather than directing them toward Flanders’ shop, he chooses instead to stand gleefully in the wings until his neighbor falls into financial ruin.

Cut to real life San Francisco in 2008, when the city became a bit more inclusive and the Lefty’s store opened, selling customized left handed products to the public. But with only 1 in 9 people being left-handed in the real world – compared to 1 in 3 Springfieldians- only time will tell whether the franchise will become as popular as Flanders’ Leftorium ends up being. 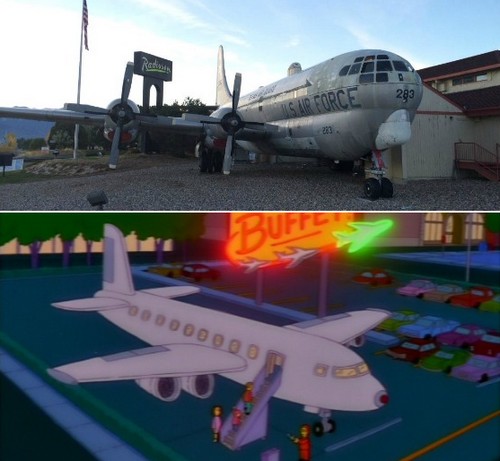 In what is probably one of the steamiest episodes of The Simpsons, ‘Natural Born Kissers’ sees Homer and Marge re-discover their sexual mojo by getting it on in public. Before the sparks start flying, though, Springfield’s favorite couple are forced to endure a not-so romantic date with their kids at Up, Up and Buffet! A restaurant built inside an airplane, which even has the added bonus of simulated turbulence.

If you are a high flyer and that actually sounds like your idea of fun, then you’ll love The Airplane Restaurant, the self-proclaimed best aviation restaurant in the United States. Located in Colorado, the home of the US Air Force Academy, the restaurant was repurposed from a Boeing KC- in 2002. Fit to serve 42 passengers – I mean diners – at a time, let’s hope anyone eating here has a better time than Marge and Homer. 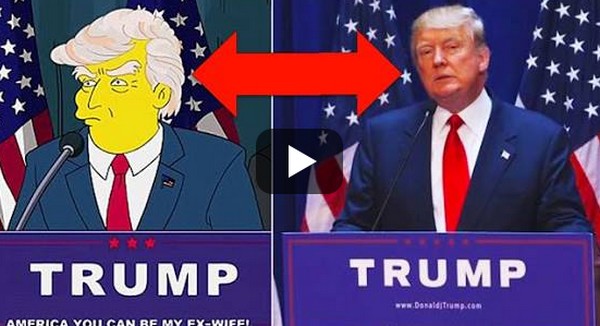 In what was meant to be the most absurd joke that Simpsons creator Matt Groening could think of, the episode Bart to the Future sees Donald Trump as president of the United States. In this episode, Bart is shown a vision set years in the future. Looking at this dystopia, America has hit rock bottom at the hands of Trump, who has left the country categorically broke. According to scriptwriter Dan Greaney, the episode was intended to be a ‘warning to America’ of what could happen should the US go ‘insane’.

But clearly no one took notice, and in 2016 Donald Trump secured the position of presidential candidate for the Republican Party, remaining almost head to head with opponent Hillary Clinton throughout the campaign. While Matt Groening has admitted that he still believes it’s unlikely that Trump will become president, it wouldn’t be the first time a Simpsons joke came true. 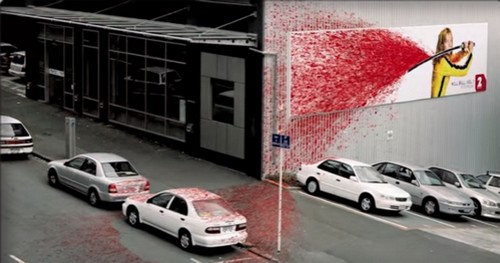 In a New Zealand billboard advertising campaign for his action movie Kill Bill, lead actress Uma Thurman was depicted wielding a samurai sword while blood-like paint dripped off her weapon onto the white cars below. The billboard, which was devised by advertising agency Saatchi & Saatchi, received criticism for being too gory. But anything inspired by Itchy and Scratchy gets my backing.

It’s Whacking Day! Springfield’s favourite annual holiday, second only to Christmas. During the brutal holiday, the town of Springfield races to the square, wielding bats, ready to beat Springfield’s snakes to death. And it’s a tradition that Reverend Lovejoy even claims is supported by the Bible. With Homer already polishing his pole, it’s down to Bart and Lisa to fight for snake rights. At the climax of the episode, the witty Simpson kids enlist the help of soul singer Barry White to save the snakes, by luring them into the safety of their house.

In 2013 nearly 1600, people were drawn to Florida by the invitation to take part in a real life snake cull, named Python Challenge. Due to their camouflage and habit for lying still, the pythons are infamously hard to catch, but nevertheless hunters were advised to kill the snakes via a bullet to the brain or straight decapitation. Really humane, then. Sadly, with no soul singers to be found supporting snakes in real life, 68 invasive Burmese pythons were killed by the hunters.