More than 5,500 female guards had reportedly served the German concentration camps. These women were at par with their male counterparts and were characterised with ferocious sternness, steeled heart and capable of sheer brutality. Here is a list of such 10 wicked women:- 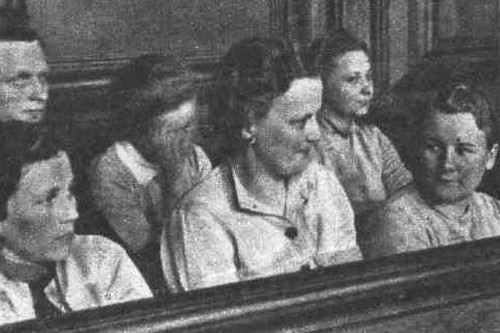 Before marriage Klaff worked in a jam factory. When the war broke out she got herself assigned to Stutthoff and served there for a year committing sadistic abuse on the prisoners. When the war ended in 1945 she was arrested by Polish police and sent to prison where she suffered from typhoid fever. Later she was tried and sentenced to death for her inhumane crimes. During her trial she is known to have stated that “I am very intelligent and very devoted to my work in the camps. I struck at least two prisoners every day.” Having made this statement, we can safely conclude that she was not as intelligent as she liked to believe. She was publicly hanged on 4th July 1946. 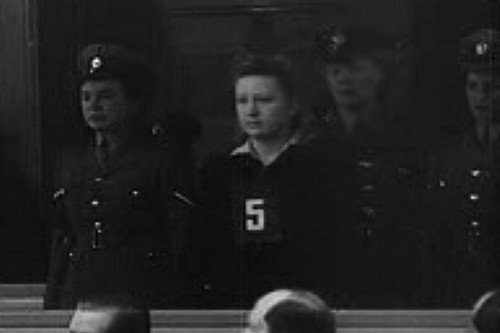 Though beginning her career at the age of 15 as a maid Binz was unwilling to die like every other old maid. She applied and was chosen as a trainee guard in 1939. Since then she had been steadily rising in her rank from supervising camp laundry & kitchen to the bunkers where women were tortured and killed. One cannot imagine or one does not want to imagine the horrors committed under her command during her deputy chief wardress-ship at Ravensbruck and later at Buchenwald. Witnesses have testified how this “unyielding” woman beat, stomped, shoot, whiped and slapped the female prisoners under her charge continuously.

She reportedly had a lover, an SS Officer and together they often strolled around the camp grounds laughing and amusing themselves with the sight of women being flogged. In another reported instance of her brutality she chopped a prisoner to a bloody lump with an axe because she wasn’t working hard enough. After the wars Binz was tried and executed for her crimes on May 2, 1947.

It’s both ironical and sad that a nurse would turn to killing. In 1939 Bosel was sent to work at the Ravenbruck concentration camp. There she held the post of “work imput overseer” which meant that she was among those who were to decide which prisoners should be immediately killed by gassing and which one’s could be sent to a small concentration camp named Uckermark when young girl between 16 to 21 years of age were kept. Bosel was a true Nazi at heart and echoed the Nazi philosophy “If they cannot work let them rot.” When the Soviet Red Army was approaching the SS of Ravenbruck decided to annihilate all the prisoners but they could not do away with all the prisoners so they fled. Greta Bosel and other camp guards (including Dorothea Binz) were captured. Following the Hamburg Ravensbruck War Crimes Trial, Bosel was executed on 3 May 1945.

In the above video Bosel and Binz among other SS guards are being sentenced for their crimes. Interesting fact: Bosel was hanged using the same noose as Binz. 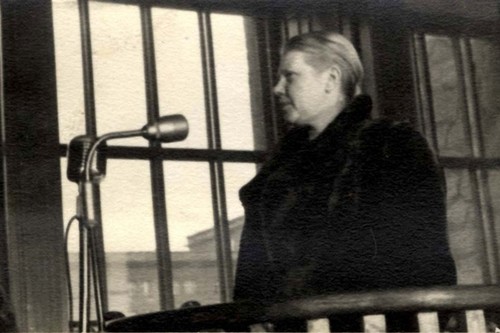 Orlowski worked as an overseer at the Nazi concentration camps. At Majdanek camp she was regarded as one of the most brutal overseer; and no wonder, for she came out with unique torture practises like whipping prisoners across the eyes thereby making them unfit for work, which caused them being sent to execution. To finish off with as many people as possible she would throw little children on top of the people loaded in the trucks destined to gas chambers.

But near the end of the war, her behaviours surprisingly or rather shockingly changed. The death march from Auschwitz-Berkenau to Lolau witnessed the changes in her where she would often comfort the prisoners, provided water to the thirsty prisoners and even slept alongside them on the ground. Her behaviour is still open to debate. Following the end of the war she was tried, found guilty and sentenced to life imprisonment but was released in 1957 having served only 10 years. However in 1976 Orlowski was called in for a second trial during which she died. 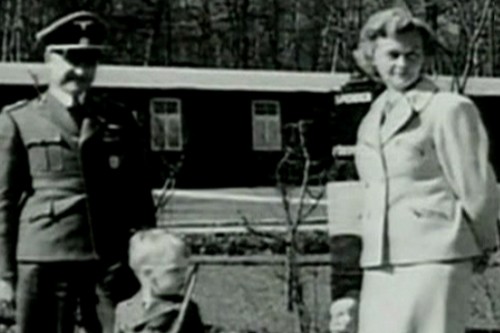 Any discussion regarding wicked women in Nazi camps would be incomplete without her. She was the wife of Karl Koch, commander of Buchenwald and later Majdanek. ‘The concentration camp murderess’ was known to have skinned the tattooed parts of the prisoners’ bodies after getting them murdered. She kept them as souvenir and reportedly turned them to lampshades or book covers. She reportedly liked watching others getting tortured and raped and often encouraged guards to commit such acts in front of her.

In 1943 the Koch’s were arrested. While her husband was found guilty and was executed, Ilse was freed but was arrested by the US authorities later. Following this she served four years in prison and was again freed only to be tried for the second time. In 1951 Koch was convicted of incitement to murder and committing grievous bodily harm therefore was sentenced to life imprisonment. At the age of 60 she committed suicide in prison.

‘Wiesel’ Or ‘The Woman With The Dogs’

She had joined the SS in 1939 to “earn more money.” Juana was abusive and sadistic in nature. Her saga of cruelty can be heard from as many as three concentration camps – Ravensbruck, Auschwitz and Bergan-Belsen. She was known to have a German shepherd towing by her side who was ready to tear the prisoners apart had she give it a chance to. At any rate she often used the dog to torture prisoners. She was last posted in Bergan-Belsen in March 1945 and in the following month of April, when the British Army invaded Bergan-Belsen they found over 10,000 corpse and 60,000 prisoners at the camp. Juana Bormann along with her comrades were prosecuted and convicted of murder. She was executed on 13th December 1945.

She is famous for her defiant attitude when in an interview- taken sixty years after the war- she had said – “Did I make a mistake? No. The mistake was that it was a concentration camp, but I had to go to it, otherwise I would have been put into it myself. That was my mistake.” You can see the video above.

A tall athletic built woman, Bothe served at the Stutthoff camp near Danzig. Comparatively her crime was not considered as brutal as those of her counterpart so her life was spared and she was sentenced to 10 years of imprisonment. In that same interview she had recalled with anger how the British troops had ordered the guard to bury the death bodies of the prisoners they had killed and that she was ‘terrified of contracting typhus because the guards were not allowed to wear gloves or masks.’ She described how the arms and legs of the decomposed bodies came off in her hands when she tried to pick them up, and how lifting the emaciated bodies caused her back pain.’ 90 years old Herta Bothe still lives.

Beginning in 1942, at the age of 22 Lächert had served at Ravensbruck, Majdanek and Auschwitz. She was a former nurse and in the course of her brutal career she mothered three children. Following the Auschmitz Trial in 1947, she was sentenced to fifteen years in prison. Although she got released only nine later in 1956 her freedom did not last long. In 1975 she was convicted of participating in the selection process at the camps. One of the survivors testified that she was such a savage that “she struck until blood showed” which gave her the nickname “Bloody Brigitte”. She was also accused of releasing her dog onto inmates and therefore was sentenced to an additional twelve years. 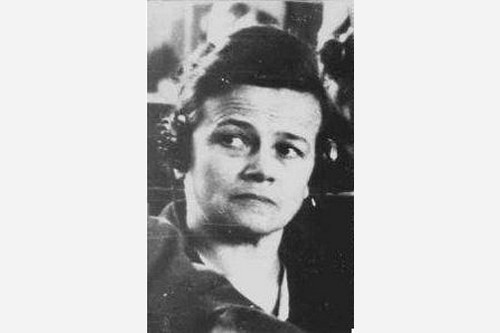 She was a woman with a mission; when in 1944 Neudeck came to the Ravensbruck camp as a trainee she very quickly managed to impress her superiors by her cold-blooded brutality. A French prisoner testified having witnessed Neudeck “cut the throat of an inmate with the sharp edge of her shovel”. Since then she has been notoriously famed as one of the worst female guards. Neudeck was found guilty of selecting and executing 5000 women and children for which she was later sentenced to death by hanging. 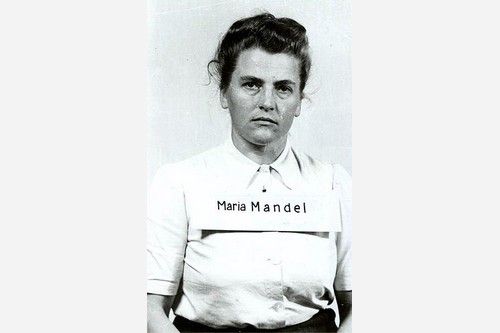 Mandel was held directly responsible for the deaths of 500,000 prisoners at the notorious Auschwitz-Birkenau concentration camp. Having worked in various other camps she had managed to impress her superiors quickly and before long she became the highest commandant at the Auschwitz-Birkenau (she had to only report to a male commandant because according to the Nazi’s a man can never be subordinate to a woman).

An intelligent woman but a vicious sadist at heart, there are reasons for her being nicknamed ‘the beast’ – she would stand at the gate waiting for someone to look around at her then she would drag her/him out of the line and murder him/her. She often selected Jews to serve as her “pet” until she got tired of them and sent them to be executed. Mandel is reported to have enjoyed making selection of children to be killed. At the Auschwitz she had created the Women’s Orchestra of Auschwitz which performed during exit and entrance of working prisoners and also when they were sent to be executed. Mandel believed, it soothed the minds of the would-be dead and make her work more efficient. Estimated to have sent half a million women and children to death, Mandel paid for her inhumanity on January 24, 1948.

Sufia would like to recommend ‘The Reader’ – both the book and the movie. The book was first published in 1995 & has become a part of holocaust literature and German literature. In the film adaptation, Kate Winslet has done one of her finest work (which bagged her Oscar) in portraying Hana Schmitz, a female guard at a Nazi Concentration Camp.