Top 10 Wonders of the Ancient World 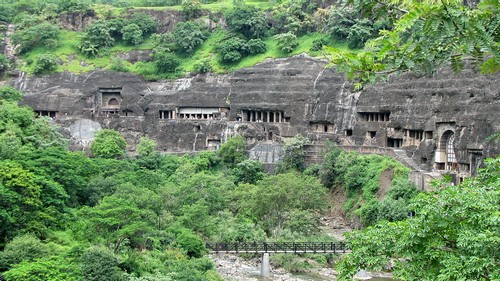 About 100km northeast from the city of Aurangabad, India’s Ajanta Caves are considered the pinnacle of Indian rock-cut architecture. The first Buddhist cave monuments at Ajanta date from the 2nd and 1st centuries BCE. During the 5th and 6th centuries A.D., many more richly decorated caves were added to the original group. British historian William Dalrymple named the Ajanta Caves “one of the great wonders of the ancient world”. See also; 10 Asian Caves Defining Human History and Development. 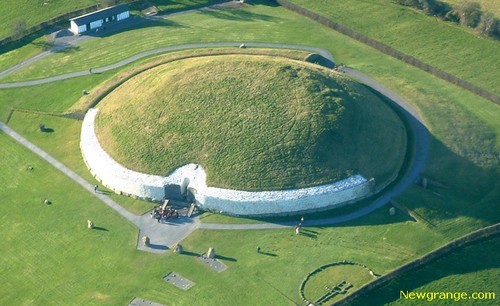 Newgrange’s massive, rounded dome rises from the emerald plains of Ireland’s County Meath like a grass-topped UFO. Constructed during the Neolithic period around 3,200BCE, making it older than the Egyptian pyramids.

This ancient site consists of a large circular mound with a stone passageway and interior chambers. The mound has a retaining wall at the front and is ringed by engraved kerbstones. The site is storied in Irish folklore, there is no agreement about what the site was used for. It has been speculated that it had religious significance – it is aligned with the rising sun and its light floods the chamber on the winter solstice. It is considered one of the most important megalithic structures in Europe.

Built between the 7th and 8th Century BCE, the underground complex was built to defend against attacks from marauding armies. Though it was intended as a temporary shelter, its amenities were impressive: some 600 above-ground doors from which someone can enter the underground city from, 15,000 ventilation ducts to provide fresh air, as well as multiple wineries, cellars and a complex network of passages, tunnels, and corridors. (Source; BBC) 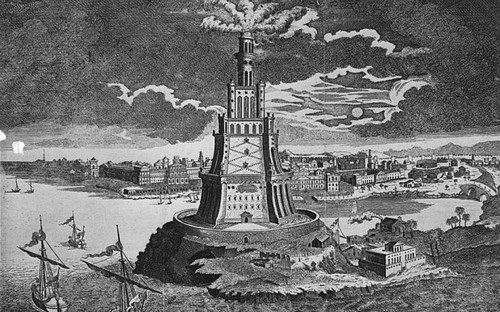 The world’s first lighthouse used mirrors to reflect sunlight for miles out to sea. It was built in third century BCE and stood 440 feet (134 metres) high. One of the Seven Wonders of the Ancient World, it was the tallest man-made structure after the pyramids of Giza and its light could be seen 35 miles out to sea. It was badly damaged by three earthquakes between AD 956 and 1323, it then became an abandoned ruin and, by AD 1480 after further damage by earthquakes, it was gone. 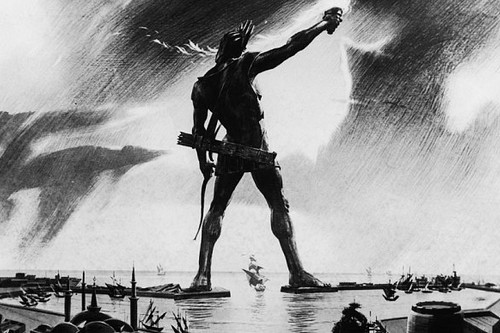 A 110 feet tall statue honored the Greek sun god Helios, erected in the city of Rhodes, by Chares of Lindos in 280 BCE. One of the Seven Wonders of the Ancient World, it was constructed to celebrate Rhodes’ victory over the ruler of Cyprus. Before its destruction in the earthquake, the Colossus of Rhodes stood over 110 feet (33 metres) high, making it one of the tallest statues of the ancient world. According to the historian Strabo, it remained a popular tourist attraction even in ruin. 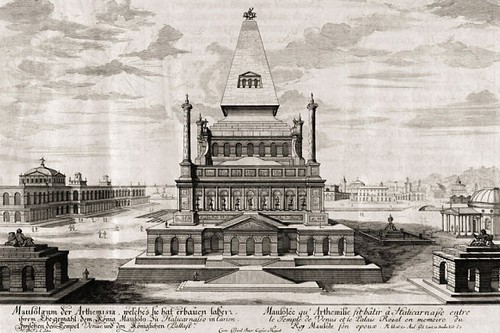 The Mausoleum at Halicarnassus was a tomb built in Fourth century BCE for the King Mausolus, and his sister-wife Artemisia II of Caria.

The Mausoleum was approximately 135 feet (41 metres) tall, and the four sides were adorned with sculptural reliefs. Mauslos and his wife chose Halicarnassus as their capital and devoted themselves to making it the most beautiful and impressive city in the world. In 353 BCE, Mausolus died, leaving Artemisia to rule alone. As a tribute to him, she decided to build him a tomb so famous that Mausolus’s name is now the eponym for all stately tombs, in the word mausoleum. The construction was also so beautiful and unique it became one of the Seven Wonders of the Ancient World. She died two years after him and her ashes were entombed with him in the building. It was destroyed by a series of earthquakes, from the 12th to the 15th century, and lay in ruin until it was completely dismantled by the Knights of St. John of Malta in 1494 CE. 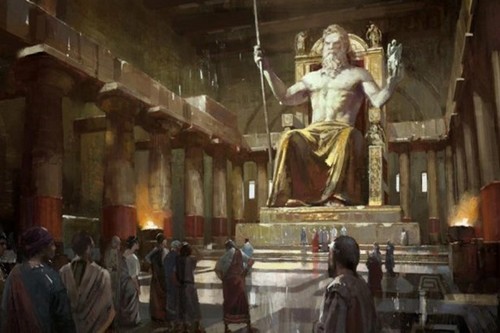 This 40 feet (12-meter) statue made by the Greek sculptor Phidias around 435 BCE, depicted the king of the Greek gods.

A sculpture of ivory plates and gold panels over a wooden framework, it represented the god Zeus seated on a throne with skin of ivory and robes of hammered gold. It’s also one of the Seven Wonders of the Ancient World, it was lost and destroyed destroyed at some point in an earthquake in the 5th or 6th centuries CE. with no copy ever being found, and details of its form are known only from ancient Greek descriptions and representations on coins.

3. Temple of Artemis at Ephesus, Turkey 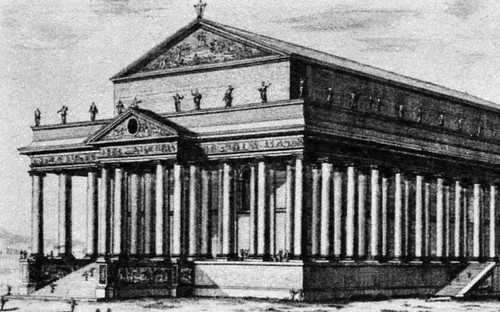 Also known as the Temple of Diana, this towering temple was built in 550 BCE to honor Artemis, the Greek goddess of the hunt.
The temple is described by every ancient with awe and reverence for its beauty. It was 425 feet high, 225 feet wide, and supported by 127 60 foot columns. One of the Seven Wonders of the Ancient World, it was completely rebuilt three times before its eventual destruction in 356 BC by a man named Herostratus who set fire to the temple in order that his name be remembered.

The Hanging Gardens were a distinctive feature of ancient Babylon. If they existed as described, were built by Nebuchadnezzar II about 600 BCE as a gift to his Median wife, Queen Amytis. The gardens are believed to have been a remarkable feat of engineering – an ascending series of tiered gardens containing all manner of trees, shrubs, and vines. They were destroyed by an earthquake sometime after the 1st century CE.

The Hanging Gardens of Babylon was one of the Seven Wonders of the Ancient World, and the only one of the wonders that may have been purely legendary. Legend has it that these gardens were said to have looked like a large green mountain constructed of mud bricks, but many experts say it never really existed. 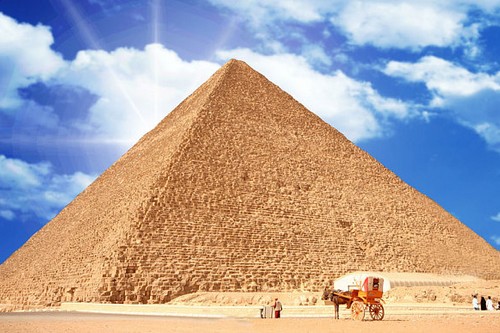 The Great Pyramid at Giza was constructed about 2,600 BCE for the Egyptian Pharaoh Khufu. It is the oldest and largest of the three pyramids in the El Giza, Egypt. It is the oldest of the Wonders of the Ancient World, and the only one still standing today. It was the structure itself with its perfect symmetry and imposing height which impressed ancient visitors. It was the tallest man-made structure in the world for almost 4,000 years.

See Also;
10 Oldest Buildings in the World.
10 Most Famous Cultural Monuments Around the World.