Sculptures are usually created as an iconic symbol. Around the world, monuments are built to commemorate memorable historical figures, an extraordinary life, deities and special event. Sculpture has the power to leave observers in a state of absolute amazement. Furthermore, they leave you with a feeling of great surprise or wonder. But standing beside a supersize statue can actually take your breath away.

Taking many years to build and millions of dollars to create, these 20 enormous monuments and statues do just that. From the world’s tallest Laykyun Sekkya Buddha to a 26 ft tall sculpture of Marilyn Monroe, these are some of the world’s massive statues. They’ll stand here for centuries as icons of history and culture for visitors to enjoy.

Chinese artists spent two years creating this 26 feet tall, giant sculpture of Marilyn Monroe’s famous scene from the 1955 film “The Seven Year Itch.” The statue has been displayed in several locations in the USA as well as in Australia. 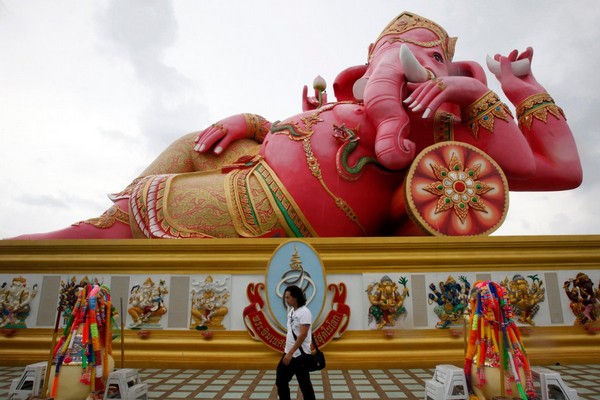 This bright pink statue of Ganesha — one of the largest ganesha statue in the world. This beloved Hindu god measures 52 ft high and 78 ft wide. The giant statue sits in the Chachoengsao province of Thailand.

18. The statue of Mevlana Rumi 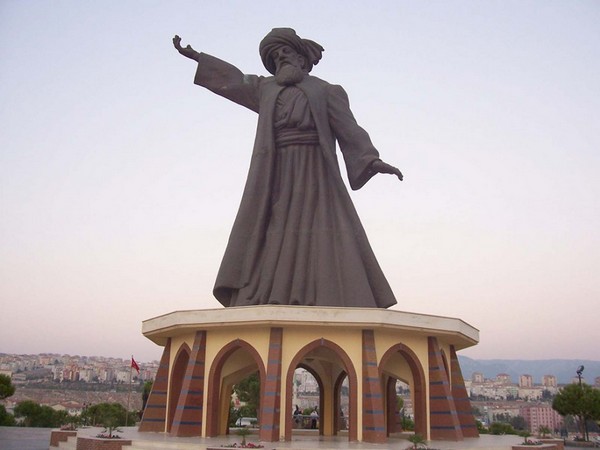 The statue of Mevlana Rumi (a 13th-century Muslim poet, jurist, Islamic scholar, theologian, and Sufi mystic) is 66 feet in height, including its foundation. This amazing statue was designed and built by the sculptor Eray Okkan. 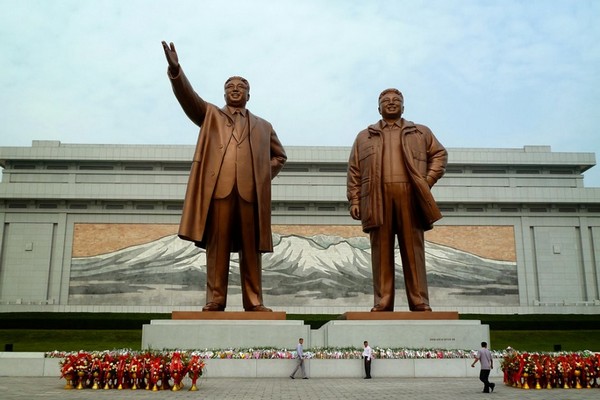 The central part of the monument are two tall statues of North Korean leaders Kim Il-sung and Kim Jong-il, made of bronze. Originally comprising one statue, that of Kim Il-sung covered in gold leaf, but this was later altered to bronze. Finally, the site was expanded to include a statue of Kim Jong-il in 2012 after the leader’s death. Standing 73 feet in height, the original was completed in 1972.

16. The Christ the Redeemer 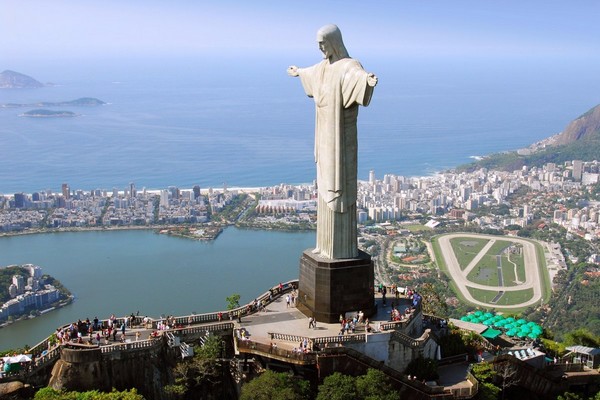 The Christ the Redeemer is an awe-inspiring statue of Jesus Christ, located in Rio de Janeiro, Brazil. The statue scales more than 2,000 feet above the city to offer visitors most stunning views. Standing at the 100 feet in height, statue’s awe-inspiring scale and design resulted in its recognition as one of the seven new wonders of the world. 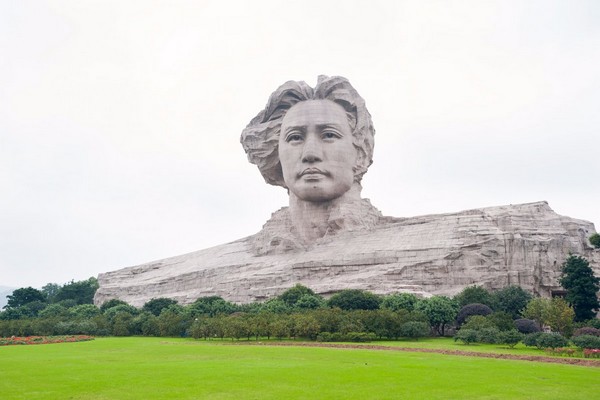 This statue, stands more than 105 ft in height, perched in China’s Hunan Province. The monument depicts Chairman Mao Zedong head at the age of 32. The work is said to have cost as much as $35 million to build.

14. The Merlion of Sentosa 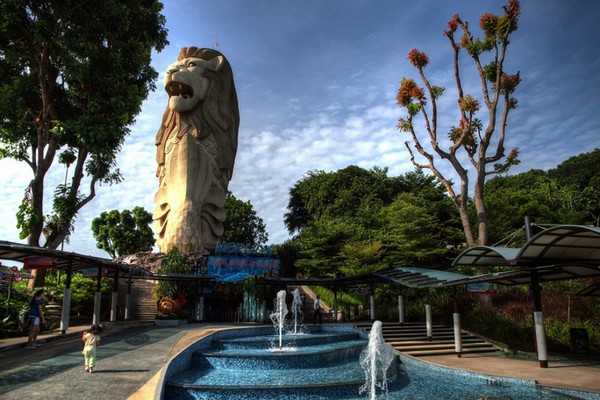 The Merlion of Sentosa, standing on Singapore’s Sentosa Island, is a 121 feet tall sculpture. The statue seems like a mythical creature with a lion head and fish’s body. Also, the Merlion (lion city) is the national personification of Singapore. 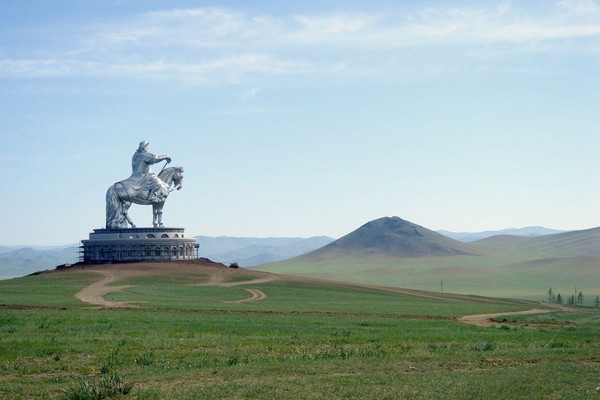 The Genghis Khan Equestrian Statue, 130 feet tall statue of Genghis Khan on horseback. The statue sits on top of the Genghis Khan Statue Complex on the bank of the Tuul River. It cost as much as $5 million to build, and erected in 2008. Visitors can walk up to the head of the horse through the statue’s chest and neck, where they have a panoramic view.

This rock sculpture of the face of Decebalus, the last king of Dacia, is carved on a rocky outcrop on the river Danube, at the Iron Gates near the city of Orsova in Romania. The more than 130 feet high sculpture is the tallest rock sculpture in Europe. 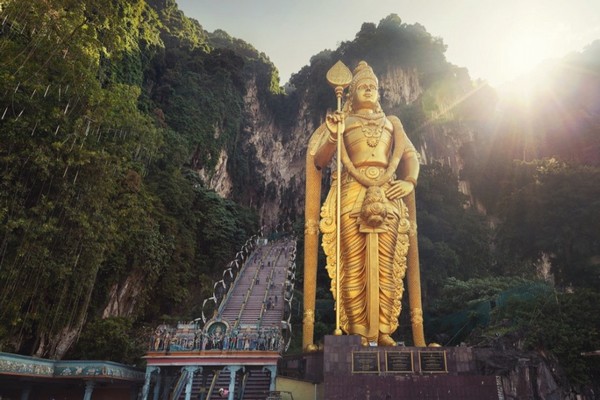 This Lord Murugan statue presides at the entrance of the Batu Caves of Selangor, Malaysia. Made with 250 tons of steel and 300 liters of gold paint, the 140 feet sculpture is said to be the world’s second tallest statue of a Hindu deity. It’s also the tallest statue in Malaysia. 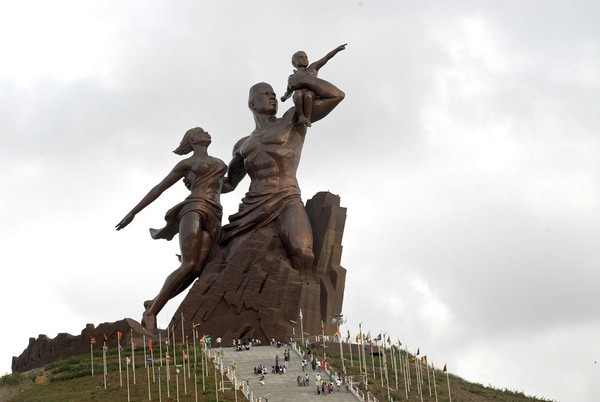 Standing 160 feet in height, the African Renaissance Monument built overlooking the Atlantic Ocean in the Ouakam suburb. The giant statue depicts a man and woman, with a child held in the man’s left arm. It cost as much as $27 million to build and took four years to complete. The statue attracted much controversy during the building process. It is also the tallest statue in Africa. 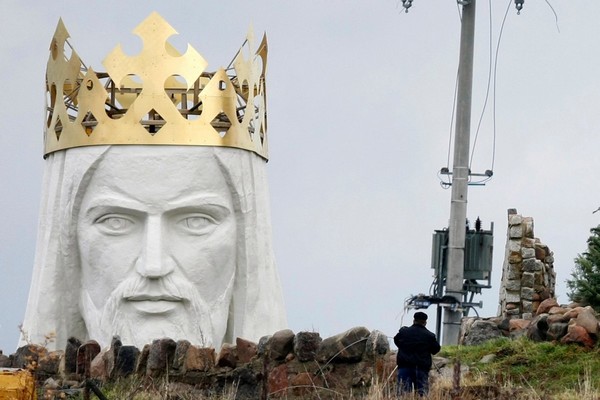 The Christ the King monument of Swiebodzin, Poland, stands 172 feet high. It was created using donations made by the town’s residents. Its crown alone is more than 10 feet high. 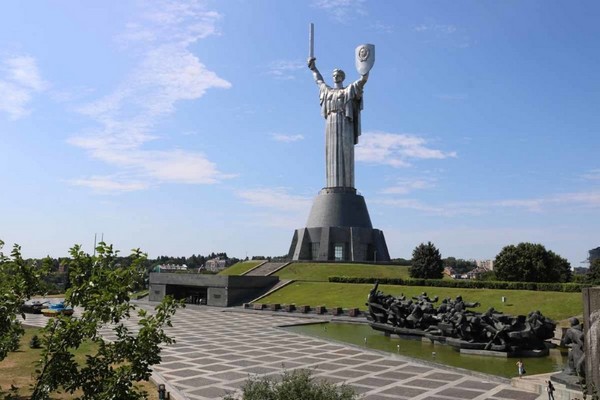 The Motherland Monument is a monumental statue in Kiev, Ukraine. Standing at more than 200 feet in height, the statue celebrating the Soviet Union’s victory over Nazi Germany. Because of its colossal height, the statue can be seen from various points of Kiev. 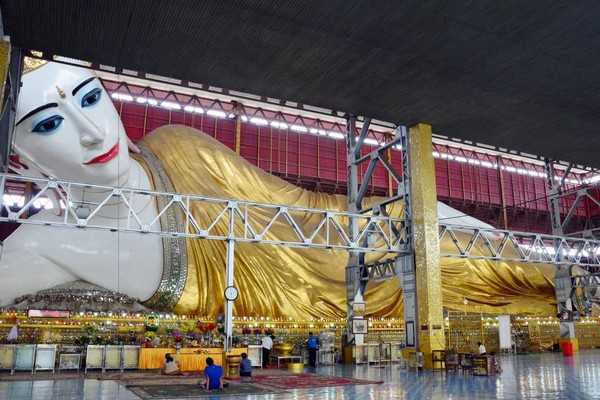 The Chaukhtatgyi Buddha is a giant reclining buddha housed in a temple in Yangon, Myanmar. The statue is more than 217 ft long. Because of it’s massive size, the statue is one of the largest in Burma. Consecrated in 1973, it is a stunning work of art, from its golden robe to its diamond encrusted crown. 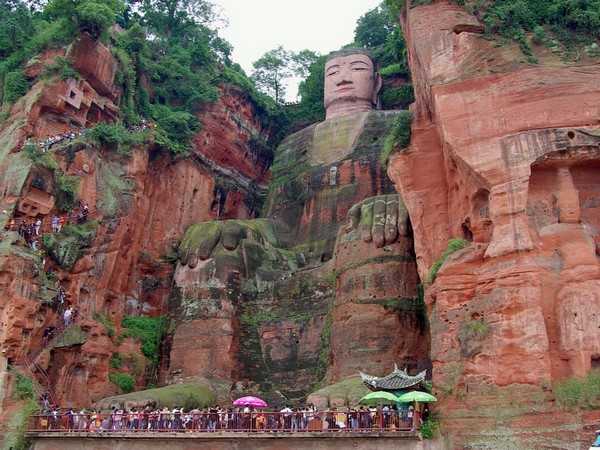 The 233 feet in height, Leshan Giant Buddha stone statue was built during the Tang Dynasty. The statue carved on the hillside of the Xijuo Peak, overlooks three of China’s rivers (Minjiang, Dadu and Qingyi). In addition to the UNESCO World Heritage Site, It is the largest stone Buddha in the world. It is built with incredible detail; over a thousand buns were made to create the Buddha’s coiled hair. 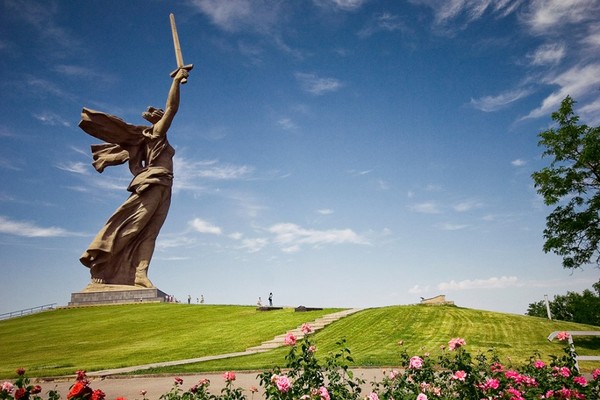 4. The Statue of Liberty 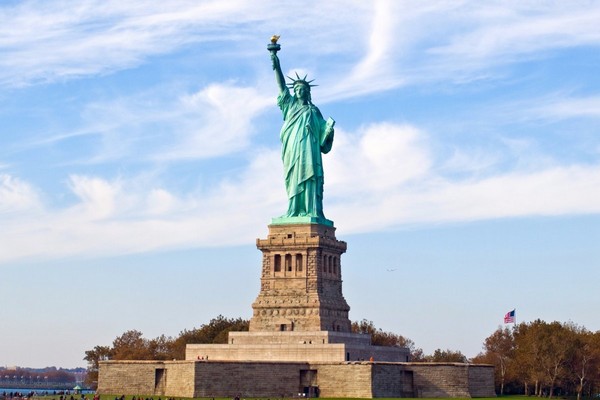 The Statue of Liberty stands high and mighty in New York Harbor’s Liberty Island. The 305 ft statue (from ground level to flame tip) was a gift from the people of France to the people of the United States. The Statue is a robed female figure representing Libertas (Roman goddess). She holds a torch above her head, and carries a tabula ansata in her left hand. 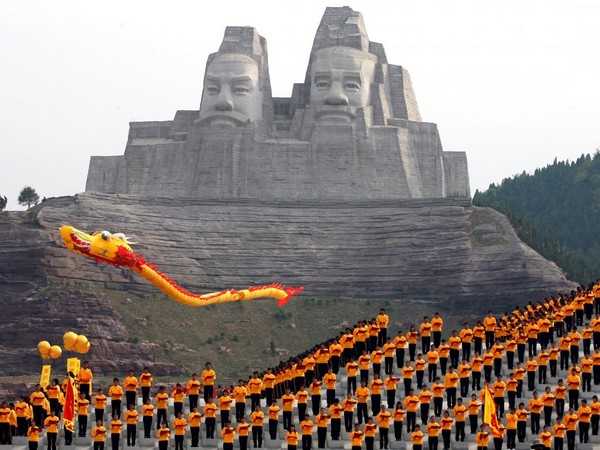 This more than 347 ft high sculptures, entitled “Emperors Yan and Huang,” is the fifth tallest statue in the world. The statues located in central China’s Henan province. In addition to its amazing look, the statue commemorate politics and the economy. 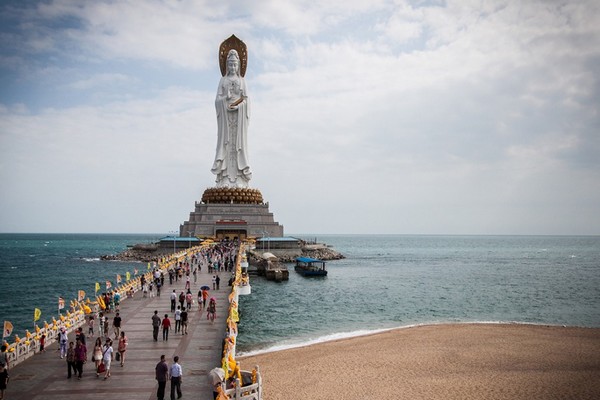 The statue of Guanyin of the South Sea of Sanya measures 354 ft tall. In addition to it’s outstanding design, it is the fourth-tallest statue on Earth. The stunning statue has three aspects, all holding different poses, one side faces inland and the remaining two face the South China Sea. 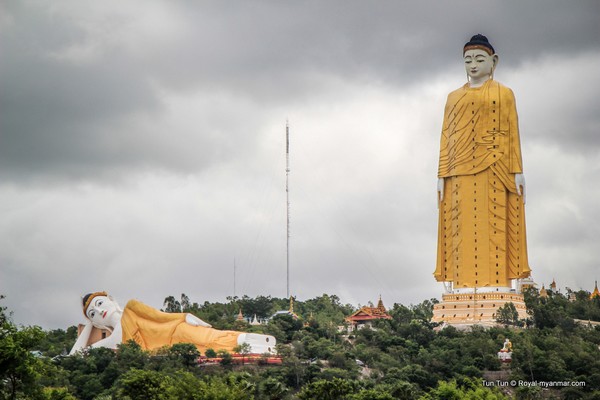 At more than 380 ft tall, Myanmar’s Laykyun Sekkya Buddha is the second tallest statue in the world. The statue, which depicts the Gautama Buddha, built on top of Po Kaung Hills. The construction took nearly 12 years. At its foot is the “Monywa Buddha” — the largest reclining Buddha in the world.