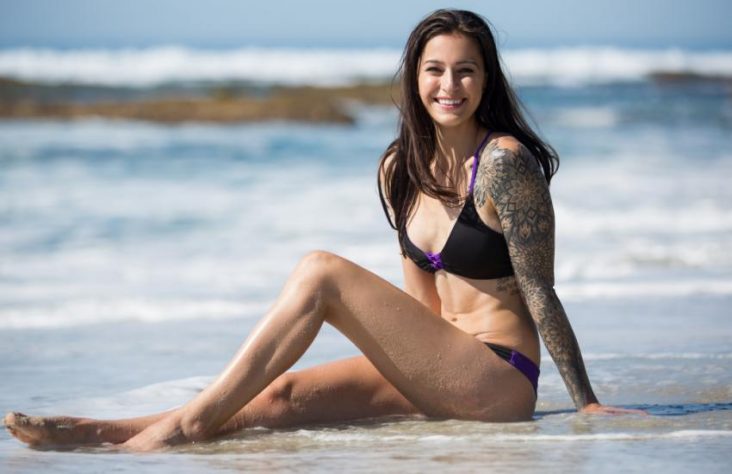 Woman! This is a word that means different things to different people. A woman is the foundation of any society because she bears the children that will one day grow up to become the society. However women are almost always attached with stereotypes and their efforts are undermined and overshadowed by the men. Women are thought to just stay home, have children, cook food and serve others. But the woman of today is all that and much more. She can excel at work outside the home the same way she does at home.

Sports women have been shutting people up and breaking stereo types. Sports is still a heavily male dominated area and girls are discouraged to take part in them. But every now and then a girl steps out of her home to pursue her passion is sports and makes her nation proud. That is when all these haters shut up and start praising them.

Today we’re going to look at the top 10 gorgeous sports women who broke all stereotypes.

Being from a country where conservative dressing is followed Sania Mirza turned heads when she started playing tennis in the usual tennis attire. Many people talked and she received a lot of backlash but she continued to play and brought many awards home. She has also been ranked number 1 in the women’s’ doubles rankings.

Beautiful girls with blonde hair are thought to love makeup or girly stuff. But Alana Blanchard breaks all the norms and shows how you can be sporty yet beautiful and sexy at the same time. Alana is a top ranked pro surfer with many championships under her name. Not only has this she also modeled balancing the two worlds perfectly.

Parkour videos are probably one of the most searched videos on YouTube and rightly so because it is crazy what these people can do . I mean men because we don’t see women doing it. However Amanda Voll is experienced and is great at it. She is also an instructor and teaches people the risky sport. There is no stopping her.

We always see guys on skateboards looking cool and doing mad tricks. However girls aren’t very in on the skateboarding scene. Lizze Armanto is not one of those girls. Being given a skateboard at the age of 14 Armanto fell in love with it and never looked back. She has bagged more than 30 awards in competitions and continues to win.

Ashley Fiolek breaks all stereotypes which say people with disabilities can’t take part in sports. Fiolek was born with deafness but that has not stopped her from becoming a killer motocross racer. Fiolek has many medals under the belt and continues to wow us all.

People think 15 year old girls only talk about boys, makeup and school troubles but not Meagan Ethall. She is not your average 15 year old girl. Meagan began wakeboarding at an early age and at 18 was titled the best female wakeboarder in 2015. She is also working with many famous brands like Red bull and Liquid force.

Ever heard of a female BMX racer? Well now you have. Shanaze first began racing at local BMX tracks and soon got bored of beating all the boys there. She deiced to go big and began racing in motocross with men in 2005 for a National Championship. She won the British No.1 in the 19 and over elite men category. Now that is seriously badass. You go girl!

Snowboarding is a risky sport and is mostly dominated by men just like all the dangerous sports where women are told not to take part in because they’re ‘weak’. However Kelly Clark broke the stereotype and started snowboarding since she was 7. 11 years later at the age of 18 she became a part of the US national team and won a gold. Who says women can’t snowboard?

Mary Kom is an Olympic Indian boxer who is a five time world amateur boxing champion. Coming from a country where women are supposed to stay home and cook, Mary Kom got out and pursued her dreams. She also broke the stereotypes of women staying home after having babies, by continuing to play even after having three children.