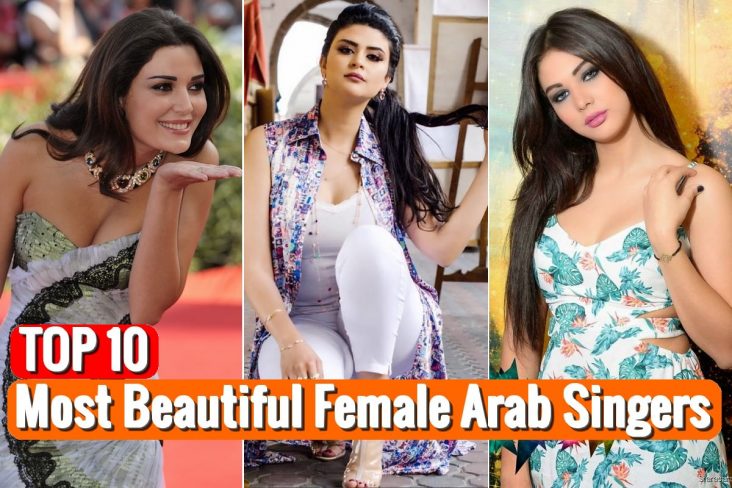 Former Star Academy contestant, Amani Swissi is one of the most beautiful female Arab singers. Amani Swissi born on April 11 , 1983 in Sfax. This cute Tunisian star hold the 10th place in our list.

Amani Swissi had participated in the second season of the talent show Star Academy in 2004. She was one of the students who qualified for the final shows and was selected top candidate twice during the season. But not lucky enough at the final stages, as she received 48% of votes compared to her Saudi rival, winner of the season Hisham Abdel Rahman with 51%.

Nancy Nabil Ajram is a Lebanese singer. Born on May 16, 1983 in Sahila Village, Mount Lebanon Governorate. She has multiple platinum awards and also won three international music awards. Best known for her platinum music songs. Nancy performed bilaterally with the Lebanese director Nadine Labaki in songs that are well known on the Lebanese and Arab levels, such as: “I fight against you ah”, “oh peace”, “oh and text”, “oh plump, oh dala”, “chakhbet shakhabit”, “ What are you thinking about”. Her song “A New Feeling” found the approval of the masses.

Nancy had a huge hit with albums: Hey, Peace in 2003, Oh & Text in 2004, and in the early 2000s she did advertising deals with companies like Coca-Cola, Damas Jewelery, and Sony Ericsson.

Myriam Fares, born on May 3, 1983, is a Lebanese singer, actress and model. Her fame is not confined to Lebanon only, but rather from the Arab world first class. And, she is famous for many songs such as “I and the longing” and “The comfort of your comfort” and “his place is where” and “er what happens” and others, especially the music videos that contain the spectacular scenes.

Shatha Amjad Al-Hassoun was born March 3, 1981 in Casablanca, Morocco. She is an Iraqi-Moroccan singer who was famous for winning the fourth season of the Star Academy talent program in 2007. And she is considered the first female to win the Arabic version of the program. Currently, Shatha Hassoun is one of the most famous singers in the Arab world. In addition, she is known as the “Girl of the Two Rivers”.

Ibtissam Tiskat (born October 3, 1992, Fez) is a Moroccan singer who participated in Arab Idol Season 2, Star Academy Arabia – Season 10. She released several songs, the first of which was “Nadir Mapgit”, and she recently participated in a Moroccan movie called “Alo Ibtisam”, starring alongside many Moroccan stars.

Samira Said is no doubt one of the most beautiful female Arab singers of all time. The 62 years old Moroccan singer graces this list at 5th place. She lives in Egypt and holds Egyptian citizenship. She was born in Rabat, and is considered one of the oldest Arab artists who continues to this day. Her artistic career began when she was only 10. Where she participated in a talent program on Moroccan television, sang for Umm Kulthum and drew her all the attention to her voice energy. At the age of ten she released her first single, “My God”, which was presented to her by Abdel Nabi El Gerari while she was participating in the Talents Program.

This song was also sung by her voice later, the Moroccan artist Latifa Amal. And Samira, then recorded the song “Glory to God” composed by Abdel Salam Amer, which was then sung by the artist Abdel Hadi in dressmaking. She than participated in a TV series presented by Nizar Mouyad Al-Azem through 6 episodes. The series is in Ain El Shaq studios in Casablanca, and a series of works such as “Qais and Laila”, “We complained to our loved ones” and “Qul Maliha” were presented in the series through her participation in the series “Art and Literature Councils” that was shown at the beginning of 1969.

Balqees is a prominent Yemeni singer in the Emirates. The 31 yeas old beauty also holds Emirate nationality. Balqees is the daughter of Yemeni singer Ahmed Fathi. She began to love singing since her childhood. And she was playing musical instruments since she was too young. Discovering her talent and her parents who encouraged her to practice singing work, especially her father, who encouraged her from this age. She hold 4th spot in our list of most beautiful female Arab singers.

Syrine was born in Abadiyeh, near Beirut, in the year 1977, to a Christian family. Although she’s 43 but looks hot as she was in 30s. She studied at the Saint-Courrier school, then enrolled in an accounting institute. After graduating in November 1993 she began working in the field of fashion shows. Cyrine Abdelnour is a Lebanese singer, actress and model. The singer Syrin became famous in the Arab world after she released her album “One Night From Nights” in 2004. While her entry into the fashion show was the door that led her to acting and success.

This Lebanese singer and actress is ranked second among the most beautiful female Arab singers. She also top the the ranking of beautiful Muslim women as well as hottest middle eastern women. On People Magazine’s 50 most beautiful people list, Wehbe spot on top places several time. Although she’s 48 now, but look as gorgeous as she was in her 30s.

Salma Rachid, top the list of most beautiful female Arab singers. A Moroccan artist; Born on June 13, 1994 in Casablanca. She was a university student in the Economics Division and changed the destination to the media because of his proximity to her artistic field and to achieve a hidden desire in herself from a young age. The fans called her “Cinderella” and “Sultana”. In addition, she is noted as Umm Kulthum among her main inspiration.