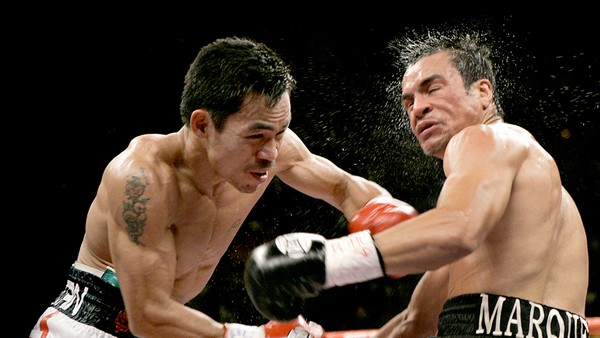 The sweet science, as a competitive sport, is not free from its own share of controversial decisions. Until today, there is no exact science how to score a boxing match. How exactly do you score a tactical match between a brawler and a tactical boxer? Until today, the boxing commissions use the 10 point must system to determine a winner of a professional boxing match. But controversial boxing decisions aren’t limited to scoring problems. It also ranges from close matches to pre-mature stoppages. Over the years, we had our share of these matches. Here are top 10 controversial boxing decisions on our list!

There wasn’t a single boring fight between Manny Pacquiao and Juan Manuel Marquez. The Filipino slugger was fresh from his KO victory versus Marco Antonio Barrera when he fought Marquez for the first time.

The first time Manny Pacquiao and Juan Manuel Marquez faced each other in 2004, boxing fans witnessed the birth of an epic rivalry that would span for a decade. Both fighters had their share of moments. Pacquiao would knockdown Marquez in the first round three times, only to have the fight end in a draw.

You may argue that the fight was a 12 round match and Marquez had some moments. On the other hand, what makes this match in our list of top 10 controversial boxing decisions is the mistake of a judge on his scorecard. Instead of scoring the first round 6-10 in favor of Pacquiao for the three knockdowns, he scored it a 7-10.

Sugar Ray Leonard was down twice in this encounter with Tommy Hearns. He was almost finished in round 7. On the other hand, he had his chance to comeback and rocked Tommy Hearns in the 5th round. He also had his moments in the last round.

The decision ended in a controversial draw. What makes this fight controversial is the decision of one of the judges to score the last round 10-8 in favor of Sugar Ray Leonard despite the absence of a knockdown.

Before he was Money Mayweather, he first showcased his speed and athletic ability in the lighter weight classes. But one his most controversial boxing matches is his bout against Jose Luis Castillo in 2002.

Floyd Mayweather mentioned in his interviews that he hurt his hands during his match against Castillo forcing him to hold some of his punches.

This fight became a defining moment for future matches of Floyd Mayweather, as future opponents such as Victor Ortiz, Oscar Dela Hoya and Ricky Hatton would do the same thing to Floyd and win some rounds in the process.

During the last round, Oscar rarely threw a punch. However, he won on one of the judges’ scorecard. It has been viewed by many boxing experts as an attempt to at least make the fight look close on their scorecards. Oscar Dela Hoya would later lose matches against Mosley and Bernard Hopkins.

Whitaker has been known as a slick boxer. Against Mexico’s Julio Cesar Chavez, he displayed exactly what stick and move boxing is all about. He managed to win rounds against the Mexican legend with flurries of combination and fast movement across the ring.

Julio Cesar Chavez at this point looks battered against the slick Whitaker. However, what made this particular match in number 6 of our top 10 controversial boxing decisions is the fact that Chavez remained undefeated after this night. The fight ended in a majority draw despite the lopsided performance.

In 2012, Manny Pacquiao faced Timothy Bradley. Manny Pacqiuao is considered by many at this point as the number one pound for pound king. He was able to knock out Ricky Hatton, demolish Miguel Cotto and even injure the eye of a bigger Antonio Margarito. At this point of his career, boxing fans have speculated for years that Manny Pacquiao is the guy to beat Floyd Mayweather.

In this night, things wouldn’t go Manny Pacquiao’s way. Manny Pacquiao lost to Timothy Bradley. Despite throwing more effective punches against Bradley, Pacquiao was at the losing end of the split decision. They would later face each other in two separate occasions, Manny Pacquiao beating Bradley decisively in those two occasions.

However, this match probably lowered the bargaining power of Manny Pacquiao against Floyd Mayweather when they faced each other in 2015.

Another Manny Pacquiao fight that made it in our list of top 10 controversial boxing decisions is Pacquiao versus Marquez 2.

In 2008, Manny Pacquiao and Marquez faced each other for the second time. And just like the first one, fans weren’t disappointed with what they saw. It was Manny Pacquiao working his blitzkrieg of power punches while Juan Manuel Marquez times the counter punches against the Filipino slugger.

But just like the first encounter, Manny Pacquiao and Juan Manuel Marquez will then face another controversial decision from the judges. Manny Pacquiao was able to knock down Marquez in the third round and was able to apply pressure in a back and forth fight between the two men.

In the end, it was Manny Pacquiao walking away with the decision. According to compubox, Pacquiao landed 172 of 511 punches. Marquez, on the other hand, landed 157 of 619 punches. It was a closely contested match that there were different opinions regarding the fight. Marco Antonio Barrera had the match a draw in the unofficial score cards.

The two men will face each other again in two more matches. The next one having Pacquiao as the winner while the last one Marquez putting Pacquiao to sleep on the canvas.

After experiencing loses from Tito Trinidad and Shane Mosley, the Golden Boy wished to take on other big names. The next person on his list was Bernard Hopkins. But in order to face Hopkins, Oscar Dela Hoya would need to pack some weight into middleweight.

Number two in our list of top 10 controversial boxing decisions is Toney versus Tiberi in 1992. James Toney is known for his slick boxing style. Though talented with fast boxing reflexes and great knowledge of the sweet science, James Toney is also known for overeating even during his training. He would later find himself in the heavyweight division because of this.

Multi awarded trainer Freddie Roach also has the same opinion on James Toney saying that he was the most talented pupil he ever trained.

In 1992, James Toney faced Dave Tiberi. Unfortunately for James Toney, he had to cut a tremendous amount of weight prior to their fight. Dave Tiberi barraged the dehyrated James Toney 439 to 290 effective punches after the whole 12 rounds. Despite the clear margin in the number of punches landed, James Toney walked away with the split decision that night.

Before Roy Jones Jr entered professional boxing, he was first known in the amateur circuits. Roy Jones Jr was also an Olympian. In 1988, Jones fought against Park Si Hun. Despite a dominating performance by the 19 year old Roy Jones Jr, he fell victim to one of the worst and most controversial decisions in boxing.

What made this as the number one of our top 10 controversial boxing decisions is the fact that the officials dined with the judges the night prior to the fight. They were suspended after this incident. Unfortunately, the International Olympic Committee did not reverse the decision.

You may argue that there is no exact science to measure the sweet science. However, there are matches that can easily be called lopsided. Could this be the last of the bad decisions in boxing? With politics and other factors involved, there will be more controversial decisions in the coming years inside the squared circle.