For any woman, there are 4 words that can sweep them off their feet and bring tears to their eyes. “Will you marry me?” is the international question of love. Proposing is an act that needs to be carefully planned out and should carry a bit of surprise to make it even more special. While some choose the cliché styled proposals like the ring in a glass of champagne or in a piece of cake, others like to make it different and extravagant. From proposals on the giant television screens in sports games to hiring a pilot to fly over with a “will you marry me” banner flying off the end of the aircraft. Taking it to a whole different level, these 10 extreme wedding proposals have changed the way men think about popping the big question.

10. An Exhibition of Art to Win the Heart 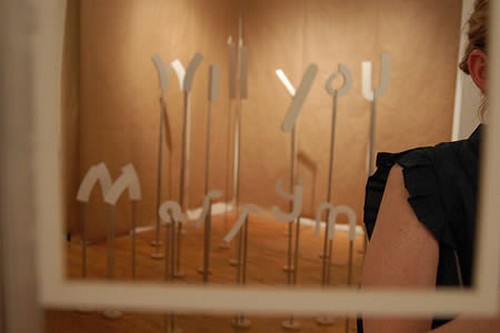 George, an industrial engineer finally plucked up the courage to ask his girlfriend, Sara to marry him. He wanted it to be romantic and well thought out, while making the proposal a work of art. He spent 24 hours out of 4 days in front of his computer and designed a 3D exhibition. After the design was complete, he cut foam with the help of a laser cutter to form the words “will you marry me?” He smartly named the piece “My Early Muir Owl” which is an anagram for “will you marry me”.

All he had to do now was hire an actor to play the artist of the piece. Once that was arranged, he named him “Serge Gandaora”. His name was an anagram for “Sara and George”. As Sara was asked to look at the piece through special frames, she saw the words form right before her eyes and looked at George who had already taken a knee beside her. She obviously said yes and accepted the ring with a tear rolling down her cheek.

This proposal made Romeo and Juliet look like puppy love. It was so well planned out and orchestrated that it cost about £10,000. Gennady Zaleskiy from Ukraine decided to ask his girlfriend to marry him by having the play The Romantics performed at the Zaporozhie. Not only that, he played the lead and ensured that his girlfriend, Victoria, would be at the play. It was not that hard because she was an avid theater fan and as a “girl’s night out”, she and her friends went to watch the play.

During the play, Zaleskiy wore a mask and at the end, when he was supposed to declare his undying love for his on stage lady, he turned to his girlfriend and said “No, the woman I love is called Victoria and she is in the sixth row. Will you marry me Victoria?” She was absolutely stunned and accepted with an overjoyed “yes”.

8. Who Else but Tom Cruise (Show Me you’re Honey) 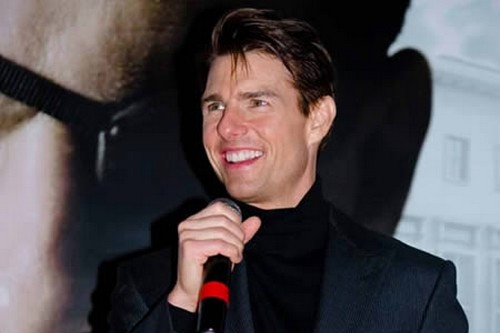 When you get film star Tom Cruise to ask your special lady to propose on your behalf, there can never be a “no”. In 2004, Cruise went on TV in Portugal and asked Sonia to marry cameraman Joao Martins. Martins were shooting for Cruise’s Spanish premiere of The Last Samurai when Martins requested the actor for this favor. Apparently Cruise is a big romantic at heart and agreed. On a local channel, a clip was played where Cruise said “Sonia, you have to marry Joao. Please marry Joao. He is crying behind the camera.” Obviously, Sonia said yes while Joao was on the phone with her as the clip aired. In the end of the proposal, Tom Cruise joked and said that they should name their first child after him 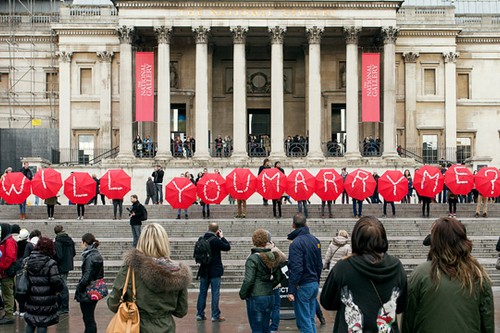 This proposal is like something out of a romantic love movie. Sean Palmgren had won “best proposal” on a website for this. He decided to ask his girlfriend Betsy to marry him and made sure to get all their friends and family involved. He told them each to hold an umbrella and walk in the park. Also, he made them paint an alphabet on each umbrella and waited for the couple to finish their 3 mile walk around the lake.

When they reached the people with umbrellas over their heads, Betsy got curious and told Sean that they should take a closer look. When they reached about 100 feet away, someone called out “1-2-3 and the friends and family lowered the umbrellas in front of them to reveal “Will You Marry Me”. At this point, Betsy said “look, someone is proposing” but when she looked at Sean, he was on one knee and she realized it was for her and she said yes. 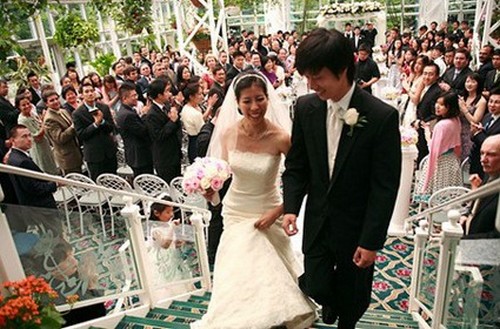 It is one thing to make your proposal unique but it’s a very different thing to hack into a video game and add your proposal to it. That is exactly what Bernie Peng did for his girlfriend Tammy Li. Peng who was a programmer hacked into and designed the game Bejeweled so that when his girlfriend reached a certain score, a digital sapphire ring and his proposal would drop down. Peng ensured that the score he set was low so that she could easily reach it and when she did, he was ready with a real pink sapphire engagement ring for her. While most companies would be annoyed at a person hacking into their stuff, the creators of the game were impressed with his proposal and even paid for a part of their wedding. 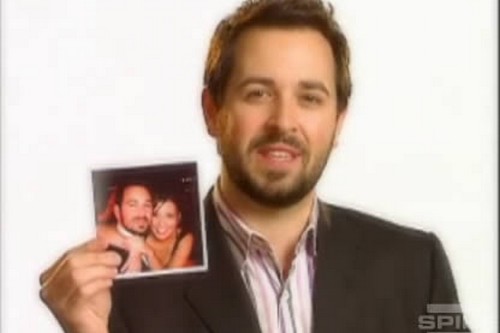 A lady always wants a big public proposal that makes her feel like she’s the only one in the world and this one does just that. Rand and his girlfriend Geraldine had been dating for 5 years before he decided it was time to take it further and seal the deal. He wanted it to be big and something she would never forget. Rand was a huge NFL fan and believed that proposing during one of the commercials of the Super Bowl would be the perfect way but he knew collecting the cash would be one of the biggest hurdles he would face.

Rand worked in a company that was involved with online search optimization and viral videos which was a perfect medium to raise the funds. In August 2006, Rand began his plan and created a website that told viewers of his story and his plan of the Super Bowl proposal. He began getting a lot of attention as well as donations. Rand soon discovered that in order to buy ad space for the Super Bowl, he needed a total of $2.5 million and by the 1st of February 2007, he had only $85,000.

Although he put in a big amount of his own cash in, he could not even come close to the actual amount. The cash he had would be enough for the invitations but not for ad space. Most of the television networks heard about Rand’s idea but refused to air his proposal for such a small amount. So, he bought some local air space during Veronica Mars which is Geraldine’s favorite. On the 6th of February at 9:23 pm, Rand’s ad aired during the show and Geraldine was caught by surprise and happily said yes.

4. Falling In Love While Falling to Earth 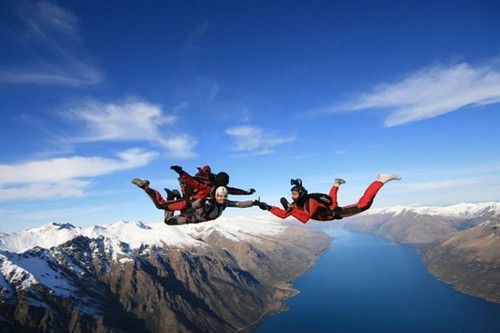 This proposal takes “taking proposals to another level” to another level, a level about 20,000 feet above the Earth. Mateo Martinez decided that the best time to ask his girlfriend to marry him was just before they jump out of an airplane at 20,000 feet. According to Mateo, “There is no better way to get your heart rate up than jumping out of a plane and proposing to your girlfriend,” Well it is important to know she said yes but not really sure if she said yes because of love or because she didn’t want to die single (just kidding).

3. Your Love Is Burning Me up 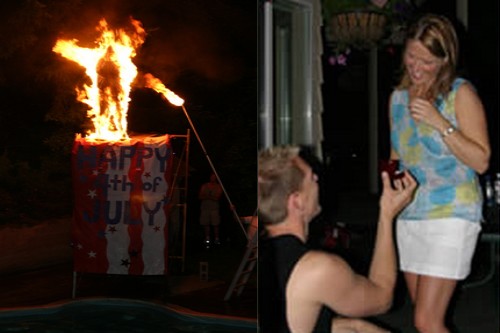 DO NOT TRY THIS AT HOME: Outdoors is fine!

Todd and his stunt man friend, Eric planned a proposal for Todd’s lady love Malissa that would leave her and all their family and friends in complete awe. Eric being a stuntman, arranged for all the preparations for Todd to be set on fire and jump into a pool. On their annual family reunion on the 4th of July, they made a platform above their pool and Todd was dressed in the proper fire proof material. Eric used an aluminum pole to set Todd’s cape on fire and within seconds he was completely engulfed in flames. Todd ran across the platform and jumped into the night sky and straight into the pool.

The family and friends were astonished and excited as well. As he landed, the flames died out. He came out, removed his mask and got down on one knee and said “Malissa, you make me hot. I want to get the point across that I’m on fire for you.” At first, she didn’t even know what was happening, with the even that just occurred but when he asked her to marry him and placed the ring on her finger, it all hit her. She said yes and he never set himself on fire again. 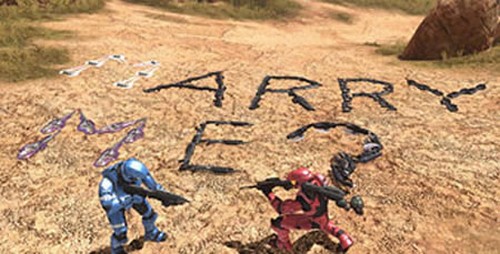 Video games usually make women angry when their men continuously play for hours but this couple could not be any more perfect for each other. Movie sign (the guys virtual name), designed a level in the popular game Halo 3 and told his girlfriend Furtive Penguin (the girls virtual name) who he was with for over two years, that they were going to have a two on two gaming session with two of his friends. As the game went on, Movie sign took Furtive Penguin to an area where he said he had left an energy sword.

But as they reached the area, it was a top down view area where he spelled out “Marry Me?” using weapons. He asked her to be his partner for life and she happily agreed. Although there is no wedding date set yet, Furtive Penguin said “We’re waiting to see what the release date is for the next Halo game. We don’t want any conflicts”. 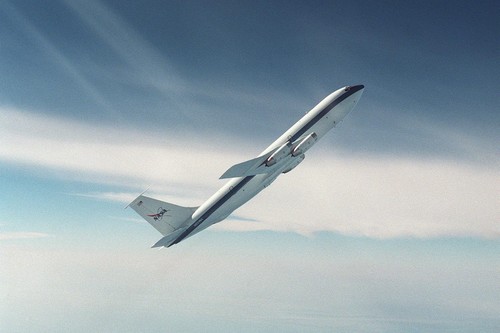 Graciela Asturias was about to celebrate her 27 birthday with her boyfriend, Alex by boarding a special Boeing 727 aircraft. This plane takes its passengers to 35,000 feet and gives them a near zero gravity experience. As the aircraft suddenly drops and lifts between 24,000 feet to 35,000 feet, Alex and Graciela along with the other passenger were left floating around the cabin. Alex took this opportunity to ask his lady love to marry him while they floated together in love thousands of feet above the Earth. Although Alex was a bit worried about the ring floating away, it all went well and she said yes. She had an amazing birthday as well as they shared their love in the most extreme way.

Here are some other related articles, you may also like; Things not to do towards wedding, How to handle wedding stress, 10 Unusual wedding traditions and world’s most expensive divorces.