As far as tourism is concerned, Georgia is a country that doesn’t feature much in the itineraries of most tourists. This quiet country that lies in the lap of the Caucasus Mountains in Eastern Europe offers a host of elements that rival any other famous destination. Tradition and modernity meet here to provide some fascinating experience to visitors. Georgia has grown to attract more than two million tourists a year lately. A major portion of the tourists come to spend their time in the beautiful capital city Tbilisi. But there are unexplored gems as well. Here are the top 10 places, the tourist attractions in Georgia. 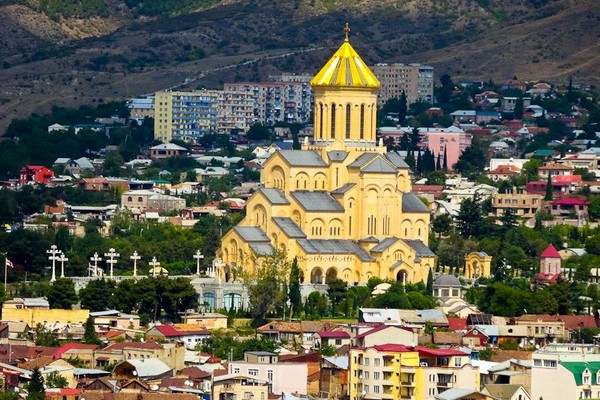 Despite its appearance as a medieval structure, the Sameba Cathedral in Tbilisi is a modern creation. Finished in 2004, it is the holy place of the Eastern Orthodox Church in Georgia. The building is a blend of various schools of architecture, yet sports a traditional look. It houses nine chapels, many of which are underground. Sameba Cathedral is now one if the principal destinations in the capital city. 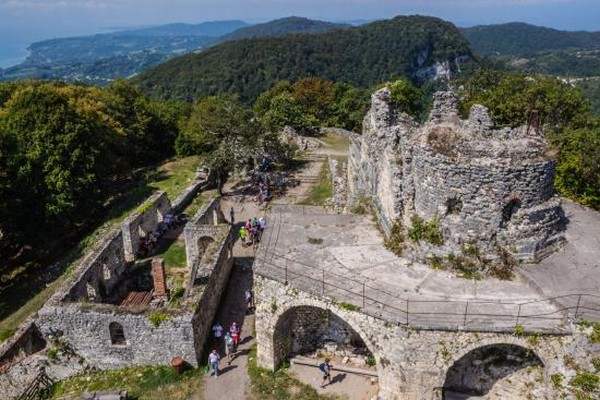 The fortress of Anacopia is an ancient military citadel dating back to 2nd century. Located on the Iverian Mountains in New Athos, it was built to block the invasion of Islamists then. Although it lost its tactical importance in later years, it has emerged as a significant cultural icon of the region. In the eighth century, Leon I of Abkhazia defended the citadel against a siege laid by Marwan II of Umayyad caliphate. 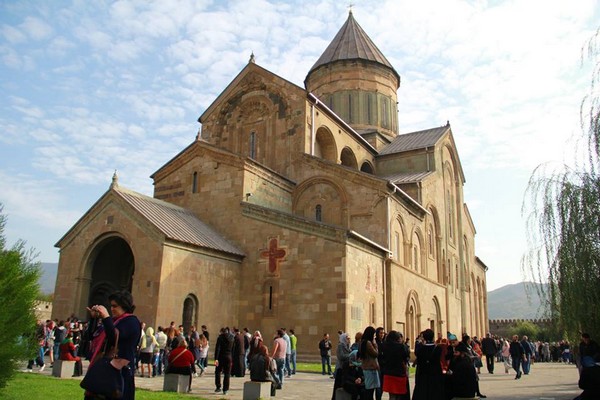 Located in the historic town of Mtskheta near Tbilisi, Svetitskhoveli Cathedral is a UNESCO world heritage site. The original church was built in 4th century although it doesn’t exist anymore. The current building was built in 11th century. The church has withstood various attacks from Persians and Russians over the years. An important monument for the Georgian Orthodox Church, it is one of the most popular tourist attractions in Georgia now. 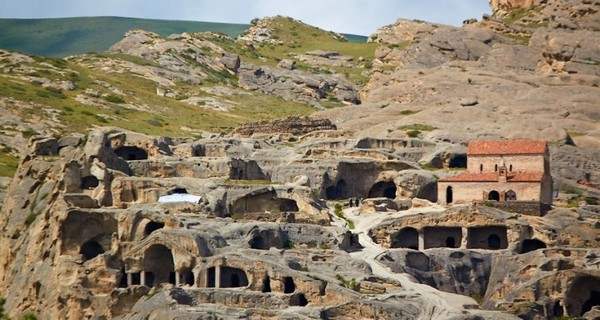 Literally meaning ‘the lord’s fortress’, Uplistsikhe is an ancient town made of rocks. Built on the banks of the Mtkvari river, several structures of the town traces their origin to Iron Age. It was once a significant symbol of the Christian culture in Georgia though became abandoned later. In 1920, a part of the town was destroyed in an earthquake. Although it is not as abundant in decorations compared to other famous caves, it is still a brilliant example of human willpower. 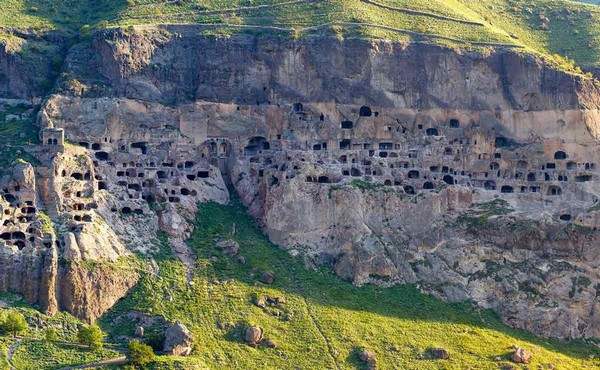 Vardzia is cave monastery located Erusheti Mountain on the bank of the river Kura. It is built in the 12th century and had been abandoned for a long time. The important site that housed by the complex is the Church of Dormition which is famous for its wall paintings. There are some four hundred rooms including several chapels. There is also a cemetery and even system for defense. 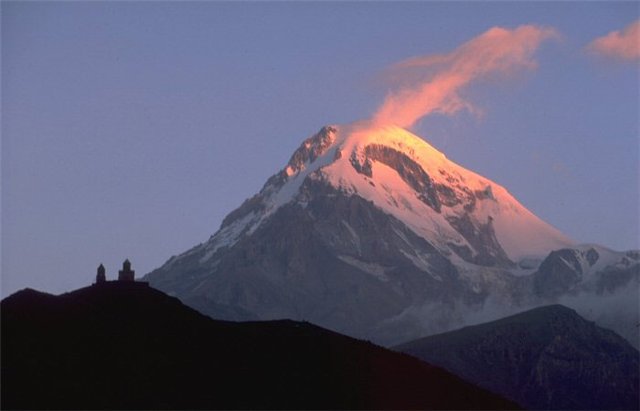 Georgia lies in the lap of Caucasus range. Mount Kazbek, located at the northern frontier of the country, is the one of the most important peaks of the range. Even though not the tallest, the snowy peaks are a favorite of trekkers and climbers. It was first scaled in 1868. It has also a seminal place in the Georgian folklore. The area surrounding the mountain is protected as a nature reserve. 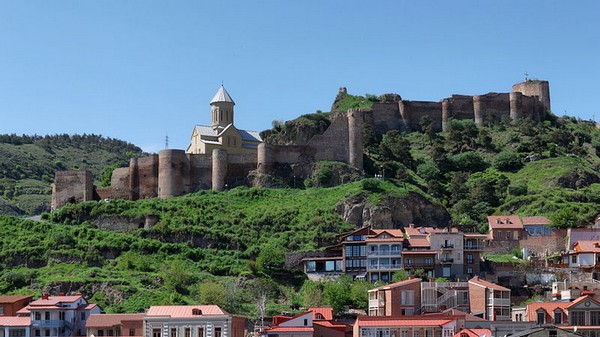 Located near the Kura river, the Narikala Fortress is the landmark of the Georgian capital Tbilisi. It has a long history, with its construction dating back to 4th century. It was built to defend the city from outside attacks. Frequent attacks and natural disasters have contributed to its erosion, yet many parts of the fort stand there with many stories to tell. It also houses the recently restored St. Nicholas church. 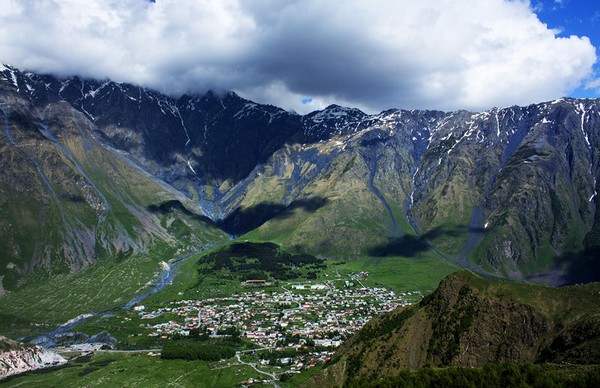 Stepantsminda is a beautiful little town lying in the valley of the Caucasus Mountains. It is named after a Georgian Orthodox monk who built a hermitage there. The most famous landmark of the town is the Gergeti Trinity Church which is highly sought out by tourists. It is located atop a mountain which can only be reached through a beaten track. Surrounded by snowy peaks and greener than its neighborhoods, Stepantsminda sometimes reminds one of a small Swiss town with its geographic beauty. 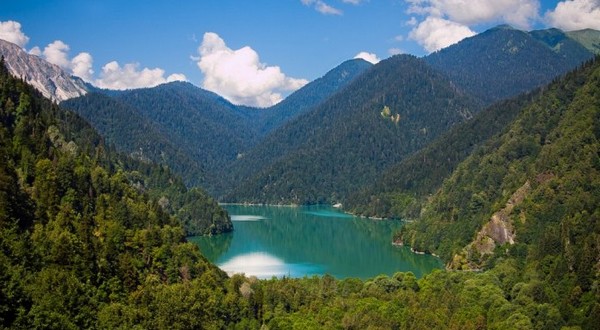 Lake Ritsa is a growing tourist attraction located in Abkhazia. It is the perfect place to go for a picnic. It is surrounded by beautiful mountains, and the azure waters of the lake are a mesmerizing view. The land around the lake is a deciduous forest and is part of the Ritsa Nature Reserve. 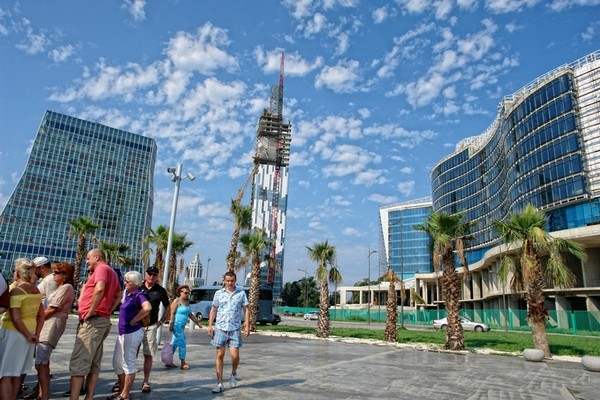 Georgia has numerous seaside towns and Batumi is the best among those. Located on the Black Sea coast under the Caucasus Mountains, it is the second largest city of the country. A mixture of modern and classic architecture could be seen in the city, and fresh buildings emerging owing to the tourism. Now it is the major tourist destination in the region in the summer.