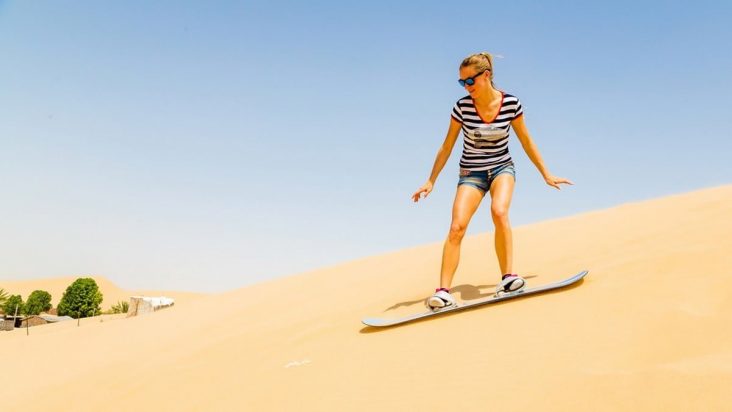 Mankind has an age old relationship with stress and Sports are known to be the greatest stress busters. Unlike cricket, soccer, tennis which got their fair share of popularity the fate of the sport Sandboarding is quite low-profile. Sand-boarding is a sport similar to snowboarding which involves riding down the slope of a sand dune with both legs strapped on a board. This recreational activity is found to thrive mostly in the desert and coastal areas where there is an abundance of sand dunes. Here is a list of top 10 known and unknown destinations where you can Sand-Board.

10 Best Sandboarding Destinations in the world.

So are you a brave-heart? Try testing your courage by running down the slopes of a sand dune on a sand board in Peru. The South American country boasts of having several high sand dunes. The largest sand dune in the world is Duna Grande in Ica, Peru. Apart from Ica sand-boarding is also practiced in Arequipa and Nasca area of South Peru. Most of the sand dunes in Peru are treacherously steep and needs a lot of expertise and guts to sail down the incline of the dunes on a sand-board.

The Asian country displays its sand boarding culture in the Mui Ne dunes. This place of the Earth is much less popular for this sport compared to its other counterparts elsewhere. Sand boarding practices here are not regulated by any authority and locals turn into guides. It will be wise for travelers to surf here in a group as locals asking for tips and getting violent when their demand is not met have been reported by some travel bloggers.

The fascinating island country of Japan is unsung for this sport yet it hosts some incredible sand dunes of the world. Japan is a tiny Asian country that lacks nothing be it rare technology, amazing nature or not-so-popular sports. The Tattori Sand dune is the largest sand dune in Japan and spans along the coast of the Sea Of Japan. Local companies teach sand boarding in the area in the months of April-November. This joyous sport can also be enjoyed in the Chiba and Shimoda dunes of the country.

A well known place to sand-boarders Australia has a wide collection of sand dunes. In South Australia we can find the little Sahara on Kangaroo Island where naturally occurring sand dunes cover roughly two square kilometers. Western Australia flaunts of the Lucky Bay sand dunes where sand-boarding tours are conducted by trained guides on all days except Christmas, New Year and Boxing Day. The Stockton dunes near Sydney and sand dunes in the region of Tasmania also attracts adventure seekers year long.

Do you want to sand-board down the slope of a young active volcano? Visit Nicaragua and your unique wish would be fulfilled! This experience requires the adrenaline junkie to climb up the Cerro Negro active volcano under the guidance of an expert. Ski down the steep slopes of the volcanic mountain on your sand-board after you finish exploring the summit. Several companies operating from the colonial town of Leon provides arrangement for this activity.

The Atacama desert provides ground for several ideal sand-boarding spots in the Latin American country. The entire north of the country is popular for this sport. In Chile is Cerro Iman where annual sand boarding competition is held. The numerous available fast routes down the hill makes this place perfect for hosting the event. The Valle de la Muerte is the place best known in Chile for this sport. Cerro dragon, Medanoso, Punta de Choros are some of the many other places famous among sand-boarders.

The city of Dubai yet again surprises us with its versatility. The desert in Dubai provides a perfect spot for sandboarding and the region also has a sound administration over this sport with several tour operators ready to offer you professional help. In order to enjoy the grandeur of the desert one need to set off early in the morning from the city to the dunes.

The Namib Desert sees quite a lot of sand-boarding activities throughout the year. The world’s highest sand dune Sossusvlei is present here and to board or ski down the dune one needs a special permission. The Swakopmund and Walvis Bay are popular for this sport too. Many Adventure Sport companies deal exclusively with sand boarding and extend out their expertise to the travelers.

Finally the sport got its well deserved honour in the Sandmaster Park in Florence, Oregaon. It is the world’s first sandboard park. The largest expanse of coastal sand dunes in North America is found in this region as they stretch from Florence to Coos Bay. North Carolina, Colorado, California and Arizona can boast of several sand boarding spots. The culture of sand boarding in the States is comparatively much more advanced than that in other countries.

The Europe’s only place where sand-boarding is offered is the man made sand dunes of Hirschau in Germany. During summer time the sport can be enjoyed here. The place also hosts Sand-boarding World’s Champions.

Rumour has it that Pharaoh of the bygone era used to sand board down the steep sand slopes of Egypt on wooden planks. There is no official seal to this story but Egypt is considered the birthplace of this fascinating sport. Glide down the Great Sand Sea near Siwa which is considered one of the best sandboarding destinations.