Nowadays medical treatments and cures are incredibly advanced. We have a remedy for almost every type of illness and few of us opt for dubious medical cures instead of tested medical products and procedures. However, in the past, suspect medical cures were both widespread and popular. Below we have compiled a list of ten most amusing ancient treatments. 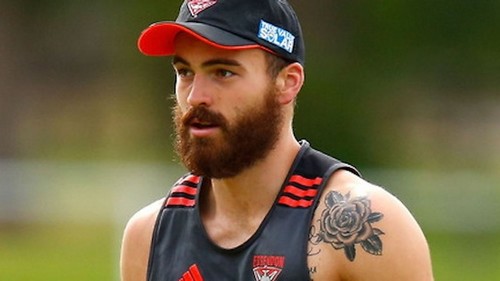 Back in the Victorian day doctors encouraged men to wear beards as a method of protection from illnesses. Since air quality was an issue almost every Victorian obsessed over (for a good reason – due to the prolific burning of soft coal the city of London was often enclosed in a permanent fog for days), a thick beard was believed to act as a sort of filter.

But beards were said to protect in other ways too. For example, some saw it as a way of relaxing the throat. Thus, wearing a beard was said to be especially beneficial for those involved in public speaking. And finally, as mad as it sounds to us today, some doctors believed that men who wore beards would not get a sore throat. 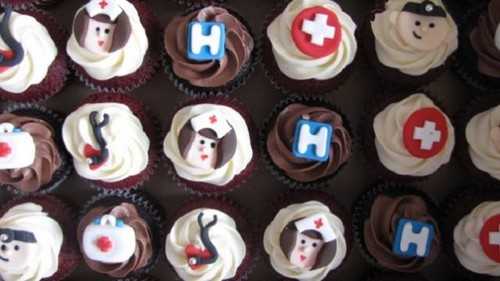 After chocolate was imported to Europe, it quickly gained a reputation as a powerful drug. This idea of chocolate as a drug was boosted by the theory of humorism which stated that the human body comprises of four humors and whenever one of these humors falls out of balance, disease ensues. Diseases could be either hot or cold and wet or dry and had to be treated with oppositely classified cures. Cocoa was a handy cure for it could be prepared both in hot and cold forms.

With time, some doctors came to view chocolate as a treatment for specific illnesses. For example, in a 1631 treatise the Spanish physician Antonio Colmenero de Ledesma claimed that chocolate “takes away the Morpheus, cleaneth the teeth, and sweeteneth the breath, provokes urine, cures the stone, and expels poison, and preserves from all infectious diseases.”

However, some doctors went even further and began associating chocolate with rather unreal qualities. For example, in 1796 some physicians argued that chocolate could delay the growth of white hair and in 1864 it was believed that a chocolate concoction could treat syphilis.

8. Plants That Look Like Organs Actually Cure The Said Organs 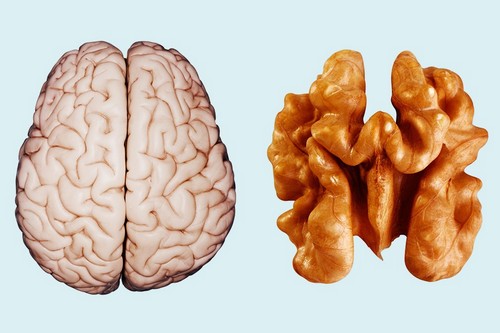 In the past people believed that plants, nuts and vegetables that resembled a human body part or organ could actually treat the resembling limb or organ. Thus the bloodroot, with its red extract, was thought to fix any problems relating to blood and the saxifrage which breaks apart rocks as it grows, was believed to relieve kidney stones.

The curious idea, known as the “doctrine of signatures”, was first mentioned in the West by the Roman naturalist Pliny the Elder. The theory’s popularity reached its peak in the 16th and 17th centuries when it was believed that God dropped hints as to which plants were good for the human body by creating plants that showed a certain “signature” by resembling the thing they treat.

Of course, nowadays we know that the “doctrine of signatures” is both wildly wrong and wildly dangerous. Even in the 16th century, some physicians called it “absolutely unworthy of acceptance”.

However, the idea of “doctrine of signatures” is not a completely mad one. Eyebright, for example, can be put into eye drops to treat eye infections and the common purslane’s stalks, which resemble worms, can actually control intestinal parasite loads. Thus, it is quite possible that in ancient times the “doctrine of signatures” has been used not to identify cures but to remember them. 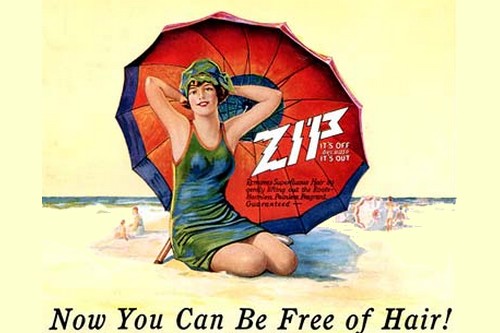 X-rays were first used in dermatology in 1896 when Leopold Freund, the Viennese founder of radiotherapy, used it to treat a hairy growth which covered his patient’s back. After 12 days and 20 hours of X-rays, the hair on the patient’s back started falling out.

X-rays were soon seen as an excellent treatment for eczema, acne and unwanted hair. However, X-rays also caused skin burns, dermatitis and cancerous growths. But while some professionals condemned these treatments, others believed that the problems were the result of bad practises that occurred when X-rays were poorly understood. It was generally believed that the use of screens, shorter exposures and improved techniques would decrease harmful consequences of X-rays.

Since the average interval between X-ray exposure and the diagnosis of skin cancer is 21 years, long-term effects of X-ray treatments became visible much too late. Closing down all the establishments that provided these treatments proved to be an impossibly hard task but with the help of media the businesses were eventually shut down for good.

“Ambition Pills” emerged in America in the 1800s. They targeted “weak and nervous men” and promised to cure impotency, sleeplessness, enlarged veins and nervous debility, including troublesome dreams, despondency, evil forebodings and aversion to society, caused by overwork or other excesses. The pills were especially recommended in cases were said “illnesses” were long standing or incurable by other remedies.

That sounds all well and good. Except that in 1918, the Journal of the American Medical Association published preliminary findings on what these “ambition pills” contained. It was found that each pill contained pepper, cinnamon and ginger, as well as what seemed like aloes in small amounts. However, each pill also contained around one-fifth of a grain of iron in the form of sesquioxid and a little over one-thirtieth of a grain of strychnine.

“Ambition Pills” were sold at fifty cents a box with each box containing forty-two pills. Thus, it was possible for anyone to purchase enough strychnine in a single box to kill an adult. As one can imagine, the fact that the pills contained strychnine, the colourless and odourless toxic pesticide meant that “ambition pills” were soon banned by the AMA before any serious damage could be done.

“Valentine’s Meat Juice” was brought into production in 1871 and soon gained popularity with orthodox physicians and professional publications such as British Medical Journal. It could supposedly “conserve the weakened vital forces without irritating the digestive organs” in cases of diarrhoea, dysentery, and cholera infantum.

The curious product was invented by Mann. S. Valentine after one of his family members (purportedly his wife) came into great danger from “a severe and protracted derangement of the organs of digestion.” She could not eat any normal food but none of the available substitutes could satisfy her either.

Through experimentation Valentine managed to turn all the goodness of raw meat into a highly condensed form. Instead of being boiled or roasted, Valentine’s product was the result of mechanical compression and low heat and thus supposedly retained all the protein of raw flesh.

Half a teaspoon to two teaspoons of Valentine’s Meat Juice diluted by water and taken by mouth was commonly prescribed by physicians. However, some doctors advised taking the product per rectum. For example, one enema described in The Philadelphia Medical Journal was made up of an egg, one tablespoon of Valentine’s Meat Juice, sterilised milk, brandy, salt, and sterilised water. Two ounces of this mixture was to be placed “as high up in the large bowel as possible” every two hours.
In 1909, the American Medical Association found that the product did not in actual fact contain any more protein than the average meat extract made with the use of heat.

4. Cure Rheumatism By Sitting In A Rotting Whale 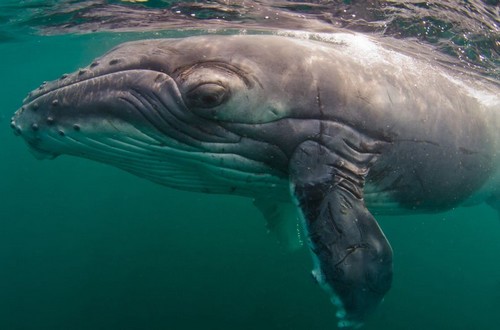 Believe it or not, but back in the day people suffering from rheumatism were seriously advised to sit inside the stomach of a dead whale for about 30 hours in order to relieve their symptoms. If they managed to do so, they were promised to be relieved from pain for at least 12 months as a result of the healing properties of the gases and fumes generated by the rotting carcass of the whale.

The bizarre procedure would begin when a hole was put through one side of the whale’s body, large enough to fit a patient. The patient would then climb inside the whale, leaving only his head outside the aperture. The aperture was then closed up as closely as possible to ensure that the patient did not have to breathe in the overpowering ammoniacal gases that would have otherwise escaped from every opening left uncovered.

The Pall Mall Gazette in 1896 ran a story suggesting that the whale cure was born after a drunk fell into a whale carcass and emerged two hours later completely sober and cured of his rheumatism – “The whale had already been cut open, and appeared to our hilarious friend a tempting morsel of flesh. He made for it and plunged right into the huge mountain of decomposing blubber […] He found himself so comfortable that he did not emerge for over two hours.”

3. Wipe Your Face With A Cloth While Watching A Falling Star To Get Rid Of Acne 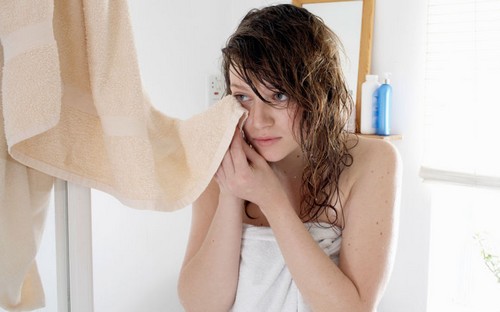 Acne has been around forever and hypothesis explaining its appearance and treatment has varied with time. For example, the Greek poet Theocritus was convinced that telling lies invariably resulted in the appearance of pimples on the nose.

The ancient Egyptians treated acne like most other diseases of the time, namely with magic and sulphur. In 4th century AD, Roman physicians prescribed a curious treatment for those suffering from acne: patients had to wipe their face with a cloth while watching a falling star. If all was done correctly, the pimples would simply fall off the face and body. This treatment later resurfaced during the Middle Ages. 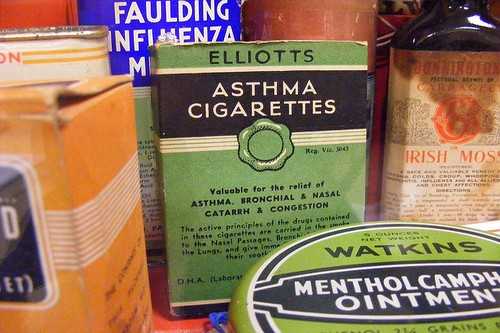 In the late 19th century asthma cigarettes were extremely popular both in America and Europe. The cigarettes were supposed to cure any respiratory condition, including asthma, chronic bronchitis, whooping cough, cholera, croup, catarrh, and hay fever.

The cigarettes contained no tobacco but crushed and dried herbs such as Indian Hemp, Cannabis, Atropine and Belladonna. Inhaling the latter herb provided a hallucinogenic effect which helped those suffering from asthma to take their minds of their illness.

However, smoking asthma cigarettes that contained Belladonna could also result in side effects such as a dry mouth, increased heart rate, dilated pupils, nausea and headache. The herb could also cause death if inhaled in high enough quantities.

1. Cure A Hangover With A Special Wreath Worn Around The Neck 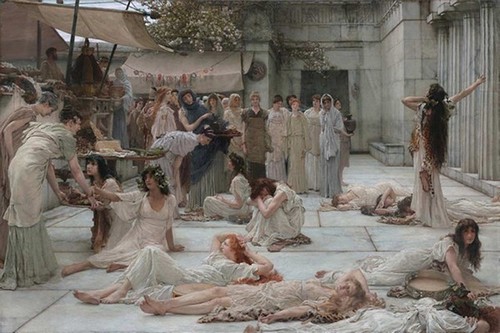 A curious Ancient Egyptian “drunken headache” cure has been published in recent transcription from the Oxyrhynchus papyrus records. The cure advises the sufferer to string together the leaves of a shrub called Alexandrian chamaedaphne, which supposedly eases headaches, and wear the wreath around his or her neck.

Flower wreaths, such as ones made from roses or myrtle, were also said to be effective for they would cool down your bad humours and relieve headaches. But wreaths made from flowers such as lilies were to be avoided due to their heavy scent.

It is interesting to note that Greek and Roman physicians wrote entire treatises on the topic of curative wreaths. Unfortunately, all these treatises , except for a few extracts, are now completely lost.