Animals are living beings with probably the same emotions as humans. Many times scientists have proved that animals express love, friendship and loyalty in quite the same way as humans. They feel pain, they get lonely, they feel the loss of a loved one and the mothers are willing to lay off their lives for the kids- unless it is a Tyrannosaurus Rex.

Animals will be animals and no matter how sophisticated their expressions get, they will never attain the same status as those of humans in this world. That is how nature set the course. Still, some animal expressions are so vivid that you can’t help acknowledge them. Asian poets have written poems on how sad a female deer can get, comparing its eyes with those of a pretty damsel in distress and so on… We have collected ten heart touching animal stories for you so that you can attempt to gauge the emotions behind an animal’s eyes. 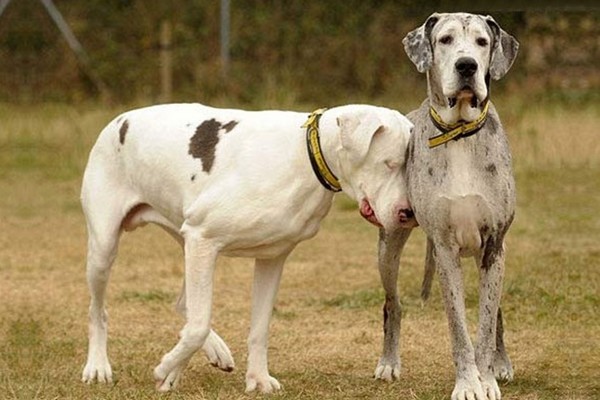 The Great Dane Lily and Maddison have proved how important friendship is to survive in the world. When a 6 year old Great Dane Lily lost her eyes, she went into depression until Maddison came along. Not only did Madison become the eyes of Lily, she rubbed against her body to show affection and together they did everything that two normal dogs would do. They run and play together and spend time with each other to the extent that not one goes anywhere without the other. Lily is now happy and out of depression. Here is a glass that is always half full! 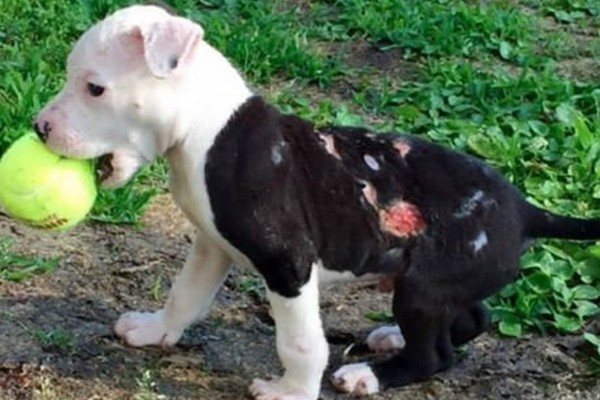 Internet News’ good news section shows us stories like people helping, rescuing and loving each other. Jake the Firedog was introduced to us through the news too. It was a small dog, estimated to be only a few weeks old and was rescued by a firefighter from a burning shed. The dog was abandoned by his family at a vet’s clinic later. He was then adopted by the firefighter that had rescued him. The dog recovered quickly and took his place on the tower truck.

He is now the official mascot of the fire department and visits schools and education centers for awareness campaigns. He was even sworn in by the city council of Hanahan and was given his own badge. Jake’s future plans are to become a therapy dog for children who suffer with burns in order to let them know that scars do not change who they are on the inside. 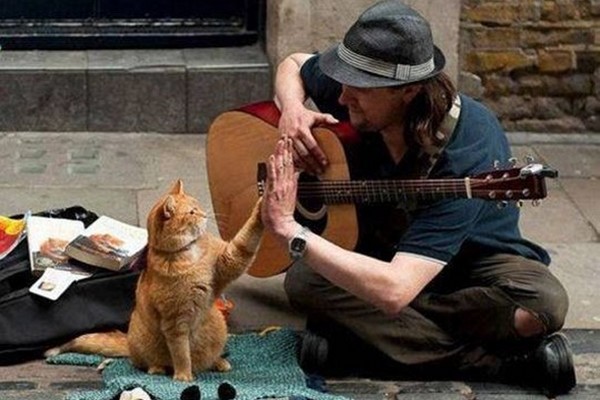 A homeless musician James Bowen came across a cat in the subway that was suffering from a wound in the leg. It possibly came from a cat fight but the stray cat needed help. James took him to the vet and helped it recover. From them onwards, the two became inseparable. Bob the cat followed James everywhere and revenues dramatically increased for James. Eventually he wrote a book about how Bob changed his life and about their adventures on the street together. If you want to feel how Bob really changed his life- buy the book “The Street Cat named Bob”! 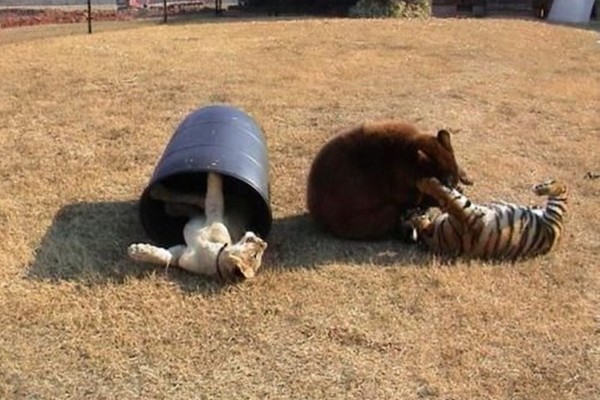 It is impossible for a tiger, a lion and a bear to stay in the same cage but this trio showed us that coexistence is possible. These three animals coming straight out of the Rudyard Kipling bestseller “The Jungle Book” were locked in a basement and abused until they were rescued. Originally owned by a drug dealer, they were undernourished and not taken care of properly. In 2001, they were taken to Georgia for recovering from their injuries by the Noah’s Ark Animal Sanctuary which is an NFP society for animals. The abuse that these three went through developed a bond between them that looked beyond their species. They refused to go by the innate feelings for each other so the animal sanctuary also respected that and kept them together. 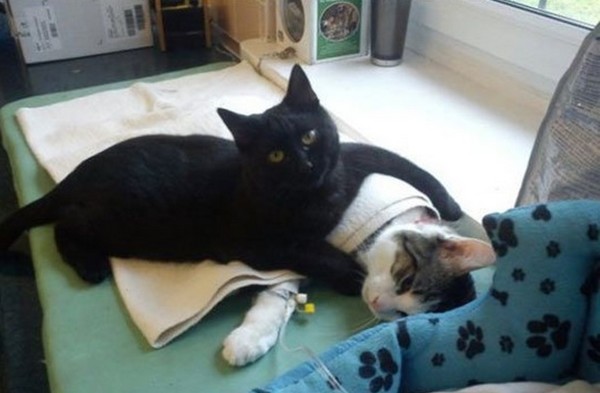 The healing cat or Rademenesa is a nurse! His activities can surprise you because there is a long history of love and care attached to them. Diagnosed with inflamed resporatory tract at the age of 2 months, Rademenesa lived in an animal sanctuary where he overcame the ordeal with treatment and care. He now lives in an animal shelter where he cares for other sick animals and tries to nurse them back to health. It is quite surprising but you can actually see the cat sitting by an ailing cat or a dog; trying to let it know that there is someone who cares!

See also; 10 Interesting Things About Cats You Need to Know.

5. The hippo and tortoise bond 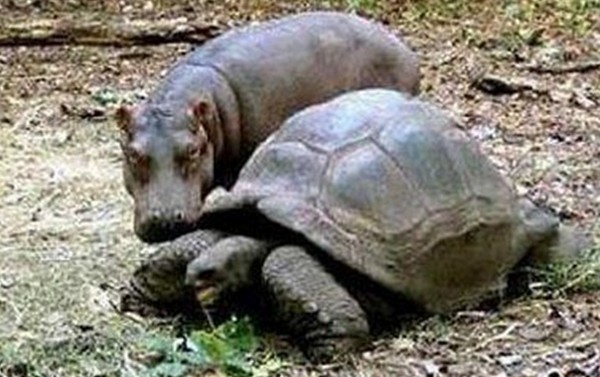 A baby hippo got swept away by a tsunami and lost everything. Where it reached lived another tortoise 130 years old. Now they both bond together in a way that is unexplainable. It is true that natural calamities do not distinguish between young or old, baby or adult and just strike. The same happened to this hippo but who knew he would find love where it is least expected? You can see their pictures where both are swimming together, cuddling against each other and taking a stroll. It makes us believe that coexistence is possible, although exceptionally, but it is.

4. The dog that never left 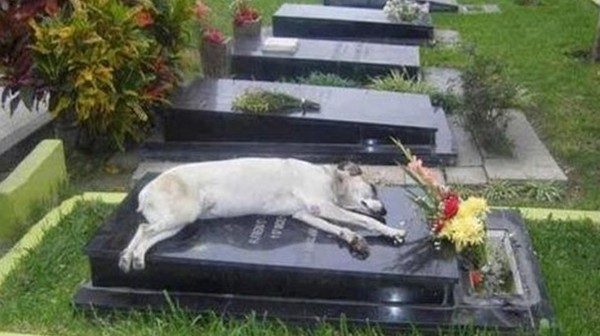 This one is a popular one and it is not the first time that something like this has happened. Dogs are generally very loyal and affectionate towards their owners but happenings like this endorse our trust in this animal even more. They say that a dog is the man’s best friend and they may be right because Captain, the dog, has not left his owner’s grave for six years. Everyday at precisely 6 p.m he enters the cemetery and stays by his owner’s grave ever since the owner died. The family discovered this on the second day of the owner Miguel Guzman’s funeral when they visited the cemetery and found the dog by the man’s grave. He had been missing since the funeral. We do not know whether the dog is still alive but on the record are visits for 6 years. 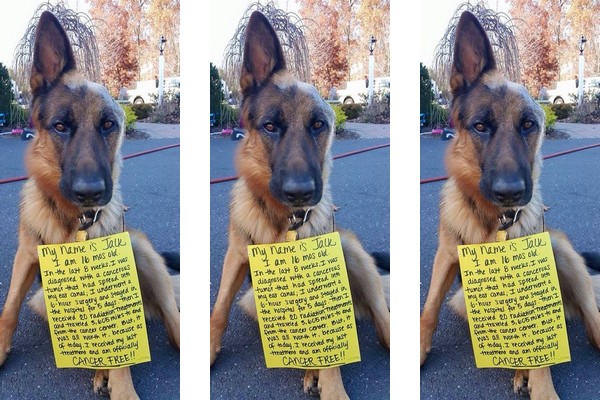 A German shepherd Jack is an inspiration for all cancer patients. He was diagnosed with cancer when he was 14 months old. He underwent a surgery for six hours in order to remove the tumour that had metastasized all over the ear. The cancer had spread to ear canal and thus the left ear of the dog had to be amputated. The dog amazingly travelled over 5000 miles for getting his cancer treatments including radiation therapy. Eight weeks after diagnosis he was officially cancer free and continues to inspire others to fight for their cause. We write this as if the dog said all this himself- but if he could talk, wouldn’t he? 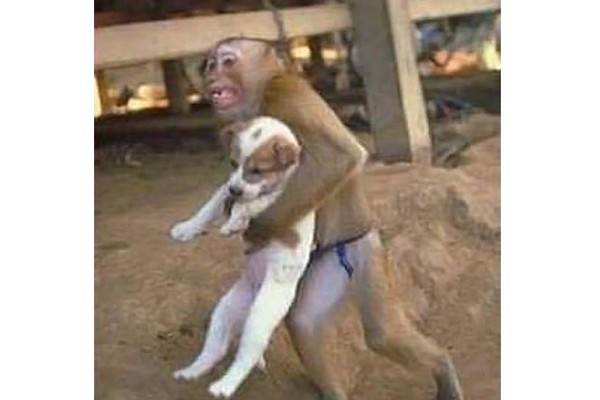 During a deadly explosion in a Chinese factory, a monkey was caught on tape carrying a puppy to safety. Such actions are nothing but proof of compassion, sacrifice, help and love. It gives us a lesson about helping out each other and trying to save each other. Animals teach human beings certain things that we continuously choose to ignore.

1. Yang Yun and the Beluga Whale 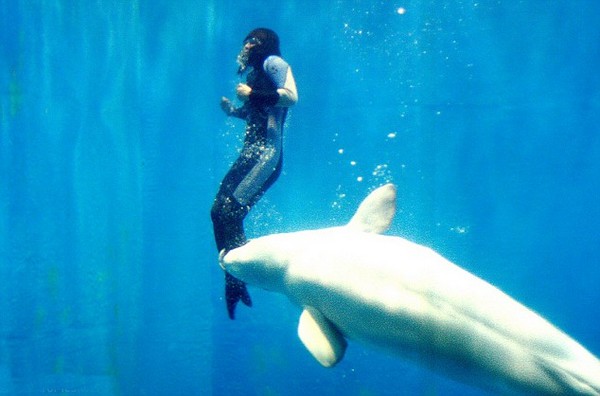 Yang Yun was free diving in the Arctic when her legs cramped while she was at the bottom of the pool. She couldn’t move and kept sinking lower. As she choked, she felt something heavy beneath her legs. A Beluga whale had sensed what was happening and lifted the diver to the surface thus saving her! Not only are animals an important part of the ecosystem of the world, they display emotions and feelings nearly at par with humans.

Even as you read this now, North Korea is defying sanctions, the U.S is mobilizing its navy, China is keeping a close eye on the situation and meanwhile India chooses to target innocent people through Afghanistan on the Durand Line. Then there is also Syria and the rest of the Middle East. The world is literally in a mess but we choose to ignore symbolic rescues, compassion and coexistence of the fiercest predator and prey for the sake of our selfish benefit.