Art knows no boundaries. Time after time, artists have shown how a single form of art can be performed in a variety of ways. All it takes is a creative mind, a distinct imagination and the endurance to follow one’s passion.

In this section we will see how modern day artists gave a twist to the ancient art of sculpting when they decided not to use stone, clay, metal or anything that has been traditionally used. What they did instead led to the formation of these unique but huge sculptures.

Whether constructed as a part of company’s promotional activities or out of an artist’s passion to create something extra-ordinary, the uniqueness of these huge sculptures have left a long lasting impression. Moreover, they also have a mention in the Guinness World Records for being the largest of their kind.

Largest Rabbit Made From Chocolate 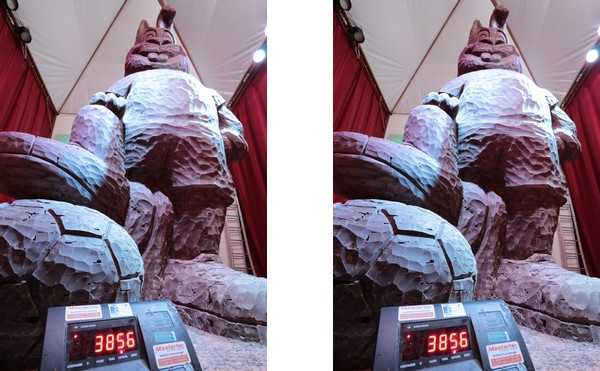 Choco-lovers were in for a big surprise to find out a huge Rabbit sculpture made entirely out of chocolate that was exhibited at shopping Uberaba in Brazil. It was created by Equipe da Casa do Chocolate. A team of 9 professionals had worked for 8 consecutive days to achieve the success on February 25, 2017. The chocolate rabbit measured 4.52 m high, 1.76 m long and 2.11 wide. It weighed 4,245.5 kilograms. (source guinnessworldrecords)

Huge Horse Made From Horseshoes

Artist Donnie Faulk sculpted a life-size horse out of horseshoes. A total number of 1,071 horseshoes were used. The final measurement was taken on September 4, 2016 in Pulaski, Tennessee, US.

Largest Armchair Made From Cotton Tips 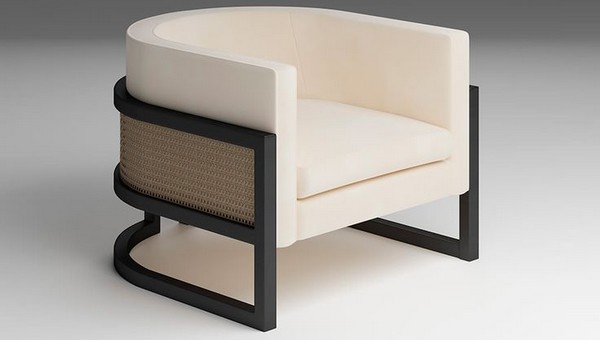 Who could have ever thought of using cotton tips for the purpose of sculpting? It was Monica Veidt of Schonebeck, Germany who introduced her huge sculpted Armchair on April 18, 2002. It was accompanied by a matching lamp and a coffee table, also made from cotton tips. The chair alone was made out of 61,422 cotton tips.

Largest Alligator Made From Toothpicks

Michael Smith, an artist of USA, created a big sculpture of an alligator using toothpicks. The alligator was named Alley. More than 3 million toothpicks were used in the construction. Alley had a length of 15 feet and weighed 132.4 kilograms. It was measured on March 22, 2005.

Largest Teddy Bear Made From Balloons 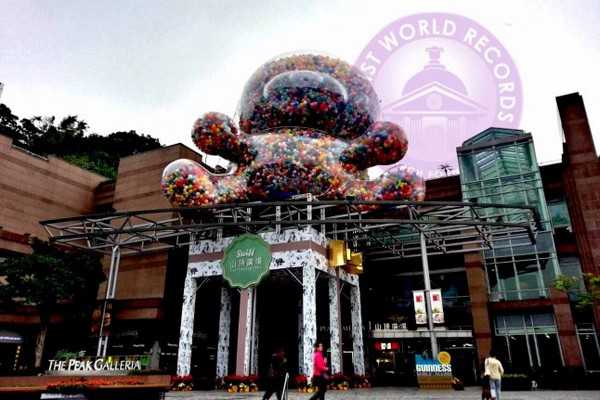 A favourite toy (teddy, extra-large!) made out of another favourite toy (balloons, thousands of them!) must have been a sure treat to watch, especially for kids. Jeff Wong Kwok Cheong and a team balloon artists made the 3D Toy Bear sculpture using as many as 1,04,668 balloons. It was displayed at Peak Galleria in Hong Kong on November 28, 2014.

On June 22, 2014, thousands of people gathered to witness the Floating Bridge positioned in Lake Maggiore in the waters opposite Baveno town in Italy. The unique feature about the bridge was that it was made completely out of plastic bottles. It was constructed by Comune di Baveno, Italy. The bridge consisted of 43,296 plastic bottles and was 496.39 feet long, 6.88 feet wide and 1.14 feet high. It was dismantled after the event and all plastic bottles used were regularly recycled.

Tallest Pole Dance Made From Paperclips 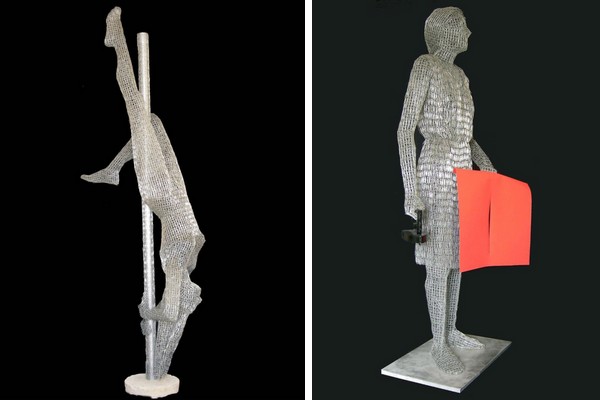 Italian artist, Pietro D’Angelo, has been creating a series of paperclip sculptures since 2008. The ‘Pole Dance’, made in 2008, is the tallest in the series. It measures 7’5” x 2’3” x 2’11”. Pietro uses special stainless steel paperclips that are made exclusively for his sculptures by a paperclip factory. He uses ten to twenty thousand paperclips for each of his sculptures. Also, he starts his sculpting work by shaping a net of stainless steel. He then hooks the paperclips onto it, thus hiding the net. Every construction is completed within two to three months. He performs the work by hand in his house.

Largest Gorilla Made From Coat Hangers 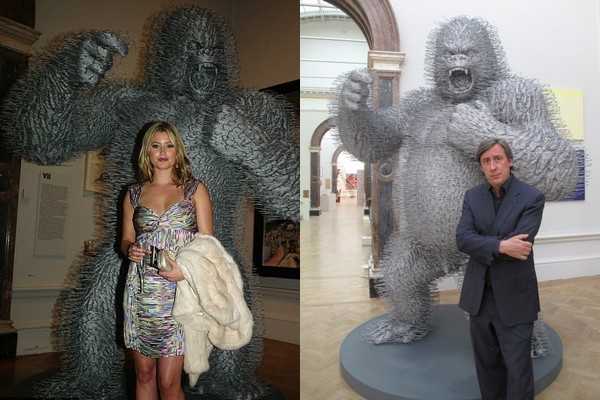 A popular artist of UK, David Mach sculpted a male gorilla out of 7,500 metal coat hangers. It measured 7 feet tall, 9 feet long and 5 feet wide. It took 2,705.6 man hours for him to complete the structure. The gorilla, named ‘Silver Back’ was first displayed at an Art Fair in Paris in October 2007. The artist has made many other sculptures using coat hangers which are displayed on davidmach.com.

Largest Globe Made From Bottle Caps 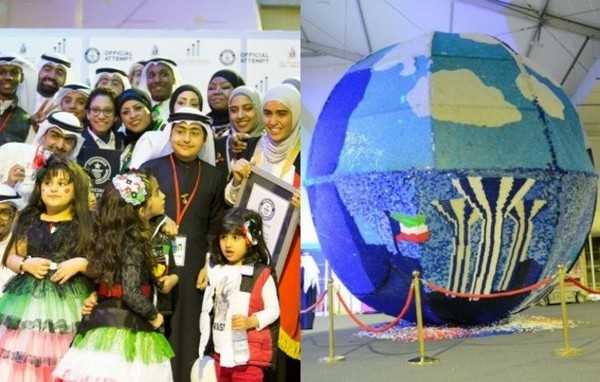 Fatma Yousef Al Fadli, the Ministry of Youth Affairs and a team of volunteers created a sculpture in the shape of a Globe in Kuwait. The Globe had a diameter of 5.6 meters and was comprised of 1,47,008 bottle caps. Fatma, her family and her friends were collecting bottle caps for over 2 years. The sculpture was designed by Fatma Al Tamimi. Famous Kuwaiti landmarks including the Al Hamra Tower, the Liberation Tower, the Kuwaiti Water Towers, the Fatima Mosque and the Kuwaiti Flag were depicted on it. The Guinness World Record attempt was achieved on February 25, the National Day of Kuwait, in 2015. It formed a part of the country’s celebrations.

Huge Palm Tree Made From Dates 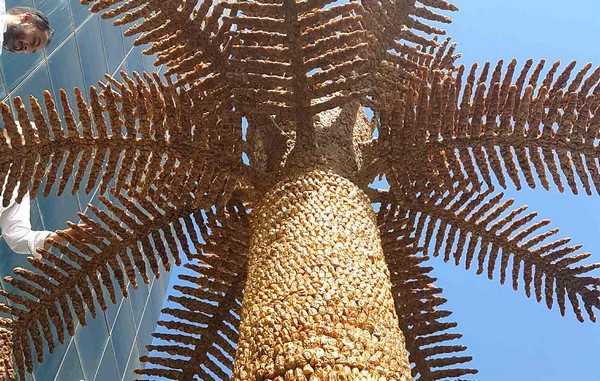 In November 2016, Saadeddin Co., a famous pastry and sweets manufacturer, presented a huge Palm Tree made entirely out of dates. The 19 feet 6 inch tall tree was created using a whopping 1,800 kilograms of dates. The tree was painted with edible gold which added more beauty and sparkle to the stunning sculpture. It was unveiled at the Saudi Marketing Conference in Jeddah, Saudi Arabia, where it was declared the ‘World’s Largest Fruit Sculpture’. After the success was announced, the dates were distributed to charitable organizations. The thought behind the making of this sculpture was to reflect the palm tree that is featured in the Saudi Vision 2030 Initiative Logo.

10 Huge Sculptures Made From Unusual Base Material

Apurva Dhage is an online article writer. Feel free to contact her on apurvadhagewrites@gmail.com.