Every part of the world has its own culture, folklore and mythology. In every mythology, there are the unique creatures who are only half human, as they hybridize with some animal to form a mystic creature, or because they can change their form. There are some outstanding mythological creatures, formed by animals and human beings sharing bodies. Let’s see which animals human beings have shared their body with, in mythology: 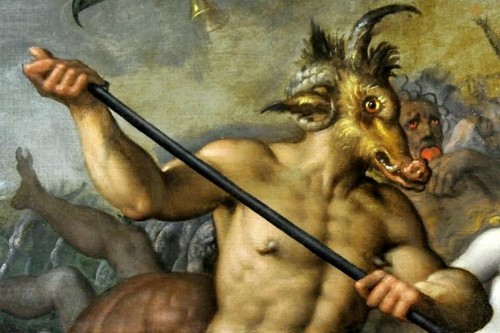 Some of the mythological creatures with the upper body of a human, and the rest of the body of a goat are Faun, Pan, Satyr, Silenus and Devil. Faun is a rustic Roman god/goddess of the forest, and is associated with Pan, the Greek god of flocks and shepherds, as well as his companions, the Satyrs. Silenus is the rustic god of the dance of the wine-press, who is older than the Satyrs. Primarily from the Greek mythology, Devil, the enemy of God and the personification of evil, and exists in many religions and cultures. All these creatures have a human torso, while waist downwards, they are goats. On the other hand, according to Hindu culture, Daksha, the noble king and son of Lord Brahma, got his replaced by a goat’s head after he was beheaded.

There are several mythological creatures that are half humans and half birds. Harpies are female monsters in the Greek and Roman mythologies, depicted as birds with the faces of women. Lilith is female demon, existing in the Jewish mythology, are women with wings are bird legs. Sirens, the Greek femme fatales, are described variously, as different combinations of birds and women, with the later descriptions emphasizing more on their humanization. The Russian counterpart of a Siren is the Sirin, with Alkonost as its counterpart. All three have unique singing abilities that can make the listener forget everything else. In Russian folklore, Gamayun appears as a prophetic bird with a woman’s head, and is very wise and knowledgeable. In the Southeast Asian mythology, Kinnaras, the celestial musicians and eternal lovers are creatures with a human upper-body and the body of a bird from waist downwards. Karura is a Japanese Hindu-Buddhist mythological creature with a human body and bird’s head, based on the Hindu mythological creature, Garuda, which is a gigantic eagle with a human body. Egyptian gods with bird’s heads are Montu, Horus, Seker and Ra. 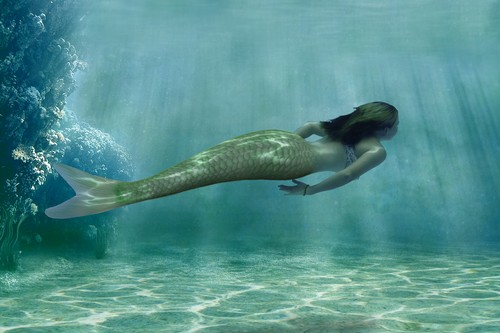 Some mythological creatures are hybrids of human beings and fish. The most classic example is the mermaid/merman who appear in cultures worldwide, including Near Eastern, Asian and African cultures. The first appearance of this creature goes back to Assyrian mythology that depicts goddess Atargatis (Derceto) converting herself to a mermaid. Triton, the Greek god who is the messenger of the sea, is represented as a merman. They have a human upper body and a scaly fish tail. Other mythological creatures of similar structure are Siyokoy, Sirena and Dyesebel in Philippine mythology and Jengu (plural: Miengu) in the Sawa traditions of Cameroon. Dagon, a half human and half fish, is the Mesopotamian god of fertility, and appears in the Bible, as well. Matsya is an avatar of Hindu god, Vishnu, depicted with a human torso and a fish rear. Avatea, according to Cook Islands mythology, is a lunar deity and the father of gods and men, and has the right half of a human, and the left half of a fish. Ichthyocentaurs, in Greek mythology, are a couple of sea-gods with the torso of a human, lower front of a horse and the tail of a fish. 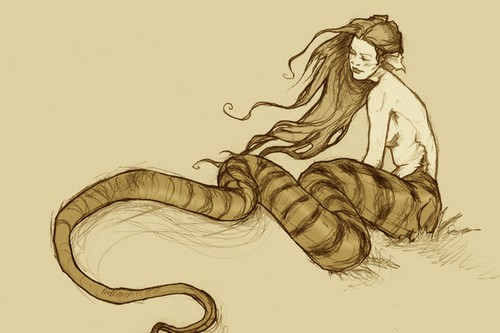 Snake, generally viewed as a vicious creature, has been seen to share body with humans to form many a mythological creature. In Hindu mythology, for instance, Ketu is the descending lunar node, and is depicted as an Asura with the tail of a great snake. Echidna, the Mother of All Monsters in Greek mythology, is a half nymph with a beautiful human face and is half snake. Lamia, the mistress of the Greek god, Zeus, is described to have a serpent’s tail below the waist according to some accounts. In Chinese mythology, Nuwa and Fu Xi are siblings, where Nuwa is the female counterpart and Fu Xi is the male, and they have human-like bodies with serpentine tails, and Zhulong is a giant red solar deity with a human face and a snake body. Kauket, who is the female form of Kuk in Egyptian mythology, is a snake-headed woman. The Greek mythological creatures, Gorgons, are three sisters, Stheno, Euryale and Medusa, who are snake-haired humanoid monsters. Hatuibwari is a Melanesian dragon with a human head, a serpentine body and the wings of a bat. The cobra-headed Meretseger from Egypt is another example. 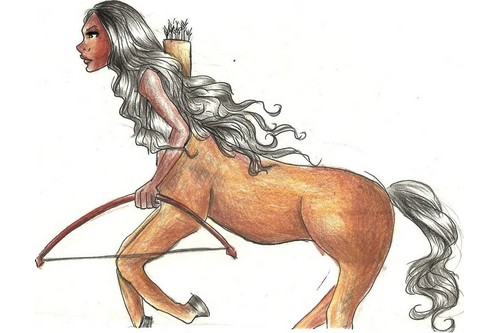 There are many humanoids in the mythologies from around the world which are half humans and half horses. Centaurs are Greek mythological creatures with the body and legs of a horse and the head, torso and arms of a human. The female counterpart is a Centauride, which, in Philippine mythology, is presented as an Anggitay. Another version of the Greek Centaurs are the Ipotanes that also had the ears of a horse. The Greek Ichthyocentaurs have the upper body of a man, the tail of a fish and the lower front of a horse. The Islamic creature, Al-Buraq, the Hindu creature, Hayagriva, the Horse-Face of Chinese mythology and the Tikbalang of Philippine folklore are all humanoids with the heads of horses. Kinnara is half-human and half-horse, according to the Buddhist and Hindu mythologies in India. 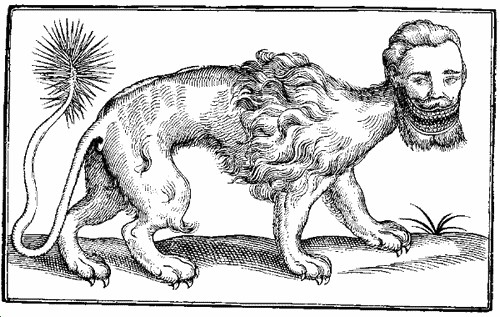 Lion, the king of the jungle, has joined body with humans to form many astounding mythological creatures. Sphinx is a mythological creature of Greek, Egyptian and Asian origin, with the head of a human and the body of a lion, occasionally depicted with wings. Manticore is the Persian version of Sphinx. A Lamassu is an Assyrian protective deity with the body of a lion, wings of an eagle and head of a human. Mahes, the Egyptian god of war, and Sekhmet, the Egyptian warrior goddess, are both animals with a human body and lion’s head. Narasimha, an avatar of the Hindu god, Vishnu, is visualized with a human torso and lower body, and the face and claws of a lion. 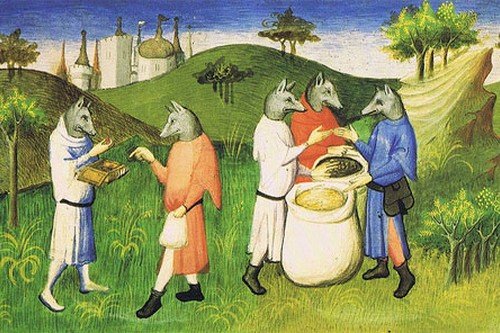 In many mythologies from around the world, dogs and humans have formed humanoid mythological creatures. Some examples are the Chinese tree spirit called Penghou with a human head and a dog’s body, the dog-headed Cynocephaly, the Japanese Tengu, and the Inuit Adlet with a man’s upper body and lower part of a dog. 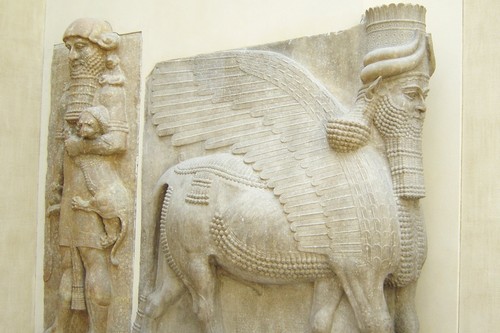 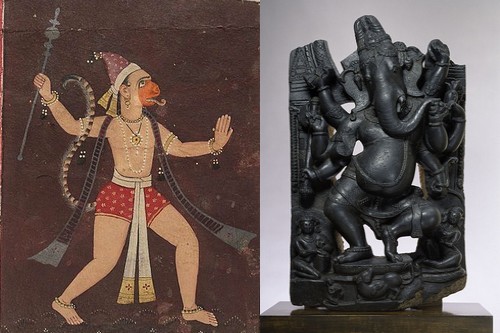 There are several other animals that humans have shared bodies with, in myths and mythologies, such as the elephant-headed Hindu god named Ganesha, the humanoid monkey deity named Hanuman in Hinduism, fairies which are humans with wings, and hundreds of others. 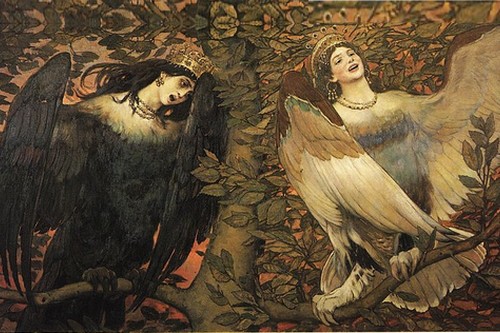 Another unique category of mythological humanoids is that of the shape-shifters. There are several examples. Encantado is a Brazilian folk creature often described as shape-shifting snakes, but, mostly refers to dolphins that have the ability to transform to humans. On the other hand, the werewolves appear in European folklore as humans who can turn to wolves. There are also some other versions of werewolves, such as werehyena, werecat, etc.

The world of myths, mythology, religion and folklores is exceptionally astounding, and these creatures make it all the more breath-taking. There are also several other mythic creatures that are non-humanoid, and are hybrids of different animals, like the Pegasus, Griffith, Hippogriff, etc.