Uncontacted people or isolated tribes are communities who live, or have lived, either by choice or by circumstance, without significant contact with globalized civilization. There are few people have remained totally uncontacted by global civilization. They still living in some of the most isolated regions of the world. Most uncontacted communities are located in densely forested areas in South America and New Guinea. Knowledge of the existence of these groups comes mostly from infrequent and sometimes violent encounters with neighboring tribes, and from aerial footage. Isolated tribes may lack immunity to common diseases, which can kill a large percentage of their people after contact. Here is a list of 10 isolated tribes that avoided modern civilization. You may also like to read about “10 Tribes Who Are About To Go Extinct“. 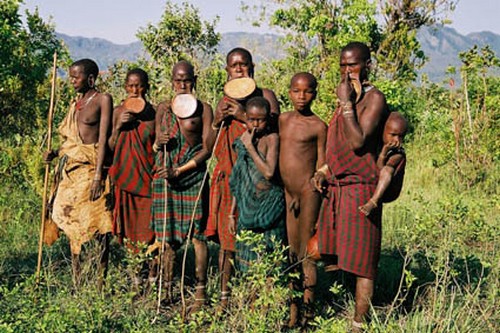 Surma is a panethnicity residing in South Sudan and southwestern Ethiopia. It includes the Nilo-Saharan-speaking Suri, Mursi and Me’en. According to Suri oral tradition, they came to their present territory near Mount Naita about 200 years ago from the banks of the Nile River. First they came to the Akobo (eastwards from the Nile). Then some went south to settle at Boma while the remaining Suri traveled across the border and settled at Koma.

The Suri is not the only tribe in the south of Ethiopia. There are around twelve more, and all are surrounded by tension. Each tribe has its own share of weapons, making battles more violent. Though they were well-known by Westerners for their giant lip plugs, they wanted nothing to do with any sort of government. The Surma lived in groups of a few hundred, and carried on with their humble cattle ranching for centuries while colonization, World Wars, and struggles for independence were going on all around them. 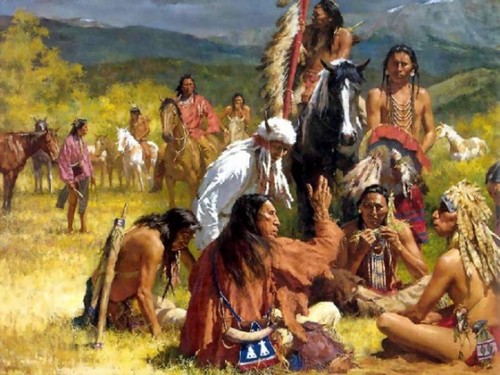 During the 1700s, European settlers captivated up their colonization of North America’s East Coast. By this point, every tribe amid the Atlantic Ocean and the Mississippi River had been added to the archive of accepted peoples. Every tribe except for one, that is “Jackson Whites”. They are a group of approximately 5,000 people living around the Ramapo Mountains of Bergen and Passaic counties in northern New Jersey and Rockland County in southern New York. The group, which has been alleged to be comprised of a mongrel hybrid of renegade Indians, escaped slaves, Hessian mercenary deserters, and West Indian prostitutes, have come to be known as the Jackson Whites.

The group rejects this name and its associated legends as pejorative. On July 30, 1880, The Bergen Democrat was the first newspaper to print the term Jackson Whites. A 1911 article noted it was used as a title of contempt. Instead, they called themselves “The Mountain People.” 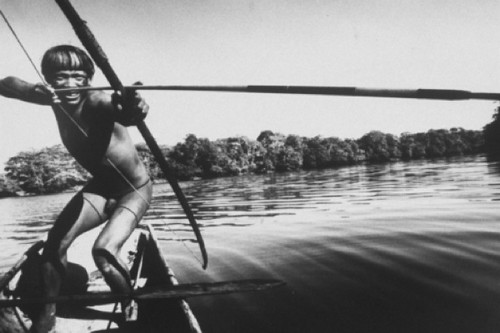 Slate has called him “the most isolated man on the planet”. Somewhere in the Amazon, there’s a tribe consisting entirely of one man. Like the mysterious Bigfoot, the man always disappears just when it seems that scientists are on the verge of finding him.

Why is he in such high demand, and why can’t he be left in peace? Well, it turns out that he is supposed to be the sole remaining member of his uncontacted Amazonian tribe. He’s the only person in the world who retains the customs and language of his people; making contact with him could be like finding a treasure trove of information, not least of which would be the knowledge of how he survived for decades entirely by himself. (Listverse.com). 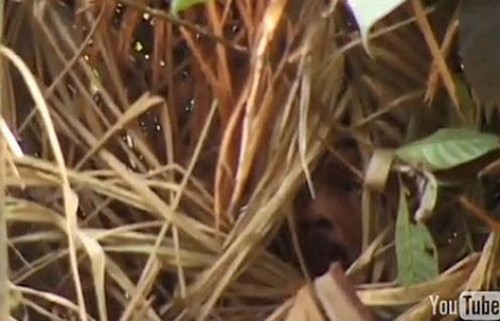 There is a man currently living in isolation in the Brazilian rainforest. He has been there for at least 15 years. He builds his own palm huts and digs five-foot-deep rectangular holes in the middle of each. We don’t know what he uses them for, because these huts are abandoned as soon as anybody gets anywhere near them. No other people in the area build huts like this, which has led researchers to believe that this man is the last surviving member of his tribe. No one knows what language he speaks or the name of his ex-tribe.

6. Ishi – The Last of the Native Americans 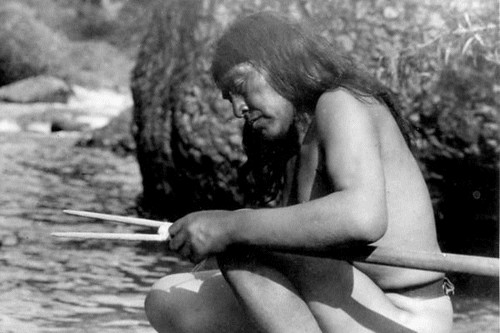 Ishi was the last member of the Yahi, the last surviving group of the Yana people of the U.S. state of California. Widely acclaimed in his time as the “last wild Indian” in America, Ishi lived most of his life completely outside European American culture. At about 49 years of age, in 1911, he emerged from “the wild” near Oroville, California, leaving his ancestral homeland, present-day Tehama County, near the foothills of Lassen Peak, known to Ishi as Wa ganu p’a.

Ishi means “man” in the Yana language. The anthropologist Alfred Kroeber gave this name to the man because it was rude to ask someone’s name in the Yahi culture. When asked his name, he said: “I have none, because there were no people to name me,” meaning that no Yahi had ever spoken his name. He was taken by a researcher to Berkeley University, where he told the academic staff the secrets of his native life, and showed them many techniques for living off the land that had been long forgotten, or at least unknown to researchers. 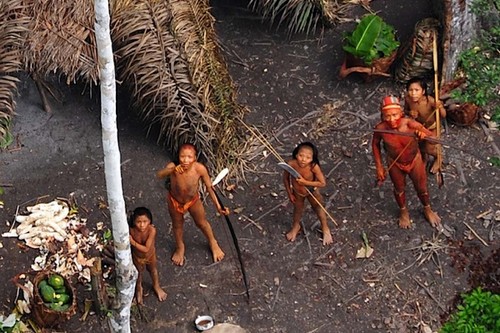 The majority of the world’s uncontacted tribes, probably more than 50, live in Brazil. Today, there are around 896,000 indigenous in Brazil in over 238 tribes, who live scattered across the country. Brazil’s tribal peoples live in a wide range of environments – tropical forests, grassland, scrub forest and semi-desert – and have a wide range of ways of life.

At the time of first European contact, some of the indigenous peoples were traditionally semi-nomadic tribes who subsisted on hunting, fishing, gathering, agriculture, and arboriculture. Many of the estimated 2,000 nations and tribes which existed in the 16th century died out as a consequence of the European settlement. Must of the indigenous population died due to European diseases and warfare.

Most tribes live by a mixture of hunting, gathering, and growing plants for food, medicine and to make everyday objects. Probably only the uncontacted Awá and Maku are completely nomadic, living entirely by hunting and gathering in the Amazon. 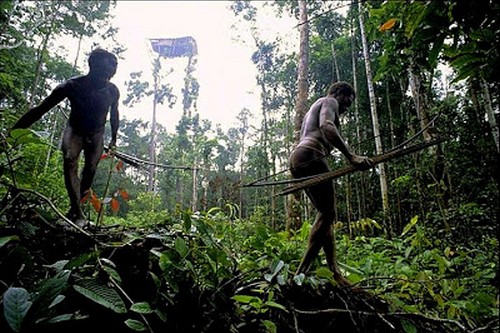 The Korowai tribe of Papua (the southeastern part of the western part of New Guinea), Indonesia, was first contacted in the 1970s by archaeologists and missionaries, at which point they were still using stone tools and living in wooden treehouses. The Korowai, also called the Kolufo, are number about 3,000. Until 1970, they were unaware of the existence of any people besides themselves. They avoid the modern world for so long, because they believed that the entire world would be destroyed by an earthquake if they ever changed their customs.

The majority of the Korowai clans live in tree houses on their isolated territory. Since 1980 some have moved into the recently opened villages of Yaniruma at the Becking River banks (Kombai-Korowai area), Mu, and Mbasman (Korowai-Citak area). 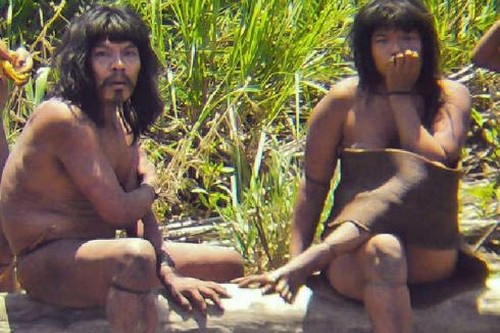 The Mashco-Piro, also known as the Cujareño people, are an indigenous tribe of nomadic hunter-gatherers who inhabit the remote regions of the Amazon rainforest. They live in Manu Park in the Madre de Dios Region in Peru. They have in the past actively avoided contact with non-native peoples. 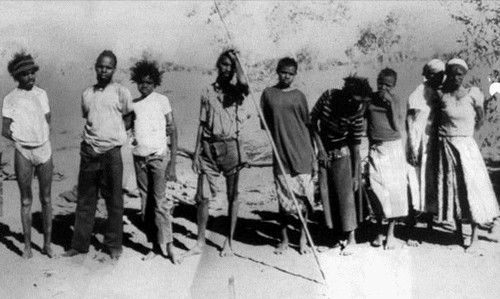 The Pintupi Nine were a group of nine Pintupi people who lived a traditional hunter-gatherer desert-dwelling life in Australia’s Gibson Desert until 1984, when they encountered near a settlement with their relatives in Western Australiawith. They are sometimes also referred to as “the lost tribe”. They are believed to be the last Aborigines to have been living this way. The group lived a nomadic, hunter-gatherer way of life in the Great Sandy Desert. Their diet was dominated by goanna and rabbit as well as bush food native plants. The group is a family, consisting of two co-wives (Nanyanu and Papalanyanu) and seven children. There are four brothers (Warlimpirrnga, Walala, Tamlik, and Yari Yari) and three sisters (Yardi, Yikultji and Tjakaraia). The boys and girls were all in their early-to-late teens, although their exact ages were not known, the mothers were in their late 30s.

The group belonged to the Pintupi community. They were tracked down by speakers of their own language and told that there existed a place where water flowed from pipes, and where there was a general surplus of food. While most of the group decided to stay in the modern town, a few of them becoming traditional artists,but one member, Yari Yari, returned to the Gibson Desert, where he remains today. 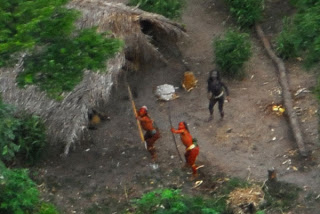 The Sentinelese are a tribe of about 250 – 500 people who live on North Sentinel Island, between India and Thailand. They are one of the Andamanese indigenous peoples and one of the most uncontacted peoples of the Andaman Islands. We don’t know much more than that, because every time the Sentinelese receive a visitor, they greet him with a hail of arrows.

They are noted for vigorously resisting attempts at contact by outsiders. The Sentinelese maintain an essentially hunter-gatherer society subsisting through hunting, fishing, and collecting wild plants. There is no evidence of either agricultural practices or methods of producing fire. Their language remains unclassified.

The Sentinelese aswell accept a acceptability for getting able to survive accustomed disasters, unlike abounding of the avant-garde humans who reside in agnate environments. For instance, these coast-dwelling humans auspiciously able the furnishings of the 2004 Tsunami, which wreaked calamity in Sri Lanka and Indonesia.

It is estimated that they have lived on their island for 60,000 years. Their language is markedly different even from other languages on the Andamans, which suggests that they have remained uncontacted for thousands of years. They are thus considered the most isolated people in the world.