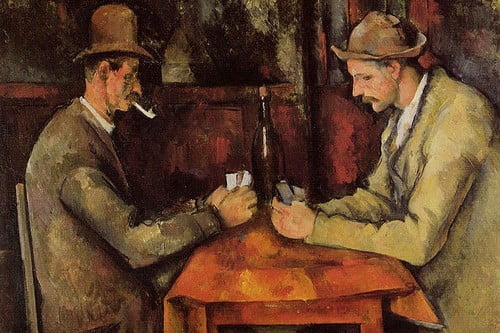 Painting is a powerful form of expression and introspection. Without investment art can never flourish. A good artist may die in the wilderness before having the chance to impact peoples’ lives. Fortunately for painters, they are often supported by admirers with deep pockets and their works are often fetched at high prices. Significance of a painting is evoked by the history and process involved in its making. Prices are fixed accordingly.

The Top 10 Priciest Paintings Ever Sold: 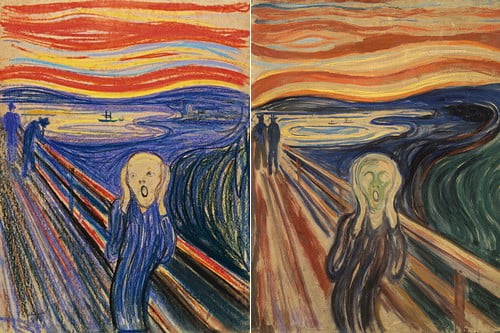 The Artist: Edvard Munch
Cost of the art: 119.9 million dollars.

Created by the Norwegian expressionist painter Edvard Munch, ‘The Scream’ has four versions, two pastels (1893 and 1895) and two paintings (1893 and 1910).He’d also made several lithographs of ‘The Scream’ in1895 and later. The 1895 pastel version is the most colourful and had fetched $119.9 million.

Munch was inspired to create a picture that would represent the universal anxiety of modern man by the following circumstance – “One evening I was walking along a path, the city was on one side and the fjord below. I felt tired and ill. I stopped and looked out over the fjord—the sun was setting, and the clouds turning blood red. I sensed a scream passing through nature; it seemed to me that I heard the scream. I painted this picture, painted the clouds as actual blood. The colour shrieked. This became The Scream.”

The Artist: Pablo Picasso
Cost of the art: 104 million dollars.

Painted as a youth of 24, the creation goes to show the innate talent Picasso held since his early days. He painted this piece in 1905. It was modelled by a local teenage named Little Louis who was an ardent admirer of Picasso. The boy would often hang around the studio for the whole day, looking for chases of offering service and watching Picasso paint.

Critics usually disapprove the high price tagged with this painting because they consider this work as of inferior nature when compared to many other paintings of Picasso. Picasso expert Pepe Karmel, lamented saying “I’m stunned that a pleasant, minor painting could command a price appropriate to a real masterwork by Picasso. This just shows how much the marketplace is divorced from the true values of art.” 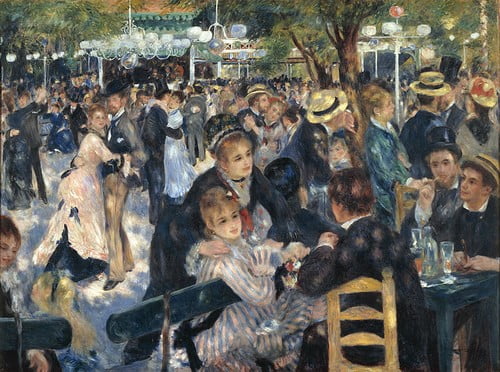 The Artist: Pierre-Auguste Renoir
Cost of the art: 78.1 million dollars.

Translated as ‘Dance at Le moulin de la Galette’ is an 1876 painting by French impressionist painter Pierre-Auguste Renoir. It depicts a crowd of jolly working class people hanging out in a typical Sunday afternoon. It is celebrated as one of the impressionistic masterpiece. Renoir’s portray is powerfully as it evokes a real life-like image. Between 1879 and 1894, the painting remained in the private collection of another French painter but following his death it was handed over to the French government as payment for inheritance tax.

Interesting fact: Renoir had painted a smaller version of the picturewhich wassold to Ryoei Saito (chairman of a paper manufacturing company in Japan) who incurred the wrath of art fanatics suggesting that he would cremate both ‘Portrait of Dr. Grachet’ (yes, he owns this too) and ‘Bal du moulin de la Galette’ with him when he died.

The Artist: Francis Bacon
Cost of the art: 142.4 million dollars.

Born in Ireland, the British painter Francis Bacon created a triptych of his friend and artist-rival Lucian Freud in 1969. The duo was known to often model for each other. Painted in the typical distorted Bacon style, critics said that it “marks Bacon and Freud’s relationship, paying tribute to the creative and emotional kinship between the two artists.” Although in the mid 1970s they drifted apart over an argument.

The studies were created on three different panels and were sold together until the mid 1970’s when they were purchased separately which made Bacon unhappy. It wasn’t until 80s that the panels were reunited. 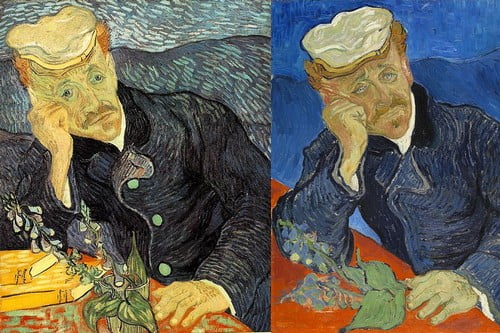 Considered as one of the masterpieces by the post-Impressionist Dutch artist Vincent van Gogh, there are two versions of the painting, both painted in June 1890. Both the paintings were modelled by Dr. Gachet, who took care of Gogh during his final few months before death. The portraits have similar context but follows different style and colours. It was the first version that managed to fetch $82.5 million at a New York auction.

Interestingly, when Vincent van Gogh met Dr. Grachet, he was not at all impressed and shared this anxiety with his brother saying “I think that we must not count on Dr. Gachet at all. First of all, he is sicker than I am….” Yet they became ‘true friends’, the deep relationship prompted Gogh to capture him through his art. This is what Vincent van Gogh said about his painting – I’ve done the portrait of M. Gachet with a melancholy expression, which might well seem like a grimace to those who see it… Sad but gentle, yet clear and intelligent, that is how many portraits ought to be done… There are modern heads that may be looked at for a long time, and that may perhaps be looked back on with longing a hundred years later.

5. Portrait Of Adele Bloch-Bauer I 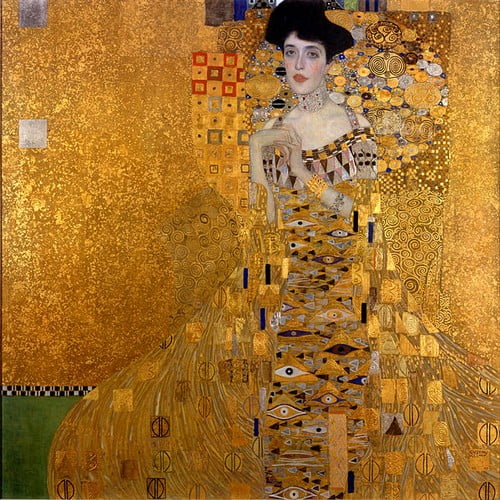 The Artist: Gustav Klimt
Cost of the art: 135 million dollars.

Famous Austrian symbolist painter Gustav Klimt painted ‘Adele Bloch-Bauer I in 1907’. Like many of his male predecessors, counterparts & descendants, Klimt’s primary object of artistic work was the female form. His works are often marked by eroticism. This insanely expensive painting was modelled by Adele Bloch-Bauer. She was the wife of a very wealthy industrialist who sponsored artists. She admired Klimt’s work and supported him. In fact Adele Bloch-Bauer was the only woman whom Klimt had painted twice. This painting was followed by the ‘Portrait of Adele Bloch-Bauer II’.

Interesting fact: Following the end of World War II, the Austrian Museum was in no mood to return the wonderful Klimt paintings to the rightful owner’s family. In January 2006 the court adjudicated to hand the painting over to Maria Altmann – niece of the Bloch-Bauers. Later that year ‘Portrait of Adele Bloch-Bauer I’ was put up for auction, following which it remained as the most expensive painting for the next four months.

The Artist: Pablo Picasso
Cost of the art: 155 million dollars.

Interesting fact: Casino Magnet Steve Wynn had purchased ‘Le Rêve’ in 2001 for $60 million and while showing it to some of his friends he put his elbow on the canvas causing a 6 inch tear. Following a $90,000 repair, Steven A. Cohen bought the painting from Wynn in 2013. 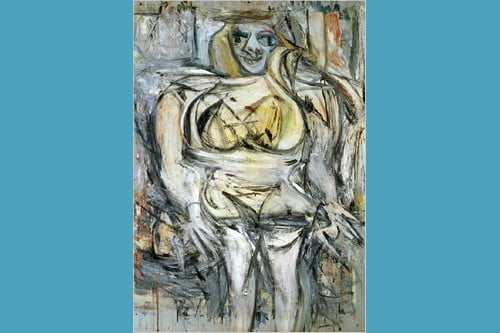 Born in Netherland, Kooning was an American abstract-expressionist painter who was a part of the group of artists who came to be known as the ‘New York School. ‘Woman III’ is one of the six paintings made by Kooning between 1951 and 1953. The primary theme of this series is women.

In this series Kooning has made use of aggressive brushwork and strategically placed high-key colours. Evoking some of modern man’s stereotypical sexual fear, Kooning gave his women toothy snarls, drooping overripe breasts, large eyes and other such extremities.

Interesting fact: In the 1970’s, ‘Woman III’ was a part of the Tehran Museum of Contemporary Art Collection. Following the Iranian Revolution of 1979, the work of art was banned for public viewing. Finally, in 1994 it was quietly traded by Thomas Ammann Fine Art to David Geffen for the remainder of the 16th century Persian manuscript, the Tahmasbi Shahnameh.

The Artist: Jackson Pollock
Cost of the art: 140 million dollars.

Jackson Pollock, one of the most influential American abstract expressionist painter created ‘No. 5, 1948’ in the year 1950. If you gaze at the above painting for a few second you could see nest-like appearance which was made by drizzling yellow and brown paint on top the painting.

Interesting stuff: ‘No. 5, 1948’ has reportedly been sold to David Martinez at a price of $140 million but his attorney has denied of any such transaction. Auction expert Josh Baer indicated back in 2006 that Martinez was not the buyer of the painting. Then who is?

Famous French post-expressionist painter Paul Cézannepainted ‘The Card Players’ in the early 1890s during his ‘final years’. It is a series of five oil paintings varying in size and the number of players depicted. One of the paintings has been sold to the Royal family of Qatar at an estimated cost of around 250 to 300 million dollars.

The models of these painting were local farmers. The art depicts men playing cards with their eyes downcast focusing on the cards. The ‘absolute concentration’ of the men prompted one critic to describe the scenes as “human still life”. Cézanne’s paintings generally involves intense character study and both Matisse and Picasso had called him “the father of us all.”

You may also like 10 of Pino Daeni’s Most Beautiful Paintings.