One of the richest and most successful men on earth, Bill Gates is the perfect example to the saying “learners are earners”. Gates’s personal blog, Gates Notes, clearly exhibits his devotion to reading and learning. On reading, he quotes, “I really had a lot of dreams when I was a kid, and I think a great deal of that grew out of the fact that I had a chance to read a lot.”

Here are ten Bill Gates Suggested Books that he thinks everyone must read. 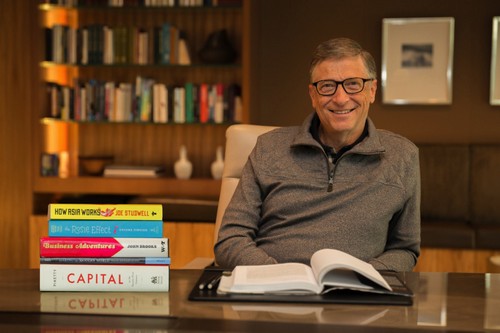 1. ‘My Years with General Motors’ by Alfred Sloan

Bill Gates told Fortune, “My Years with General Motors is probably the best book to read if you want to read only one book about business.”

This New York Times bestseller was an immediate hit when it was first published. My Years with General Motors is about Sloan’s fifty years with the company. How he achieved remarkable success at his job and took over the company. How he made the company earn unprecedented profits. The book scores high with its insights on management and leadership.

Bill Gates remarked on the book, “Today, more than two decades after Warren lent it to me–and more than four decades after it was first published–Business Adventures remains the best business book I’ve ever read. John Brooks is still my favorite business writer.”

The book stays so close to Gates that he came up with a short video about it. The video features interviews with Warren Buffet and other renowned business leaders.

3. ‘Better Angels of Our Nature’ by Steven Pinker

During reddit’s AMA Bill Gates said that “Better Angels of Our Nature” is his “favorite book of the last decade”. He added that “it is long but profound look at the reduction in violence and discrimination over time”

A Steven Pinker book, The Better Angels of Our Nature puts the case that violence in the world has declined, with backing arguments.

Bill Gates wrote about the book, “I think anyone who reads it cover to cover will come away with two reactions: First, how Warren’s been incredibly consistent in applying his vision and investment principles over the duration of his career; and, secondly, that his analysis and understanding of business and markets remains unparalleled.”

Tap Dancing To Work is an impressive collection of articles and essays about and by Warren Buffett, compiled by Fortune magazine journalist Carol Loomis.

5. ‘Where Good Ideas Come From’ by Steven Johnson

Bill Gates wrote, “Especially for people in business or education, it’s a worthwhile book. It talks about the institutional structures that facilitate good ideas–how you get lots of people thinking about cutting edge problems, how you put people together in a space where different skill sets and influences can come together, how you make the right kinds of materials available but don’t force a conclusion.”

6. ‘Life is What You Make It’ by Peter Buffett

Gates said, “Contrary to what many people might assume, Peter won’t inherit great wealth from his father. Instead, he was encouraged by his parents to find his own path. The book is a chronicle of that journey–and the wisdom and perceptions he has developed along the way.”

Though born in an affluent family, Peter chose not to walk in the shadow of his famous second name. He found his own way of life and made a success at that.

7. ‘The Language Instinct: How the Mind Creates Language’ by Steven Pinker

A 1994 book by Steven Pinker, The Language Instinct is a classic study on all possible characters and dimensions of language. Written for a general audience, it talks about how language works, how we learn it, how our brain understands it, changes over time and evolution. The book received the William James Book Prize from the American Psychological Association and the Public Interest Award from the Linguistics Society of America.

8. ‘Moonwalking with Einstein’ by Joshua Foer

Bill Gates commented about the book, “Like most people, I’m fascinated by how the mind works, and memory is a big element of that. Part of the beauty of this book is that it makes clear how memory and understanding are not two different things. Building up the ability to reason and the ability to retain information go hand in hand.”

Gates commented about the book, “The dismal results presented in Academically Adrift are based on the Collegiate Learning Assessment, a standardized test in which students are asked to make a practical decision–such as, what kind of airplane a company should buy–and explain their choice based on a set of goals and facts about different options. I’m optimistic about the potential of innovation to help solve many of the problems with our post-secondary system. But we need more and better information.”

10. ‘The Ten Commandments for Business Failure’ by Donald R. Keough

Donald Keough shares with the world the story of his sixty-year career. He discusses the failures he faced and some other infamous failures. His commandments for failure include: Quit Taking Risks; Be Inflexible; Assume Infallibility; Put All Your Faith in Experts; Send Mixed Messages; and Be Afraid of the Future.