Launching a ship into space is an expensive and sluggish process of weird science and engineering. Basically, we need rockets, extreme motors that eject high-speed propellant exhausts to generate thrust. Their operation is a technological miracle by the last-century standards, but the basics are pretty easy. At elevated pressure, an igniter triggers the fuel to explode inside a combustion chamber along with a source of oxygen (usually liquid). The resulting fluid escapes by the end nozzle as reaction mass.

Unlike air-breathing jets, rockets can’t stream atmospheric gases to produce motion because at orbital heights the atmosphere becomes too thin. So a rocket engine must propel off its own exhaust fluid to get thrust. Looks simple, but the technical issues involved in project, built, assemble, and test operational spacecraft skyrockets the budget of any satcom launching.

Apparently, overcome Earth’s gravity and reach outer space is the limit for the current chemical rockets, which use exothermic reaction as propulsion. Fortunately, applied science is less a matter of fighting physics than figuring out how to make its laws work favorably. Here come 10 concepts of spacecraft drives that may expand the horizons of humanity. 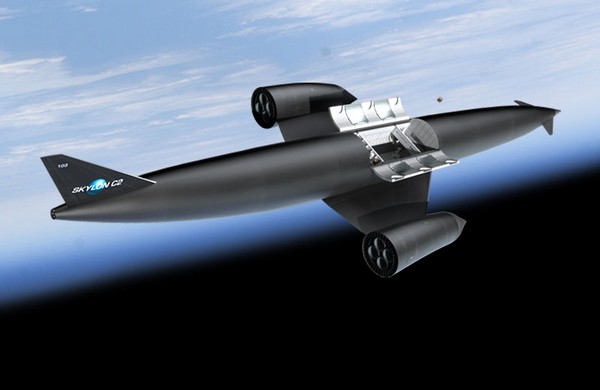 One method to build cheaper spacecraft could be the single-stage-to-orbit (SSTO) approach, a conceptual propulsion system that doesn’t rely on jettisoning hardware to reach orbital height. It would use atmospheric air during launch to feed the engine’s burning reaction, which will avoid carrying extra oxidizer and therefore decrease weight.

Following such proposal, the British company Reaction Engines Limited (REL) designed its Skylon spaceplane to operate using SABRE, a concept of air-breathing engine. To count only on its own inner hardware to get thrust, SABRE will be able to switch between two modes of operation—a typical turbojet relying on atmospheric air to feed internal combustion, and a conventional rocket engine using liquid oxygen supply.

REL released a proposal for a manned voyage to Mars that would employ Skylon spacecraft to build the mission ships in orbit. 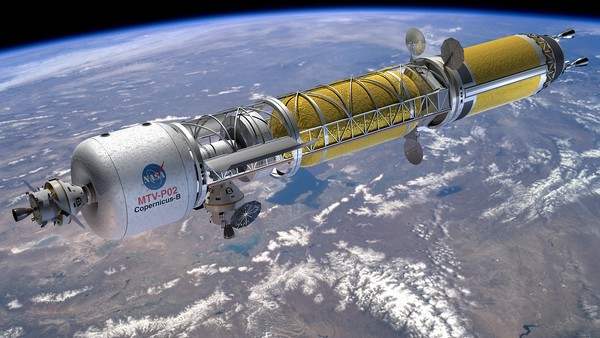 Rosatom, a Russian state corporation that manages internal nuclear affairs, is building a rocket engine that would take just 45 days to travel from Earth to Mars (against the current 18 months). Such technology will be similar to the nuclear thermal rockets (NTRs) URSS designed during Cold War. Inside an onboard reactor, the energy released from splitting atoms superheats working fluid to create high pressure, and hence thrust, like what propellant-burning reactions do in a chemical rocket. Due the energetic density of nuclear fuel, NTR engines weight less and have a low consumption rate. 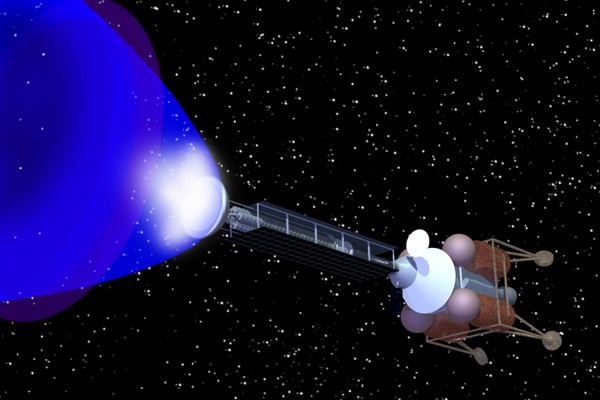 Every physical substance in the universe is composed of matter; matter consists of particles, and for every particle, there is a dark twin—the antiparticle. An antiparticle has all of its counterpart’s traits, except opposite charge. When both twins interact, they annihilate each other and let out energy in the process, a lot of energy. NASA scientists want to employ this power to boost rocket engines into interstellar travel age.

Similarly to NTRs, antimatter annihilation would heat up working fluid to generate thrust, but with a fuel efficiency exponentially greater. 100 milligrams of antimatter are enough to reach Mars, whilst a chemical rocket would need tons of propellant for a manned mission. Researchers want even to fund an antimatter ship on Kickstarter. 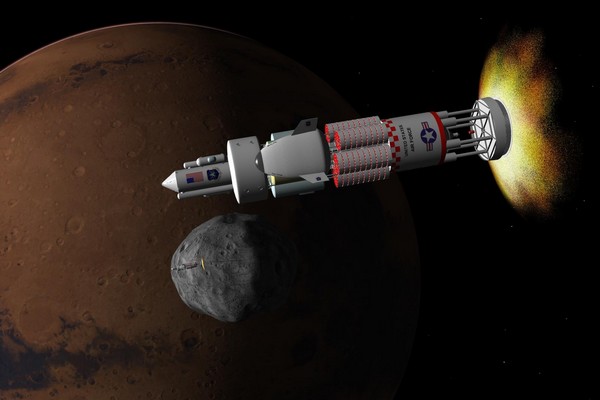 What about a voyage to Alpha Centauri dropping atomic bombs on the way to propel your spaceship? Nuclear pulse propulsion may be the most feasible path to interstellar travel. Started in 1958 as a DARPA enterprise, Project Orion was craving to build a true space-opera ship—submarine-style construction, 200 crew members, thousands of tons of takeoff weight — and launch it into orbit using nuclear pulse propulsion. Everything viable, theoretically and engineeringly speaking.

An Orion engine could produce megatons of thrust directing small nuclear explosions against a massive plate of steel joined to the spacecraft with shock dampers, but political issues and budget proved to be problems worse than mechanical hurdles. Project Orion was closed in 1965 after several accomplishments, however, similar concepts like Medusa spacecraft and antimatter-fission propulsion are still under research.

Electrically charging propellant molecules and then boosting them through magnetic fields is an extremely effective way to propel spacecraft—despite the tiny impulse force, ion thrusters are multiple times more energy-efficient than chemical rockets and eventually match exothermic propulsion in the long run. By the way, that was the system that propelled Dawn spacecraft till Vesta and Ceres.

Funded by the Air Force Office of Scientific Research, the University of Michigan is developing an experimental ion thruster termed NanoFET. The engine would fire off trillions of propellant nanoparticles through nanoelectromechanical systems, opening a thruster-on-a-chip concept that can propel the miniaturized satellites of tomorrow. Grids of NanoFET modules could be flexibly adapted and escalated to suit different designs and engineering needs. 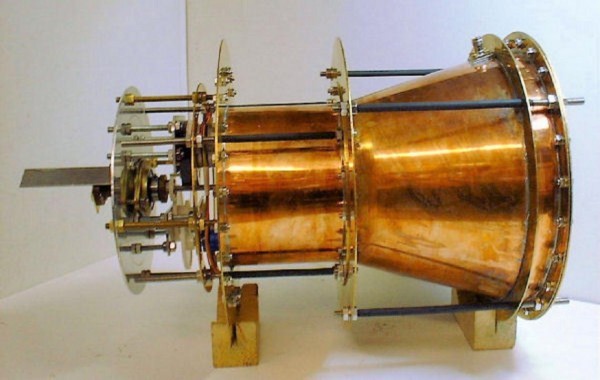 Rockets expel propellant (action) to get thrust (reaction) in accordance with Newton’s third law, but what if a drive could break this basic rule of nature? Roger Shawyer, a British aerospace engineer, believed that it was perfectly possible when in 1999 he proposed a reactionless engine called radio frequency resonant cavity thruster or just EmDrive (Electromagnetic Drive). An EmDrive would bounce microwaves inside a cone to produce thrust toward the narrow end. The experiment created controversy in the scientific community even after Chinese, German and NASA researchers have reproduced Shawyer’s procedures with positive results.

How EmDrives work exactly remains on the edge of physics. The theory of quantum fluctuation says that vacuum fizzes with energetic particles popping in and out of reality. Interacting with these particles through microwaves, it would be possible to a ship get thrust.

Young K. Bae is a Ph.D. Dr. physicist founder of the Y. K. Bae Corp—an endeavor dedicated to research “green” technologies in the fields of energy and space travel. Bae’s patents include photonic railways, a new molecular class, and the Photonic Laser Thruster (PLT). Bae studied the PLT with NASA funding and was able to design a concept of space driver that wouldn’t need to carry fuel tanks. Instead, the PLT will receive its thrust from lasers fired at the spaceship. Since the vacuum is frictionless, a PLT-driven craft would steadily gain momentum to go the distance to Mars in a matter of days.

Developments in Directed Energy technology will be crucial to delivering multi-megawatts laser beams capable of thrusting a spacecraft through outer space, enabling an architecture free of heavyweight components, such as fuel and main power supplies. 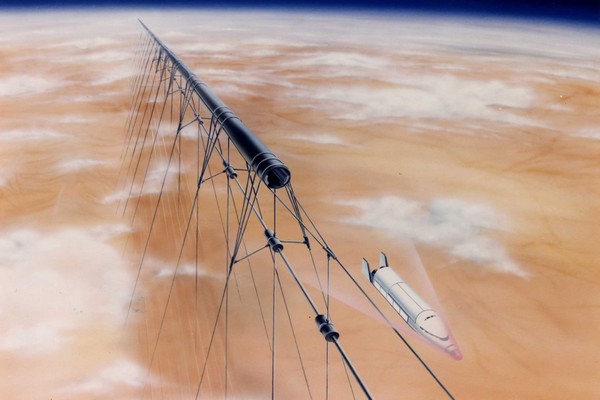 Science Fiction writers, such as Arthur C. Clarke and Robert Heinlein, have reckoned on electromagnetic catapults as plot devices for decades. Even today, magnetically accelerate a payload hundreds of miles above Earth may seem pure Sci-Fi, and yet scientists like Dr. James Powell and Dr. Gordon Danby think it will be part of the space travel’s future. Powell and Danby co-invented superconducting maglev (magnetic suspension), permitting the current EM trains to be developed, and now they want to apply the technology in space travel through their Startram Project.

In Powell and Danby’s vision, coils would produce a strong magnetic field to thrust a spacecraft or payload at high-speed across miles of railroad, similarly to what happens to a coilgun’s project. To achieve enough momentum, the track will have several miles of length and cost tens of billions of dollars, but—according to its inventors—it’s a small price to pay for the future.

Sun, like any other star, constantly spouts charged particles—a true gale of high-speed protons and electrons. Such radiation pressure can push against a magnetic field and generate thrust.

After a decade of space wander, a sunjammer spacecraft would be able to cross the far borders of our solar system without wasting any fuel, maneuvering in exoplanetary magnetic and gravitational fields to calibrate its trajectory. The direction of thrust could be adjusted by changing the sail according to the solar wind.

Since the propulsive force would depend on the magnetic field’s size, a solar sail would need hundreds of meters and kilometers of superconductor material to produce its magnetic field, resembling cyclopean loops of wire instead of the Navigation Age’s wind-catching canvases.

NASA plans to deploy a solar sail in 2018 during the flyby survey of Asteroid Scout. 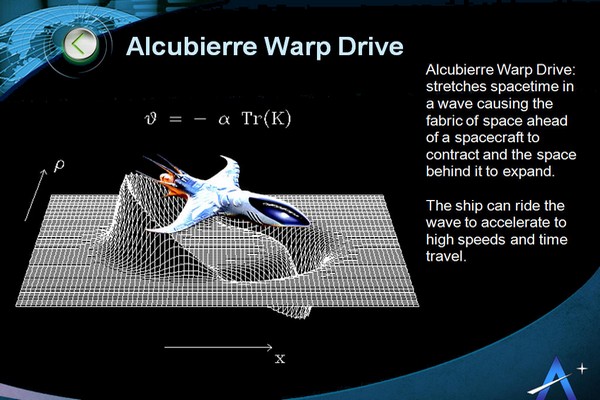 Einstein field equations state that energy and matter can curve the spacetime mesh of reality. Speculatively, stretching the fabric of space behind a ship and contracting the space ahead of it, it’s possible to achieve apparent FTL (faster-than-light) travel. Of course, it would be the space moving and not the ship, like a scrolling game, so no relativistic law would be broken. Riding on a warp bubble of spacetime waves, our ship may reach velocities many orders of magnitude greater than that of light. We could even travel to Mars in less than a second, but I think deceleration would be a problem!

The Alcubierre drive or just warp drive was proposed by Mexican physicist Miguel Alcubierre as a solution to Einstein field equations, which states that energy and matter can curve the spacetime mesh. Using a field of less-than-zero mass, the warp drive would cause the fabric of space to twist and scroll by.