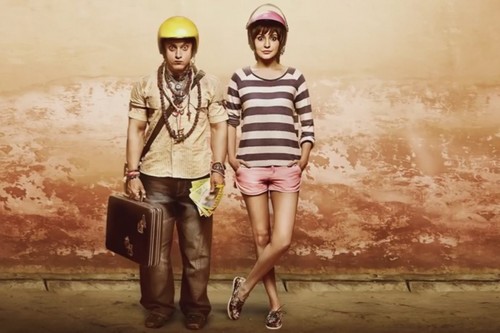 Below is a list of top ten highest grossing worldwide Bollywood movies of all time. Hum Aapke Hain Koun..! (released in 1994) was the first Bollywood film to cross INR 1 billion (US$15 million) worldwide.

Dangal was released in the United States on 21 December 2016 and worldwide on 23 December 2016. The film was shown on an estimated 4300 screens in India and 1000 screens internationally. The movie is fifth highest grossing non-English films of all time.

Releasing on Eid 2015, Salman Khan’s “Bajrangi Bhaijaan” beats ‘Happy New Year’, ‘3 Idiots’ lifetime earnings. The film has become the first Bollywood film of 2015 to cross ₹300 crore with its net collection at the domestic box office. The movie took just 9 days to earn ₹200 crore from its domestic box office run. It is the third fastest film after “PK” and “Dhoom 3” to earn ₹200 crore in just nine days.

PK is all set to create history by entering the 300 crore club by the end of its 3rd Sunday run. PK,  so far, has collected 326 crores nett at the Domestic Box Office, which takes its Gross total to 470c. And on the overseas front, the movie has earned 156 c gross, that takes its Worldwide gross business to 626 crores at the Box Office. The film stars Aamir Khan in the title role, with Anushka Sharma, Sushant Singh Rajput, Boman Irani, Saurabh Shukla, and Sanjay Dutt in supporting roles.

The film opened in 22 international markets during its opening weekend and grossed $28.7 million placing at #3 at the worldwide box office behind The Hobbit: The Battle of the Five Armies and Gone with the Bullets. In North America, the film set an opening weekend record with $3.75 million (previously held by Dhoom 3) placing at #10 at the box office.

2.0 is an Indian science fiction action film, featuring Rajinikanth reprising the roles of Vaseegaran and Chitti, alongside Akshay Kumar and Amy Jackson. It was released on 29 November 2018 world wide. With production budget of ₹543 crore (US$76 million), 2.0 is the most expensive Indian film to date. And, the movie earned ₹117.34 crore on its first day, which was the second highest ever for an Indian film. In addition, it crossed ₹400 crore in its opening weekend to be the highest-grossing film worldwide for that week. As of now, 2.0 has earned more than ₹800 crore, and is the sixth highest-grossing Bollywood film of all time.

Sultan is a mixed bag of emotion, action, love and of course Salman Khan. Directed by Ali Abbas Zafar. Produced by Aditya Chopra under the Yash Raj Films banner. The film focuses on Sultan Ali Khan, a fictional wrestling champion from Haryana whose successful career creates a rift in his personal life.

Sanju is a 2018 Indian biographical film starring Ranbir Kapoor as Dutt, along with an ensemble cast which features Paresh Rawal as Sunil Dutt, Vicky Kaushal, Manisha Koirala as Nargis, Dia Mirza as Manyata Dutt, Sonam Kapoor, Anushka Sharma and Jim Sarbh. The film follows the life of Bollywood actor Sanjay Dutt, his addiction with drugs, arrest for alleged association with the 1993 Bombay bombings, relationship with his father, comeback in the industry, the eventual drop of charges from bombay blasts, and release after completing his jail term.

See also; Top 10 of the most stylish Bollywood actresses.

The Hindi film industry “Bollywood” is the world’s largest film production center. The first feature film (silent black-and-white) produced in India was the “Raja Harishchandra” produced by Dadasaheb Phalke in 1913. With the passage of time, the industry expanded and the number of films produced.

Initially, the success of a film was determined by box office longevity than revenue. However, due to increasing competition from television and the threat of piracy, and later the advent of alternative media, longevity of films decreased drastically and revenue became the focus of success.