Many people expect horror movies to be gory, gruesome, and disgusting. This list is focused on a lesser known part of the horror genre, the psychological horror. Each of the films listed here are focused on a deeper story than just one killer murdering people for no apparent reason. These ten films will haunt you much longer than the typical slasher, and will leave you with an irrational fear on being confined with no escape! So check out the top 10 psychological horror films:

‘Haunter’ is one out of many relatively unknown psychological horror films of the twenty first century. The film is about a teenage girl who wakes up to the same day over and over again, a time loop that doesn’t end. It’s very repetitive at times, but the fact that she is trapped inside her house is why this movie makes the list. The house she lives in, with her family, is decent sized; but she is unable to leave. Every day she wakes up in her room, and her family is doing the same tasks and saying the same things. The family seems oblivious to the repetition and unaffected when the girl does something different than the day before. As the movie progresses, the feeling of being trapped will sink in, and the claustrophobic feelings will be more and more apparent. 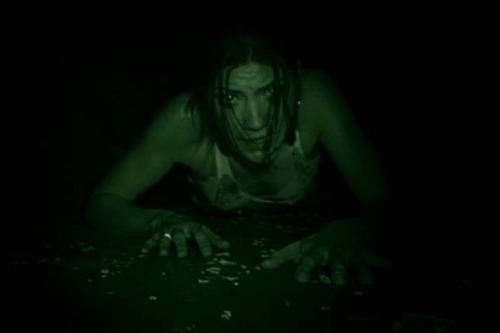 Being trapped in an apartment building filled with zombie like people is an original take on the horror genre. Not only is it terrifying and haunting, the feeling of being trapped and losing track of time is imminent. People will become crazed and paranoid about death, survival, and how long they have been trapped. An apartment building may seem large and spacious, but when you are stuck in an area with cannibalistic humans coming after you, and no place to run, the space becomes smaller and smaller with each passing second.

The movie almost gives a new outlook on the definition of claustrophobic, and it shows that the fear of being trapped in confined places isn’t always irrational. ‘Quarantine’ may not have had the best critic reviews or ratings nut it’s definitely one of the best psychological horror films ever made. It will leave you filled with fear if you ever have to rent at an apartment complex, and it will definitely give you a reason to be claustrophobic.

When vampires take over the world, you might think that there will be plenty of empty towns, houses, and other structures to hide in during the night when it’s not safe, and you are right, unless you live in Alaska. Alaska is the largest and fifth least populated state, which makes it seem like a perfect hide-away, but the weather conditions can be brutal and deadly alone. There’s parts of Alaska where the sun doesn’t rise for long periods of time in the winter, and for many weeks in some areas.

‘30 Days of Night’ being among the greatest psychological horror films, plays on this time, and sends a group of vampires to attack a small town during the darkness. Being isolated in a small dark town during winter is scary enough, but throws hungry vampires in, and you have a movie with claustrophobia written all over it. The hiding places are hard to find, especially when there are more vampires than humans, which means smaller spaces. Just think of how claustrophobic you would become if you were trapped in a crawlspace while vampires are hunting just a few feet from you. This movie will not only make you claustrophobic, it will make you fear all houses with small attics, and will make you never want to visit Alaska.

One of the top psychological horror films that aren’t recognized to its full potential is ‘Beneath’, it will give any audience claustrophobia. A group of coal miners are going about their daily routine, when the mine collapses and traps them six hundred feet under the surface. The minors retreat to an emergency shelter built in the mine to wait for help, but they begin to see and hear things outside the shelter, and they realize that help would take a while to arrive.

As paranoia sets in, and the air becomes toxic to breathe, the group starts to go insane, even though they all know that their survival depends on them being calm and collected. Even the setting of the movie is more than enough to cause the viewer to be claustrophobic, but with the paranoia and other dangers, the movie brings out more than just the fear of being stuck in a confined space with no escape. Coal mining is no longer looked at as a common job, and many people would fear being in a mine that isn’t collapsed, especially with power tools and machines. Beneath shows how dangerous the air underground is, and how coal miners and other underground workers risk their lives every day. 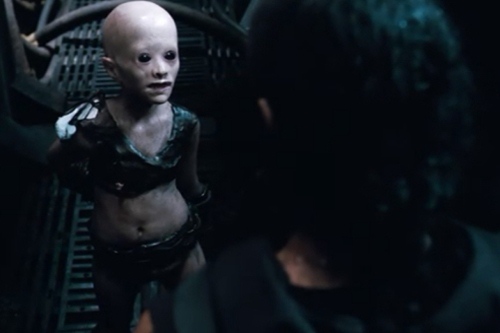 The title of this movie isn’t in the dictionary, but if it was, then you would know that the movie will make you question your sanity and reality. Regarded as one of the greatest psychological horror films by many fans, ‘Pandorum’ is a sci-fi horror, about a spaceship on a trip to a new planet after earth becomes low on resources. It starts out with crew members waking up, without any memories, and trapped in a room control. They have no power in the ship, and one member has to travel through small air vents to reach the reactor in order to restore power to the ship. The setting is filled with confined areas, and will surely make you never want to go into space.

‘Pandorum’ is more of a psychological thriller in some aspects, rather than horror, but there is no doubt that claustrophobia and isolation are used as elements to make the movie more terrifying and confined. These elements are brought in early on in the movie, so make sure you don’t watch ‘Pandorum’ in a small room!

Being in a submarine for long periods of time can cause claustrophobia, paranoia, and delusions. Below uses all three of these human mind problems to deliver a horror movie that will haunt your dreams for weeks after watching it. Set in a submarine during World War II, a crew is on a routine mission to save survivors from a sunken ship, but a horrible secret lies within the underwater boat, one that slowly starts to haunt all the members of the crew. The minds of the crew members start to break, and some become different people entirely. The rooms and halls in the sub are all small and crowded, and as the dangers close in, so does the amount of space to move. This thriller proves how easily the human mind can be manipulated in certain situations, and will make you fear any boat. 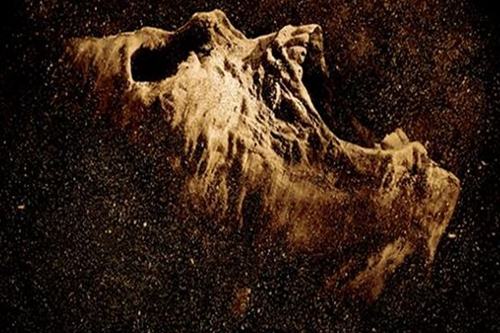 The title says it all when it comes to tight spaces and isolation. ‘The Pyramid’ starts out somewhat innocently, with archaeologists discovering a new pyramid that could potentially hold many lost secrets. As they go deeper into the structure, the corridors seem to get smaller, and the feeling of being trapped becomes stronger. While the characters search for a way out, they realize that they are not alone, and must avoid the creatures that reside in the pyramid. The darkness and confined rooms sink in toward the climax of the film, and the audience will feel the fear that the characters in the movie feel. ‘The Pyramid’ is counted among the best psychological horror films made in recent times and is easily a film that will leave even the most hardcore horror fans squeamish when it comes to being trapped. 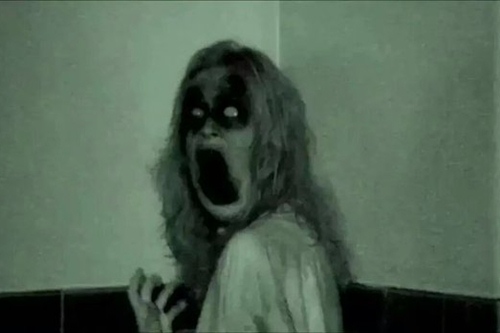 ‘Grave Encounters’ takes a whole new approach to the “found footage” psychological horror films. As a personal favorite, this film can be vouched for as a nail biter when it comes to being stuck somewhere. Although there are two films, the first is the only one that will be focused on since it plays more on the trapped setting than the second. As a group of paranormal investigators film their television show at a “haunted” and shut down asylum, they begin to get lost and trapped inside the building, and it doesn’t take long for the paranoid feelings to start. Grave Encounters has a dark setting throughout the entire film, the fear of the characters will be passed on to the viewer, and will have a fear of being trapped that will last a lifetime. 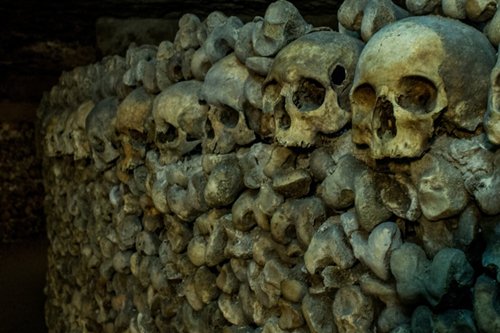 ‘As Above, So Below’ is a horror movie that you know will be terrifying by reading the description. Even the trailer will leave you claustrophobic, and might also make you afraid to watch the movie. A group of history explorers decide to enter the catacombs under Paris, which just screams small passages and terrifying secrets. As the group goes deeper into the catacombs, they face the danger of collapses, getting lost, and more.

The catacombs underneath Paris are a huge mystery; they contain the remains of six-seven million people, and have many passages with poems and messages written on the walls. It has been illegal to enter the catacombs since 1955, however; the laws do not stop the homeless, kids, and real life explorers from entering the labyrinth. There are tours given of the catacombs, but only two kilometers are covered, and that’s not much considering that the catacombs are twenty kilometers deep. By the end of the movie, you will easily understand why the catacombs are prohibited other than tours ran by historians. As Above, So Below will leave an imprint in your mind that will cause a fear of being stuck in small spaces, even if you never go near the catacombs of Paris. 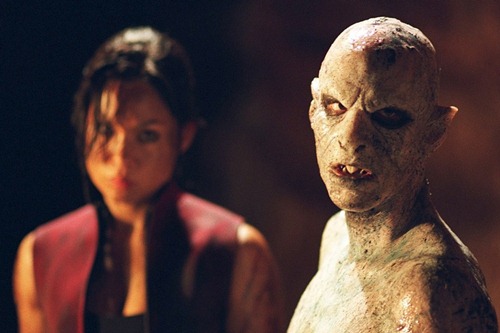 At number on in our list of top psychological horror films is ‘The Descent (part 1)’. It starts as a getaway after a horrible accident, but ends with terror that will scare anyone, especially cave divers. Six women travel to the Appalachian Mountains to explore an untouched cave, but find more than they can handle in the dark and isolated system. Unlike Grave Encounters 2, both The Descent and The Descent 2 have incorporated the tight spaces and claustrophobia into them. However, the first film is more likely to cause the viewer to have claustrophobia. Both films are set in the same cave system, which is filled with monsters that hunt anything with a heartbeat. The cave is unknown, and the system is small in many areas, but it is also a giant puzzle. Becoming disoriented is easy when you have been in the dark for long periods of time, especially in an area where people haven’t mapped out.

The Descent is number one because it really uses claustrophobia to make it scary, with the hiding places being tight, and being trapped in a dark hole. Having no place to go when you are being hunted is a horror that many people wouldn’t ever think of, but they might if they watch this movie!