Shia is one of the main sects of Muslims. There are many sects in Muslim religion, but Shiite sect is most prominent who are present all around the world. Many people have great interest in their mores. Some real but most interesting facts about SHIA are: 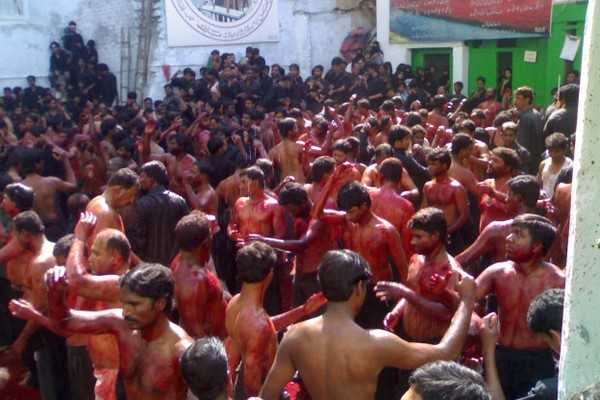 Everyone in this world loves themselves more than anything, except Shia. Self-flagellation is one of the most tough and courageous task to do. According to Shia’s self-flagellation is the important part of their faith. Shia’s basically shows their love and mourning related with Imam Hussain a.s. Imam Hussain a.s was the great personality and grandson of Hazrat Muhammad (P.B.U.H) and every religion knows His personality well. On the day of Ashura i-e 10th of Muharram Shia’s beat their chests, backs and some of them use steel chains for this purpose.

After the tragedy of Karbala, sisters of Imam Hussain (a.s) were not allowed to weep for their beloved ones and they were caught with ropes in their hands. This self flagellation was their act and then followed by thy lovers of Holy Prophet’s family. According to Shiite sect self-flagellation is to show their love toward Hussain a.s and is like a protest against Yazid who killed Imam Hussain, but other Muslims always take it as “Bidah” means not-allowed in Islam. 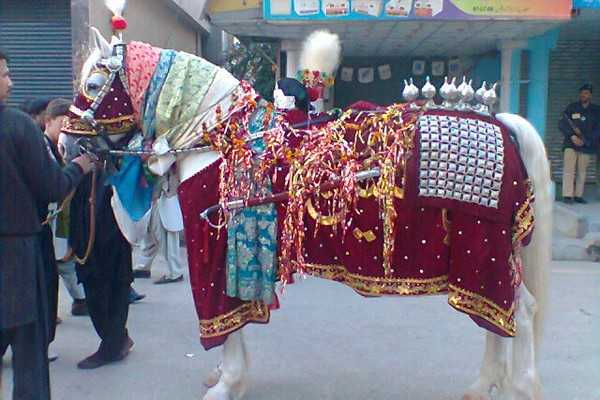 Zuljanah refers to the Horse of Imam Hussain a.s. On every Ashura, Shia’s used to take a special horse which is embellished by them with jewels and gold. It is part of their faith that during their juloos this Zuljanah has soul of Imam Hussain a.s and He is riding on this horse. Real name of Imam Hussain’s horse was “Murtajiz” who was purchased by Holy Prophet (P.B.U.H) and was given to Imam Hussain as a gift. Zuljanah basically means “flying horse” or “Horse with wings”.

During tragedy of Karbala when Imam Hussain a.s was left alone and was praying between 9 lack opposition army, at that time this horse “Murtajiz” was there to protect Hussain from enemy and had taken all the arrows on his body. Horse with arrows on both of sides of his body was looking like that He has wings and after that He is known as “Zuljanah”. One can say that if someone wants to see the most beautiful horse then he should see Zuljanah.

Everyone know’s about Mahdi (a.s) and the fact that He will come to this world before some years of the “Day of Judgement”. His arrival will leads towards peace and justice in the whole world. Shiite cast has a great concept about Him, there are 12 Imam’s of Shia’s. Mahdi (a.s) is the last one who is living but concealed imam. He is son of 11th Imam Hassan Askari and His mother’s name is Lady Narjis. Some people have a concept that Mahdi will reborn as a child but Shia nation believes that He was born a number of centuries ago and is now hidden with the order of ALLAH Almighty which is called “Parda e Ghaibat”. According to this nation it is part of their faith that He is present and is hidden like Hazrat Isa, and always keeps an eye upon all of their deeds in daily life. 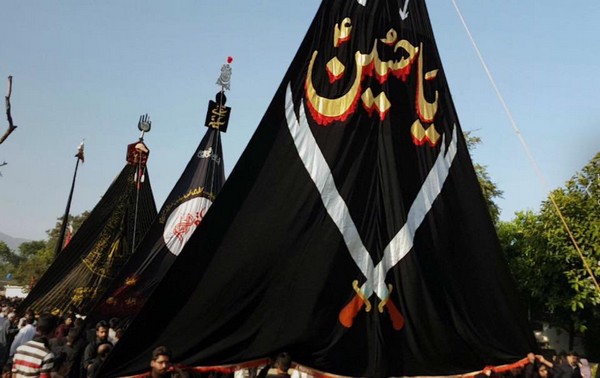 Hazrat Abbas a.s was the son of Hazrat Ali and younger brother of Hussain a.s. He was one of the most brave people at that time and in Karbala he was commander in chief of Hussaini army consisted upon 72 males including children and young ones. He used to take black flag with Him, so this flag which is known as “Alam” is very Holy for Shiite people. Every army has a flag which is their symbol and is supposed to be in the hands of commander in chief of that army. 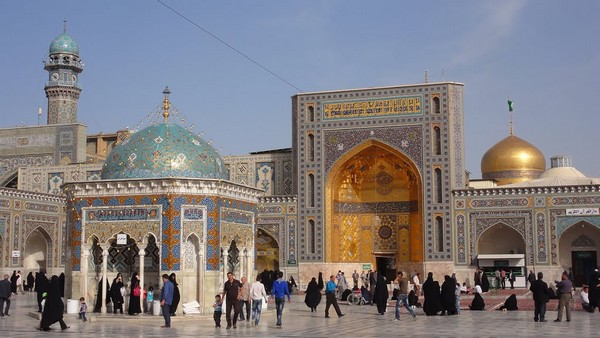 There is a great historic background of Shiite nation. They have all their history safe with them and Holy shrines is one of them. Graves of their Holy personalities are turned into shrines, and most of them are home members of Holy Prophet (P.B.U.H). Their shrines are being visited by many people who came there from whole of the world. Many of those shrines are made up of gold and are so much beautiful. Main shrines are in Karbala (Iraq), and then in Syria. Day of Ashura and 20th of Islamic month Safar there are millions and billions of people gathering there having majority of Shia’s in them. Syria, Iran and Iraq are very historic places for Shiite people and they used to visit all of them whenever they can. 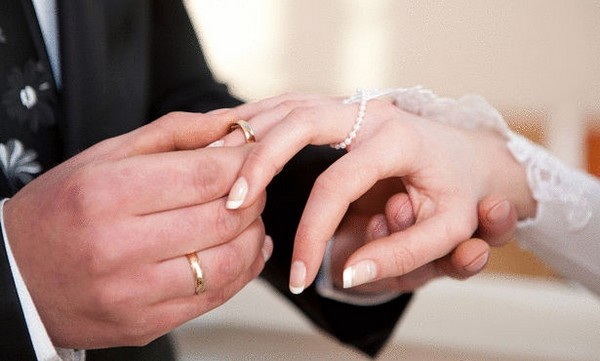 Mutah is temporary marriage i-e marriage having Nikah but for specified time which can be in days, months or some years. According to Shia’s this is not only lawful but also recommended that a man can marry a woman with the intention of divorcing her after a period of time which could even be a couple of days. This type of marriage is a great matter of confusion between Shia’s and other Muslims because this is not lawful for other Muslims. This Mutah has historic background and in Shia Islam this is allowed and lawful. Many bad social evils can be decreased to a great extent if this marriage would apply, according to SHIA. 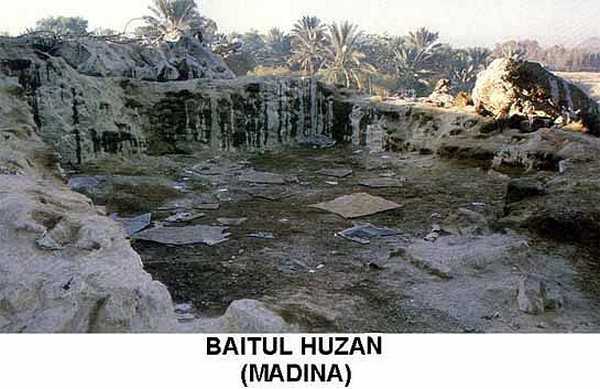 Imam bargah means a room or a place supposed to weep in love of Imam Hussain and their companions. After the death of Holy Prophet Muhammad (P.B.U.H), His daughter Syedda Fatima Zehra (a.s) passed her whole time while screaming and weeping for Her father. People of Madina had tell Hazrat Ali as (Husband of Fatima) that they were getting disturbed with continuous screaming of Fatima (a.s). Hazrat Ali makes a special room for Fatima outside the Madina for this purpose, where Fatima can weep and scream for Her father. The room which was made for this purpose by Ali was named as “Bait-ul-Huzan” and was 1st Imam Bargah. After that now a days there are billions and millions of Imam Bargah in this world where all Shia’s go regularly and show their love with Hussain and his family.

Majlis means gathering of people, and these people have a great unity in this matter. Majlis refers to gathering for Imam Hussain and to show love towards Him. There are special places for these gathering known as Imam Bargah but many people used to gather people at their homes for this purpose. In majlis there is a speaker and other are listeners and speaker speaks about the tragedy of Karbala and then listeners weep on that injustice being done with Hussain and his family and show their love and sympathy in this way. First Islamic month which is Muharram is of great importance with this regard and each day of this month has majlis in all of the Imam bargah’s. This trend of majlis was started by Syeda Zainab a.s, sister of Hussain a.s and then it was followed by their followers and then so on. 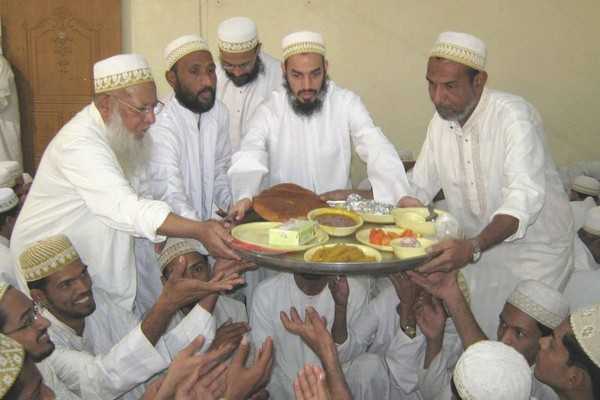 Niyaz means giving on the name of Allah to poor and needy people. Nayaz is included in their faith, in every majlis there is niyazz for the people who were present in that gathering. Many people used to promise Allah that if He helps them in certain task then they will give some niyaz and this concept is known as “Mannat” or “to promise”. Niyaz of 22th of rajab refers to the niyaz of 6th Imam named as Jafar Sadiq a.s and is known as solution of every difficult problem. It is saying of Imam Jafar Sadiq that if anyone who is caught in some problem and there is not any solution then one can promise Imam Jafar that if He helps him then in coming and next year he will give His nayaz.

There are billions and millions of people all around the world who give this niyaz on 22th of Rajab and 22th of rajab is known as “Day of Nayaz”. On the other hand day of Ashura i-e 10th of each muharram there is a lot of nayaz of Imam Hussain all around the wolrd. There are many other nayaz which refers to Hazrat Abbas nayaz, Nayaz of Ali, Nayaz of Imam Hassan, Nayaz of Aehl e bait etc. 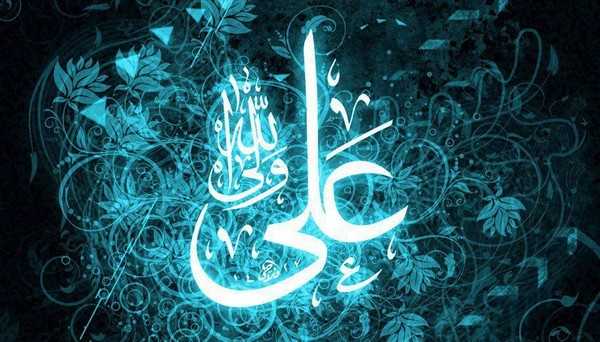 Hazrat Ali (a.s) was the son of Abu Talib, cousin of Holy Prophet Muhammad (P.B.U.H) and son-in-law of Holy Prophet. According to Shiite sect faith on Ali is the main and most important part of their religion. There are three believes and faiths, 1st on Allah Almighty, second on Allah’s Last Prophet Muhammad and then on Ali as helper of Muhammad selected by Allah Almighty. During the last Hajj of Hazrat Muhammad (P.B.U.H), He addressed people and in front of almost 1.25 lack people Holy Prophet had told that after Him Ali will be His custodian or “Khalifa” and would supposed to rule. That event is known as “Ghadeer”. So that Shiite sect has a strong faith on Ali and has a great love and respect for Him.