With the population growing more and more each day, the available space to live in is also decreasing, and keeping this in mind many people are opting to build smaller homes with just enough space to lead a comfortable life. Not only to reside in, small buildings are built for other purposes too. Though there are many small buildings and houses and you may even have seen some of them, there are some buildings that are much smaller than the others. And, thus they find a place in the list of top 10 smallest buildings/houses in the world about which we shall learn right now.

10. The North Queensferry Lighthouse in Scotland 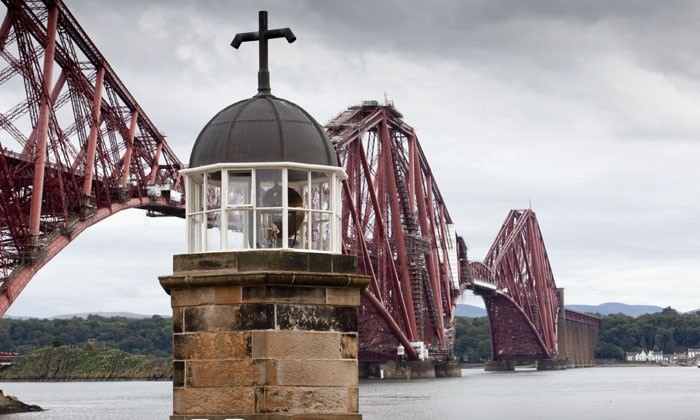 This is one of the smallest buildings in the world. It is a lighthouse in Scotland, which was built in 1817, and is just 11-feet tall. To reach the top of this lighthouse from its entry-level all you need to take is 24 easy steps. Once you reach the upper floor you will discover it is only spacious enough to accommodate 2 people, so you can well imagine how small it is. Though this actually was a functional longhouse that would guide boats when they would travel the waterway. Now it is a tourist attraction that is under the supervision of the North Queensferry Heritage Society.

9. The Riverside House in Japan 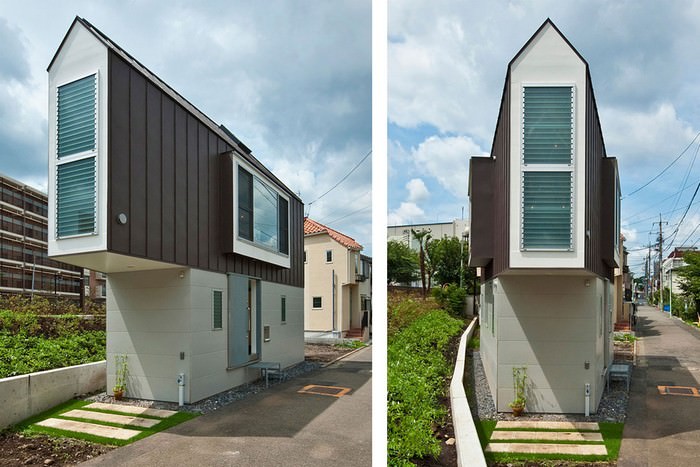 The people of Japan are popular for their skills in micro-innovation. They also have had to overcome the hurdles of having some of the costliest housing in this planet. However, now they are finding new ways to accommodate by turning to the ancient building forms. Kyosho jutaku which means shack living is what the trend now being followed is but in a much bigger way by creating Micro Houses. One such micro house is the Riverside House that has been created by Kengo Kuma, an architect, and has a footprint that is not bigger than a usual UK parking space but still is spacious enough for 2 adults and one child. The building rises above 2 floors and has natural light and offers great comfort and elegance.

8. The Flatiron Building in Portland 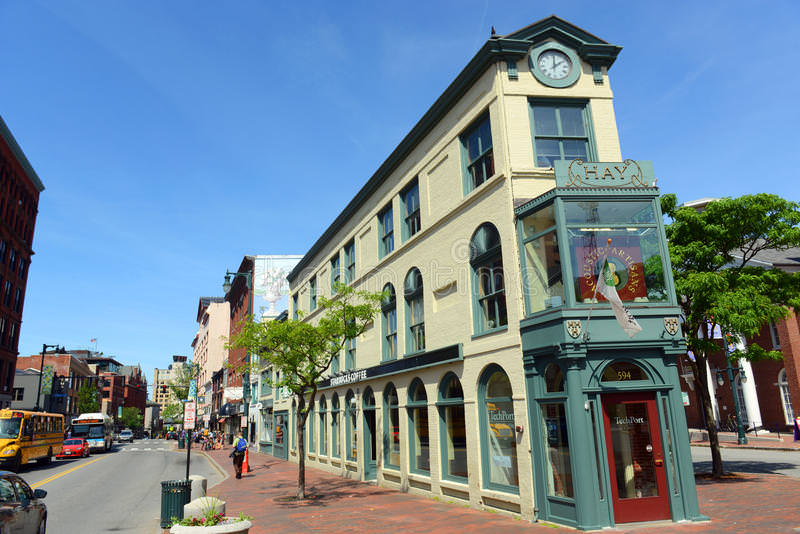 Resembling the shape of the New York City’s Flatiron building, this version is located in downtown Portland. It was constructed in 1916 and takes lesser space than one acre of land. For a long, long time it was considered to be the smallest commercial building in the West Coast. Even today it is a commercial building though it is safeguarded by the National Register of Historic Places. It gets a touchup and a paint job once in every few years so that it looks just like brand new always.

7. The Quay House in Wales 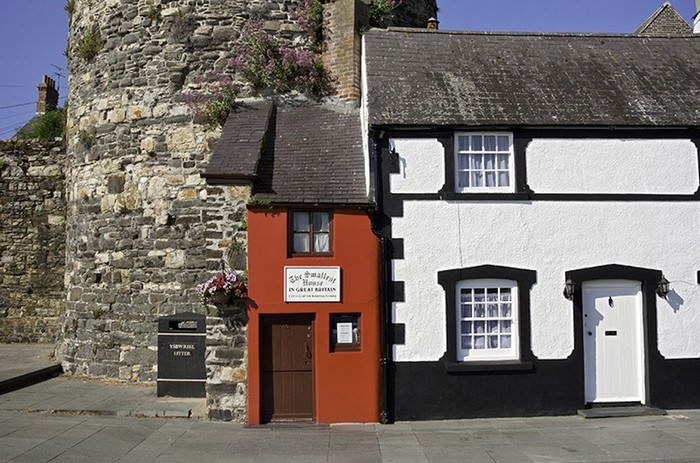 With a floor area of just a little more than 3m X 1.8m and a height of slightly over 3m, the Quay house is the smallest house in Britain and also a popular tourist attraction. Though this house does not have a toilet inside it, it is still a perfect house which once belonged to a fisherman, Robert Jones, who was 6ft 3 inches tall.

See also; Top 10 Most Iconic Buildings Around The World. 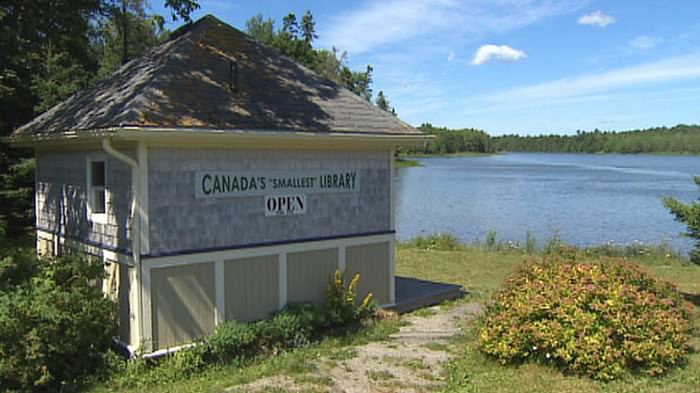 Libraries are something that modern civilization cannot do without and it was also very important in the ancient times. Since the number of readers is growing each day the libraries also are trying to expand to create enough space for the growing numbers. At the same time, some library booths are emerging in those areas that do not have traditional libraries. One such small or so to say the smallest libraries is on the Prince Edward Island in Canada. It measures just 11.5 X 11.5 feet, has nearly 1800 books, and is managed by a father and his daughters.

See also; 10 of The World’s Most Beautiful Libraries.

Not too many houses have a website, but this little cottage-style house with a beautiful octagonal window has a great following ever since it has been up for sale. It measures 14.3m long and 2.1m wide and has a 28.9m2 floor area. Do not let its size mislead you as it does come with every modern convenience. It was built in 1912 and has a contemporary bathroom and kitchen and also a separate bedroom with a nice fold-down bed. It even has a good basement area, high ceilings, and parking space for 2 cars.

4. The Elementary School in Turin

You might have heard of single room classrooms earlier, however, you perhaps have not heard of a single room classroom just for 1 student. Yes, such a school does exist, the Alpette Turin Elementary School, where there is just 1 student in the classroom but there are 15 staff members to assist her. Is it not an amazing teacher-student ratio?

3. The Newby-McMahon Building in Texas 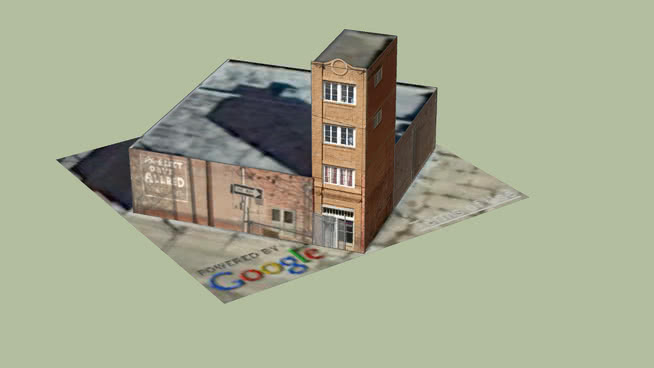 The town of Wichita Falls has become famous for the smallest skyscraper of the world, though it was not intended to be this way. In 1919, J.D. McMahon, the property developer convinced the investors to invest $200,000 so that he could build a skyscraper for them. The investors did not go through the plan properly and instead of a 480-feet majestic building, the end result was a 480 inches structure. By the time this was discovered McMahon had disappeared. When later corruption charges were filed against him it was found he was not guilty, and it was the investors who had not checked the plans properly. 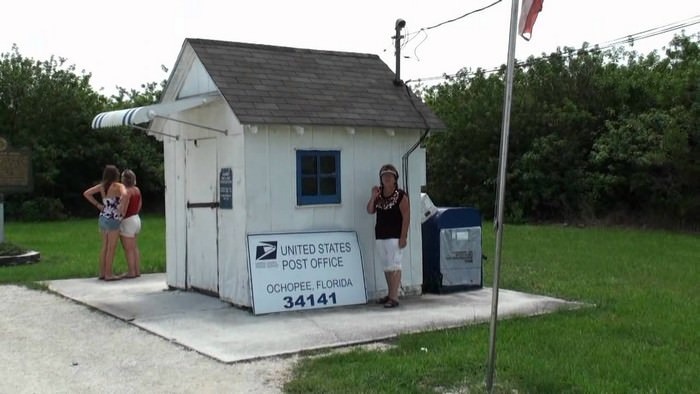 Most of us regularly visit a Post Office. And it generally is two to three times bigger than our homes, and at times even bigger. However, the Ochopee Post Office is different. The original post office and the general store got destroyed in a fire in 1953 and instead of rebuilding the property, a local tomato farm’s pipe shed was taken over and the post office was created. It is fully operational even today and is serving the town of only 11 people.

1. The Gap House in London 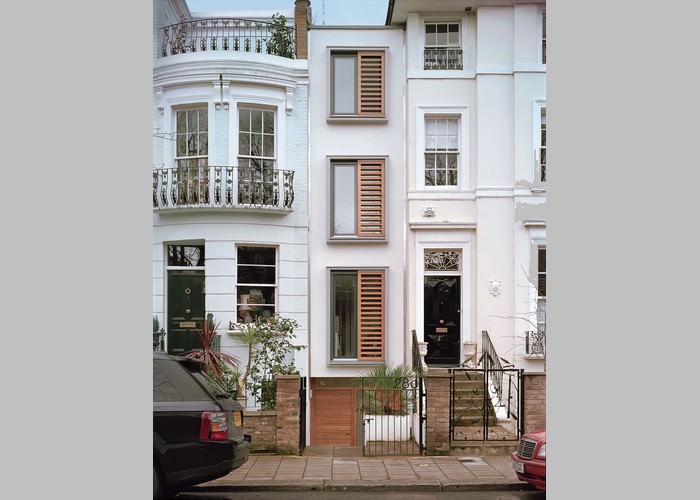 The Gap House, located within a conservation area in fashionable Bayswater. It is situated in a gap between two buildings and within a space of just 23.3 meters. It is a perfect example of sustainable architecture in an urban environment. This 185m2 building was created by architect Pitman Tozer to fit in environmental-friendly technology like maximum insulation, rainwater harvesting, and passive solar gain. This resulted in the energy bills being about 30 percent less compared to the other houses in such a floor space. This house, though one of the smallest, has 4 bedrooms, a central staircase, a rear courtyard, and looks perfect.

Each of these houses/buildings is really small in size. Despite that, they are fully functional, look great, and have attracted the attention of so many people all around the world.