The world owes some of its strangest structures to the masterminds of unconventional architects, who have painted their weird expressions through brick and mortar. The architecture’s field has contributed with many man-made structures and huge buildings to challenge nature’s boundless miracles. Modern architecture has brought many amazing buildings to the world. Quirky shapes, ambitious designs, new materials, and new different styles have come with the modern architecture into construction today. Sky scrapers reaching to the clouds and gigantic structures of metal are common sights in almost all corners of the world. Architects have designed great splendor which then became reality. The purpose of the building is not always seen in its design. Futuristic museums and opera houses have become a usual thing. Here, we list some most amazing, strangest buildings in the world. 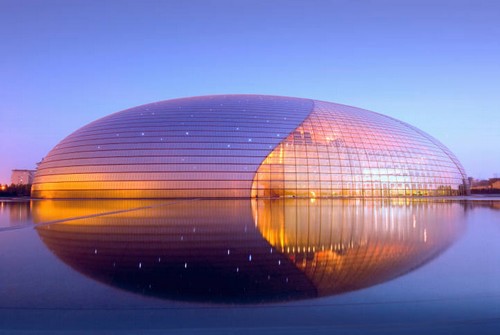 The National Center for the Performing Arts (NCPA), described as The Giant Egg is an arts centre in Beijing, China. The Center internally, contains three major performance halls, seats 5,452.

Taking almost 6 years to complete, it is an ellipsoid dome of titanium and glass. Construction started in December 2001 and the inaugural concert was held in December 2007. The building is surrounded by an artificial lake, seats 5,452 people in three halls and is almost 12,000 m² in size. One of the strangest buildings, it was designed by French architect Paul Andreu. 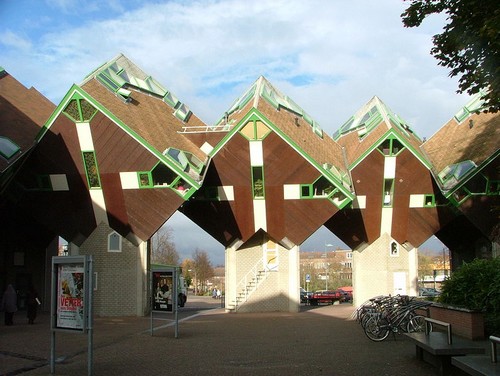 The Cubic houses, the most amazing but strangest buildings in the world. These are a set of innovative houses built in Rotterdam and Helmond in The Netherlands. The design of this building represents a village within a city. It based on the concept of “living as an urban roof”: high density housing with sufficient space on the ground level. It was designed by Dutch architect Piet Blom. They are cubes, situated in different angles over hexagon formed pylons, so they resemble trees, and altogether – make a forest. There are 38 small cubes, and they all are attached one to another. 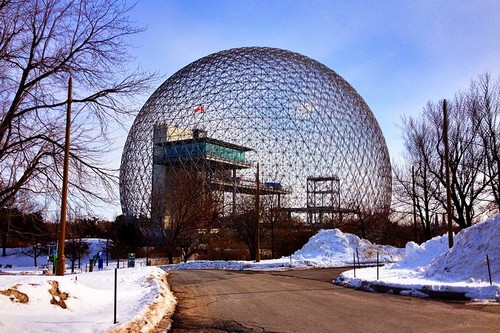 The Biosphère is a museum in Montreal and one of the strangest buildings. This amazing museum dedicated to the environment. The building was purchased by Environment Canada in 1990, and changed its name in 2007 to become an environment museum. It is located at Parc Jean-Drapeau, on Île Sainte-Hélène in the former pavilion of the United States for the 1967 World Fair Expo 67. The structure is used prominently in the original Battlestar Galactica television series episode, “Greetings from Earth”. Scenes for Robert Altman’s post-apocalyptic ice age film Quintet were shot on site as well. 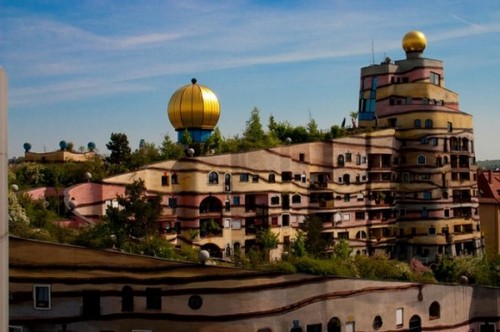 The Forest Spiral (Waldspirale) is a residential building complex in Darmstadt, Germany, built in the 1990s. It was designed by Austrian artist Friedensreich Hundertwasser, planned and implemented by architect Heinz M. Springmann, and constructed by the Bauverein Darmstadt company. The building was completed in 2000. It is a really amazing building with a green roof, resembling a spiral. The colours, the movement of the spiral the whole design is very stylish and warm. 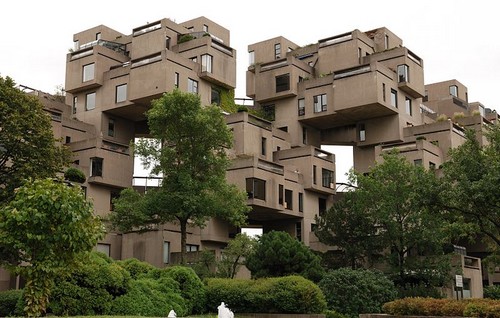 Habitat 67 is a model community and housing complex in Montreal, Canada, designed by Israeli–Canadian architect Moshe Safdie. It is located at 2600 Avenue Pierre-Dupuy on the Marc-Drouin Quay next to the Saint Lawrence River. Habitat 67 is widely considered an architectural landmark and one of the most recognizable and significant buildings in both Montreal and Canada. It resembles a very interesting arrangement of cubes that kids play with. It is pretty interesting how it was designed – it looks so original and the same time is a building completely stable and comfortable for living. 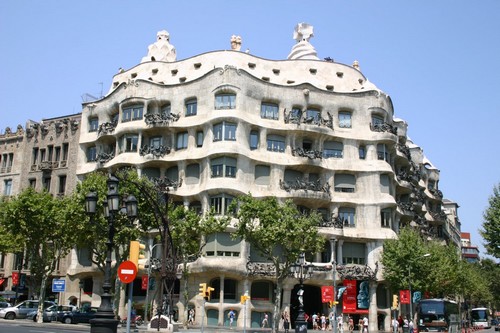 Also known as Casa Mila is a building designed by the Catalan architect Antoni Gaudí and built during the years 1906–1912. It is situated in the Eixample district of Barcelona, Catalonia, Spain. The story of the house is pretty interesting. The house was designed by Antoni Gaudí and built for a married couple. It is an extraordinary but stylish building considered to be highly unconventional – there is not even one straight line!

Casa Mila is a modernist building. In addition, it was the last private residence designed by architect Antoni Gaudí. It was a controversial design at the time for the bold forms of the undulating stone facade and wrought iron decoration of the balconies and windows, designed largely by Josep Maria Jujol, who also created some of the plaster ceilings. Casa Mila was declared a World Heritage site by UNESCO. Visitors can go to the top floor, the attic and roof and have a close look at this masterpiece. 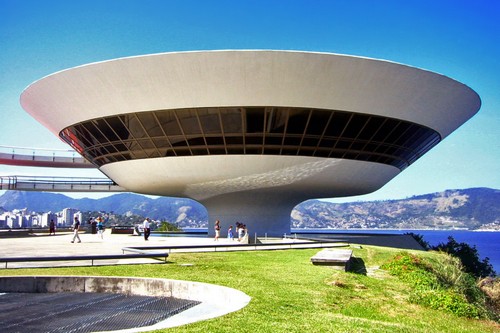 The Niterói Contemporary Art Museum is situated in the city of Niterói, Rio de Janeiro, Brazil. It is one of the city’s main landmarks. In addition, it is the significant building for the city. It looks pretty much like coming from another world, or from the outer space. This Museum was built in 1996, designed by Oscar Niemey, who created it with the help of Bruno Contarini. The building is 16 meters high and the diameter of its cupola is 50 meters. The amazing building is gathering admiration from all – architects and ordinary people, who like the uncommon and original. 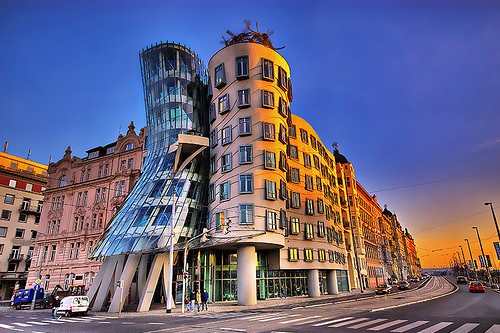 The Dancing House or “Fred and Ginger” is the nickname given to the Nationale-Nederlanden building in Prague, Czech Republic. This is an amazing masterpiece of architecture, which has its own romantic charm. There is something so sweet in the way the buildings hug each other for a dance! It was designed by Vlado Milunic in cooperation with Frank Gehry. Although, the design was controversial at the time. It was considered as very non-traditional, but with the passage of time became a center of cultural activity. It is a stylish and amazing building, which became a symbol of the city. 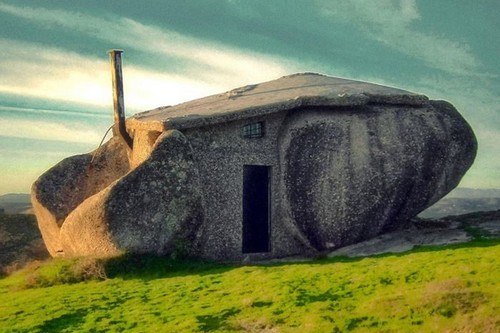 The stone house in Portugal really resembles the famous home of the Flintstones. Constructed between two giant stones and linked with a concrete mix, the house is rumored to be inspired by the popular American Flintstones cartoon. Like most contemporary homes, it has a front door, roof, and selection of windows – while the huge spherical boulder on the uphill side of the house and scoop-shaped end give it that prehistoric feel. This unusual house’s design attracts thousands of tourists each year.

Also known as Stone Castle, it is an architectural monument. The building has become a growing tourist attraction because of its unusual design. Due to its integration into the surrounding nature, it is one of the most beautiful site. 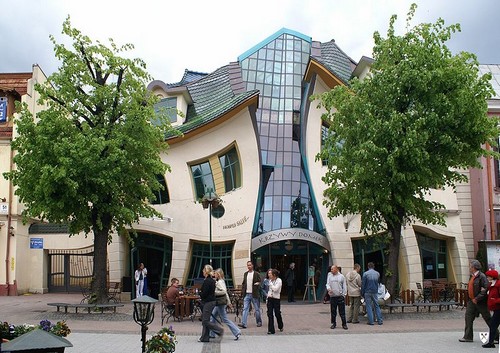 Shopping center in downtown Sopot, the Crooked House is currently considered an architectural marvel. The Krzywy Domek (in English as the Crooked House) is an irregularly-shaped building in Sopot, Poland. Crooked House was built in 2004. It is approximately 4,000 square meters in size. And, it is part of the Rezydent shopping center. It was designed by Szotyńscy & Zaleski who were inspired by the fairytale illustrations and drawings of Jan Marcin Szancer and Per Dahlberg to create this masterpiece. It has been designed keeping the architecture of the surrounding buildings and looks like a part of them, but gives the impression that it is molten of exhaustion. This building is a popular tourist spot with some restaurants, bars and shops. It has become the most photographed building in Poland due to its unique impression.