Our mother Earth provides the platform for the most amazing of visual treats. From light shows to fireworks to decoration of places, nature provides it all. Thousands of tourists flock every year to get the firsthand experience of the serenity of nature. As a result, we look at the top 10 works of nature that astound visitors ever year. These are world’s most amazing natural phenomenon. 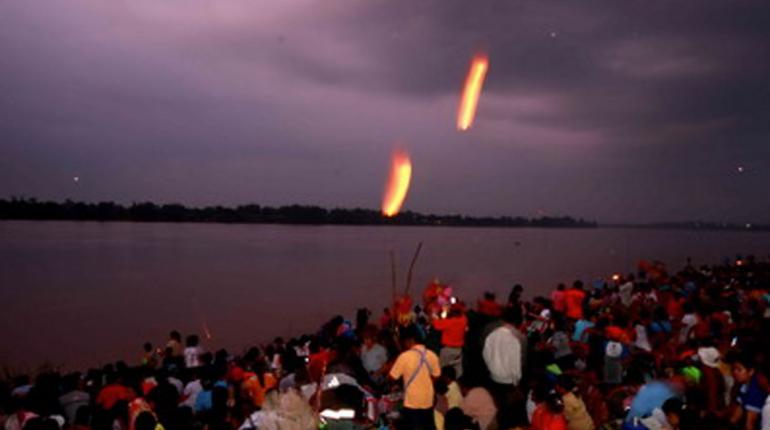 What would you do if you were walking along a tropical river at night and it suddenly began burping up egg-sized balls of red light? That’s exactly what happens every year in October along the Mekong River (Laos). This phenomenon is known as Naga Fireballs. These ghost fireballs were one of the many secrets that science could not explain up until 2014. It has since been confirmed by the Science Ministry as a natural occurrence which is caused by flammable phosphine gas.

The phenomenon of the Naga fireballs has not been very well received in the ancient times. Some say that the Wat Lunag temple in Phon Phisai contain old written records mentioning them. Ghostly fireballs can be seen in the late October-early November period with the end of the monsoons leaving the Mekong River replenished with lots of water. Balls rise out from different parts of the river, but they mostly arise from a single spot.

It actually occurs twice a year- during the solar equinoxes- spring and fall (March 20 and September 23 respectively). Late afternoon on fall and spring equinoxes, the sun projects an undulating pattern of light on the northern part of the structure providing us with a pattern that evokes the appearance of a massive serpent sliding down the structure. The reason for the illumination is due to the angle of the sun rays and the edge of the steps that define the Itza’s construction.

Rising on the northern platform of the Chichen Itza is the temple of Kukulkan (a Maya feathered serpent deity) which is also known as “El Castillo” (The Castle). El Castillo’s design is thought to relate the Mayan calendar. Each of the four sides have 91 steps each. With the top platform being counted as a step it adds up to 365 steps: a step for each day of the year. 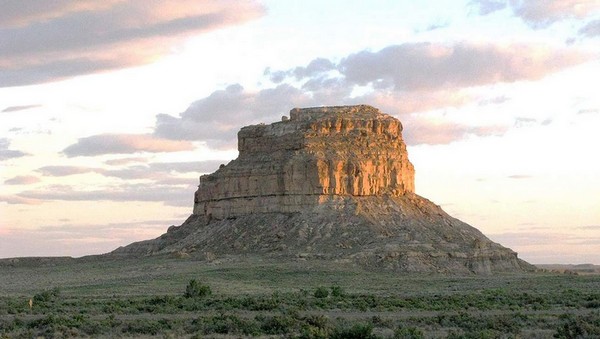 In 1977 when researcher Anna Sofaer visited what is now the state of New Mexico in the Southwestern part of USA to explore rock art, she would not be able to think what was in store for her. While exploring the area known as Chaco Canyon, she witnessed three stone slabs leaning against the cliff and a couple of spiral petroglyphs. Suspecting the rock arrangements she returned to the site at different times throughout the year.

What she observed was astonishing! On the summer solstice, a single silver of sunlight- which she dubbed as the ‘sun dagger’ appeared near the top of the larger spiral “slicing” its way down to the center, thereby cutting the spiral in half. Again on winter solstice, two daggers of light appeared for about an hour, during which they exactly framed the large spiral. Although the purpose of such a light show is not clear, but it surely points to the awareness of and appreciation for the sun the indigenous people living in the historic times had.

See Also; 10 Incredible Canyons or Gorges In The World. 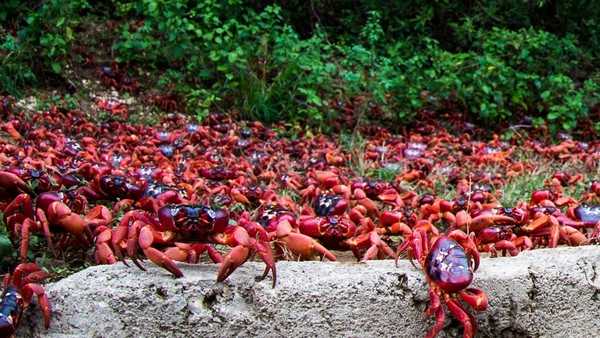 Most species have to migrate to breed and to protect themselves from the extreme weathers. That is exactly what the Christmas Island Red crabs do. The little critters make their way from the forest to the coast to lay eggs (Millions of them!). It is the beginning of the wet season which stimulates their annual migration. Actually it’s the different phases of the moon which affect their timing. The females release their eggs at the turn of the high tide during the last quarter of the moon.

What is so sensational about this migration is its visual treat. It looks as if the island has been covered by a red carpet and is one of the sceneries of the year. It is so incredible that thousands of people visit the island to view the phenomenon. The bright display of such wonder force most of the roads on the island to be closed. These crabs are protected by law as the visitors are requested to walk on foot rather than use vehicles.

#6- Queen of the Night-Selenicereus grandiflorus 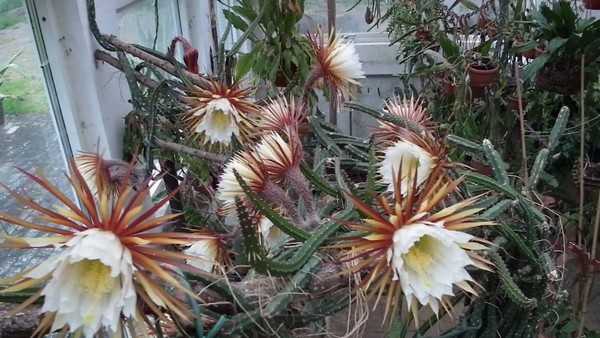 For years, the night-blooming Selenicereus grandiflorus has mesmerized anyone lucky enough to be up when its huge white fragrant blossoms open in the dark. These nocturnal bloomers are members of the cactus family. But the sad fact of the matter is it blooms only for a single night and shrivels up shortly thereafter.

The Selenicereus can reach up to a height of 10 meters or more. The flower bud which appears as a tiny white pearl inside of the leaves swells as the days pass, until one evening, before our very eyes it opens up. It fills the night with an unforgettable fragrance- smelling something like vanilla. The flower stays open all night, waiting to be pollinated by the moths before withering back to the skeleton.

Veteran’s day (no not the same as Memorial Day!) celebrates the service of all US military veterans. Celebrated as an official public holiday in the United States, Veteran’s day takes place at 11th November every year. What’s fascinating that each year on 11th of the 11th month at 11:11 A.M in Arizona the sun’s rays pass through the ellipses of the five pillars to form a perfect solar spotlight over a mosaic of the Great Seal of the United States of America. A number of people gather near the monument to view this amazing phenomenon orchestrated by the sun.

The Anthem Veterans Memorial, located in Anthem, Arizona, is a monument dedicated to all US military veterans. The memorial, designed by Renee Palmer-Jones (an Anthem resident) consist of five pillar marbles which symbolize the five branches of US Military- Army, Marine Corps, Navy, Air Force and Coast Guard. 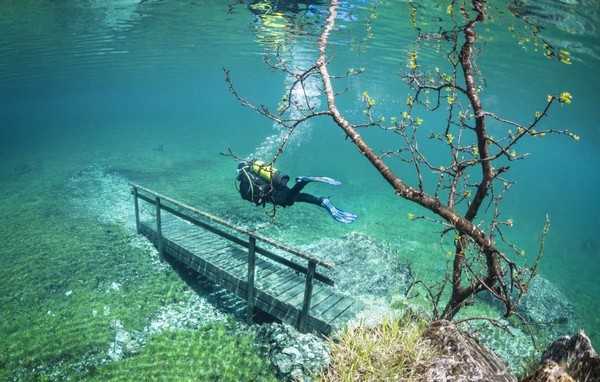 Set among the snowcapped Karst Mountains of Austria, the Gruner See or more famously known as the Green Lake is a worthy tourist spot. After all the water is only a meter deep. However, an unusual natural phenomenon caused by the melting of the snowcapped Hochschwab Mountains turns the lovely park into a massive pool with all of its footpaths and benches submerging into the underwater world.

Such is nature’s beauty- it literally changes with the seasons. During the winter the lake is only three to six feet deep and is surrounded by a scenic parkland that is perfect for hiking and exploring. But cometh the spring the ice and snow from the surrounding hills start to melt filling the lake up to a maximum depth of 40 feet. As a result this natural beauty becomes a hotspot for the water sport of scuba diving.

See Also; 10 Most Beautiful Crater Lakes in the World. 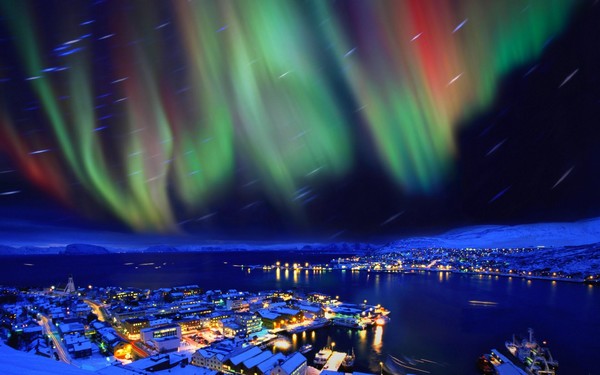 Unpredictable yet breathtaking, the Aurora Borealis or the Northern lights are the nature’s most sumptuous light shows. When the spectacle is in full flow, the sky is ablaze with a range of cosmic greens, reds and yellows. This natural phenomenon can be seen in the northernmost regions of the world including the likes of Norway, Iceland, Greenland and Alaska.

Most Auroras occur in a band known as the auroral zone. The Aurora Borealis occurs when highly charged electrons from the solar wind interact with the elements of the Earth’s atmosphere. Solar winds stream away from the Sun following lines of magnetic force generated by the Earth’s core. As the electrons enter the Ionosphere, they encounter atoms of Oxygen and Nitrogen. The color of the aurora depends on which atom has been struck and at what altitude.

#2- The blooming of Tisza, Hungary 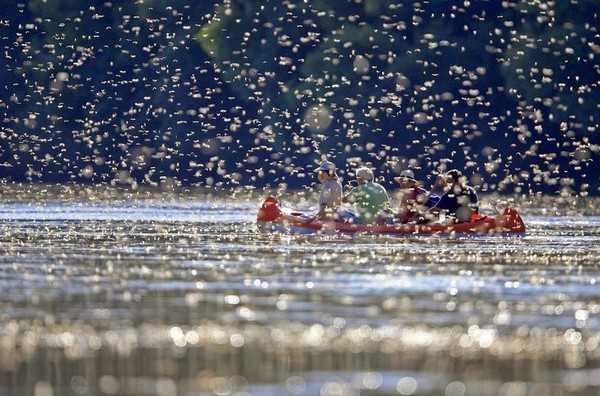 Near the Tisza river in Hungary and Serbia, people have to deal with a swarm of small insects every year. The Palingenia longicauda also known as the Tisza mayfly, have a strange life during which they remain underground as larvae for 3 years. After fully maturing, these small insects surface ready to mate. But here is the strange thing-they have only three hours to do so before they die. This unique nature’s phenomenon attracts hundreds of visitors every June to banks of the river.

After three years of slumber, the Tisza mayflies are ready to create the next generation of larvae and then succumb to their deaths. Due to synchronized hatching, all mayflies emerge at once, mating and plaguing the surrounding towns by forming a dense cloud. The air gets so thick with insects that it almost looks like snowfall.

See Also; 10 of The Coldest Places on Earth Where People Actually Live. 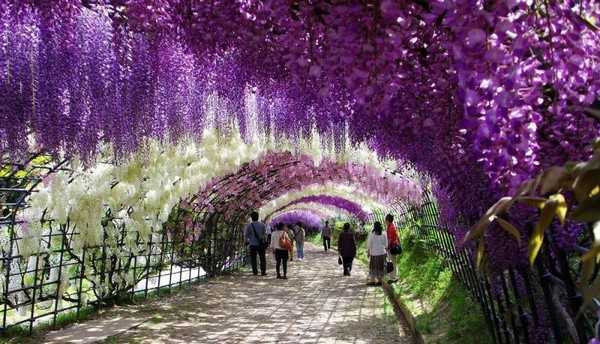 It is virtually impossible to walk through the Wisteria tunnel at the Kawachi Fuji gardens without remembering those fairytales and stories of princesses riding on horse walking alongside us. The pastel colored passageway is truly a fairytale setting, a place one would never want to leave. The enchanting tunnel which explodes with color is due to the flowering Japanese wisteria (also known as Fuji in Japan) which hang overhead. As a result the mixture of different colors makes it an amazing place to walk through.

See Also; Magical Tree Tunnels You Should Definitely Take A Walk Through.

The main features include wisteria vines planted over a 110 meter long tunnel, two domes and a large trellis the size of several tennis courts. A member of the pea family, wisteria is an ornamental vine, wildly popular for its hanging flowers and winding branches. The best time to visit the tunnel is from late April to mid-May. Visiting the place at other times may lead to the disappointment of disheartening mass of lifeless, twisted branches.