Who does not like laying lazily on a reclining chair in a breezy warm summer night and gazing at the dark night sky? After all staring at the sky is the closest we can get to nature from our digitalised modern homes mushrooming in the congested cities. ‘Sky’ is the common interest shared by the astronomers, the scientists, the weather enthusiasts, the photographers, the entire literary world and even the astrologers. Here is the list of the 10 places to watch beautiful night sky. 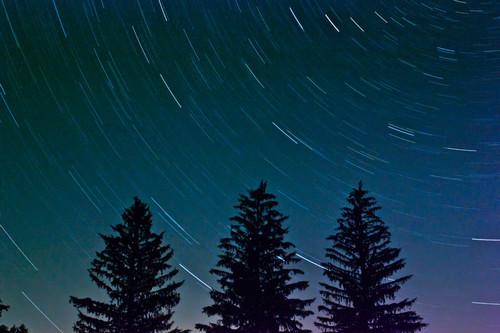 When lagging developing countries victimised by economic constraints and civil war are failing to provide electricity to several remote villages the developed countries are waging a different war. It is a war against ‘artificial light pollution’. This laid the foundation of ‘dark sky reserve’ zones. Cherry Springs Park is one such area in the East Coast of U.S.A. The night sky here flaunts 10,000 stars which are visible to the naked eye. The most awe-inspiring fact is that the Milky Way is so bright here that it can cast a shadow! 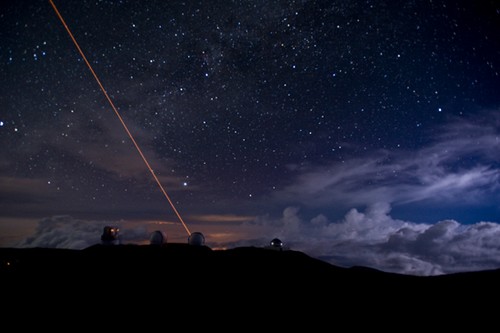 The isolated island of Hawaii standing tall atop the Pacific Ocean provides the perfect night sky cover. The place is considered a hub of the astronomical watchdogs and houses the most advanced astronomical observatory. Mauna Kea is the highest point of Hawaii. The locals rightly believe their Gods to be residing in the summit of the active volcano underneath this starry heaven. Watch the river of light flow over your head as you camp in the seclusion of nature. 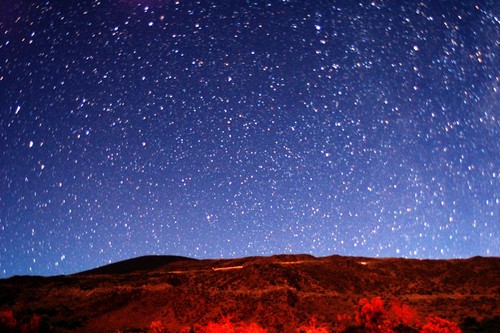 African deserts, infamous for the glaring sun and soaring temperatures which make the land uninhabitable, can make you swoon all over its beauty once the sun goes down. The lack of trees and man-made sentinels provide an unobstructed 360 degree view of the entire sky. Lack of crowd ensures the calm nature of the place. Visitors who experienced this wonderful spectacle claims the stars don’t twinkle but shine here. Hard to imagine but it is true! 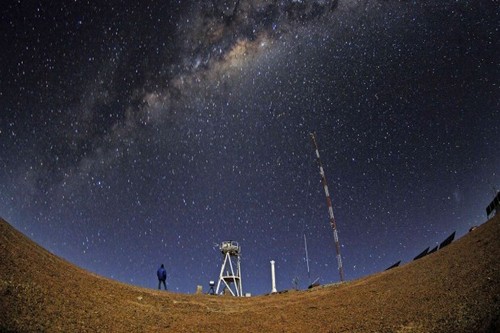 Are you a Stephen Hawking fan? Do you wonder about the history of time? Does the concept of watching a star which has been dead millions of years ago and exist no more baffles you? If your answer is yes you ought to take this ‘astro-tourism’ tour in the driest desert of the Earth. Peep through the high powered telescope in this astro-land and watch glittering galaxies several light years away or catch a glimpse of the distant nebulae swirl in the universe with your naked eye. The Cerro Paranal, the ALMA are some of the observatories on the desert. The landscape with the glittery sky paints a scene straight of the outer space! 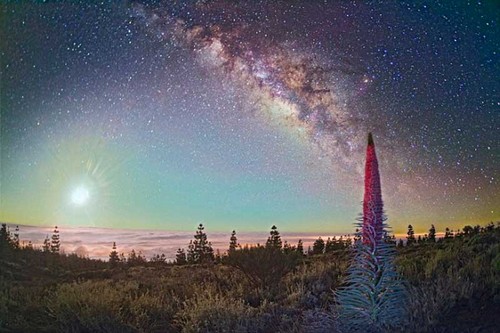 While we the mere mortals are busy burning all our hard earned money in polluting the environment by bursting firecrackers the universe celebrates its happiness with its indigenous fireworks, the meteor shower. The shooting stars are a common sight in Tenerife of Canary Islands. The blissfully clear sky of the unpolluted Island is also recognised by the Dark Sky Preserves. Guided starlight excursions are conducted in the island. The star buffs have more reason to love the place as it hosts the Starmus Festival once in every two years. 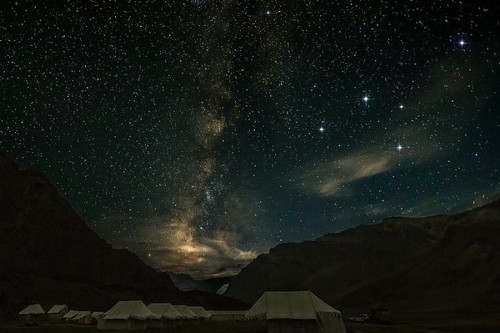 Tucked away in the remote Himalayan abyss lies this tiny, quiet splendour of nature. Far away from any possibility of light pollution the magnificently clear sky gives space for ample opportunities of star gazing. The view of the Milky Way will make you wonder how mysteriously large and vast the universe is. The process of expansion that started with the Big Bang and still continuing is making the humans more and more tiny and negligible. Sounds philosophical right? Such is the rhythm of Spiti Valley. It can turn an average human into a philosopher! 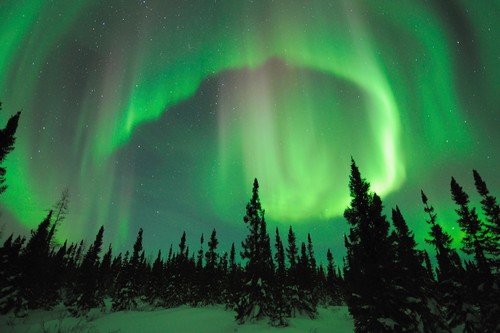 Undoubtedly one of the most dramatic phenomenon is formation of the moving paintbrush strokes of varied colours in the gigantic canvas of the sky. The world calls it the Aurora. When the electrically charged particles from space accelerate along magnetic field lines into the upper atmosphere they collide with the gas atoms causing the atoms to give out energy in the form of light. Oxygen emits greenish yellow light whereas nitrogen is responsible for the blue tinge. Aurora Borealis occurs with high frequency in Fairbanks. The crystal clear sky here makes sure you get the best visual treat. 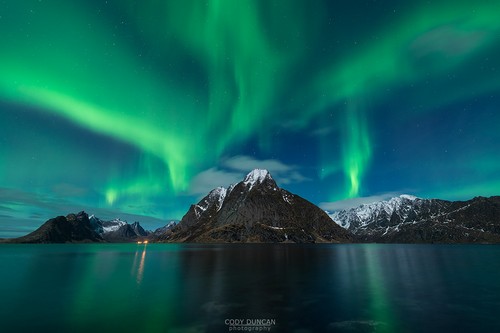 The Northern part of Norway lying within the Arctic circle is best for viewing this magical play of colours. On its con side Lofoten Island is characterized by stormy skies but on its pro side Lofoten is endowed with a comfortable temperature which would enable you to stand for more hours outdoor in the dark waiting for Aurora Borealis to happen. You can never have enough of the dancing hues of red, purple, green and yellow. 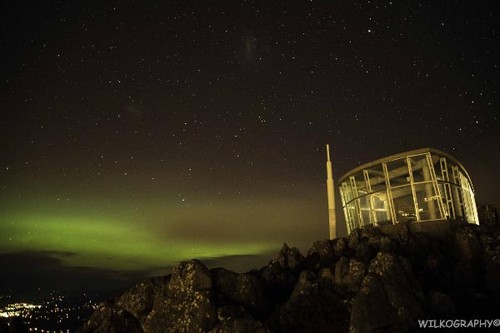 The Aurora Australis or the southern lights is the identical twin of its northern counterpart the Aurora Borealis. Despite being equals there exists a remarkable difference between the popularity of the two. The lack of habitable land to view the southern lights is the main reason behind this biased attitude of the world. Only the ultimate remote continent of Antarctica can stage a full form Aurora Australis show with high frequency. However Tasmania provides an accessible substitute for viewing the dancing hues. The southern parts of the island with minimum artificial light and a clear weather are often exposed to this fantastic spectacle. 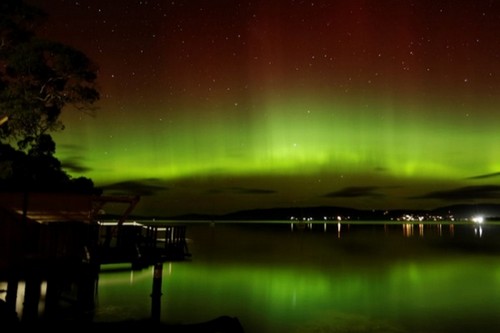 The Maori people of New Zealand have a different name for the island. Stewart Island is called Rakiura by the Maoris which mean ‘Glowing Skies’. The isolated setting of the island lays the basic foundation for observing the sky. An absence of congested human settlement results in lack of light pollution which is an essential requirement to watch the Aurora with all its glory. The weather of the region is unpredictable so catching the southern lights is not a cakewalk. Winter is the right time for viewing the Aurora as the polar summer is littered with daylight which obscures the solar flare.