English is third most commonly spoken language in the world. For some, it is the native language, for many it is the first language despite having a different mother- language, while there are many who use it as their second language. Every day, people read, write or speak in English.

English is a language with many forms: it can be curt and crisp, it can also be sweet and romantic. In fact, the treasure chest of English literature is filled with invaluable gems. The contribution of William Shakespeare in this regard is unquestionable. But, how many English-knowing people are aware that many of the phrases and expressions that they use on a regular basis have actually been coined by the Bard himself? 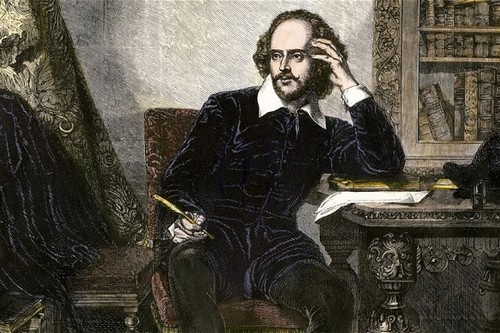 Here is a list of 10 such phrases and expressions that were first used by Shakespeare:

Shakespeare used this phrase to bring out the meaning that is prevalent currently. It was first used in ‘The Tempest’:

Full fathom five thy father lies;
Of his bones are coral made;
Those are pearls that were his eyes:
Nothing of him that doth fade
But doth suffer a sea-change
Into something rich and strange.

2- All/ the four corners of the world

Meaning: Many different parts of the world (Cambridge)

Shakespeare first used the phrase, ‘all corners of the world’, in his play, Cymbeline:

“What shall I need to draw my sword? the paper
Hath cut her throat already. No, ’tis slander,
Whose edge is sharper than the sword, whose tongue
Outvenoms all the worms of Nile, whose breath
Rides on the posting winds and doth belie
All corners of the world: kings, queens and states,
Maids, matrons, nay, the secrets of the grave
This viperous slander enters. What cheer, madam?”

Shakespeare has, in his writings, used many ‘cold’ similes, and this one is definitely the most used. It first appeared in Henry V:

Though the meaning of the phrase has currently come to include the untidy appearance of something or someone, Shakespeare meant a regrettable condition, when he first used it in Macbeth:

“MACBETH:
This is a sorry sight.
[Looking on his hands]

LADY MACBETH:
A foolish thought, to say a sorry sight.”

Shakespeare first coined this phrase to denote jealousy in ‘Merchant of Venice’:

How all the other passions fleet to air,
As doubtful thoughts, and rash-embraced despair,
And shuddering fear, and green-eyed jealousy! O love,
Be moderate; allay thy ecstasy,
In measure rein thy joy; scant this excess.

He has also used it later in his other works, such as Othello.

Meaning: (To the) full extent of one’s desires (Oxford)

This phrase appeared for the first time in print in Shakespeare’s ‘Henry VI, Part II’:

“Her grace in Speech, Makes me from Wondring, fall to Weeping ioyes, Such is the Fulnesse of my hearts content.”

He has also used it in ‘Merchant of Venice’, and a letter to the Earl of Southampton as a dedication of his poem, ‘Venus and Adonis’.

7- Wear your heart on your sleeves

Meaning: To make your feelings obvious to other people (Macmillan)

This was used for the first time by Shakespeare, in his tragedy, ‘Othello’:

“For when my outward action doth demonstrate
The native act and figure of my heart
In compliment extern, ’tis not long after
But I will wear my heart upon my sleeve
For daws to peck at: I am not what I am.”

This expression, often used in modern English, was first used by Shakespeare in ‘Othello’:

“I am one, sir, that comes to tell you your daughter and the Moor are now making the beast with two backs.”

Though Shakespeare might have been the first to use this in English, a French version of it appeared in Francois Rabelais’ novels La vie de Gargantua et de Pantagruel, long before ‘Othello’ was published. But, the English translation of the French novel was not written or published until almost a century after ‘Othello’.

9- Out of the jaws of death

Meaning: Saved from an unpleasant situation or great danger

The earliest citation of this phrase has been found to be in Shakespeare’s ‘Twelfth Night’:

“Let me speak a little. This youth that you see here
I snatch’d one half out of the jaws of death,
Relieved him with such sanctity of love,
And to his image, which methought did promise
Most venerable worth, did I devotion.”

10- All that glitters (glisters) is not gold

Meaning: The attractive external appearance of something is not a reliable indication of its true nature.

Although several expressions had been used in earlier texts to denote the meaning that superficial shine is not necessarily the signal of high value, Shakespeare was the first to put it into a single-line expression. The original expression, as used in ‘The Merchant of Venice’, was “All that glisters is not gold.”:

“All that glisters is not gold;
Often have you heard that told:
Many a man his life hath sold
But my outside to behold:
Gilded tombs do worms enfold…”

In the modern rendition of the expression, which has taken the form of a proverb, the word, ’glisters’ is replaced by ‘glitters’.

The list of words and expressions coined by William Shakespeare continues. Every user of the English language owes all these phrases to the great Bard. Without Shakespeare and his coinages, one can only imagine how bland the language would have been.