When one talks of slums, ‘Dharavi’ in Mumbai (India), very urgently pops into mind, thanks to Danny Boyle’s 2008 film ‘Slumdog Millionaire’. But slums are not always a slogging under-developed country’s production. There are slums teeming with awfully poor people, even in the most developed of nations. Don’t believe me? Let’s take a quick look into 10 of the most horrid slums found in comparatively well-off places: 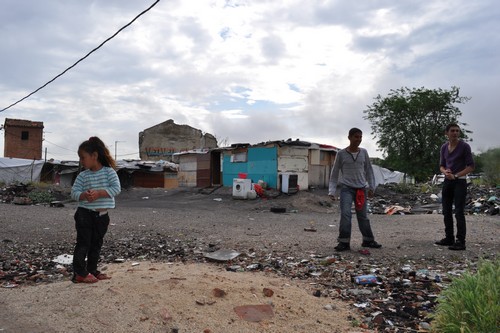 Canada Real homes thirty thousand lowlife people living in shanties near the Madrid’s garbage incineration site. Often, they are seen scrounging the garbage for reusable goods. Stretching over a good 16 kilometres of land, Canada Real also homes the Spanish shanty-town-drug clan. In the whole miserable town there’s only one paved road known as ‘shooting gallery’ where illegal goods are bought and sold. The situation there is quiet hopeless as the government refuse to help them or even recognize them. Attempts have been made to demolish the town, but unable to find new residence the people again and again come back to the area and live among the ruins. In such a hostile situation and averseness from the government, charitable organisations willing to help find it difficult to make any successful impact. 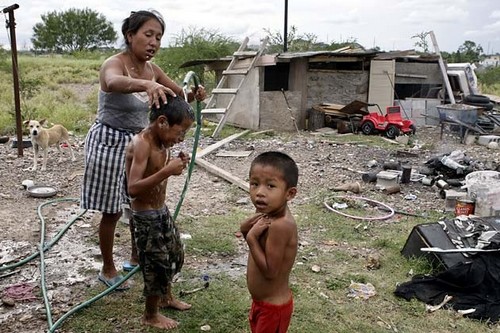 An estimated 500,000 people home the Texas-Mexico border collectively known as Colonias. They are primarily Hispanic people – i.e. American’s whose first language is Spanish – which is due to the fact that many of these people had sneaked into America in search of a better life, while many are born in the shantytown and have never set foot outside. Therefore most of the people living in this community are undocumented so the official headcount is not possible but, to be sure, the population is bulging. Residents of Colonias earn their living through meagre farm and construction labouring. The living standard here is, quite obviously, most horrific. Most people are forced to reside without electricity and without running water. The American government has taken up responsibilities for protecting the community but the task is too overwhelmingly large to provide any instant change. 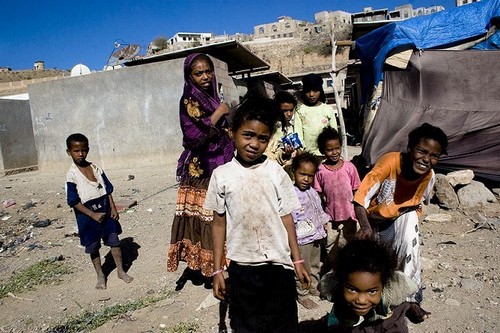 Situated close to the capital city of Yemen, Mahwa Aser is one of the most life-threatening places to live in. Mahwa Aser is home to 17,000 ‘Akhdam’ people – descendants of the African ancestors – and have been practically barred from all rights and recognition by the government, among which are their right to vote. Of course there’s no real infrastructure in the place, no electricity or clean running water, no sewage system. Begging or cleaning streets are the available day jobs. Unfortunately the Yemen government have never really shown any interest in improving the living condition of its unrecognised citizens, so during the ‘Arab Spring’, the Akhdam people demonstrated their wrath and held consecutive strikes (mainly by street cleaner) that ended in the government making a few promises. Now the government is helping build homes in the area.

7. City of The Dead in Cairo 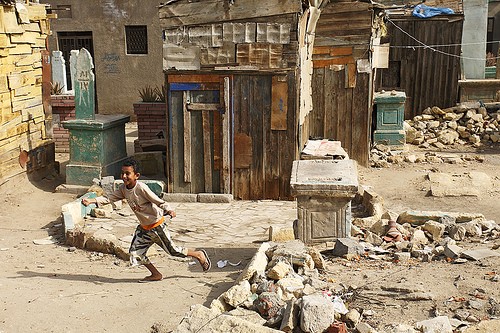 In Cairo, as many as 5,00,000 people are known to live among their dead ancestors. In an overcrowded city teeming with 18 million residents, many are forced to build living quarters among the tombs of their ancestors known as the “City of the Dead.” The City of Dead stretches across a land of 6.5 km that holds at least million tombs. In this modern slum, most houses have facilities like kitchen, gardens, courtyards et al but are unsafe places to reside in. With no electricity and unpaved, winding confusing streets, crime rates are soaring. In this jungle of ruins, the police can do little to provide security to these slum dwellers. In recent years, Egyptian government have been discussing relocation but looking at the ever soaring price of properties, relocation is not going to happen any time soon. Never the less, the government’s efforts to provide clean running water and electricity has been commendable. 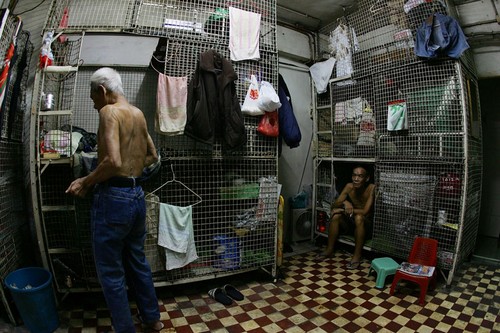 Deemed as one of the fastest growing economies in the world yet the plight of some home dwellers are worse now than it was 25 years ago. Some people actually reside in piled up cages in China’s heart city – Hong Kong. Some have been living here for many years, with visibly no security from rain, heat, noise, pollution and absolutely no privacy at all. Not just this, there are coffin slums as well, where people reside in spaces hollowed out of the wall. It is extremely unfortunate that in booming economy some manage to hoard up million times more than they require while others are left in the most terrible condition throughout their whole life. A survey estimated, twenty thousand people living in this terrible condition in the city of Hong Kong.

Vancouver is a port city and the third largest city in British Columbia. Ironically, Vancouver is said to be one of the best cities to reside in. However there is a dark corner in the city – the downtown eastside is infested with drug addicts, prostitutes, illness, murder houses, HIV infected men and women. There is a thriving black market named Hastings Street Market, selling stolen goods, open under the sky. Hepatitis C is a common disease found among the residents there. In the past, the government had made recurring efforts to improve the place but has failed.

Interesting stuffs: There’s an absolutely marvelous documentary named ‘Pain and Wastings’ (2008) that lays bare the terrible condition in which the people are forced to live at downtown eastside. 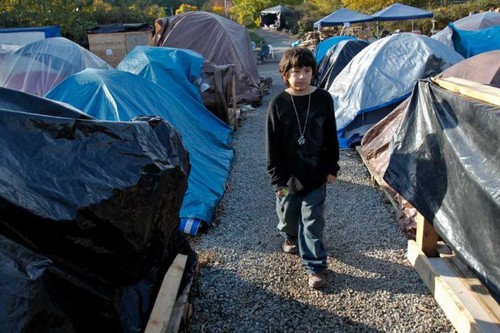 Hundreds of homeless people flock to Seattle, build a tent for the night and disappeared in the morning. But there are some over 250 people who has permanently settled inside their tents, building a community that can be called ‘tent city’, in an area known as Nickelsville. These permanent or temporary dwellers, gaze at a hopeless road ahead with no job, no money and visibly no future prospect. In the past, the government had constructed cheap housing units known as Single Room Occupancy (SRO) which, during the 1970’s had to be closed down due to recurrent fire break outs. Since then, the people thrown into the streets have been living in tent houses under constant fear of being arrested on charges of illegal camping. Every once in a while, generous American citizen offer donation in various kinds, to the poor residents of tent city which, however generous, is not adequate to hurl a mass of people out of poverty. 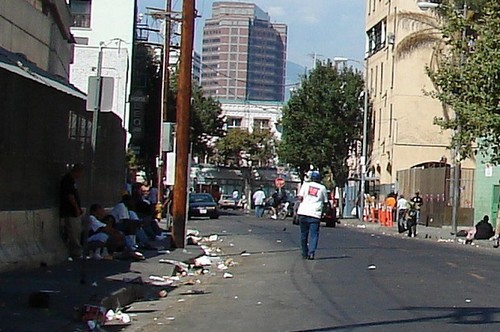 Like many other cities in this list, Hollywood also has its share of dark corners. These dark places started popping up with the boom of the film industry. Later when pornography established itself into a business, thousand flocked into this dream city aiming to earn a fortune. Never-the-less many hopes got dashed, and slums cropped up inhabited by failed dreamers. Consequently crimes, drugs abuse and prostitution rose. The government has, time and again, tried rising to the challenge, ordering crack down on such unruly places but as an official says, ‘You get rid of one, and another pops up.’ For now, Hollywood slums are in quiet a hopeless scenario. 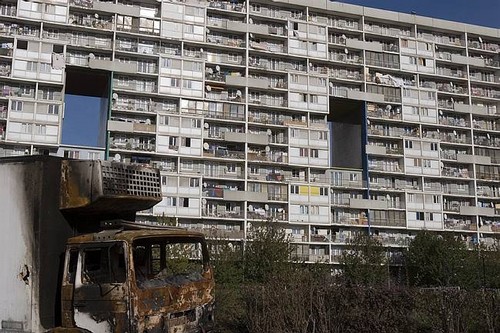 A few kilometres outside the city of romance there is an area, so indulged with crime that the place has been marked off as restricted to trespassers. The lager community of La Courneuve started growing in the last century due to the influx of immigrants from the Middle East and Roma. Initially the authority did not see this as a threat. By the time the matter began tossing into the consciousness of the government, the place was already swarming with people and their many number of children. Jobs are scarce and racism is rampant due to which, any hope of emerging from the dark alleys are dim. The dwellers are basically unrecognised citizen who more than often steep into crime. The repulsive living condition has, in the past, prompted them to cause riots but with little success. 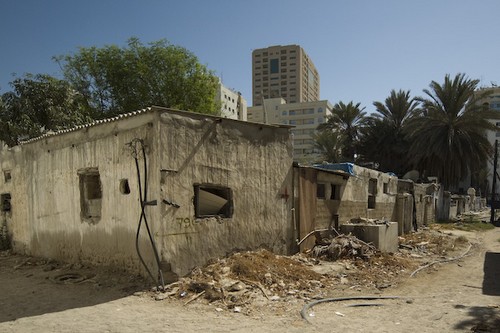 Dubai is like a giant melting pot with people from all over the globe travelling to the city in search of work and money. Almost 99 % of the population are non-natives. Next to the most expensive infrastructures one can easily view a slum seething with uncountable number of people. Native Dubai inhabitants are also known for their biasness towards non-native inhabitants. Since the world economy melt down in 2009, the thousands of workers stranded in the city have been forced to live in unthinkable conditions. Immigrants (mainly from India and Pakistan) have been reduced to slave labourers and are often employed in labour camps at construction sites. It goes without saying these workers have little hope for a better life.