Siamese twins are amazing in their own right. For centuries, they have baffled doctors and scientists, as well as the public. For centuries, too, they have been subject to finger pointing and appearances in circuses and entertainment shows. Below, we have compiled a list of the most fascinating Siamese twins that have led the most interesting lives.

10 of The World’s Most Amazing Siamese Twins 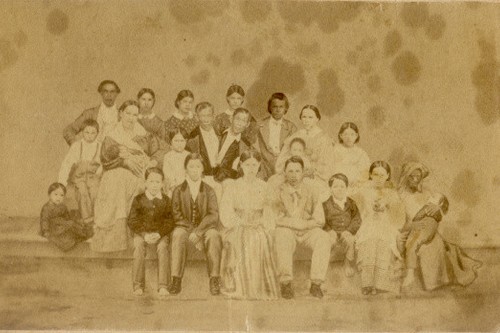 Chang and Eng, conjoined twins, were born in 1811 in Siam, a country that is nowadays known as Thailand. In 1929, the twins left Siam and began touring all around the world, giving shows and lectures. Chang and Eng became so famous that the word “Siamese twins” was eventually accepted as a proper term to call twins that were conjoined at birth.

Eventually, Chang and Eng retired, bought some land in North Carolina, became US citizens and even came to own some slaves. They also married two sisters which caused an uproar in the community and the media. Much speculation and ridicule about their life, as well as sex life, followed, but Chang and Eng, along with their wives, ignored it, simply wishing for a happy, peaceful life.

The two couples began living in separate homes, with Chang and Eng alternating half weeks in each. In 1844, both sisters gave birth. Overall, the brothers had twenty one children in total.

Eventually, the twins fell into financial difficulty and took up touring once again, this time bringing two of their children along. However, they were not as successful as before and many people refused to see them. 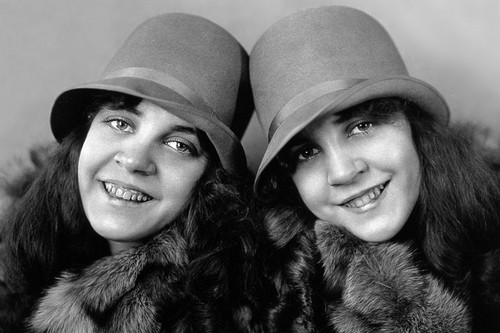 Daisy and Violet Hilton were born in 1908 in England. Their mother refused to keep her daughters and instead sold them to a woman named Mary Hilton who became the twins’ guardian. Mary Hilton gave the girls her surname and placed them on display in the back room of a pub, where anyone who paid the price of admission could see them. The twins were exploited by their new guardian until her death, after which, Mary’s daughter Edith and her husband took over the guardianship.

When the girls became teenagers, their new guardians placed them among famous vaudeville legends. The girls too became legendary and earned extraordinary sums of money which went directly to their guardians. The twins were kept captive and were forced to practise their talents, such as violin and the saxopohone, for hours on end.

However, Harry Houdini advised the twins to educate themselves on their public persona through the media and this led to their pursuit of liberation through the justice system. In 1931, Daisy and Violet were granted emancipation and for the first time ever, confronted the world by themselves.

Since the twins never had to manage their finances previously, their fortune dwindled away quickly and their success diminished. Desperate, the twins asked the owner of a grocery store to take them on full time and led the rest of their lives far away from the spotlight. 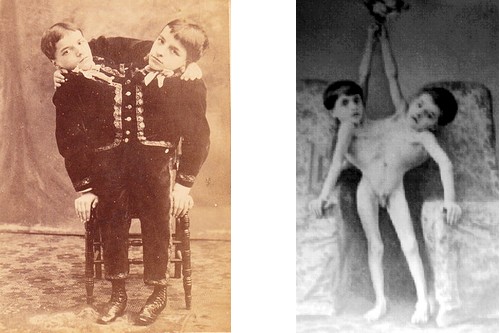 The Tocci brothers were born in Italy in 1877 and were separated above the waist. They were given away by their parents to ‘The Royal Academy of Medicine in Turin’ when they were just one month old. There, they were examined and exhibited and eventually became extremely popular both in America and Europe. They were known as the ‘two-headed boy’ or the ‘blended-twins’.

Since they shared an abdomen, pelvis and legs, the twins never learned to walk and always needed assistance. Each twin controlled one leg and found it difficult to co-ordinate their movements with the other.

Since their birth, the twins were exhibited all around the world. They went on many tours, both in Europe and America. At the age of twenty, the twins decided to retire. They had made enough money both for themselves and their family. Besides, they never much cared for fame or money. They eventually married sisters and lived the rest of their lives in seclusion, near Venice. 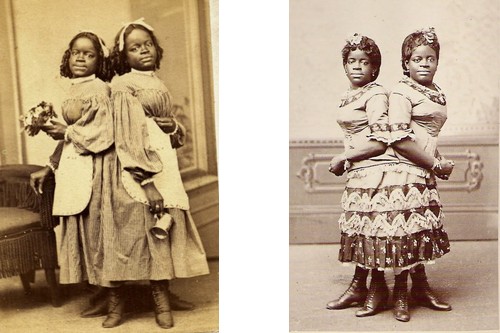 Millie and Christine McKoy were born into slavery in 1851 in North Carolina. Their parents were slaves owned by a blacksmith named Jabez McKay. McKay saw the commercial value of the twins and sold them for $1,000 to an agent for public exhibition. The twins were sold and bought numerous times before they finally settled with Joseph Pearson Smith and his family. They were hired out to various road shows and became known as the ‘Carolina twins.’

It was during this period that the girl were kidnapped and taken to England where they continued to appear at various shows and exhibitions. However, Smith tracked the twins down and took them back to America. The girls continued to perform and were soon known as the ‘Two Headed Girl’ or the ‘Two Headed Nightingale‘.

In 1863, the Emancipation Proclamation brought an end to slavery but Millie and Christine decided to stay with the Smiths. They continued appearing at various shows and circuses and in 1871 they performed for Queen Victoria who in turn gave them diamond hairclips.

However, eventually Millie’s ill health stopped the twins from further performances and they retired to their home in rural Columbus County where they continued the charitable work they had started before.

Rosa and Josepha Blažek were born in 1878 in Bohemia. They began appearing in shows and exhibitions at the tender age of one. When the girls were thirteen years old, they went to Paris to see doctors about the possibility of separation. However, since they shared a lower vertebrae they were told that seperation was impossible.

The twins, as often is the case, were different in many ways. Rosa was chatty and witty whereas Josepha was introverted and quiet. Rosa was also stronger Josepha, both physically and personality wise. In 1910, Rosa gave birth to a son by vaginal delivery (findagrave.com). It is interesting to note that Rosa is the only conjoined female twin in history to bear a viable child. It is said that the boy’s father was forbidden to marry Rosa on the grounds of morality.

As Rosa’s son grew, he began performing with them. Indeed, he was with them when the twins first went to America. However, soon Josepha became ill. The illness spread to Rosa and the twins died in 1922. 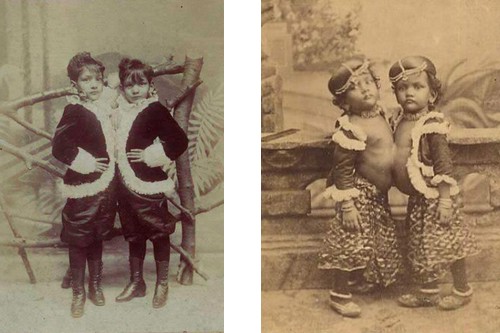 Radica and Doodica, also known as the Orissa sisters, were born in India in 1889. The residents of the village were distraught by the twins’ appearance, saying that they were ‘symbols of divine wrath.’ The whole family was chased out of town. Upset with how his daughters looked, their father was about to separate the girls himself but was stopped by an official who handed the girls to a local temple.

In 1893 the twins were sold to a showman Captain Colman. They then began to travel around Europe, performing at various shows and exhibitions. Captain Colman is said to have been a nice man who treated the twins more like an adoptive father as opposed to an exploitive owner. 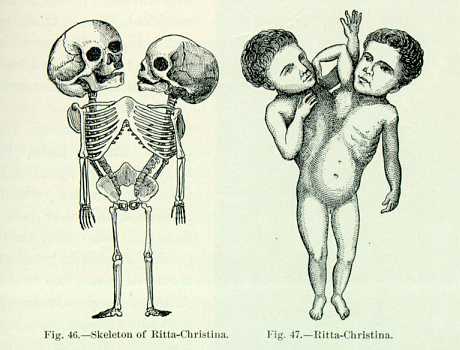 Ritta and Christina were born in 1829 in Sardina. Their family, although poor, decided to make a trip to France where they hoped that doctors and scientists would pay good money to examine the twins. However, the family did not know how to promote the twins and thus grew poorer and poorer each day.

The family then tried to exhibit them publicly but the city officials would have none of that. However, word spread and to the family’s delight, doctors came to examine Ritta and Christina. Unfortunately, the constant observation interfered with the twins sleep and Ritta, who was of ill health since the day she was born, grew weaker and weaker by the minute. She eventually died eight months after she was born. Christina, who was always of strong and of good health, died only moments later. 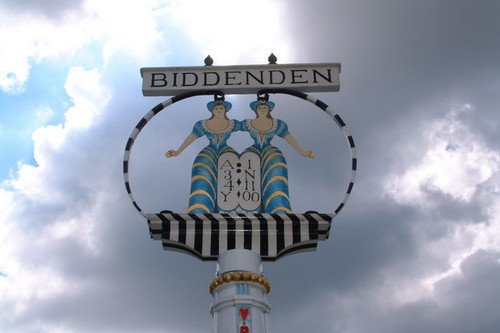 Eliza and Mary Chulkhurst, better known as the Biddenden Maids, were born in 1100 to a wealthy family. The Biddenden Maids are considered to be one of the earliest cases of conjoined twins on record.

In 1134, Mary died from illness. It was suggested that Eliza should be separated from her sister to ensure that she goes on living. However, Eliza disagreed, saying that together they came into this world, and together they shall go. Thus, Eliza died six hours later.

The sisters left their wealth to the poor and for many years, every Easter Sunday, bread, cheese, cakes and beer were distributed to those less fortunate.

An annual festival has been celebrated in the Biddendem Maid honour right up until the early 1900s. An important tradition of the festival has been the creation and consumption of ‘Biddenden Cakes’ which featured the two famous sisters. 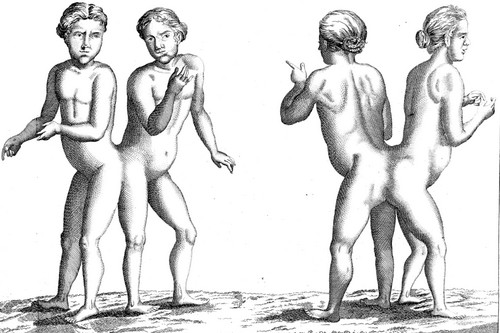 Helen and Judith of Szony, most often referred to as ‘The Hungarian Sisters’, were born in Hungary in 1701. The appearance of the twins baffled everyone and doctors soon decided that they were born conjoined due to their mother’s overactive imagination during pregnancy.

Since Helen was born first (Judith was born three hours later) she was considered stronger, as well as more intelligent and attractive. Understanding the need to take advantage of their situation, the twins soon turned to music and began performing at various shows and exhibitons throughout Europe.

However, their career was not to last for long. Shortly after entering a convent, Judith died of an unclassified brain trauma. Helen died a couple of hours later. 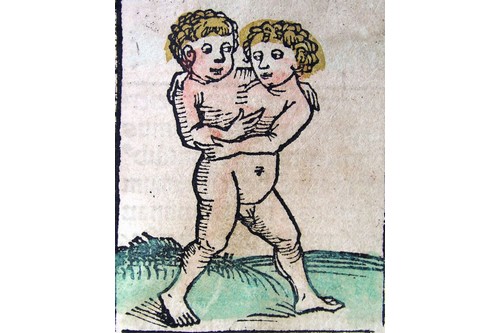 The Scottish Brothers were born in 1490, somewhere near Glasgow. Little is known about them but it has been suggested that they were dicephalus conjoined twins, meaning two heads on a single body. However, other sources say that they were conjoined purely below the waist.

In either case, it is known that the Scottish Brothers were taken to the court of King James IV. The King ordered their careful upbringing and education. Thus, they learned how to sing and were fluent in several languages. They also quaralled a lot and sometimes even fought physically.

They died at the age of twenty eight in 1518. The cause of their death is unknown.