Sports cards are collectibles. A typical sports card will have the picture of the player on one side and the player’s stats on the other. Such cards have featured many significant players from the world of football, baseball, basketball, boxing, tennis, golf, racing and hockey. Many of these cards, especially the ones produced before the 1980s are sold and bought at high prices. Such precious sports cards are a collector’s dream to behold. Here we are listing the world’s most valuable sports cards ever sold: 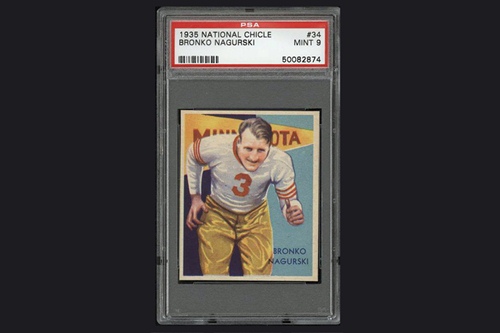 This is our only football card on the list of most valuable sports! Bronislau “Bronko” Nagurski played in the NFL for 9 years. He helped the Chicago Bears win two consecutive titles in 1932 and 1933. He eventually chose to leave football to become a professional wrestler. In 1963 he was selected as a charter member for the NFL Hall of Fame. While this isn’t a rookie card, it is one of few that are still in circulation of a very rare set, helping to make it the most expensive football card ever sold at $240,000. 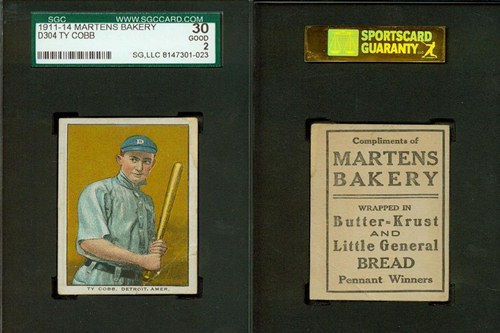 Ty Cobb, aka The Georgia Peach, was the greatest dead-ball era player to ever grace a baseball diamond. The man is said to have set 90 MLB records in his day. Cobbs career was so successful that in the inaugural Hall of Fame voting session, he got 222 out of 226 possible votes. He played 22 years and will be remembered as one of the greats. His career began in 1905. This card from General Baking Co. was hand drawn. A PSA 8 Near Mint version of the card was sold in 2008 at a Goodwin & Company auction for over $270,000. 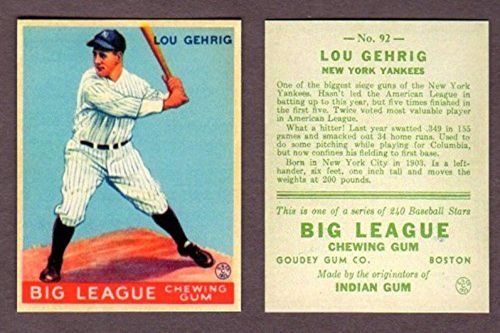 Lou “Iron Horse” Gehrig is another one of baseball’s superstars and it’s no surprise that cards featuring him would land among the most valuable sports cards ever sold. Gehrig was the original Iron Man. Playing in 2,130 straight games without missing one. He was also the first player to ever have his number retired by a team. Sadly he was forced to end his streak and his career in 1939 when he was struck with his namesake disease. This 1933 Goudey card was a PSA Gem Mint 10. It is also the ONLY perfect version of the card ever found and sold for almost $275,000 from Memory Lane Inc. A PSA 9 version of the card is believed to be worth around $33,000. This is a prime example of why you should take great care to keep your cards in the best possible condition. 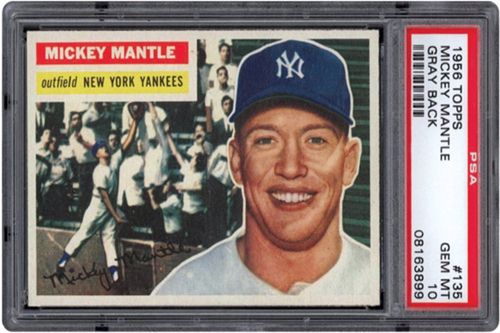 Mickey “the mick” Mantle is truly an American treasure. Deeply cherished among not just the Yankees but all baseball fans, Mickey is considered the best switch-hitter to ever play the game. After only Babe Ruth, Mantle is probably the most beloved baseball player of all time. Only 3 perfect PSA 10 cards exist of this Mantle Rookie card. Even so, a PSA 9 card was sold at auction for $282,587 in 2008. We don’t know how much a PSA 10 is worth because all attempts to purchase them have been met with negative results. However it could easily happen that one day this card shoots up this list with a 7 figure sale! 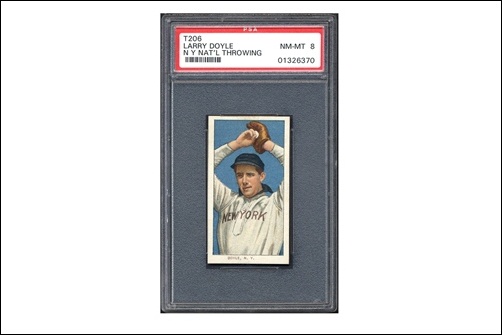 This is first card among the most valuable sports cards where the player is not well known to the general public. Among collectors and hobbyists though, there couldn’t be a better known specimen. Judd “slow joe” Doyle, played only 5 years and is not a member of the Hall of Fame. This card is not valuable for the greatness of the player. One of the things that make this card so valuable is that it is in fact an “error” card. On the bottom of the front of the card it says “N.Y. Nat’l” next to his name. He was in fact not a member of the National (Nat’l) League but the American League N.Y. Highlanders. There was another Doyle who did in fact play for the National League, but his name was Larry Doyle. Which set up a confusion and an error which today is probably the most valuable error ever made in the hobby. 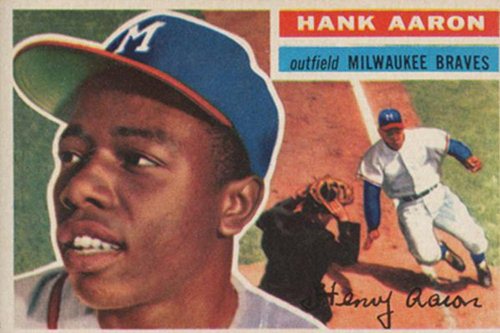 Henry Aaron, aka Hammerin Hank, is one of the most influential power hitters to ever play the game. On April 8th, 1974 he cemented his place in the record books with his 715th Home Run. His record of 755 lasted 33 years until Barry Bonds surpassed it 2007. This card is a member of the Dmitri Young Collection which is PSA 10 GEM Mint condition cards. This 1954 rookie card sold as part of the $2.4 million collection. Among collectors this card remains one of the most sought after rookie cards in history. 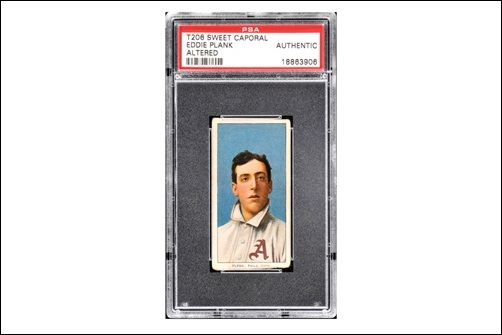 Eddie Plank, Gettysburg Eddie to his fans, was a Hall of Fame pitcher who played in the majors from 1901 to 1917. This card like the rest of the T206’s was put out by the American Tobacco Company. The 1909-1911 series is one of the most coveted sets in the hobby. A Hall of Famer since 1946, he is remembered for many things; including being the first lefty to win 300 games. So it’s no wonder that this card is worth over $400,000. Eddie Plank’s sports card came fourth in our list of most valuable sports cards ever sold. 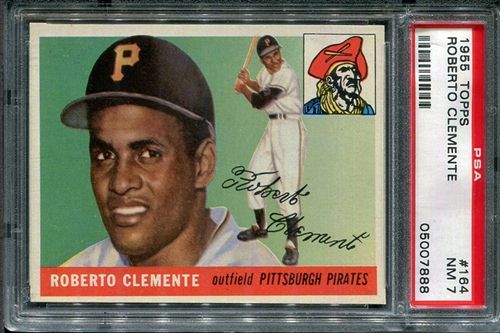 Roberto Clemente was a Puerto Rican who came to the United States to become a Half of Fame right fielder for the Pittsburgh Pirates. He had over 3,000 hits in the course of his career and led his team to a 1971 World Series victory. He died in a plane crash at the young age of 38. There is only one of these cards that have ever been given a perfect PSA 10 rating, out of nearly 3,000. Considering a PSA 8 graded one went for around 6,000 it’s stunning to see just how much condition can be valued. 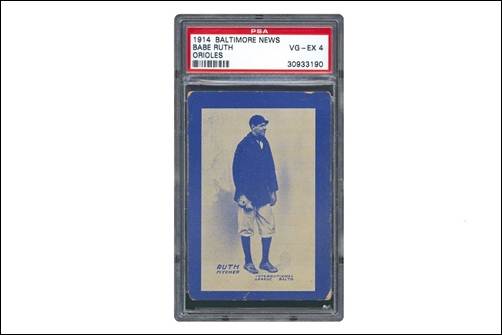 Babe Ruth, the great bambino, the sultan of swat, no matter what names you pick he is the most beloved sports player in American history. The fact that his sports cards rank among the most valuable sports cards is really no surprise. His 1914 rookie card easily makes the number 2 spot, it one of the most expensive sports cards ever sold. This card is worth just around half a million dollars. Of the only 10 believed to exist today, none of them are in very good condition. Only 10 of these cards are believed to be in existence today. One is in the Babe Ruth Museum in Baltimore, Maryland. The other few are owned by anonymous multi-millionaire collectors. It is unlikely that any of these examples will be available in the foreseeable future (if ever). If ever there is one found that has a Grade above PSA 7-8 you might see numbers that rival the T206 Wagner. 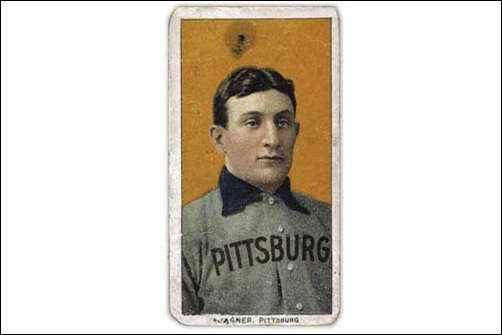 At number one of the most valuable sports cards is the T206 Honus Wagner baseball card which is an ultimate collectors dream. Only 50 to 200 ever released. Honus was a dead-ball era player, considered to be one of the best of all time. This card was made by the American Tobacco Company from 1909 to 1911, as part of its T206 series. Wagner ordered them to cease production of this card immediately, because he did not want kids to buy cigarette packs, especially to get his card. The ATC ended production of the Wagner card and thus created an extreme rarity. On April 20, 2012, New Jersey collector bought a low-grade T206 Wagner for more than $1.2 million. On April 6, 2013, a T206 Wagner was bought for over $2 million in an online sale by Goldin Auctions.

Would you like to own one of these priceless sports cards?