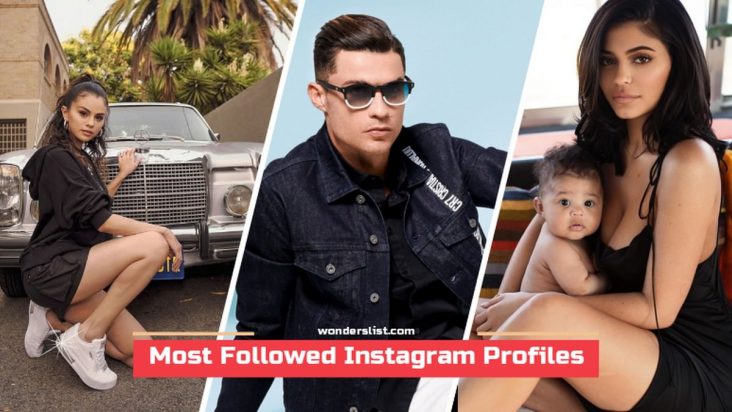 Listed below are top 15 most followed Instagram profiles as of February 18, 2021.

She was born in New York, but her origin is from Puerto Rico, Jennifer Lopez, known as J.Lo, is a singer, actress, model, and music producer. This beautiful Latin woman is now the 15th most followed person on Instagram after her performance at the 2020 SuperBowl Halftime Show. So it’s no surprise that your account is on this list, totaling more than 143 million followers. In J.Lo’s profile, as it could not be otherwise, you can find news, selfies, photos with your family, and images of the celebrity at events. Among the highlights of the profile, there is also a space reserved for merchandising.

The most successful player in Brazilian football today is also a success on social media. Neymar, who since 2013 acts and lives in Europe, gathers more than 146 million followers on his Instagram profile.

If you like football world, following him is a great request for you, as the athlete usually posts images of training, physiotherapy sessions and behind the scenes of games and competitions. Thus, other great soccer stars are a constant presence on the star’s Instagram. In addition to these issues, Neymar usually posts promotions from his many sponsors and family moments.

Taylor Swift doesn’t follow anyone on her Instagram account at all, but the reverse is not true. There are more than 148 million accounts that follow the steps of the American singer and songwriter. In the account, Taylor exhibits, in addition to the classic photos and personal selfies, promotional materials from her recent works and images from shows around the world. People really like watching Taylor Swift life.

Kendall Jenner was born used to fame. In 2009, when she was just 14 years old, she made her first appearance as a model and never stopped. Today, according to Forbes, it is the highest-paid model on the planet.

Kendall’s fame goes beyond the catwalks. Her sisters have the same vocation for the spotlight, the Kardashian-Jenner clam. Thus, the model appears constantly on the reality show Keeping Up with the Kardashian, which has been on the air since October 2007.
In the celebrity’s Instagram account, with 152 million followers, you will come across pictures of your professional and personal life. She mostly enjoys showing her funny childhood.

The first brand that appears on the list of the 15 most followed profiles on Instagram is National Geographic, owner of the homonymous magazine, which has over 130 years of history. Circulated monthly in more than 33 languages, the journal is a constant presence in journalism, writing and photography awards.

On Instagram, National Geographic’s focus is clear from reading the bio, which says: Experience the world through the eyes of our photographers. The content you can already imagine, right? Breathtaking images depicting biodiversity and civilization around the world. There are already more than 153 million followers.

Social networks have always been present in the career of singer, actor and composer Justin Bieber. Even before the release of his first EP in 2009, the Canadian had already gathered millions and millions of views on his videos on YouTube. In 2018, it would become the second most followed channel on the platform.

On Instagram, Justin has more than 163 million profiles following him. On the network, the famous showcases bold looks, displays photos of the places he visits and even discloses the work of other artists.

His posts include pictures of his daily life, his family and wife Hailley Bieber and other topics of interest to him, such as his music career.

Singer, producer, actress, voice actor, model, and businesswoman. Beyoncé’s activities seem to have no end, as well as her list of followers. There are 166 million people who follow the American, winner of numerous important awards.

In the account, Beyoncé has a very professional behavior. The vast majority of posts refer to the singer’s recent work and show images of her on stage or posing for a shoot. In 2019, Beyoncé caused a furor in the audience by participating as a voice actor in the live action of Lion King.

Lionel Messi’s posts generally cover the routines and competitions he participates in with the shirt of the Argentine national team. There are also moments of relaxation.

Another participant of Keeping Up with the Kardashians, Kim is the most famous sister and also the one who is most involved in controversies. In 2016, along with her husband Kanye West, she was considered one of the most influential people on the planet, according to the ranking of Time magazine.

On Instagram, Kim is very active, mixing photos in which only she appears with others that bring together more family members. Thanks to the reach obtained (more than 205 million followers), it is successful with the launch of its own products, which include a book, several fashion articles and even an application.

At just seven years old, Selena Gomez started her artistic career on the children’s series “Barney and Friends”. Since then, her rise has been meteoric. Today, the actress, singer and stylist gathers 211 million followers on Instagram.

In the account, Selena usually posts selfies and photos with other artists, as well as behind the scenes of the events she participates in. In addition, she does not hesitate to use her profile for humanitarian purposes. Right in the bio, the former Disney star encourages adherence to the Planned Parenthood program, which provides reproductive health services.

Kim Kardashian’s youngest sister, Kylie is famous for participating in the reality show Keeping Up with the Kardashians and for her cosmetics line Kylie Cosmetics and Kylie Skin that earned her the title of the world’s youngest billionaire, at 21.

With 216 million followers, she dedicates a large part of her space on Instagram to beauty tips, showing off her nails, lips and makeup that draw the world’s attention.

In addition, the celebrity’s profile is also focused on the dissemination of personal photos, such as cute photos in which she appears with her little daughter, Stormi Webster.

Very famous for the action films in which he participates, such as the Fast & Furious franchise, the actor gathers 218 million followers. When viewing his posts, it is easy to understand why he deserves the nickname The Rock. Dwayne Johnson shows in his Instagram personal account his own routine, especially his passion for body for fitness.

In addition to videos and photos of himself working out, The Rock often uses the network to publicize his latest work and advertise to its various sponsors.

Ariana Grande is one of those artists who has always been famous. In 6 years of solo career, the singer was nominated for 6 Grammys, winning one. On Instagram, Ariana is accompanied by more than 222 million followers, making her profile the third most followed of the entire social network.

Her posts are mostly related to her musical productions and the rehearsals she performs as a model. In addition, she makes clear her passion for animals especially dogs, as we can in so many pictures in her profile.

The greatest European player in the history of football, Cristiano Ronaldo has always been a media phenomenon. In addition to the vast repertoire of dribbling and goals displayed on the pitch, Portuguese is a frequent figure in commercials for the most diverse products, ranging from sporting goods to anti-dandruff shampoos.

Being one of the biggest stars of the most popular sport on the planet, it is not news that Cristiano appears in second place in the list of most followed on Instagram. In his profile, which adds 263 million followers, the star shares his personal, sporting routine and also discloses partner products.

386 million. This is the number of followers of the official Instagram account, which is by far the most followed across the network. Following the profile of the social network itself may sound like a tedious idea, but that false impression ends in a quick visit on the page.

There, the most relevant profiles, hashtags, posts and trends for the user are compiled. Thus, the page ends up becoming a perfect menu for those who want to explore more deeply the vast world of this social network.