There is a lot of unusual things happened every year that left many people wanting more excitement. Here, below is the list of  Top 10 Astonishing and Unusual Photographs of the year. Watch all these cool photographs and I’m sure you’ll really enjoy!

Take a Cool look at the Top 10 Astonishing and Unusual Photographs:

1. A Woman Being Tortured 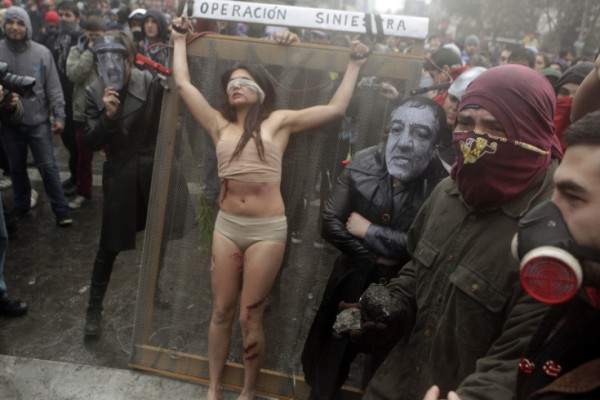 A group of actors perform a woman being tortured during a protest against the premiere of a documentary about the late Gen. Augusto Pinochet in Santiago, Chile.

American tourist Ella uses an iPad while riding a Wi-Fi-outfitted donkey lead by her brother Aaron, in Kfar Kedem, a biblical reenactment park in the village of Hoshaya in the Galilee, northern Israel. Visitors riding donkeys through the Old Testament landscape can now also surf the web while being transported across the land of the Bible.

3. A Militant Arrested in Women Dresses

Afghan security forces escort Taliban militants clad in Afghan women dresses to be presented to the media at the Afghan intelligence department in Mehterlam, Laghman province, east of Kabul, Afghanistan.

Chandra Bahadur Dangi, a 72-year-old Nepali who claims to be the world’s shortest man at 22 inches in height, stands near his home in Reemkholi village, Dang district, some 540 kilometres southwest of Kathamandu. >> Shortest Athletes That The World Has Witnessed.

7. A Female Runner is Attacked by Zombies

A runner is ‘attacked’ by a number of ‘zombies’ as she takes part in the 5K Zombies Race in Madrid, Spain. >> 10 Ways to Survive a Zombie Apocalypse.

A young girl pokes a homeless man sleeping under an orange tree near Syntagma Square in central Athens.

Firefighting planes fetch water from the Beniares reservoir to fight a wildfire next to the Sierra Mariola Nature Park in Cocentaina near Alicante, Spain. >> 10 Best Action Shots of Military Tech.

Hope you enjoy this list of  Top 10 Astonishing and Unusual Photographs. Please share your thoughts in comments.