The wonderful world of sports is mostly limited to the best known, watched or played ones. But taking a closer look at some of the lesser known, yet true, sports of the world will either leave you saying, “Unbelievable” or “I don’t believe it”. The sports mentioned here are some of the unusual, weirdest, and most bizarre sports played all over the world and to say that they are growing in popularity might just be wrong. Are they fun and exciting? Well, that’s for you to decide really. Ready for something you would never expect? Let’s do this.

Listed below are top 10 unconventional and most bizarre sports that people play around the world. 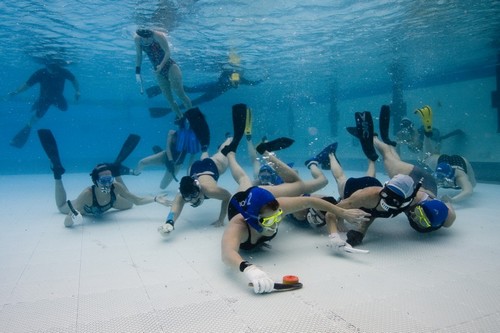 This might be hard to understand but just picture hockey played under water. Simple? Well according to spectators, not so much. Just like field hockey, ice hockey or air hockey, the objective is to use a stick (or a paddle in case of air hockey) to hit a puck or ball into the opponent’s goal. Because it is played under water, the sport is aptly named Octopush by participants. The teams consist of 6 players and are surprisingly very common around the world although having a huge spectator crowd is virtually impossible because of the playing field or pool to be more precise. 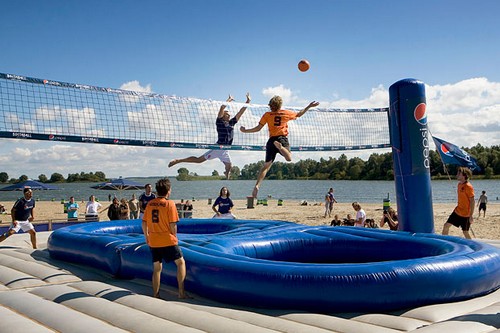 This sport originated in Spain and is slowly growing in popularity. It is definitely a sport for the adrenaline filled athletes. Based on the concept of the sport volleyball, bossaball’s rules are similar except for part where there is a trampoline involved. Players jump and either kick or hit the ball over the net into the opponent’s area. There are 3 to 5 players on each team and a point is awarded when the ball touches the floor. It is an energetic sport that requires a lot of stamina and athleticism or just a very bouncy trampoline. Either way, fun to watch and try.

8. Wife Carrying – The Most Outrageous Sports 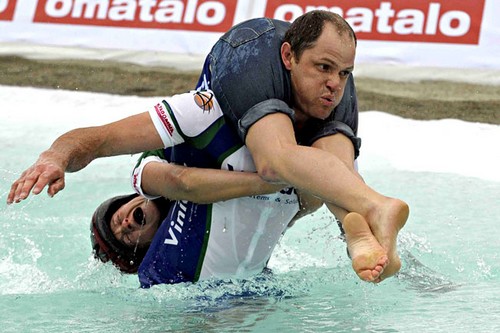 This is definitely one of the strangest and most bizarre sports in the world. Wife Carrying has its roots in Finland (where else right?), where the men carry their wives through obstacle courses in the shortest time. The funny thing is that most of the women are just as capable of carrying their husbands through the course. The winning husband wins his wife’s weight in beer. What better prize for a loving, strong husband? I think they should enter the sport in the Olympics. What’s your opinion? See also; Top 10 Hardest Sports to Play. 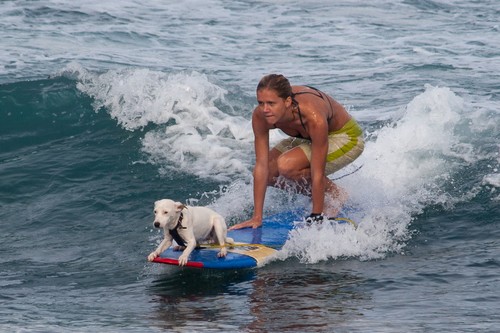 When we say a dog is a man’s best friend, we didn’t realize how deep that really went. For all the surfing enthusiasts out there, here’s a sport you can share with your favorite furry friend. Dog Surfing is something that has caught on as an exciting and “way too cute” sport. It started in San Diego and spread across most parts of America and is very common in Australia as well. What is the objective of this sport? As simple as training your dog to stay upright on a surf board while catching some waves. There are many competitions that take place in California on a yearly basis and they draw crowds from all over. Our only wish is that the prize is not just a doggy treat. 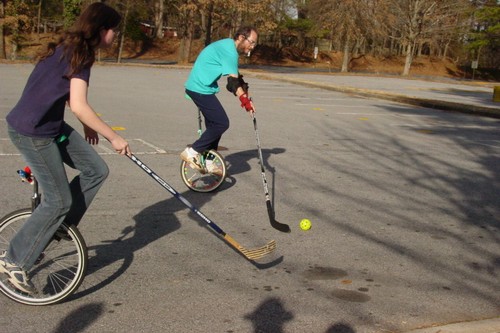 Probably one of the funniest, also most bizarre sports to watch. Unicycle polo is something out of a bad nightmare. Imagine the refined sport of horse polo and replace the horses with hilarious, off balanced one wheeled cycles. The sport has the exact same rules as polo but, trust me, it is a lot harder. The objective is to strike the ball into the opponent’s goal with the wooden mallet while maintaining balance on the cycle. It is something definitely worth watching especially if someone is in a bad mood. It will bring a smile to their face within a few minutes, guaranteed by the participants of the sport. 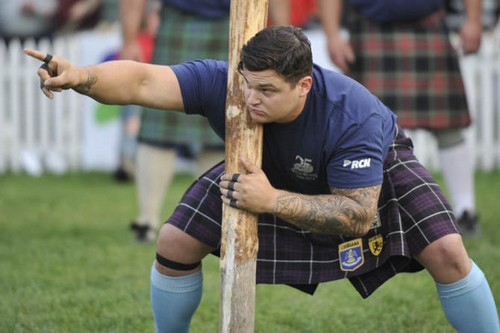 One of the oldest lesser known and most bizarre sports in the world, Caber Toss is something that hails from breathtaking Scotland. And while we are on the topic of breathtaking, how about tossing large wooden poles over a certain distance? Yes, the Scott’s have found a way to make throwing logs into something competitive and fun. The object of the sport is not really to throw the logs farther but it is to land the top of the log near the person throwing it. If all this is not good enough for you, picture this. All the participants must wear a kilt to the sport. So, basically it’s a group of men in skirts throwing around big logs. Interesting?

4. Chess Boxing – The Most Bizarre Sports 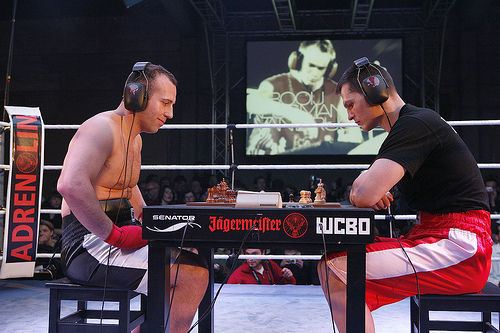 This is a sport that is a perfect mash up of brains and muscle. The participants need to be skilled at both chess as well as boxing because as the name suggests, this sport includes both games. There are alternate rounds of chess and boxing which allows the inner boxer to take a break and recoup while working the mind to try and knockout their opponent with a checkmate instead of a right upper cut. People have taken a liking to the sport because it is not all about brutality and neither is it all about boring slow moves of chess. It’s a perfect marriage. Whoever thought it up, there’s just one word – genius. 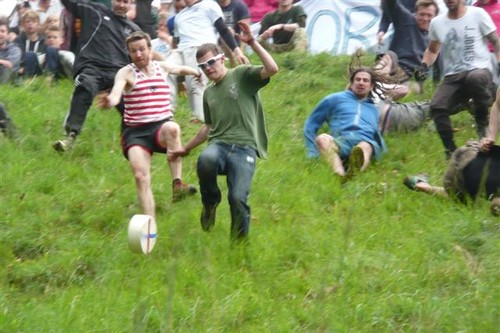 Food has played a part in some sports or competitions for thousands of years and this is not very different. Cheese rolling is something that has been around for over 200 years and is still practiced today. During the Spring Bank Holiday in England, people gather at the top of Coopers Hill and prepare for something very exciting. At the top of the surprisingly steep hill, a judge rolls a round of cheese down the slope and the participants follow. People try to run down the slope but quite predictably end up rolling or sliding down like the cheese. The winner of the race wins the round of cheese as well as a few bruises and scars and if they’re lucky, maybe a broken bone or two. 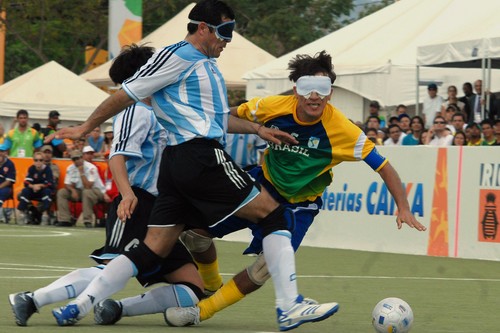 There are millions of people all over the world that follow the fast paced sport of soccer and the numbers keep growing. It is a widely followed sport that people without the ability to see have taken to it and are doing great. Blind soccer is one sport that encourages disabled people to get out of their comfort zone and explore something that the whole world takes part in. It is pretty much like regular soccer except for the ball which is filled with pebbles or marbles, which help the players, locate it and the only people who do have the ability to see are the goalies. All in all, a very exciting sport to watch or take part in. 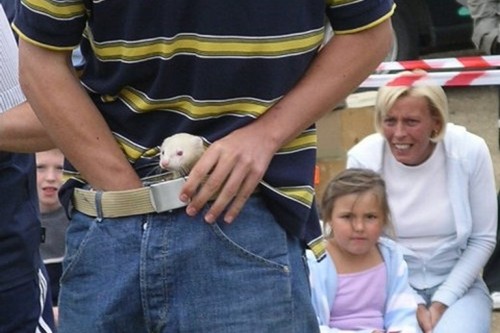 We have reached the end of this somewhat hard to believe list and we end it with a bang (or bite). This is hands down, the most bizarre sports I have ever come across. Ferret legging is actually a sport and has been continued for many years all across the world. It is basically a sport to show off the man within but could change the manly part in a couple of minutes. The idea is to tie the pants at the ankles so that there is no escape route and to drop two ferrets into the pants.

The person with the longest time wins. Sounds ridiculous? It is but at the same time, a man named Reg Mellor holds the world record time for this out of this world sport. He set an outrageous time of 5 hours and 30 minutes in the year 1981. His secret was that he made sure he fed the ferrets before putting them in his pants.

Here are some other related lists, you may also like; 10 incredibly dangerous sports, 10 of the strangest sports, 10 greatest sports and 10 shocking sports murders.