Clown sightings in the states of North Carolina, South Carolina and Ohio have left people shaken. Though clowns have been known to entertain kids and elders alike, there’s still something creepy about them. No one knows who is actually behind the grin. Anything, literally anything could happen when someone doesn’t disclose their identities. This reminds us of “The Policeman Story”, a famous Jackie Chan crime and action thriller. Those clowns scared us pretty bad even then. Below are a few reasons clowns can fuel your nightmares! 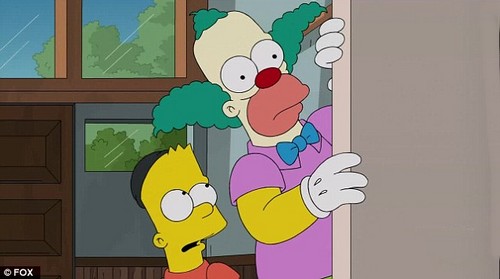 During the early years of motion pictures, clowns were seen as more of a depressed and sad figure than someone who could make others laugh. It usually appeared in dark coloured dresses, opposite to the bright yellows and polka dots we see now, and carried a sinister aura about them. Tito, a clown that appeared in the picture “Laugh, Clown, Laugh” in 1928, was a depressed and tragic character. His love for his adopted daughter was not returned with the same passion and this that led to his fall to death. This is all in the movies but any sensitive parent or child could end up thinking about him to bed and then let him scare you through the night.

9. The Joker from Batman 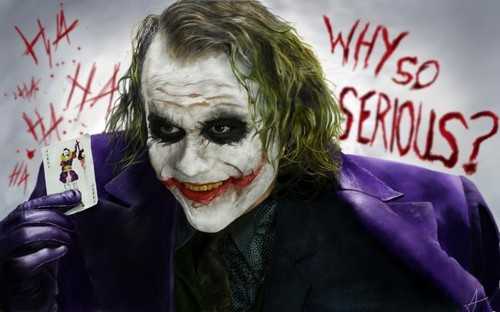 A devilish and insane joker, who is an archenemy of Batman, appeared first in 1940 in comics. The sadistic joker is dressed up in the typical grease-like paint on the face that is coupled with an unnaturally wide scary smile and red smudge that makes him look like he has ketchup smeared on his face. Nothing makes this joker happier than giving people pain through props used by jokers mostly- toxic balloons, carols that spit acid and so on. The Batman appeared on screen first in 1989 and continues to bind people to TV and cinema through films of which the latest is Suicide Squad 2016. As a kid I never liked this Joker and I wondered how that lady actually “kissed” him in order to buy Batman some time. Those lips freaked me out even as a child.

Stephen King wrote a famous novel about a clown that kidnapped kids and took them into the sewers. They were never seen again which implied that the clown killed them. With a story like that on the bedside table, not only will parents dream of clowns- they would also shun away any demands of a clown presenting toys on their kid’s birthday. He created a famous clown character Pennywise in 1986 which was quite terrifying. A fringe of red hair, stained teeth and a bulbous nose made Pennywise a perfect qualification of something gruesome rather than likeable. When asked about the character King said that he created Pennywise because “kids love clowns but also fear them.”

This takes the confusion of these poor little souls, overwhelmed with the world already, to a whole new level. 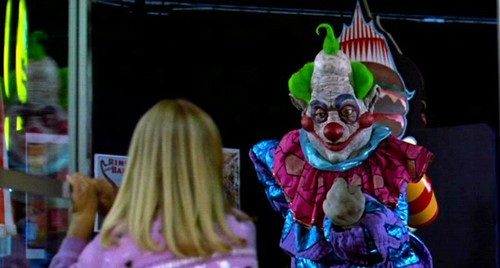 In 1988, we saw Killer Klowns from Outer Space. Apparently, not only did they have a problem with their spelling- they also didn’t get the purpose of clowns from up there. Clowns are meant to entertain kids rather than scare them away. These clowns from outer space had distorted faces, like clowns grown centuries old, and a liking for candy. The aliens disguised themselves as loathsome looking clowns and commence a murderous spree quite alarming for a small town that they landed in. Like clowns before them, they made use of stuff like balloons, creamy pies and extendable arms to do the dirty work. This makes the whole facade even scarier. Who had thought that a balloon could be used to cause murders? 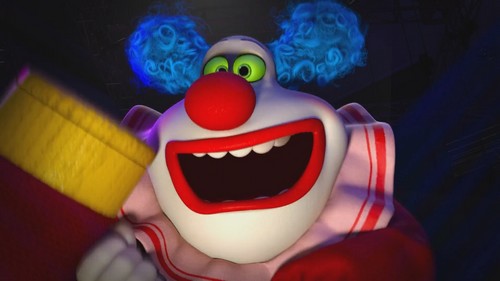 As Joy takes a tour down Riley’s brain in the animated film “Inside Out”, she finds a hyperbolic version of a clown in the place where the darkest fears are stored. The clown called Jangles scared Riley on her 3rd birthday because of its size, its uncomfortably loud laugh and blue hair. If this wasn’t enough, Disney/Pixar took it to another level by letting the clown swing a mallet around. Even as we near the end of 2016, clowns continue to scare kids just like in 1988 or before. 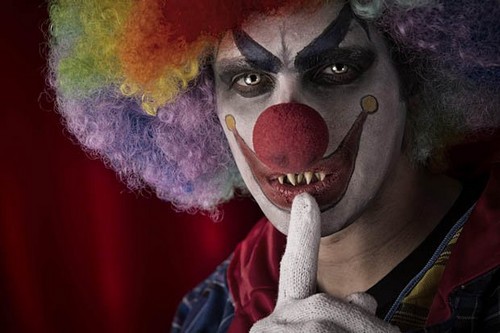 Out of the large list of existing phobias, Coulrophobia is quite interesting since it is the “fear of clowns”. The characters that emerge in the film industry every few years only add to this phobia since many filmmakers resort to using the clown as something bad and malicious. Clowns of America International is the largest clown club in the country and its President had to make a statement regarding Twisty- a horribly loathsome character in American Horror Story 2014-2015. It is actually a dilapidated version of a clown that appeared in the 18th Century in Paris, Pierrot. The portrayal was so disturbing to professional clowns that he said that they “do not support, nor are associated with Twisty in anyway.” 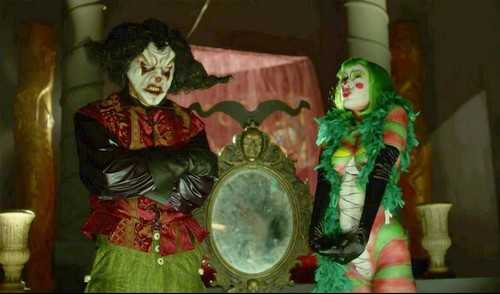 A film series that continued for almost two decades, Killjoy, made use of a clown to enact vengeance on the enemies of the summoners. Little did they know that the clown had an agenda of its own and liked to kill for the joy of it- as the name implies. Though not very ugly looking, the blatantly colored clown maintains an impressive record of killing people with both traditional as well as supernatural methods. 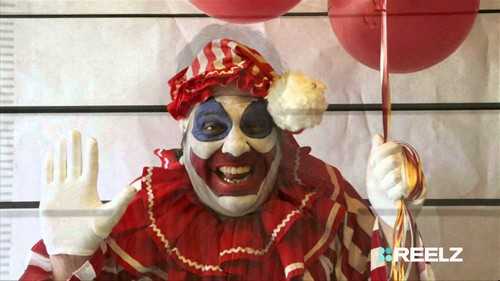 Let’s just move to real life for once in this list, away from the screen portrayal of clowns, and discuss the case of Gacy. He appeared as a clown Pogo, a character that he invented himself, on parties, in parades and on fundraisers. Pogo has been known to have killed at least 33 boys and young men. He lured them into his house for malpractice and buried 29 of the bodies inside his home as reported by The New York Times. All this was done within a time span of six years being 1972-1978. The media according to Psychology Today dubbed him as “The Killer Clown”. He was convicted for the murder of 33 people and executed in May 1994. 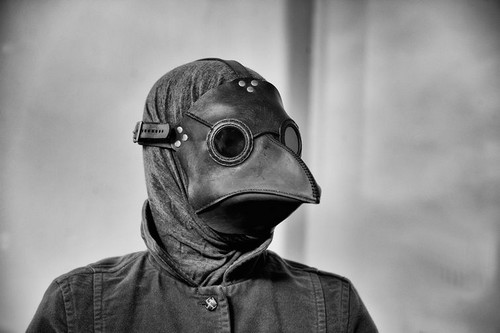 Even though clowns are supposed to bring laughter, people mostly associate them with negativity. There is something inherently negative about a person whose real expressions are hidden with a paint or mask. The same is not felt for Batman or people at a masquerade, yet, not knowing who the buffoon is makes people uncomfortable. Only recently, there have been four sightings of a clown in Greensville with a clown ‘near the woods’ allegedly trying to ‘lure kids into the woods’. One of the people who reported the sightings has stated that “almost 30 kids” asked her if she had seen a clown that day. When the Sheriff made a statement “the clowning needs to stop,” he didn’t smile- at all. 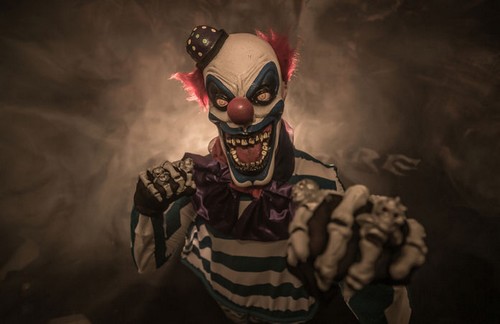 Clowns can pose acts and show stuff that appears otherworldly. They can produce things out of their sleeves, they can make flower stalks squirt water or fit 20 people into one tiny car. While they do all this for fun, it is usually taken as something unnatural to supernatural by onlookers. While this makes people uneasy in general, many react more aggressively because of the condition called “claurophobia” that we mentioned before. Even ‘looking’ at the image of a clown may cause intense unease and disturbance in these patients- according to American Psychologists. So if you come across a clown on a birthday party- after you have heard of, have experienced or read something bad about it- you might be in for a nightmare.

Disclaimer: All information and content of this post is for the purpose of knowledge, information and entertainment. There has been no intent to harm, cause unease or discomfort to any person reading or going through it. Any unease caused is purely coincidental and deeply regretted for.