The world is full of many wonders. There are animals of many shapes, colors and capabilities. They inspire a sense of awe with their beauty, and some with their viciousness. But, what about those that are cute and beautiful, but surprisingly dangerous animals? Let’s find out about these creatures that are marvelous to look at, but, menacing to deal with: 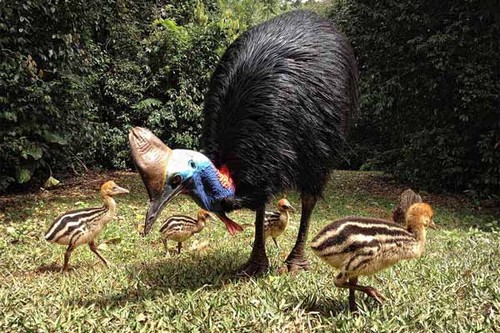 This flightless bird from New Guinea and north-eastern parts of Australia can reach up to a height of 79 inches. Structurally, they look like a cross of turkey and ostrich, and their bright coloration makes them resemble a peacock to some extent. Their body has black feathers. Their head is bluish, and the neck is red, but, the most astounding part is that these colours may change according to the mood of the bird. The females are larger and more colorful than the males. They have a crest called casque on their head, giving quite a warrior-like look. What makes these aloof animals dangerous is when they enter a full-on ‘attack’ mode: it attacks with its three toes which have long and straight nails that are sharp enough to be murderous. The bird will chase you down and kick you, and even sever your arms or eviscerate your abdomen if threatened. 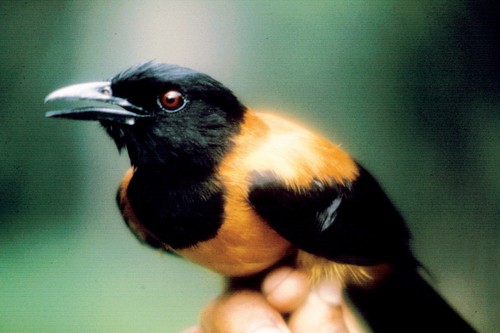 It is a known fact that birds can be vicious enough to strike. But, the hooded pitohui, an otherwise innocent-looking bird with plumage of bright yellow shades from New Guinea is a song-bird with a beautiful voice. But, the surprising fact about the bird is that it is poisonous. The bird’s skin and feathers are covered with a neurotoxin that can cause numbness, tingling, sneezing and other minor symptoms when touched. This poison, which it acquires from the consumption of Choresine beetles, and keeps it from being eaten, but, humans rub it in charcoal before consuming its meat. The poison is the same as that in Poison dart frogs, but, much weaker in case of the bird. 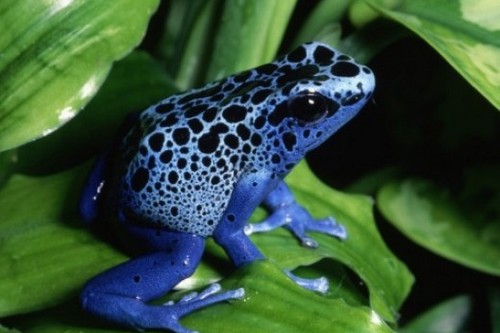 Though the very name of the animal is suggestive of its venomous nature, the appearance of it is most beguiling. Found in Central and South America, the frog is quite small, and is covered by arbitrary patterns of conspicuous colours. But, be wary: these colours are the signs that it is extremely poisonous. They secrete one of the most dangerous alkaloid toxins through their skin as a defense against predators. The different species show varying levels of toxicity, such that some can simply discourage predators while other can kill up to twenty humans. However, the chemicals derived from the skin of the frog has medicinal properties. 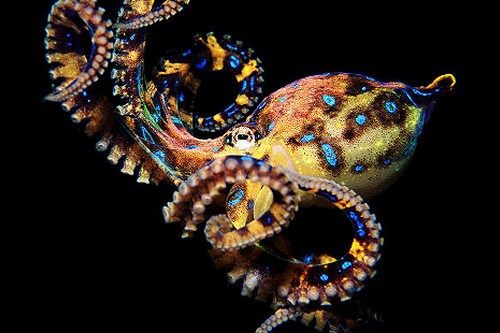 The beautiful octopus breed, defined by the blue-and-black rings on the yellowish skin, are found in the Pacific and Indian Oceans, from Australia to Japan. Despite the small size and docile nature, this octopus can pose quite a threat to humans and is recognized as one of the most venomous marine animals. The toxin, produced by bacteria in salivary glands, ca cause nausea, cardiac arrest, respiratory arrest, paralysis, blindness or death. When threatened, the pale yellow skin turns bright, and the brown spots darken dramatically, with iridescent circles starting to pulsate in the maculae. They may bite the attacker, including humans, in agitation. 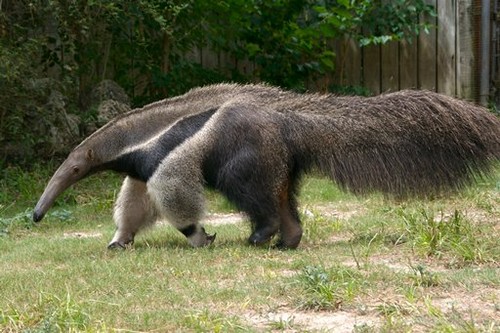 Very furry, cuddly and cute, the giant anteater is found in Central and South America. The huge animals, feeding on ants and termites, vulnerable to becoming an endangered species, as they are poached because of their fur, and also for the bushmeat. It is a good thing that they are armed with the tendency to turn all deadly in self-defense, a big size, and most importantly, powerful and sharp claws. All these combined  gives the giant anteater the capability to maul and disembowel a human in just a single swipe. 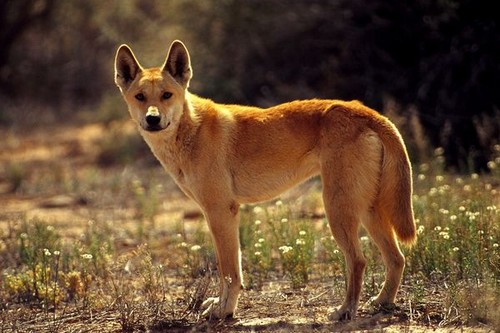 The furry face, wet nose and innocent puppy-eyes might melt your heart, but, this is no dog to be petted. It is the largest terrestrial predator in Australia and is also found in Southern Asia. Despite their physical similarity to domestic and pariah dogs, these animals are, by behaviour, similar to that of a coyote or an Indian wolf. They are shy and docile, and avoid human contact, but when agitated, they can become deadly, and attack like any wild animal would. Although they are sometimes domesticated, but, their true, wild nature is hard to suppress. 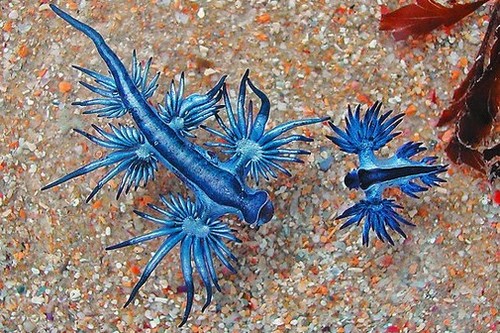 The blue dragon is a sea slug of a tiny size (about 3cm). This beautiful animal is often rightly referred to as a sea angel. Its tapering body is dorsally silver-grey in colour, and ventrally pale blue, with dark blue stripes on the head. It has six appendages which radiate into finger-like cerata, and a pointed tail. It feeds on hydrozoans, including the highly poisonous jellyfish-like creature called Portuguese Man-O’-War. It protects itself from being harmed by producing mucus, and saves the venom of its prey in the cerata to use for a defensive purpose. In fact, this poison is more harmful than its original form, as the blue dragon keeps it in a concentrated form. 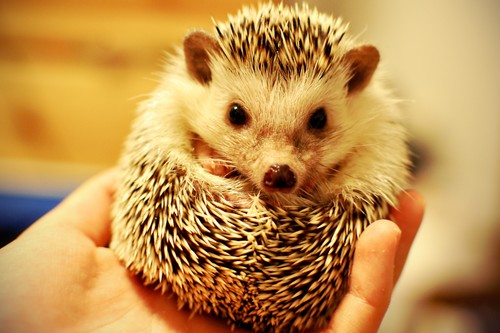 The tiny and lovable hedgehogs, which curl into a ball, or simply look at you with an everlasting smile on their face, have bodies covered with spikes. The little animal might just give you a prick with its spines if it is threatened. By nature, it isn’t a very social animal, and to pet it, one needs to make sure that it is socialized from a very early age. The spines, however, are not as dangerous as those of a porcupine. It may roll tight, with its spines pointing in all directions. It may even attack the predator by ramming into with the spines, or biting it. Their spines are not naturally poisonous, but, they lick their quills with tongues to cover a scented froth which, according to some scientists, is a ritual which makes the spikes a source of infection, and later, poison. They are also believed to carry salmonella. 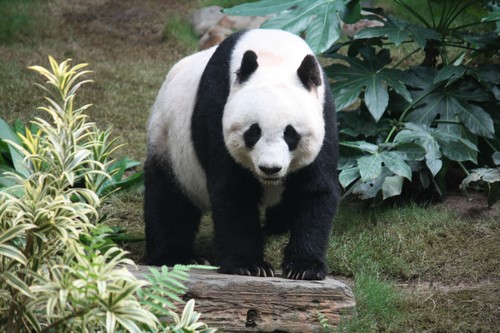 This big ball of black and white fur is probably the most adorable and most loved of all bears. Well, what’s not to love? It has thick and warm coat, innocent eyes and the fuzzy but human-like paws with a thumb! But, they are bears, after all, albeit vegan, and is not as docile as generally thought. They attack humans, but, more so out of irritation than aggression. In fact, they are often referred to as tigers with black spots.

Undoubtedly one of the most beautiful and dangerous animals: 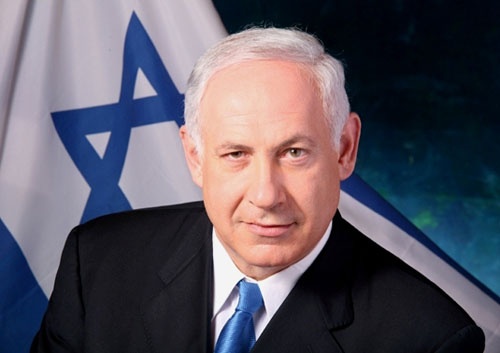 Why is that a surprise? Humans may be beautiful: Kate Winslet and Tom Cruise do belong to this species, after all. But, they can be quite deadly, not just to others, but, to themselves, as well. Human is the reason behind global warming and extinction of the dodo. It is human who rapes, robs and murders within its own community for the fulfilment of its interests. So, yes, humans are the most selfish and vicious creatures on this earth.

All good things, they say, come at a price, and perhaps, the price of beauty is paid by some creatures by the deadliness in its nature. But, whatever be the nature or appearance, all creatures are there for a reason in the cradle of Nature, and we need to conserve them.