Seeing a resemblance of a celebrity’s face in rocks, clouds or even food, may make us think we are either going crazy or overly obsessed with a person who will never know we exist. This tendency of seeing faces in objects is just a normal psychological phenomenon called Pareidolia, which causes us to see a vague or random image as something significant. It is all fun and games until a creepy face or a person is spotted floating at the fireplace. Nobody wants to see faces and bodies hovering in smoke, fire or inside burning objects. It is however surprising to know that there have been some Pareidolia images that left viewers happy and inspired. 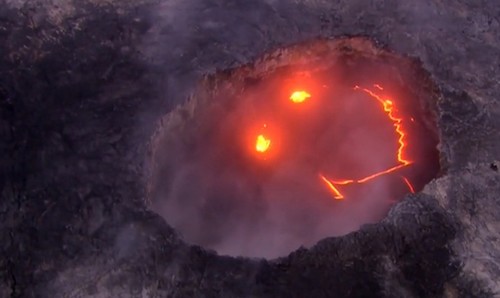 In 2016, the Kilauea volcano in Hawaii, erupted and made headlines, when a smiley face appeared from lava that was emerging from the Pu‘u ‘O‘o vent. Since 1983, Kilauea has been one of the most active volcanoes in the world but it seemed that it felt it was not been noticed enough, that it decided to attract more attention by smiling for the cameras. Strangely the smile appeared at the exact moment as Mick Kalber of Paradise Helicopters Tour Company was flying overhead, where he captured the image. Unlike most pareidolia images, this one apparently has a scientific explanation. According to the Hawaiian Volcano Observatory, spattering of molten lava can create bright spots on the dark-colored, semi-solid lake surface. Circulation of the lava can also cause the surface to pull apart creating lines that reveal the brighter lava beneath. They said that this incident just happened to occur in a pattern – a statement scientists use when they cannot explain something.

In April 2015 the Calbuco volcano in Southern Chile, which had been dormant for 40 years, erupted and let to an appearance of a mysterious ‘god’ like cloud over the mountain. The figure was said to have a height of 1000 foot, and from the images it was clear to the residents that there was a body and a head complete with eyes and a nose. The figure looked the same in all pictures, which were actually taken from different angles, a testament of its ability to pose for all cameras involved. In Chile there are several myths associated with volcanoes, so to the residents, the figure a sign or a message from the gods. There is a myth that says that volcanoes are members of ancient royal families fighting evil forces. Locals said that it might be a sign that either God was unhappy or He was keeping a watch over their behavior. The occurrence was more mysterious considering the fact that the eruption was not anticipated by the government or scientists. 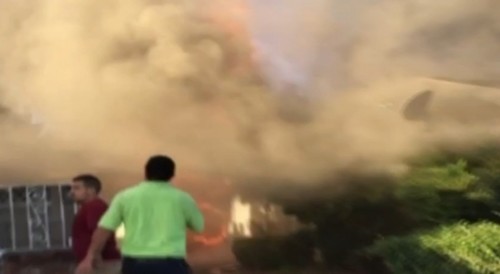 At a fire in Fresno, California in October, 2014, a pair of women filmed a fire rescue mission. In the video the face of Jesus is seen in the smoke as the building went up in flames. It was clear there was a face there though it can be argued that it was anybody, but when a few people who witnessed the fire were asked who they see; they did not hesitate to say it was Jesus. What was surprising was the fact that the face appeared as a man was being rescued from the fire. In a quest to find out whether that is how Jesus actually looks like, a local Catholic Monsignor was asked for his opinion of the sighting. He said that the true face and image of God was the man carrying his neighbor out of the fire – we need to look for that guy. Coincidentally and probably miraculously, nobody was injured according to the fire department. 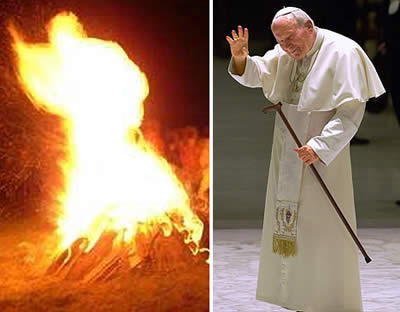 In 2007 Italian and Vatican television stations showed a picture of what seemed to be an appearance of the late Pope John Paul II in flames. The picture was of a bonfire and the crazy part was that the bonfire had been built at the Pope’s memorial service. But wait, there is more. The service was being held near the Pope’s birthplace Beskid Zywiecki in Wadowice, Southern Poland. The image was captured by a photographer Gregorz Lukasik who showed the picture to a local bishop. The bishop seemed to agree, saying that the late Pope was making pilgrimages in his death. A Vatican News Service Director Father Jarek Cielecki, who also happened to have a been a close friend of the late Pope on seeing the picture, said that it was clear there was an image of a person in the flames who he thought was Pope John Paul II. There were many skeptics to Pope’s comparison; some people saw the musician Pete Townsend and cricketer Graham Gooch while others saw The Virgin Mary. 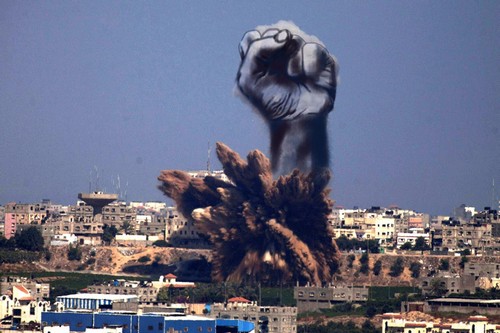 When Israeli airstrikes attacked West Bank and Gaza Strip, the only thing that people saw were thick plumes of grey and black smoke rising into the sky. This was until a group of creative Palestinian artists found inspiring images lurking in the smoke. They spotted and drew symbols of hope from the photographs that were taken of the rocket explosions. The overlaid drawings of the images which were first posted on Facebook and then circulated to other platforms, were made as a form of resistance by the Palestinian artists to Israeli aggression. In one image by Belal Khaled, a plume of smoke reveals a fist with an extended index finger, which is a gesture Muslims make when saying, “No God but Allah”. In another image Tawfik Gebreel saw a strong clenched fist rising from an explosion. Perhaps the most inspirational image was by Bushra Shanan who saw a mother carrying a baby from an explosion. 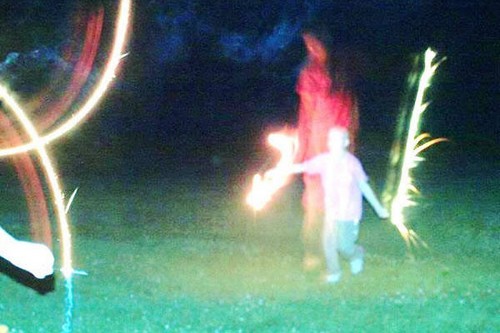 In 2013 Kevin and Jeni Potter from Kirtland, Ohio made headlines when they were mentioned by President Obama in his acceptance speech for his second term. They were also honored the year before when Kevin got a chance to introduce Obama in a campaign at Mentor High School on November 3rd. This was after the then president had met the family and heard about the story of one of their daughters Erin. Erin had been diagnosed with cancer three times but at that time she had been declared cancer free. There was more to that story. Before she underwent the transplant procedure that set her cancer-free, a picture was taken of her running with sparklers at her backyard. From the picture there appears to be a humanoid figure standing behind her, who people thought was either an angel or Mary. Kevin took it as a sign that they were not alone and that something powerful and special was there with them, while Jeni’s immediate reaction was that it was Mary and that their prayers were being heard.

4. Our Lady at Melrose Park 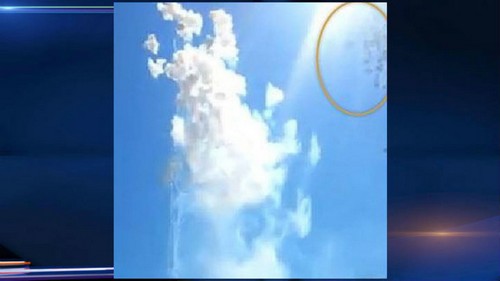 The Parish of our Lady of Mount Carmel in Melrose Park, Illinois, has been celebrating the Annual Feast of Our Lady of Mount Carmel in the month of July since 1894. The three day celebration involves a mass, concert, lighting of fireworks and a procession through the streets of Melrose Park. While a group of worshippers were commemorating the Feast, a mysterious figure appeared in the sky in July, 2014. It appeared during the day at a fireworks display and the image was posted on social media where people commented by calling it beautiful and amazing. Wait, fireworks during the day, why? Anyway worshippers said they saw the outline of a Madonna, which is a depiction of the Virgin Mary. The festival seems to have a reputation for miracles as told by Gabe Caporale a resident of Elmwood Park, who had been attending the celebration for 60 years. He said that he experienced something special on July 17, 2016 when during a mass service, there was a heavy storm outside that would have made procession difficult to hold. When the mass ended, the sun came up immediately and they were able to have the procession. Am still searching for an explanation as to why fireworks were lit during the day. 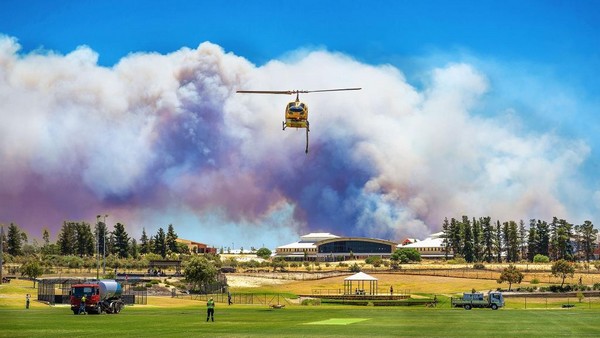 In January, 2015 a crazy fire hit the neighborhood of Bullsbrook in Perth, Australia with flames said to be higher than rooftops. The fire which burned over 6650 hectares of land and could be seen 68 kilometers away was different in many aspects: first it was said to move faster than expected, secondly, residents said that it snuck up on them – like they expected an introduction of some sort, and third, a ‘fire angel’ appeared hovering over the smoke. The image which was captured by Josh Lourenco from Yanchep Volunteer and Fire Rescue, appeared to be of an angel of fire who had maybe come to assist the 300 firefighters on the ground. While sharing the image online Krisstine Foote thought that her late father might have been present at that time. She said that her pop, who they had lost the year before, had been a firefighter for over 20 years and this was the first big fire he was not around to fight. She felt that the ‘fire angel’ might be her father, who had come to assist in the firefighting efforts. 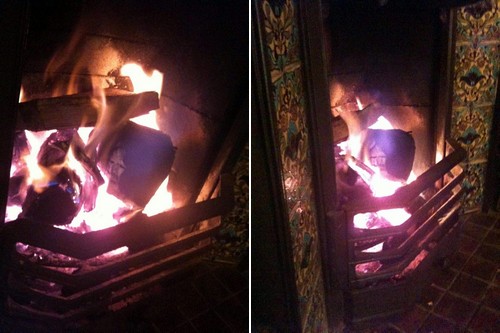 “You can see two eyes, a nose and moustache”, these were the words of Rob Millist, a 29 year old from Church Street in Welwyn, Hertfordshire, when describing a face he saw in one of the logs at a fireplace. He saw the image, at his partner’s mother’s home in Old Hatfield, Hertfordshire, in February, 2010. He walked into the living room when his partner’s mother, Judith Bailey, 56, was fanning the flames and immediately pointed out the face.A neighbor Patrick Rodgers, 51, was coming over to say hello and while he was knocking he heard them all screaming. They took Patrick to see the face and he was surprised that it was the only ash around the log and it had formed the iconic image. Rob said that everyone he showed the image was shocked and he was glad that he took the picture. At that time Rob was campaigning against an incinerator being built in the county and he felt that the appearance of the face meant that Jesus was opposing the incineration too. 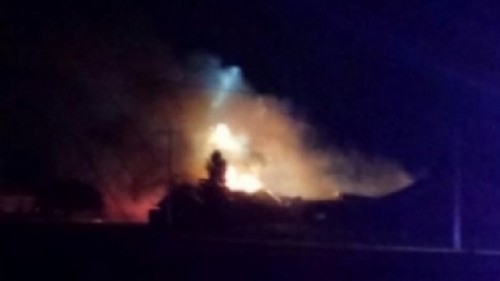 The sight of a burning church to congregants is a sad affair, until an angel is seen flying on top of the fire. This was the case at Faith Church on Old Chillicothe Road in Fayette County, Ohio, on 30th August, 2015. A photograph was taken as the church was burning and in it, a blue angel can be seen hovering above the flames. Bret Knicely whose son took the photo said that the image was giving them some sort of a sign. Another member of the church Rebecca Maynard said that God works in mysterious ways and the sighting was a level of protection at a time when their church was facing destruction. She felt something good may come out of the situation. Joshua Hobbs from the State Fire Marshal’s office said that the image could be caused by a high-powered flashlight or an optical illusion brought about by a mixture of high heat and metal materials. He however said that the theory of an angel appearance may be true as bibles are known to survive the worst fires, he was therefore not going to question anything related to the church. I mean who would dare question a Christian theory after seeing an angel.