Circus at one time was a thriving business employing the greatest of human skills for the entertainment of common folks. Before the technological overhaul, circus was one of the few magical delights a common family could experience together. Though dark days have befallen over the circus industry now but, in the past they were not free from their share of darkness and death. Here is a list of 10 dreadful circus accidents from the past: 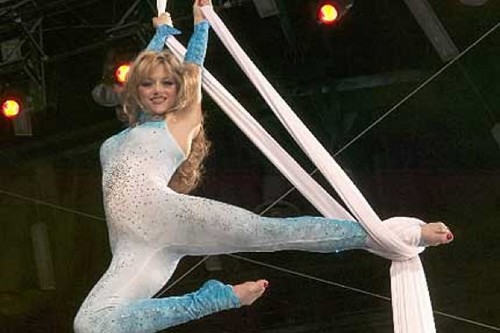 She was a prominent circus performer and a heartthrob of the audience. She had even held a Guinness World Record for twirling 75 hula hoops at once. This Bulgarian-American came from a family of circus performers and live a very successful and fulfilling career until her tragic death in 2004. Particularly know for her beautifully performed ariel acts with chiffon scarves, she, unfortunately died, while performing that. But the glitch lied in technical mechanism which failed to hold the chiffon in place, sending Espana 30 feet down on the ground. She had landed on her head. 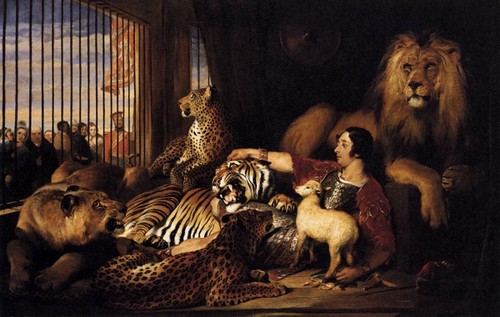 Thomas MacCarte, better known as Massarti, the one-armed lion tamer was a brave hearted man who having already lost one arm to the lions was still in the business. It was while performing in Bolton on January the 3rd, 1872 that he was mauled to death by lions in front of hundreds of audiences watching helplessly. Massarti was nearing the end of his act when one of the lions named Tyrant seized him by his hips, another lion sunk his teeth into his ribs and yet another one ripped open his scalp, leaving his skin hanging down his neck. All this happened while Massarti tried to rid himself by jabbing at the animals and the police firing blank rounds. Just when the circus attendants managed to drive three of the lions away with the help of heated irons, the fourth lion dragged Massarti into the cage. Eventually he was brought out of the cage and taken to the infirmary where he died. 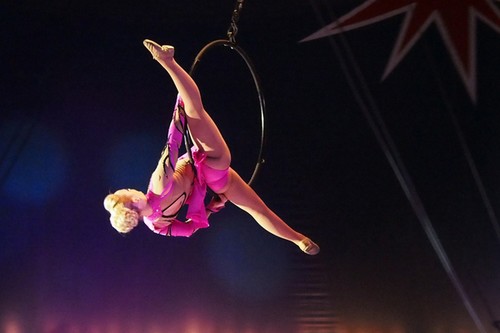 It is already known to us that all the training in this world and all the talents the performer owns cannot save her/him in case of a mechanical failure. The trapeze being one of the most dangerous circus acts around, enacted by two of the most daring and often reckless trapeze performers of their time, Fred Lazelle and Billy Millson, was almost sure to meet a sorry end. In 1872, owing to technical fault they crashed to the ground and on top of another gymnast named George North. They suffered injury – Millson’s ribs were broken and North suffered internal injuries – but fortunately survived. 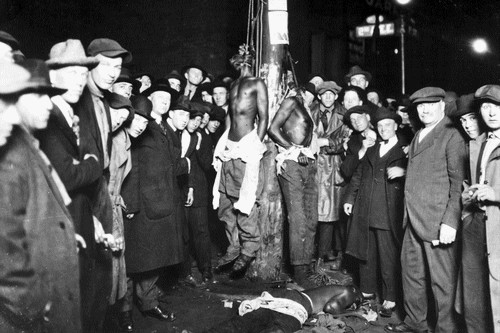 June 15, 1920 is a sad reminder of the dark corners in American history when a 19 year-old Irene Tusken went over to watch the African-American circus workers load the circus wagons and was raped by six of the James Robinson Circus employees. The police quickly arrested several black men accused of committing the crime on the white woman. This occurred at a period of heightened racial conflict across the country. In the evening a mob broke into the jail and following a mock trial, declared Elias Clayton, Isaac McGhie and Elmer Jackson guilty. And taking them out of the jail, the mob lynched them on a light pole. Later the black community called for justice but the lynch mob was only lightly punished. 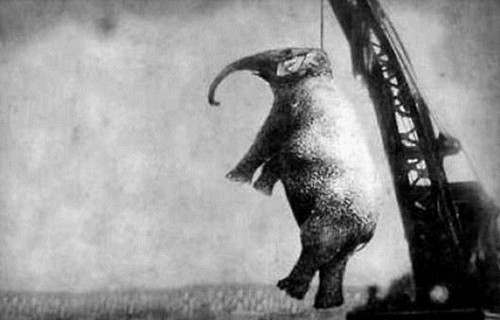 On September 12, 1916, Mary the circus elephant, for some unsolved reason, squashed her handler into the ground. Since then, wide conjectures have been made as to the reason behind her behaviour; some saying she was mishandled and poked at by the handler, Red Eldridge to the point of infuriation, others say that she was just bored to death and wanted to do something exciting. Whatever the reason may be, there was such a mass outrage at the incident that the people demanded revenge and the following day Mary was hung by her neck with the help of an industrial crane to an audience of 2,500 people (consisting largely of children). Being too heavy the chain snapped with Mary falling on the ground and breaking her hip. She died slowly after being hung for the second time. 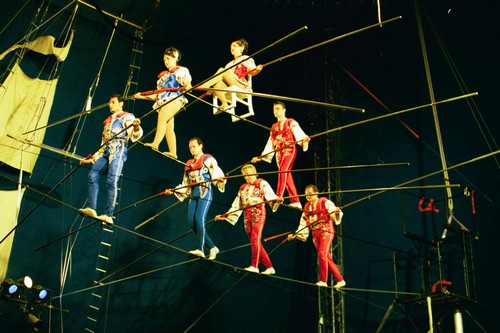 The Wallendas family were the greatest of acrobats associated to circus for several years and were popularly nicknamed as the ‘Flying Wallendas’. The head of the family Karl Wallenda had pioneered an acrobatic act called the Seven-Person Chair Pyramid involving seven of the family members were including Karl’s wife Helen Kreis and his brother Herman. In this act seven dare-devils would have to balance on tightropes and a chair, 32 feet above the ground. Since, they never used safety nets, a tragedy befell on the family when the lead man faltered they all crashed into the ground. This occurred in 1962. Richard Faughnan, the Wallenda son-in-law, and Dieter Schepp, Wallenda’s nephew died while Wallenda’s adopted son, Mario’s lower end of the body was paralyzed.

Failure of breaks caused a huge collision of two separate Wallace Brothers Circus in the year 1903. The first train had come to a halt and though the engineer of the second train saw the red signal, he could not stop due to failure of break and therefore the second train smashed into several cars of the first. The terrific force with which the accident occurred ended up killing several of the animals and 30 circus workers. 27 more circus workers, however, managed to escape with injuries. 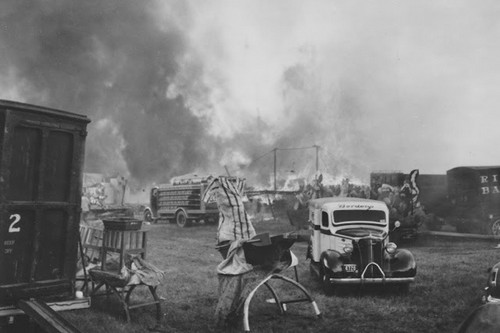 The accident occurred in 1942, causing the death of, not humans but of over a hundred circus animals. When the fire began, owing to unknown reasons, near the tent of the Ringling Brothers and Barnum & Bailey Circus, panic engulfed the whole place. While the people managed to escape the animals remained trapped and burned to death. It was estimated that more than 100 tigers, zebras, camels, lions and other beasts owned by the world’s largest circus had died in the flames that spread rapidly from bales of straw and hay. Nine cages were lost, 26 of the few surviving animals got burnt so badly that they had to be put to death. 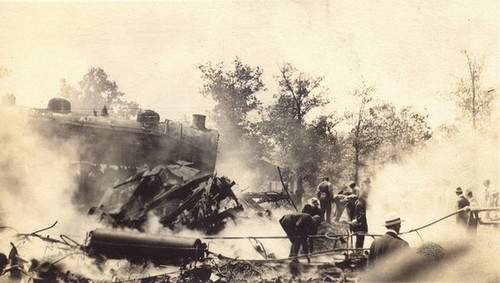 Another train wreck occurred on June 22, 1918 when the travelling Hagenbeck-Wallace Circus came to a halt for the night. The circus train held 400 performers and most of them dozed off to sleep. Little did they know that a Michigan Central Railroad troop train was heading straight towards them at 35 miles per hour. At about 4:00 AM, the troop train slammed into the circus train killing 86 people and injuring 127 more. The reason behind this disaster was that the troop train’s driver Alonzo Sargent fell asleep at wheels. Sargent, an experienced man at the throttle but had slept little in the proceeding hours. So the effect of lack of sleep, several heavy meals, some kidney pills, and the gentle rolling of his locomotive are thought to have caused him to fall asleep therefore missing at least two automatic signals and warnings. 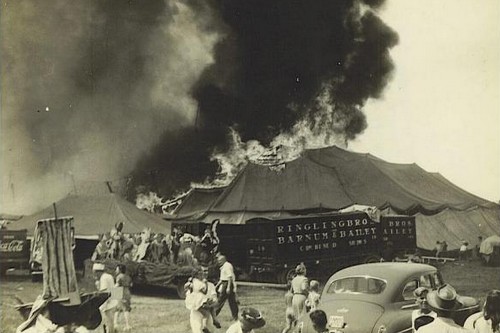 The Hartford Circus Fire, which occurred on July 6, 1944, at Hartford Connecticut, was one of the worst fire disasters that United States have seen. Although a small fire began in the southwest sidewall of the Ringling Brothers and Barnum & Bailey big top circus tent, it managed to spread rapidly owing to the fact that the tent’s canvas had been coated with 820 kg of paraffin wax dissolved in 23,000 litres of gasoline (some say kerosene), as a means to make the tents waterproof. That tragic day the circus was attended by approximately 7,000 people out of whom 700 were injured and 169 of them died of smoke, fire and stampede.