Domestic Cats, (Felis Catus) are small and furry mammals, which make great pets, unless one is allergic to them, of course. Cats are carnivores and have an average life of 14 years. They are very elegant, acrobatic animals and they keep themselves clean by licking the dirt on their fur away. Humans keep cats as pets for companionship and for getting rid of vermin and rodents. Cats have been with us humans for centuries and the many diverse ways we have depicted cats throughout history bear testimony to this fact.

1. As a Pagan Goddess of Ancient Egypt, Bastet Bastet was a much revered kindly deity of domestic cats and as per Herodotus, she was a “happy and benign Deity who brought good fortune, music, dance and joy to all.” Herodotus’ records from the 5th century BC also describes the temple of Bastet (which he calls Artemis) as the most beautiful of all temples, though others existed which were bigger and may have cost more to build.

Bastet was equated with Sekhmet, the lioness deity of war in her malignant form. As can be seen from Herodotus’ records, she was equated with Artemis, the virgin huntress, during the Greek period and became thus the protector of children and pregnant women, musicians and all kinds of excesses, especially sexual excesses. Some of her other names were Bast, Ubust, Ubast, etc.

2. As the Protagonist in an English Nursery Rhyme The “pussy cat” nursery rhyme was and remains popular with children even today, although it will be probably politically incorrect now. The rhyme went like this.

Reference to this rhyme can be found in James Orchard Halliwell-Philipps’s book “The Nursery Rhymes of England” published in 1843. There are other rhymes too involving cats such as one in which a pet cat is dropped into a well maliciously by a little boy but is saved by another little boy.

3. As a Comic Strip Character 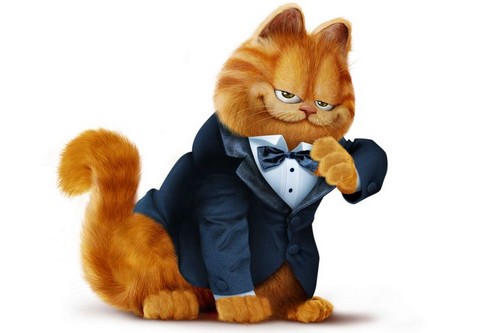 In 1978, Jim Davis first introduced his creation “Garfield’ to the world in the comic strip of the same name. The comic strip featured a fat, lazy and lovable cat “Garfield’, his master ‘Jon Q. Arbuckle’ and Jon’s pet dog ‘Odie’. Garfield soon became a big hit everywhere and Guinness World Records has declared GARFIELD as the most widely syndicated comic-strip in the world.

Garfield loves eating and sleeping, and lives a charmed life. He trades one-liners with mice but swats spiders. He plays practical jokes on Odie who is so good natured that the jokes often bounce back on him. Jon is a loser as far as the fair sex is concerned. Subtle, disinterested humor is Jim Davis forte and the comic strip’s strength. Cats especially black cats have been the victims of superstition in Europe during the middle ages, especially in England. Alley cats in England were often fed by old and lonely ladies. Thus, when these lonely, old widows were suspected of being witches, their association with cats tainted the animal too as evil and being witch’s consorts, especially the black cat.

Later, people started to believe that witches transformed themselves into black cats at night, as they went about doing their unholy mischief. The same belief was also present among the people during the Salem witch lynching in America. Today, people are still superstitious of black cats. For instance, a black cat crossing a person’s path is still considered as an ill-omen and sign of impending bad luck by some people.

5. As an Inhabitant of Wonderland which mentors Alice This is, of course, the grinning Cheshire cat with the ability to disappear or reappear, which Alice meets in Wonderland in Lewis Carroll’s “Alice in Wonderland”. It disappears slowly on the request of Alice, and the last part which is visible before it disappears completely is its grin. It is this ‘Grin’ which makes the cat special and differentiates it from the other inhabitants of Lewis Carroll’s “Wonderland”.

The Cheshire cat is a purely fictional cat and there have been many speculations as to what inspired Carroll to put the cat in the role he did. Cheshire in England was known for its local cheeses which were fashioned in different shapes, one shape being a ‘grinning cat’. As Carroll was born and brought up in Cheshire village, it is probably the cheese shapes from which Carroll drew the inspiration to create his famous cat.

6. As the Fourth House Representative in the Vietnamese Zodiac The Korean and the Chinese Zodiacs are identical but the Vietnamese Zodiac differs from the Chinese in the animals in the second and fourth houses, where the Ox and ‘the Rabbit’ are replaced by the Water Buffalo and the Cat respectively. Some Years of the cat have been 1963, 1975, 1987, 1999 and 2011 and the next cat year in the future is 2023. The Vietnamese substitution of the cat is probably because the cat protects the farmer’s crops from rodents and vermin, whereas the ‘rabbit’ serves no practical use to them.

A cat person is flexible, tender and courteous. However, someone born in ‘a year of the cat’ will generally not reveal everything they know on a particular subject but will retain back some information which they may reveal later. They like keeping secrets, being secretive by nature.

7. As the Subject of a Quantum Theory ‘Thought Experiment’

In 1935, Ernest Schrödinger, Austrian physicist and Nobel Prize winner, proposed his thought experiment of the Quantum Theory of Superposition. Schrödinger takes a cat and puts it an Iron chamber. He also places there a glass vial of hydrocyanic acid, a radioactive substance and a relay mechanism. The relay is triggered in such a way so that the glass vial breaks as soon as the decay of a single atom of the radioactive element takes place, and cyanide fumes kill the cat.

Therefore, once the box is closed, the observer has no way of knowing the decay rate inside. The cat may have died if one atom has decayed during the test but is breathing if the decay is not yet complete. Therefore, in Quantum Theory, the cat is in a state of superposition of being both dead and alive to the observer.

8. As Angels or Divine Messengers Plenty of people believe that cats which had bonded strongly with their masters and mistresses have the power to come back from afterlife, to guide their masters spiritually and inspire them. Penelope Smith in her book “Animals in Spirit: Our Faithful Companions’ Transition to the Afterlife” writes that, pets inspire us and teach us about love and joy, so when a cat appears in the spirit form, they are simply trying to complete the tasks that they could not complete, while living with their masters.

Allan and Linda Anderson in their bestseller “Angel Cats: Divine Messengers of Comfort” assures us that observation and interaction with the cats in our daily life is sufficient to obtain spiritual inspiration to live our lives. “Cats the musical” is based on T.S.Elliot’s book “Old Possum’s book of Practical Cats”. Its music composer is Andrew Lloyd Webber who has composed music for other famous musicals as Evita, Jesus Christ Superstar, The Phantom of the Opera, etc. among others. The musical is about a bunch of alley cats and the action takes place on the revolving stage showing a giant garbage dump.

The actors play different Cats each having a distinctive name and personality of its own. As with humans, there are moments of happiness as well as sadness from the feline point of view too, and this is well portrayed in the Musical. ‘Cats’ first opened in London Theatre on 11th May 1981, and is still being performed, thereby becoming the longest running musical in the world till now.

10. As a Super-Hero who started off as a Thief Selina Kyle aka “Cat woman” is a DC superhero who lives in Gotham city. She is introduced as a thief in DC Comics but later becomes an aide of Batman.

In Hollywood, Cat woman makes her first meaningful appearance in the movie “Batman Returns” of 1992. Here, Selina Kyle is played by Michelle Pfeiffer. She is a secretary of Shrek who is in cahoots with Batman’s enemy “Penguin’. One day, Selina comes to know about Shrek’s evil plans and he throws her out of the office window, to fall on the street below. A group of cats resuscitates Kyle, who drawing her energy from nature becomes ‘Cat woman’, the nemesis of all male ruffians whom she disposes off with glee and one-liners in the DC Style. Anne Hathaway plays ‘Cat-Woman’ in the latest Hollywood Batman movie, Christopher Nolan’s ‘The Dark Knight Rises’.